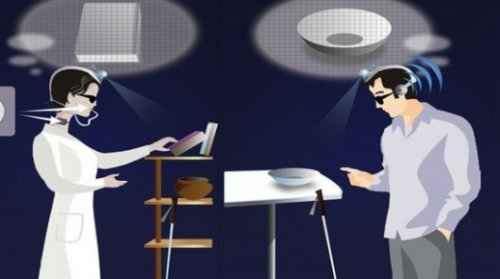 Recently, we often see prototypes or concepts of the devices based on the use of cutting-edge technologies and the latest achievements of science, by which blind people and people with sight disabilities gain the opportunity to “see” the environment
The closest to mass production of such a device is a device Virtual Cane, which using the principle of sound sonar, allows its users to “see” physical objects at a distance up to 10 meters. The device is composed of a emitter, which emits a stream of inaudible sound waves that are reflected from objects and carry back information about the size and the distance to the object. The system informs the user of the vibration oscillations, the frequency and intensity of which depends on the size and distance of the object.

Device Virtual Cane was developed by scientists from the International Canadian-Israeli Institute for medical research (Institute for Medical Research Israel-Canada, IMRIC), and the group involved in the design and manufacture of devices was headed by Dr. Amid Amedi (Dr. Amid Amedi). A demonstration model of the device Virtual Cane, which is a prototype device, which will be launched in the near future, was held in Jerusalem last month.
In addition to determining the size, elevation, and distance to environmental objects, the device in the future will be able to realize the function of face recognition, to distinguish between the smile and other emotions on the faces of people that will put it one level among the similar devices. Such device capabilities Virtual Cane appeared through the use of highly sensitive electronic circuits signal processing and complex adaptive algorithms of the control system.
According to the developers, the use of the device is intuitive and can be learned in just a few minutes of exercise. Device Virtual Cane small, easy, and the battery charge lasts for 12 hours of continuous operation.
Currently, the developers have applied for a patent and are in the stage of finding a commercial partner which will be launched devices Virtual Cane. Dr. Amadi estimates that in the case of mass production, the device Virtual Cane will only cost you about a hundred dollars.