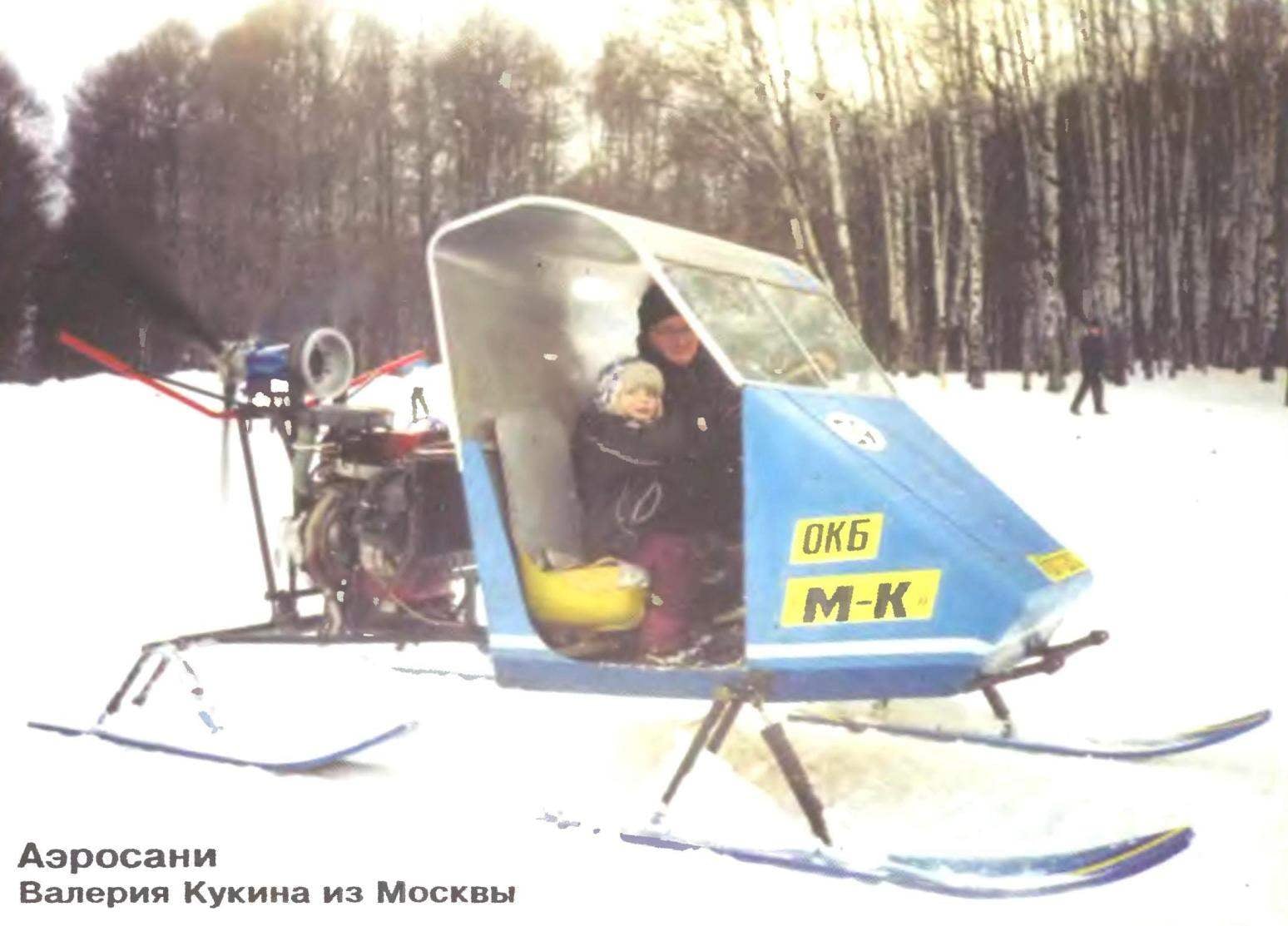 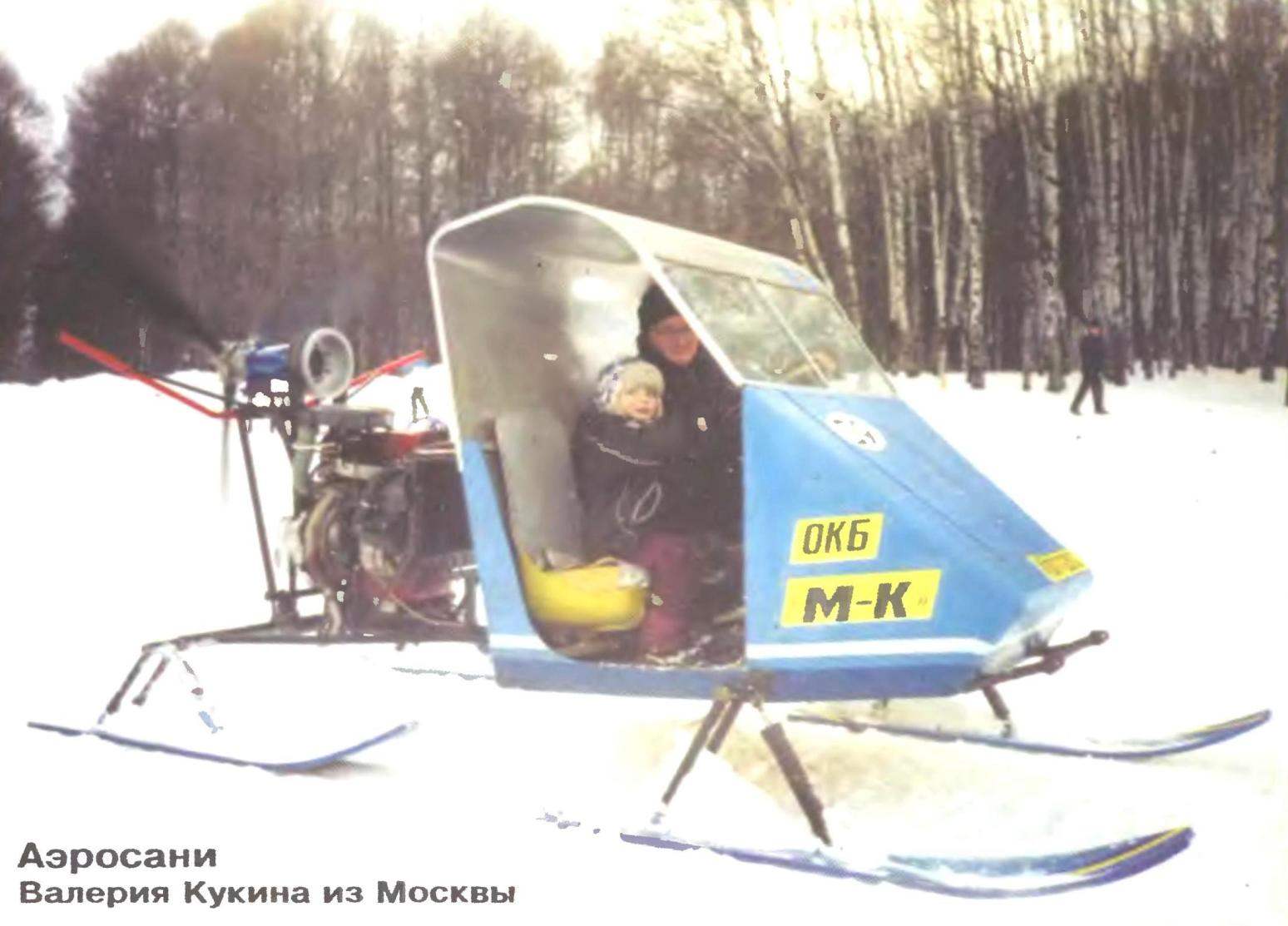 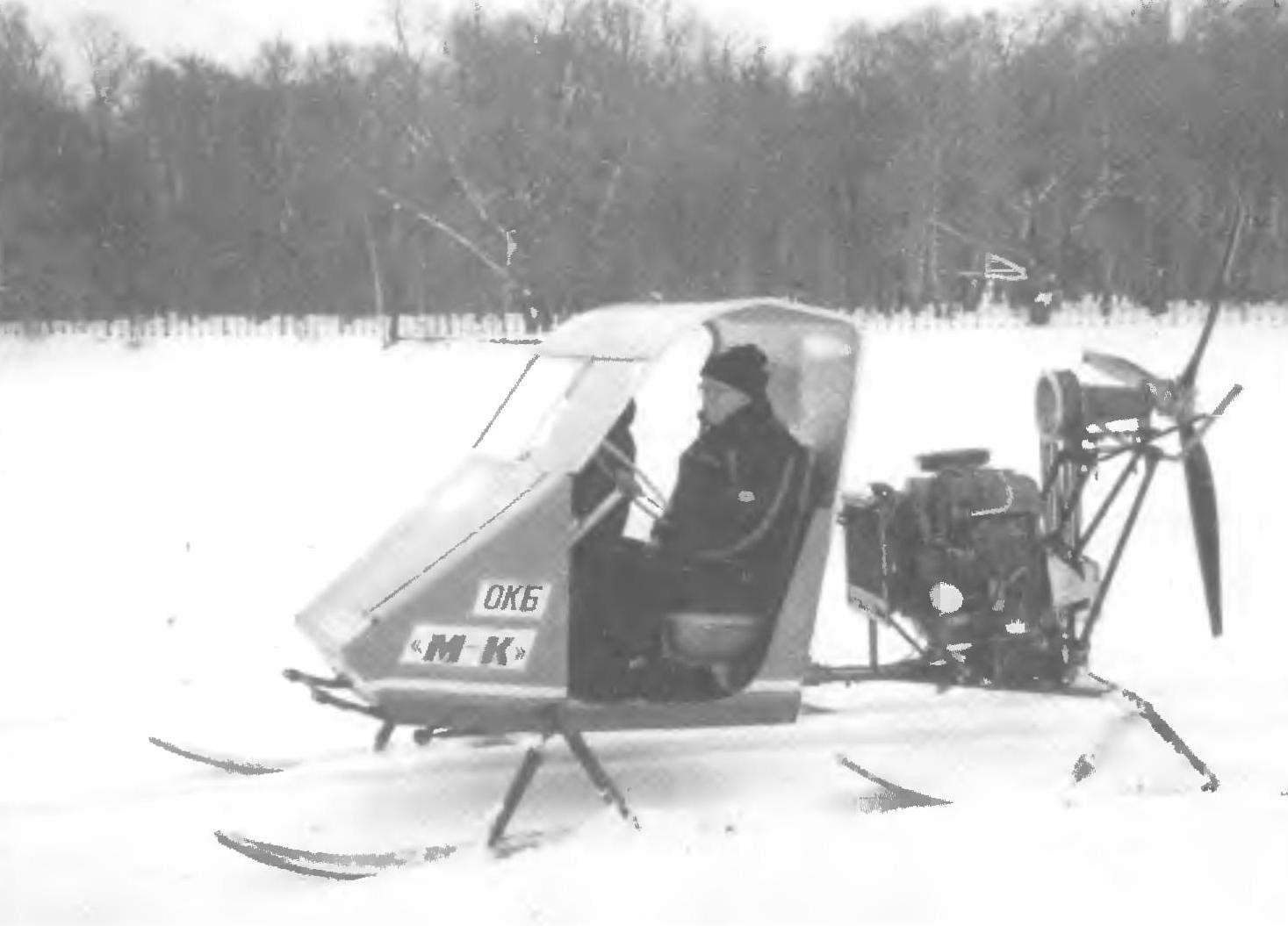 all-terrain vehicles — my long-standing and continuing fascination. For more than thirty years in my spare time I design and build different all-terrain machine. But a particular fondness I have for snowmobiles: motomartin and snowmobiles, although both of them prefer the latter. Probably because he once graduated from MAI (Moscow aviation Institute) and worked at the firm Dry. The snowmobiles and airplanes, as you know, “utilize” such a power unit rotor.
I started with creating a tool and machine base. At the request of the editorial Board of the journal “modelist-Konstruktor” back in the 1980s, the housing authority has allocated me in the basement room, which I equipped for a small workshop and started to work. Then there were the volunteers — the guys from our and neighboring houses. I have tried to develop their interest in technical creativity, and I think I succeeded. In the future, almost all of them linked their lives with the aircraft, a graduated from the aviation Institute and are successfully working in design offices and aircraft manufacturing firms.
I remember how difficult it was given the first snowmobile — the effect of the lack of experience in creating these machines. Special literature did not exist. Thanks to the journal “modelist-Konstruktor”, which I discharged for a long time, or rather since its emergence in the mid 1960-ies. Even then, I found a lot of useful information, not only on the part of the snowmobile or other equipment.
On that snowmobile I spent a two-year time and hard work. But even the first pancake not turned out lumpy was a workable machine.
The snowmobile had closed double cabin. All four ski was manageable, but because the rear was strictly for the front track, greatly reducing the drag compared to trechaleidae (trehmernoi) scheme.
Engine — heavy motorcycle M-72: 2-cylinder, opposed, air-cooled, power 22 HP, two-bladed Propeller with a diameter of 1250 mm. With this powerplant snowmobile was accelerated to 50 km/h. 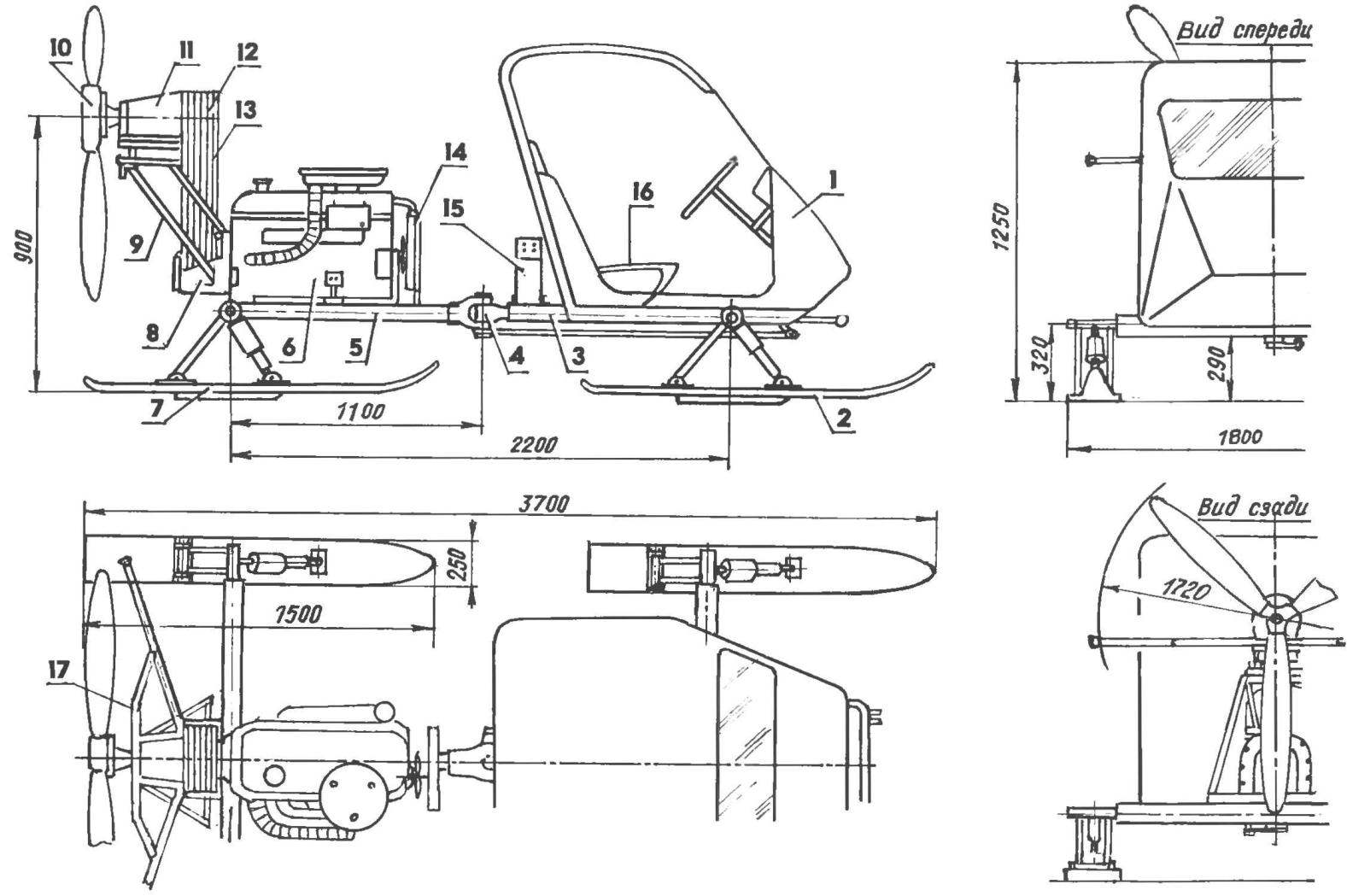 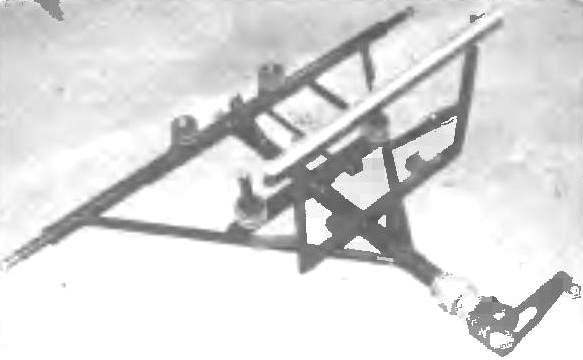 Back of the frame with a rack radiator 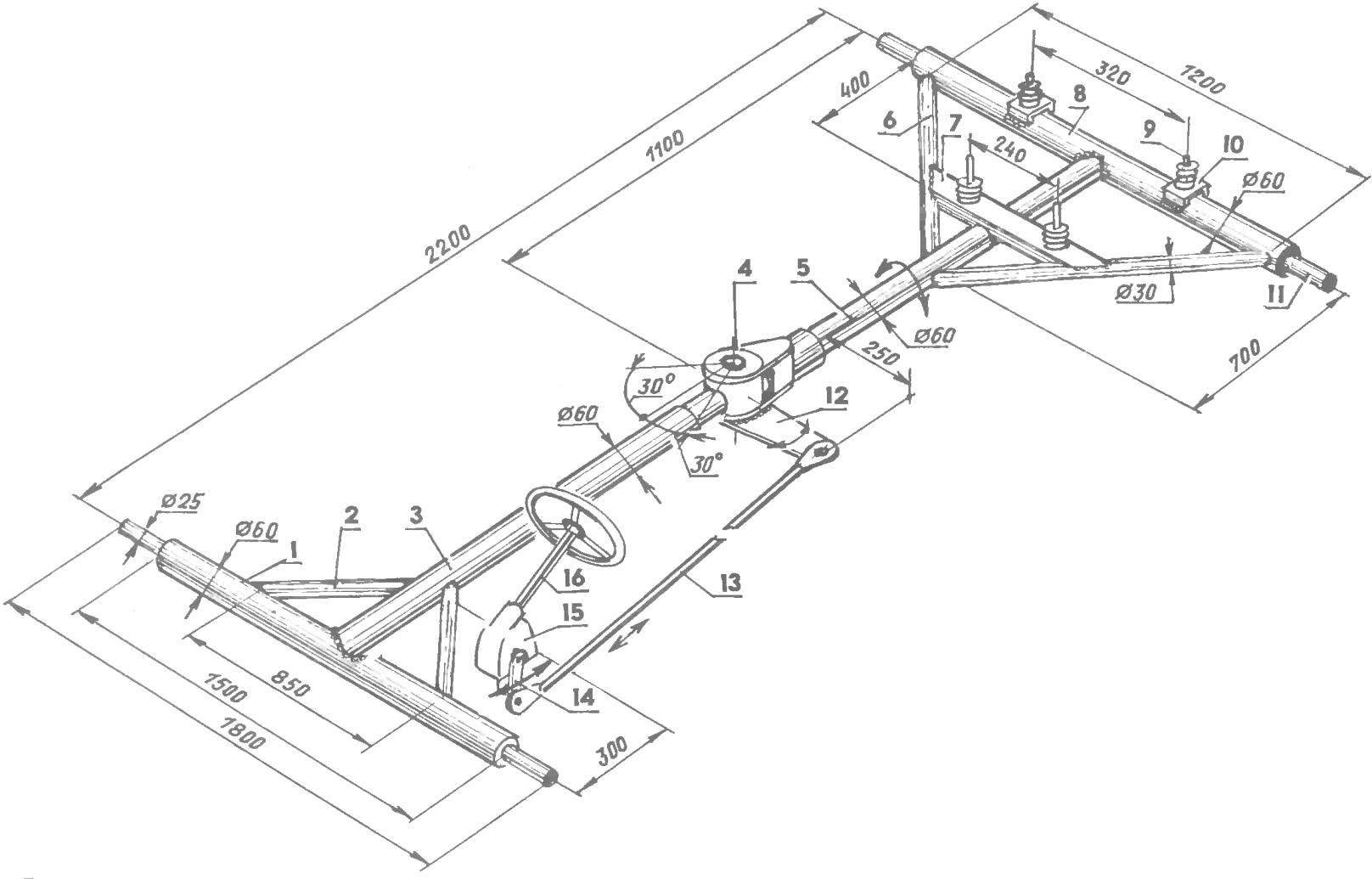 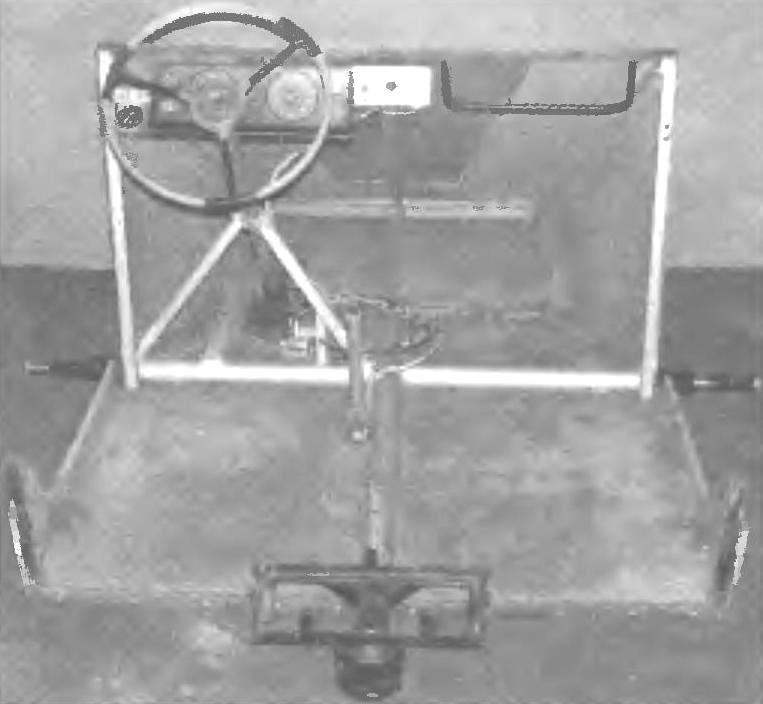 Front of the frame to set her cabin part

The Node driving pulley in the clutch housing:
1 — drive pulley Destructivos profile of the stream under the V-belt type A (made of anodized aluminum, round 140); 2 — flywheel; 3 — a cranked shaft; 4 — front centering sleeve (St3, round 35); 5 — M10 screw (with spring washer) securing the pulley and flywheel to the crankshaft (6 PCs); 6 — the block of cylinders of the engine; 7 — the screw fastening the clutch housing to the engine block (normally, 5 PCs.); 8 — clutch housing (modified); 9 — screw M6 spring washer mounting axle flange to the drive pulley (6 PCs.); 10 — the cover (front side from the transmission BA3-2103); 11 — axle (steel 45, 120); 12 — bearing 180506 (62x30x16 — Dхdхb); 13 — screw M8 mounting washer-nozzles; 14 — washer-cover plate (St3 sheet s3); 15 — rear centering sleeve (St3, lap 75); 16 — screw M10 spring washer securing the cover to the clutch housing (6 PCs.)
Good luck, as you know, inspires. But because there was a desire to make a design with improved driving characteristics. It was the so-called “aerolia” — snowmobile ski with one large Central and two small lateral (support). Management was carried out by two profiled blades mounted on the sides of the Central skis and put forward below her soles. “Aerolia” with the same rotor setup was developed for 70 km/h.
However, the “old disease” — a low-power air-cooled engine and such a lightweight design and at a sufficiently high speed even in a decent frost still overheated.
The problem was solved with the acquisition and installation of the “aerolite” charged (but restored) aircraft engine “Walter Minor 4-III” in Czechoslovakia. Power of the motor in more than a hundred horsepower enough now to tow a hang glider.
No matter how good was “Walter” but exhausted its resources and difficulty in acquiring spare parts has delivered another goal is to make the snowmobile with an affordable, powerful and reliable liquid-cooled engine.
For publications in “Modeler-designer” of the history of the snowmobile, I knew about the successful use of them on the car engines. Military in 1941 was designed and mass-produced combat snowmobile RF-8 with the engine GAZ-M-1. Modern car motors for reliability and power density has gone far ahead, the Most suitable for snowmobiles see motor Zhiguli 2103 — among motorists, it has proved to be the best.
Another model snowmobiles (with the next generation homebrew — son) decided to do with the above mentioned engine VAZ-2103 chetyrehlistnyj according to the classical scheme, but with “broken” frame.
The frame of the snowmobile though unusual for these machines, but the design is quite simple, and primarily because flat. It consists of two similar T-shaped half-frames: front and rear. Front mounted cab and rear — power unit. The cabin has its own frame and rotor installation constructed on its own subframe. Due to this, the cockpit and engine can be mounted on the articulated as standalone modules.
The basis of each articulated serves as a Central spar and cross member made of steel thick-walled tube with a diameter of 60 mm. At the free ends of the spars are mounted mate swivel, by which the frame can “break down” at an angle 60° — 30° in both directions, thereby realizing appropriate rotation of the machine or the reverse. T-shaped connection of the spars with the traverses are reinforced by struts. In addition,polurama welded additional elements that do not influence particularly on its stiffness and strength, but necessary for mounting them on the cab and rotor installation. And again. For unloading of the frame from the torsional moments and the exception hang of skiing over rough roads the rear of the frame has the ability to rotate about the longitudinal axis. To this end, the hinge provides a bearing unit.
Picture hinge Assembly and its pattern have inessential differences are possible options.
In the process of assembling snowmobiles to the longitudinal front half frames were still welded area of the battery, and the rear strut for mounting the radiator. But these elements are out of power and in the drawing frame not included — they are clearly visible in the pictures.
The design of The chassis of the snowmobile ski, four wheel, two-track. All four ski the same. Is laminated from five layers of 4 mm plywood on epoxy glue. The soles of the skis lined with low density polyethylene of thickness 4 mm. in the Middle of the ski attached to the dural that undercuts of the brand, and the edges — edging from the same area is 25×25 mm. suspension arms are made of welded tubes: stand — of square (30×30 mm) and sleeve — round with a diameter of 45 mm Each pendant ski with a spring-hydraulic shock-absorber from a heavy motorcycle “Ural”. Ski the upper bushing of the lever is suspended on the axle of the frame. 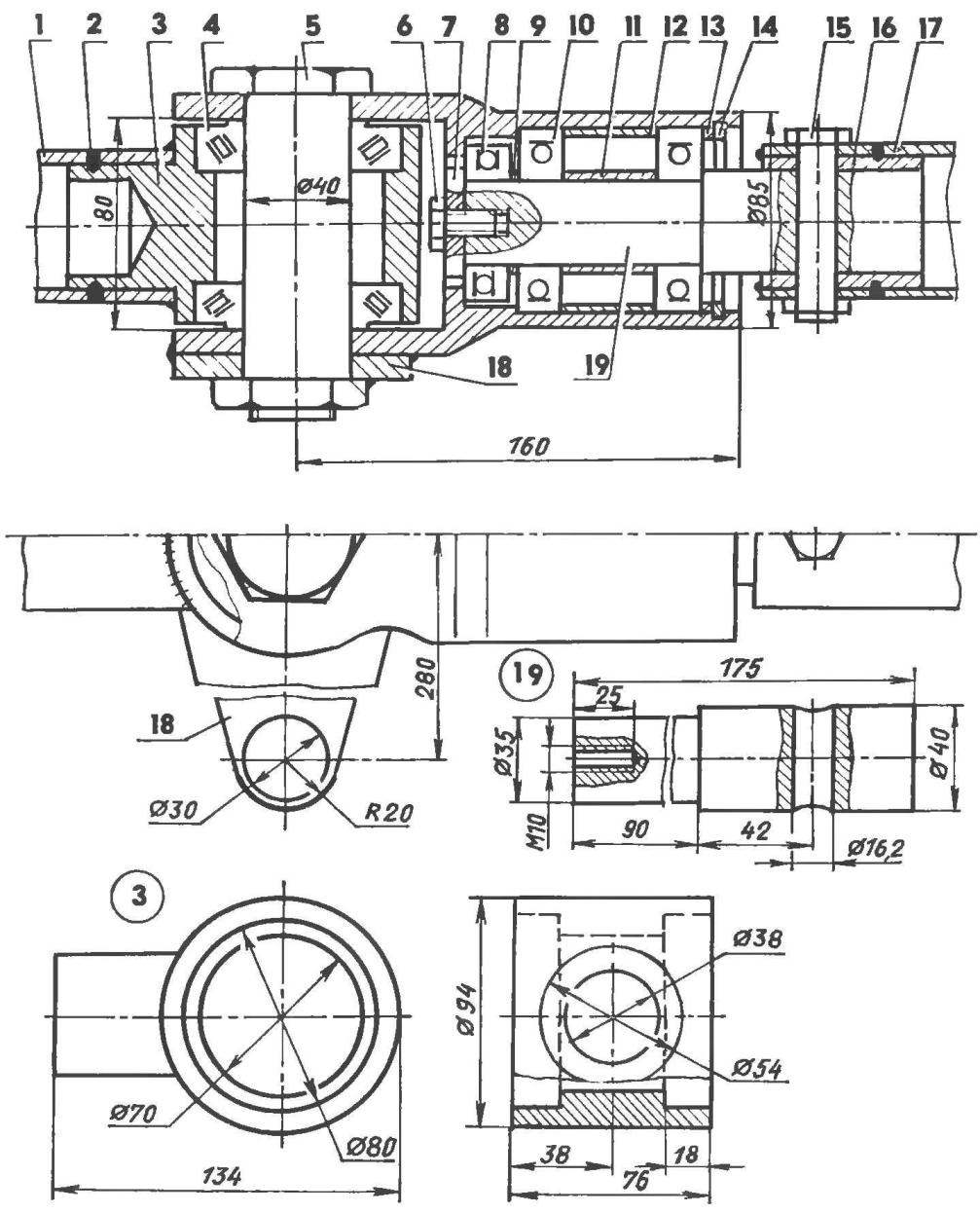 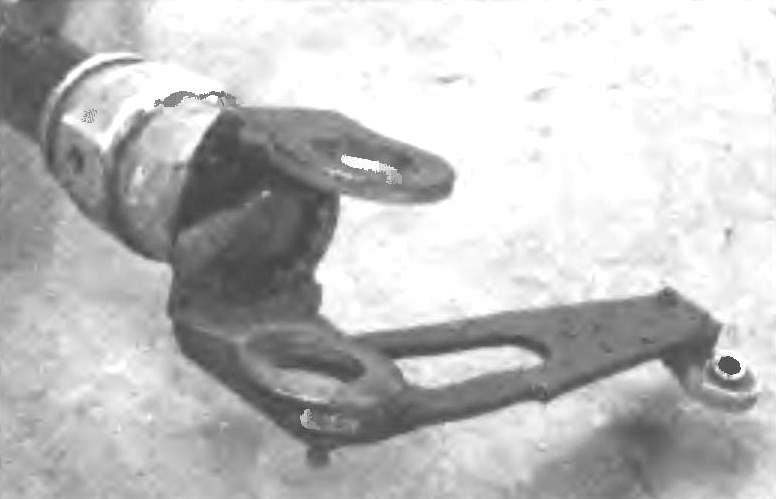 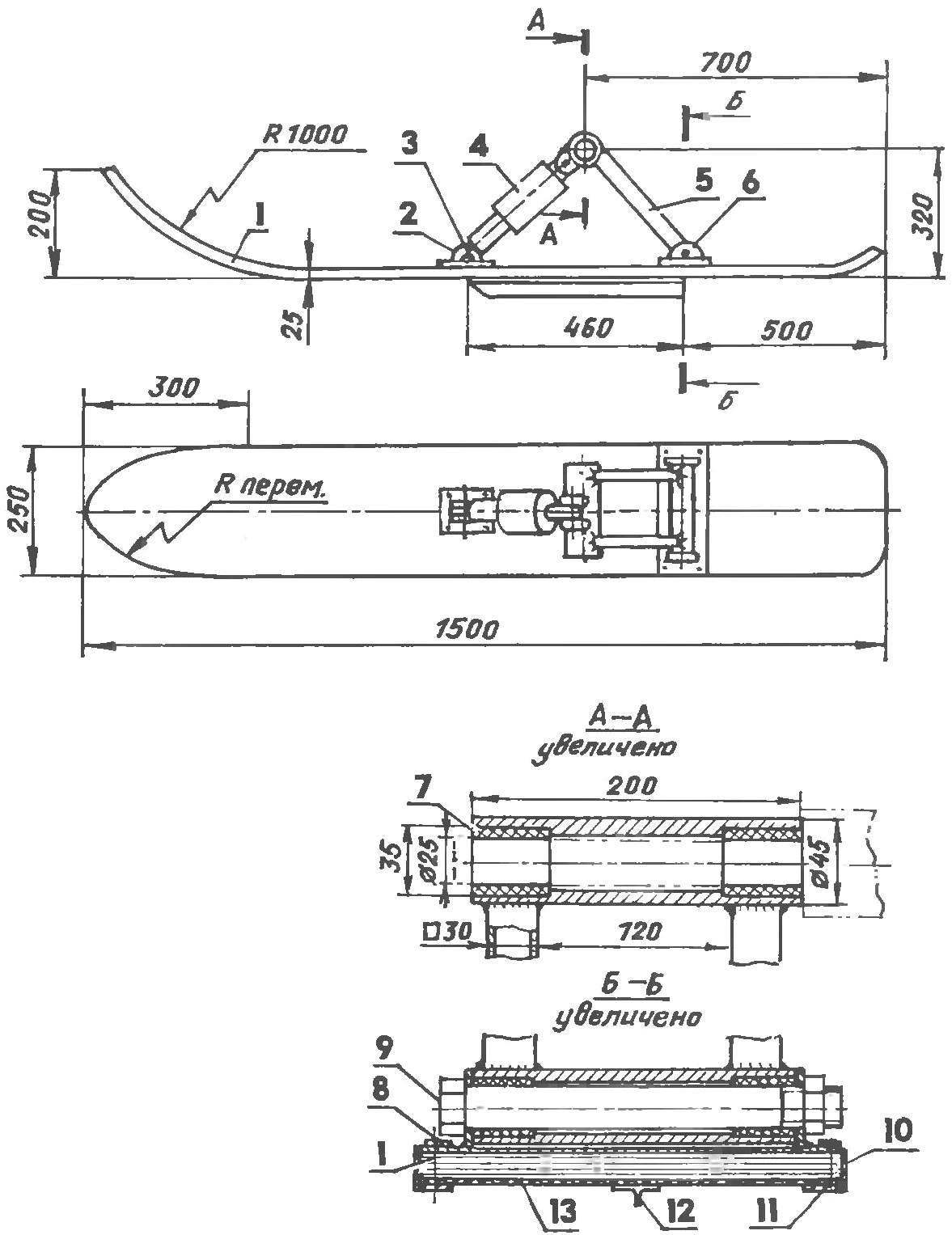 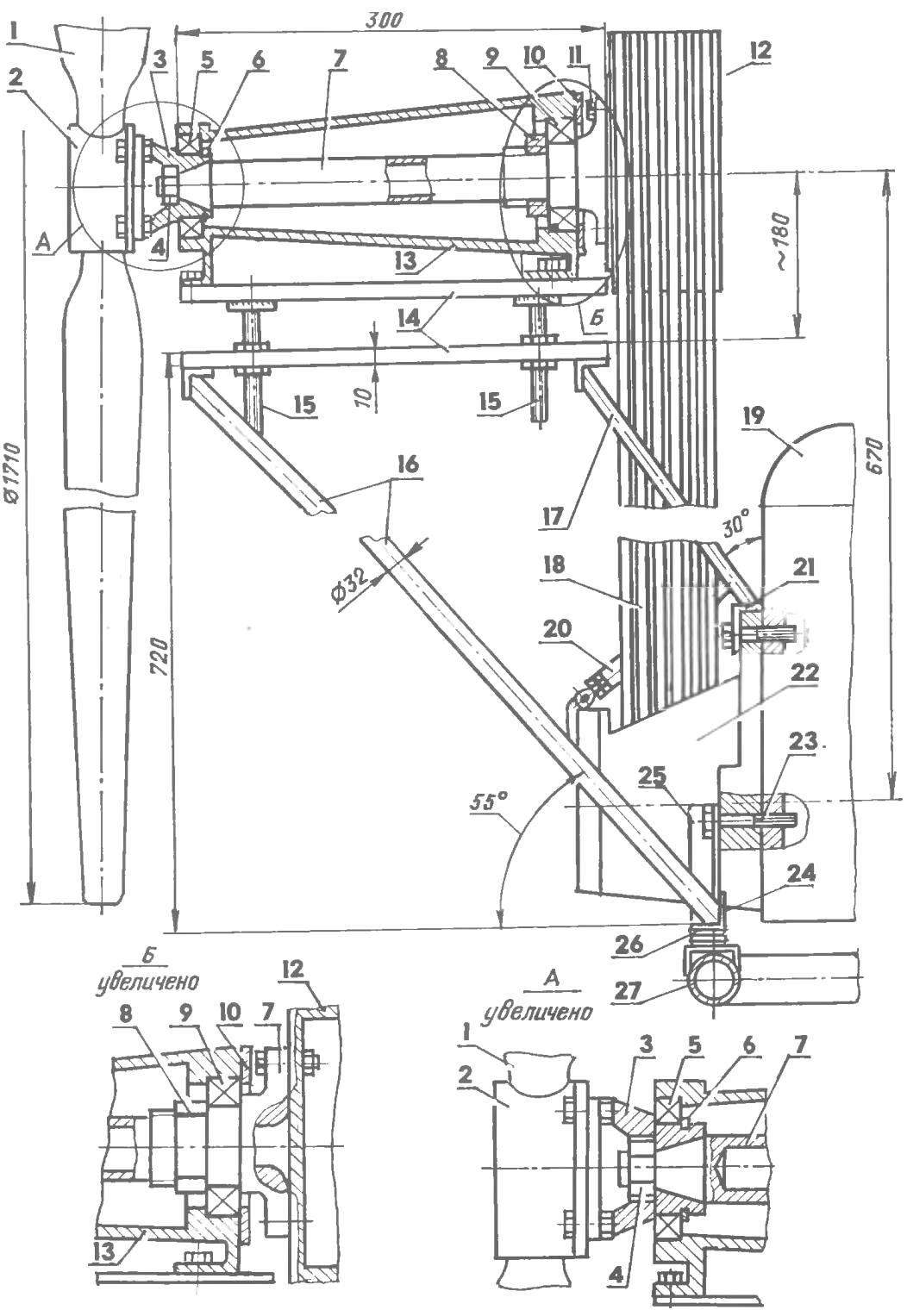 Rotor installation. The mounting of the bearing unit of the screw on the subframe:
1 — screw; 2 — propeller hub; 3 — small flange of the screw shaft; 4 — nut M20 flange mounting; 5 — bearing 180110; 6 — the bearing retaining ring; 7 — the screw shaft; 8 — a nut of fastening of the bearing; 9 — the bearing 180508; 10 — cover housing bearing; 11 — the M10 bolts of fastening of a pulley and a large flange of the screw shaft (6 PCs); 12 — slave pulley; 13 — the bearing housing; 14 — supporting the movable platform; 15 — adjusting bolt belt tension (Ml6, 4 pieces); 16 — long brace (steel pipe O32, 2 items); 17 — short brace (rough steel O32, 2); 18 — drive belts (A-type, 6 PCs); 19 engine; 20 — lanyard; 21 — support the short cross braces (area 60×30); 22 — Carter with drive pulley; 23 — bolt M10 mounting frame to the drive unit (4 PCs); 24 — supporting cross member of the long struts (area 60×30); 25 — front (area is 40×40, 2); 26 — the pillow; 27 — crossmember rear articulated
Cabin snowmobile double seat, driver and passenger placed next to each other. Frame cabin built from duralumin tubes with a diameter of 16 mm. Sheathing and floor — plywood. Front windshield — motorized С3Д. The cab to the front frame is attached at four points through rubber shock-absorbing airbag.
The main module snowmobiles — propeller installation — consists of motor, V-belt transmission and the propeller.
Engine as noted earlier, is used from the car “VAZ-2103” without alterations. From the same car taken off the clutch and even the mechanical part of the gearbox. But in place of the clutch now installed Destructivos drive pulley belt transmission (transmission ratio i = 2) Belts — profile type A. For them at the top of the case cut window. And to maintain the strength of the body housing, the rear cover is subsequently pulled to the engine lanyard.
A drive pulley attached to the flywheel and sits with him on the output shaft of the engine. But for relief of the bearing of the output shaft of the engine to the pulley on the outer side is attached a short axle flange. The end of The axis installed in bearing 180506. The body of the bearing mounted in the end cover from the transmission.
The driven pulley placed on the same shaft with a propeller on the opposite end. The shaft is mounted in two bearings: one (180110) side of the pulley, the other (180508) is from the screw in a single package.
The engine, to lower the center of gravity of the sled, placed directly on the frame on four rubber shock-absorbing pads and the bearing housing with the driven pulley and the screw above the motor of the specially made subframe. To tension the straps as they pull the site rises higher. 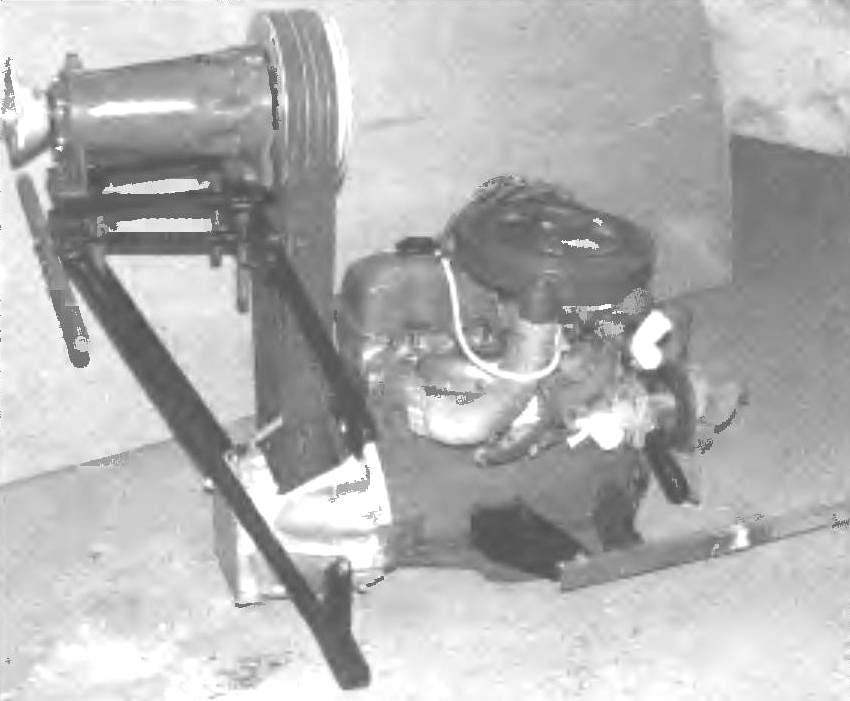 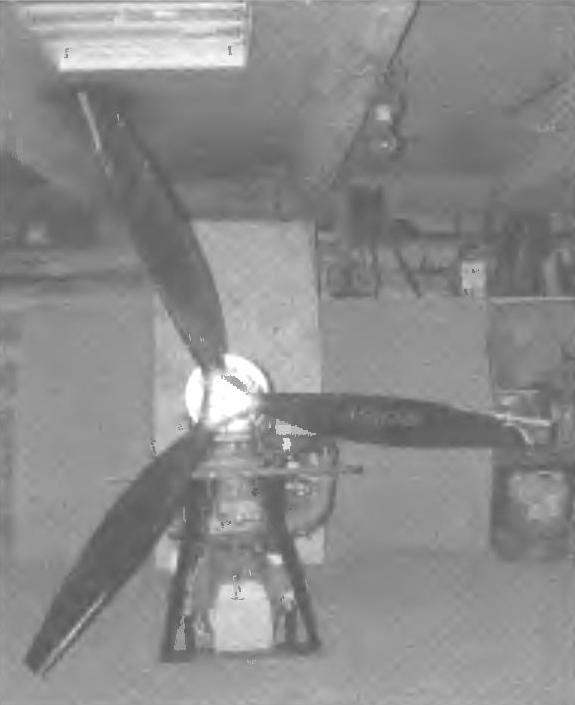 propeller
Together the units make up the Autonomous propeller driven propulsion unit and, if necessary, can be removed from the snowmobile and installed on another vehicle, such as a boat, turning it into a hydroplane.
The propeller snowmobiles — propelling three-bladed, fixed (variable) step is from 700 to 1100 mm, with a diameter of 1710 mm, industrial manufacturing. Prior to this was a homemade two-bladed. He remained from propeller driven power plant with the engine of the motorcycle M-72. But with the engine VAZ-2103 screw worked even worse than the motorcycle, and had to be replaced.
The most important element of safe operation of snowmobiles — fencing of the propeller. On my machine it is overall, tubular. But in the future I think to replace it with an aerodynamic ring nozzle. This presumably will increase on 10 — 15% of the thrust of the screw and to protect the propeller from damage by tree branches.
Electrical equipment snowmobiles standard and consists of battery, generator and starter.
Controlled snowmobile with a steering wheel via a worm gear with a bipod and a steering rod, which pulls (or pushes) the rocking chair and “breaks” the frame.
Brake snowmobiles — scraper type driven by the arm through the rope.
V. KUKIN