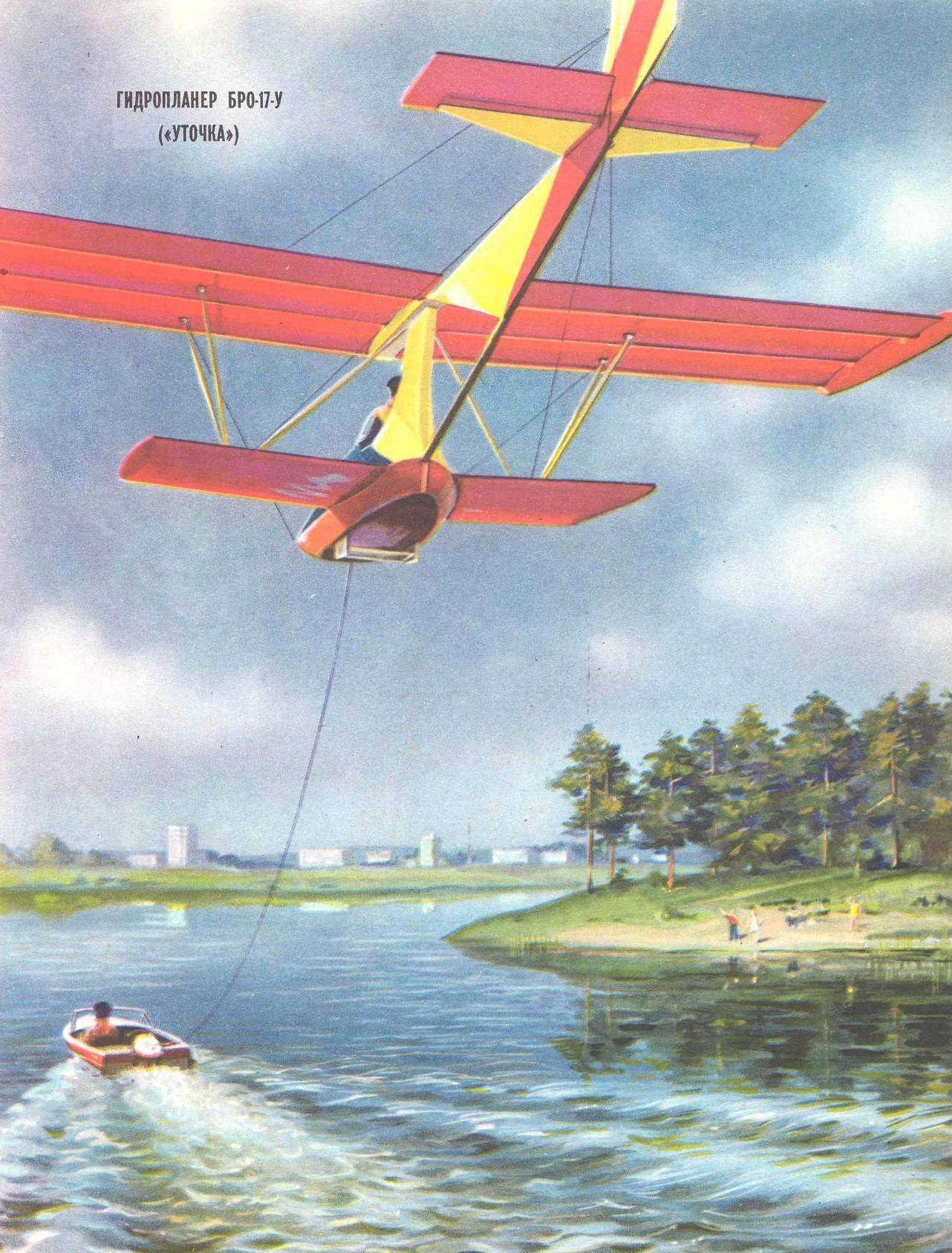 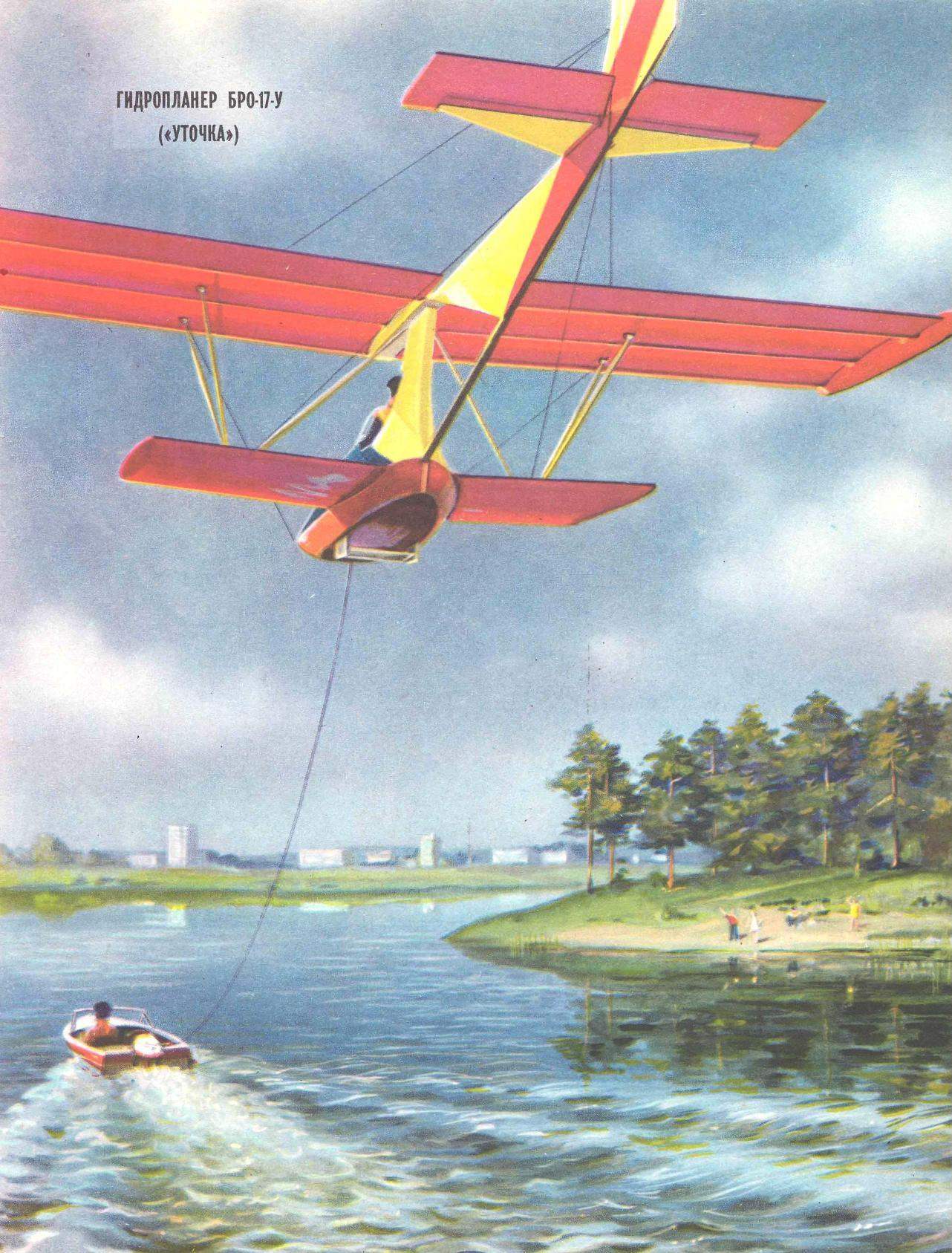 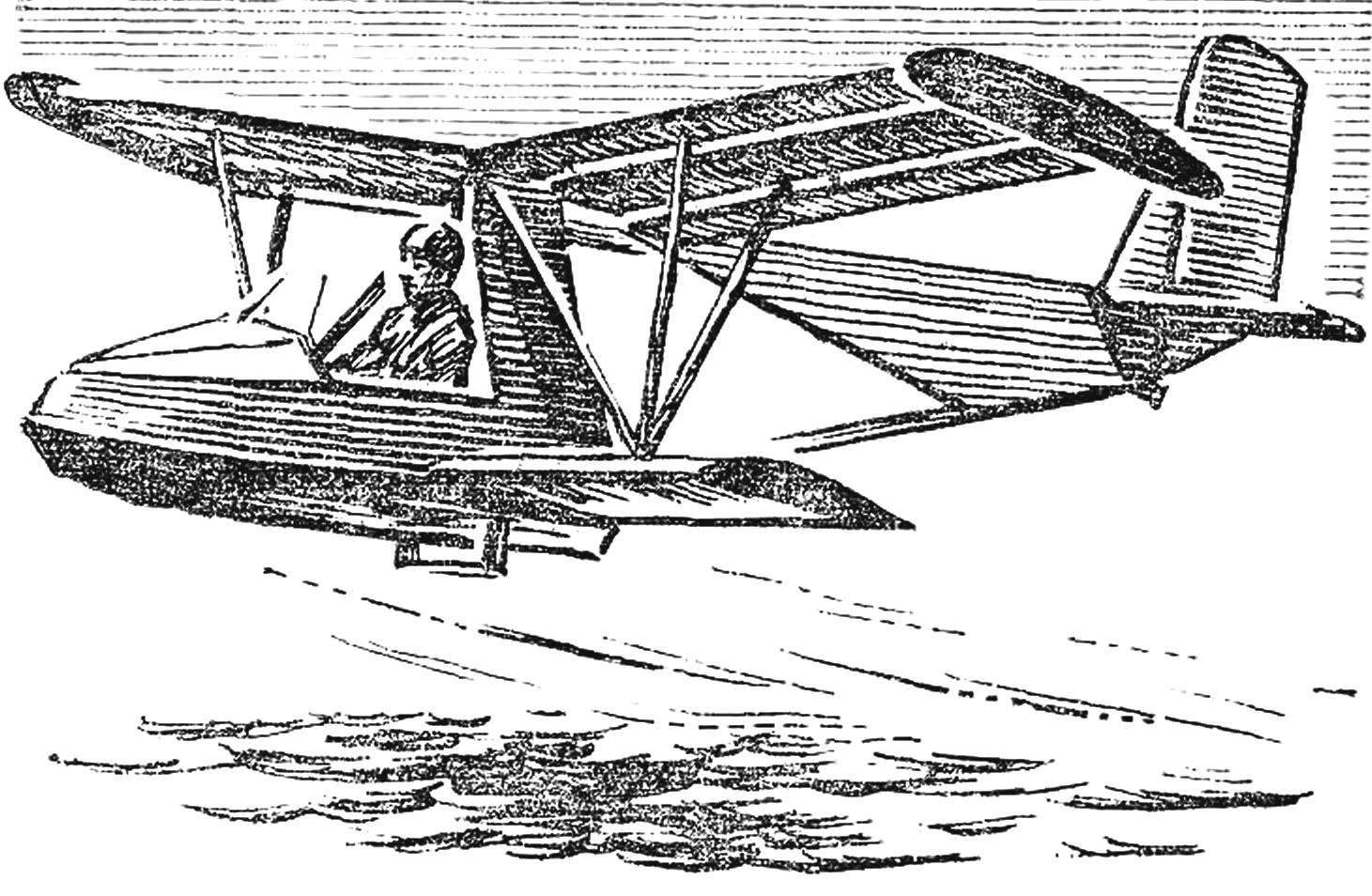 …A quiet summer evening over the water area of klaipėda seaport appeared strange flying machine: its wings were similar to a lattice, and the pilot was housed in a tiny cabin, reminiscent of a sidecar for the motorcycle, It was a new hydroplane “Duck” (Fig. 1), design B. Yu Oscines — the latter option already described in No. 4, 1975 BRO-16.
— Apparently our “Duck” is very similar to BRO-16, — says Boris Oskinis. — However, there are in it many innovations. First of all, slit the wing, used for the first time in the domestic pleurotaenia. Its lifting power is much more than solid. It is possible to reduce the scope to save some weight and make the glider a few smaller. Optimal speed “Ducks” because of the slotted wing is also dropped; thus, if hydroplanes BRO-16 could only tow a boat with a powerful stationary engine, for towing “Duck” enough to have a boat with an outboard motor “Whirlwind”. This will undoubtedly contribute to a more intensive development of hydroplanes.
“Duck” is quite technologically advanced and simple in design. The construction of such hydroplanes it is possible to establish not only in specialized enterprises, but also at stations of young technicians, and in school workshops, As life has shown, this work is particularly easy and quick to adopt model airplanes, after all, our glider is, to the creature great flying model!
I hope — concluded B. Oskinis that “Duck” is loved by Soviet glider pilots and will open before them new possibilities, new horizons: development as aerodromes a large number of waters, which are rich in not only Lithuania but also the other republics of our country. 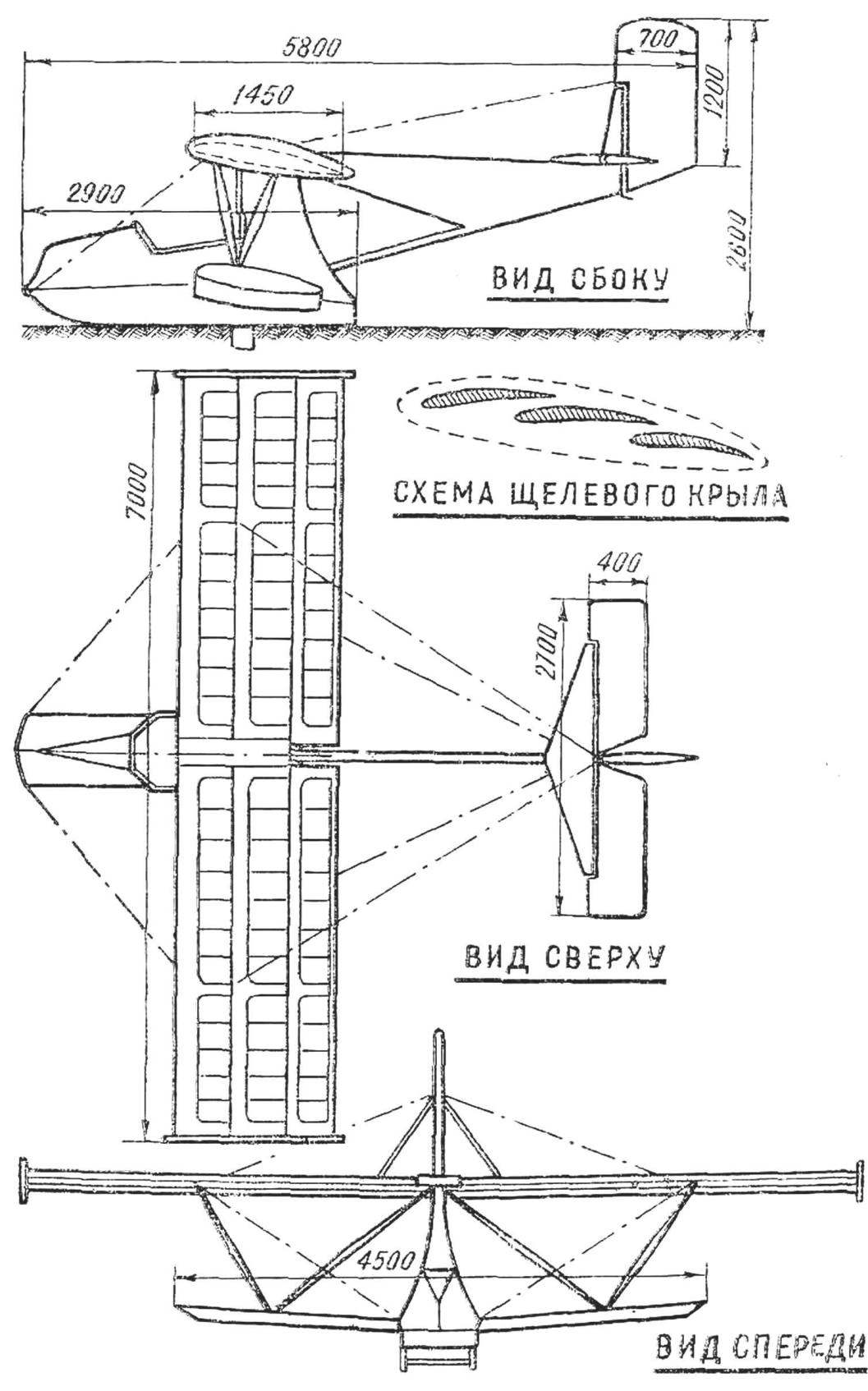 Fig. 1. Hydroplanes BRO-17U “Duck”. Scheme in three projections.
Slit the wing is structurally designed in the form of three sections with a chord of 300 mm (profile — Clark V), collected on single-spar scheme, with a slight foam filling the entire front of the spar to the toe. Each section on the outside covered with one layer of thin glass epoxy resin, making it waterproof. All sections are solid reinforced ribs, and end-plate. The average reinforced rib is attached a metal Shoe top node of the strut connecting the wing with the beam. The cockpit is a light boat with a wooden frame and a sheathing of plywood with a thickness of 2 mm, covered with one layer of fiberglass epoxy resin.
To speed up take-off on the bottom of the boat has a small underwater wing, with a span of 600 and a chord of 120 mm, made of stainless steel C placed in accordance with the scheme shown in figure 2. The surface of the wing top and bottom should be polished to a mirror Shine, as well as the stand that the wing connects to the boat.
For towing the “Duck” is in the nose of the ski lock of standard type, opened by a handle from the pilot’s seat. When you set excessive excess towing a boat this lock is automatically released and disengages the glider. Towing is netonomy polypropylene halyard with a thickness of about 10 mm, to withstand not less than 1500 kg at break; the halyard needs to have the ends welded (or turning of steel 20) the ring, one of which is hooked onto the towing hook of the lock glider, and the other for towing lock on the boat. This scheme fully complies with applicable athletes-glider pilots for glider towing aircraft: in case of accident or threatening situation, the driver of the boat also has the ability to release the glider. 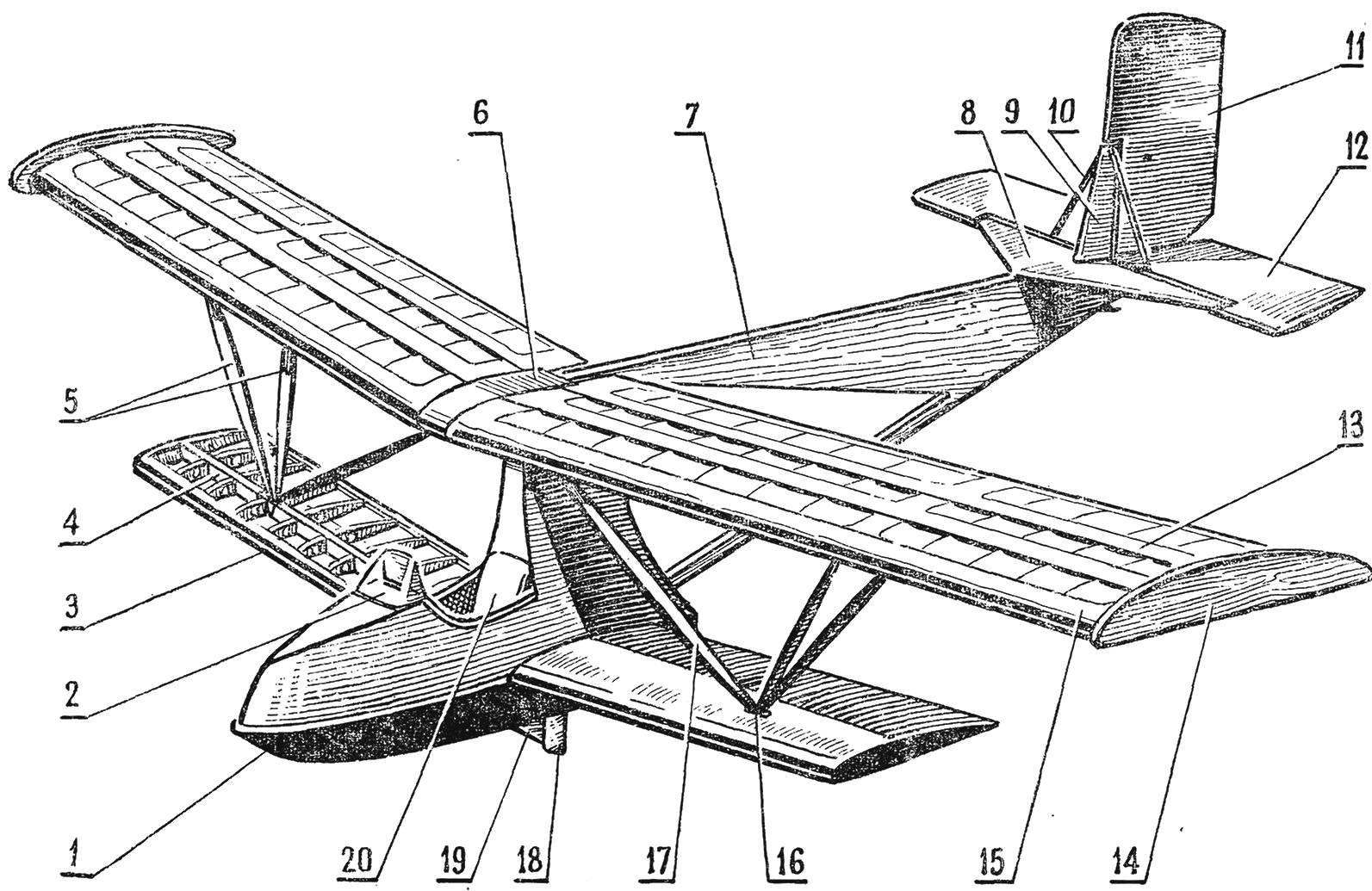 Fig. 2. The overall layout of hydroplane BRO-17U:
1 — the cockpit (boat), 2 — windshield 3 — bottom right console wing (skin removed), 4 — spar lower wing, 5 — V-shaped strut of the wing, 6 — wing, 7 — tail boom, 8 — regulator, 9 — keel, 10 — strut keel, 11 — rudder 12 — Elevator 13 — left upper console wing (slit), 14 — end washer of the wing, 15 — nose front section of the wing, the 16 — node mounting of the struts, 17 — diagonal brace wing, the 18 — hour hydrofoil, 19 — an underwater wing, 20 — seat pilot.
The first tow flights must be carried out strictly against the wind, in compliance with “Guidance on operations” and the following safety rules: a glider pilot must have a life jacket, buttoned all the buckles, on the boat-towing have to be the second man — scepsis leading continuously monitoring the pilot, and actively help the driver; during towing on the water is essential duty auxiliary boat with a nurse or a first aid kit, along with a set of rescue tools (circles, vests).
BRIEF TECHNICAL CHARACTERISTICS 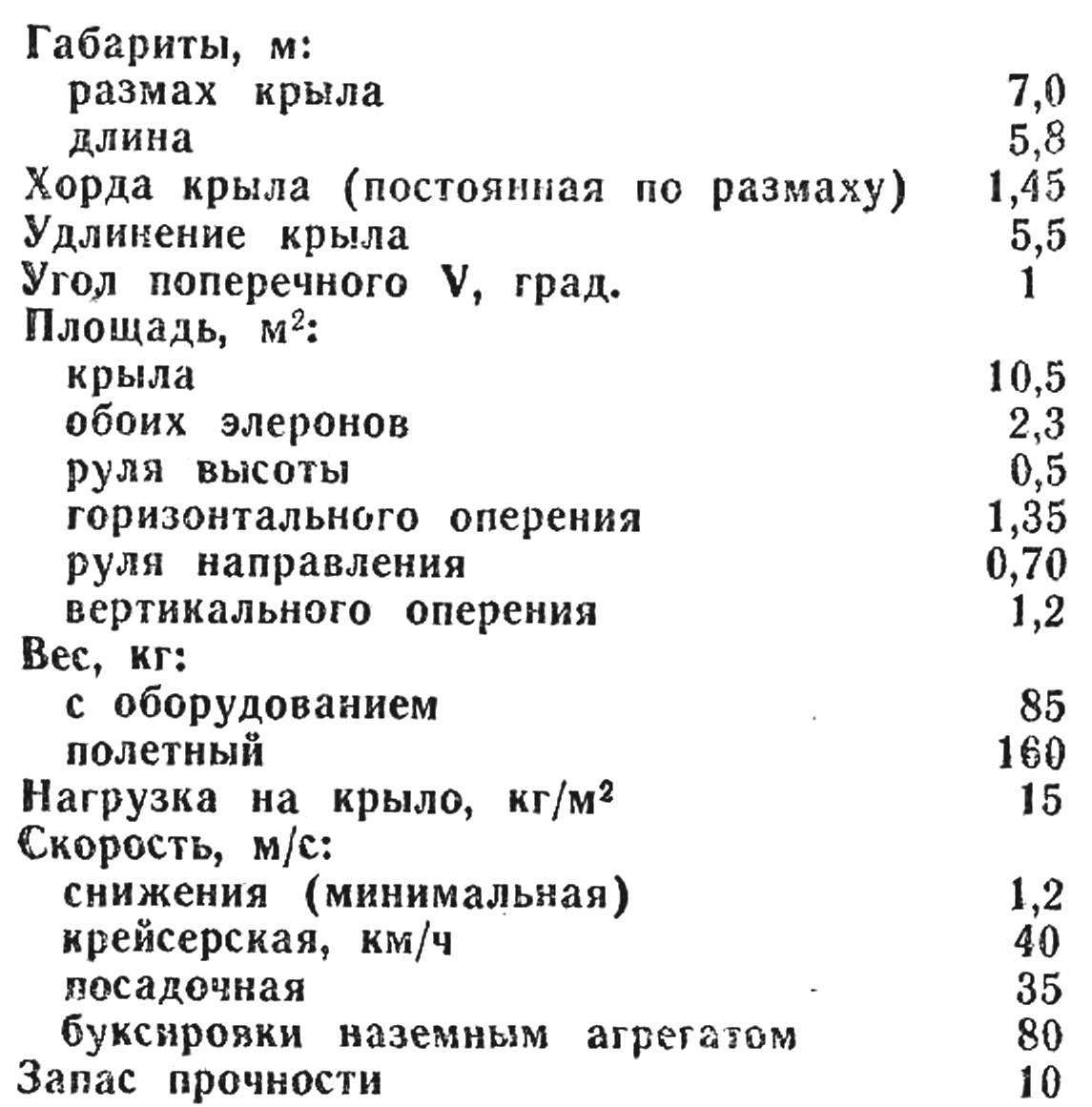 In one of the upcoming issues we will acquaint our readers with the working drawings of hydroplane “Duck” and explain in more detail about the rules of towing flights.