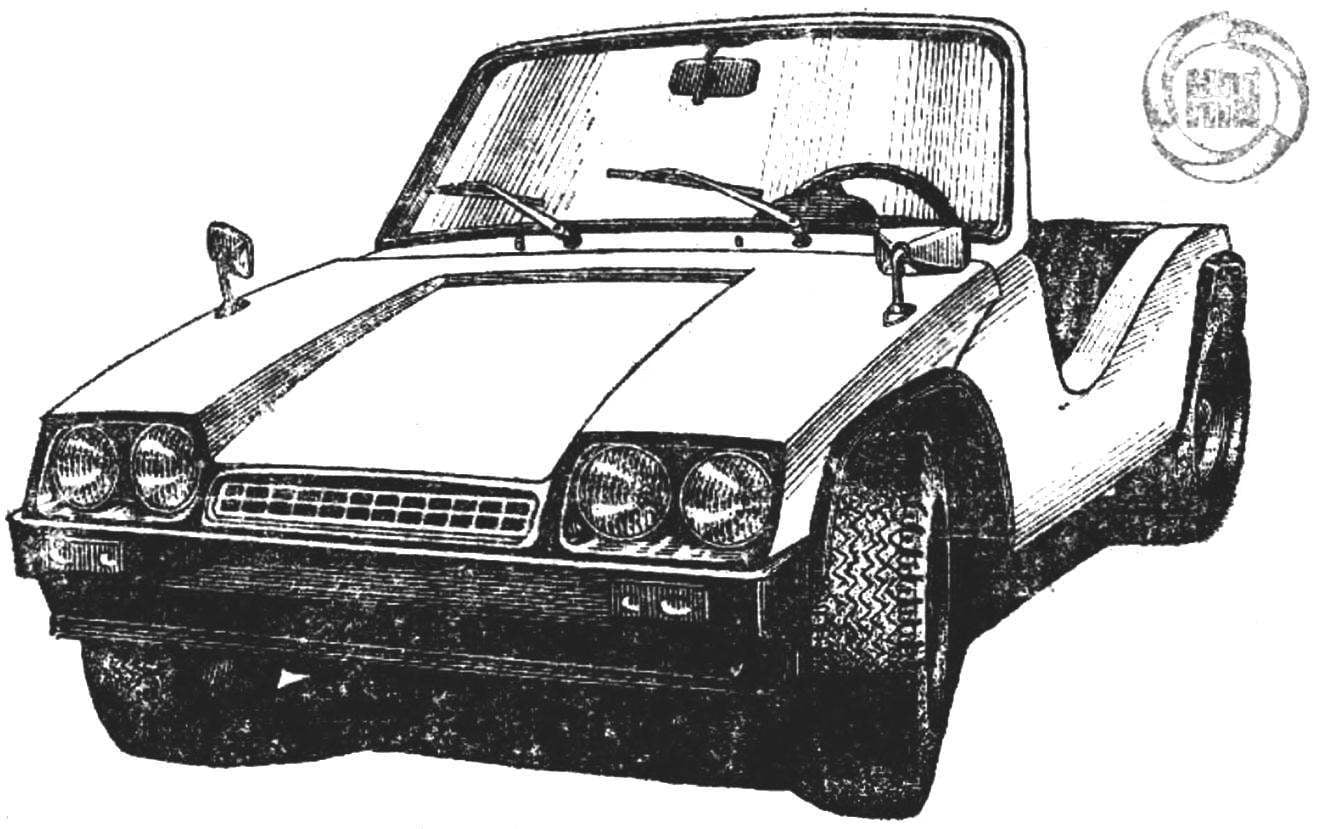 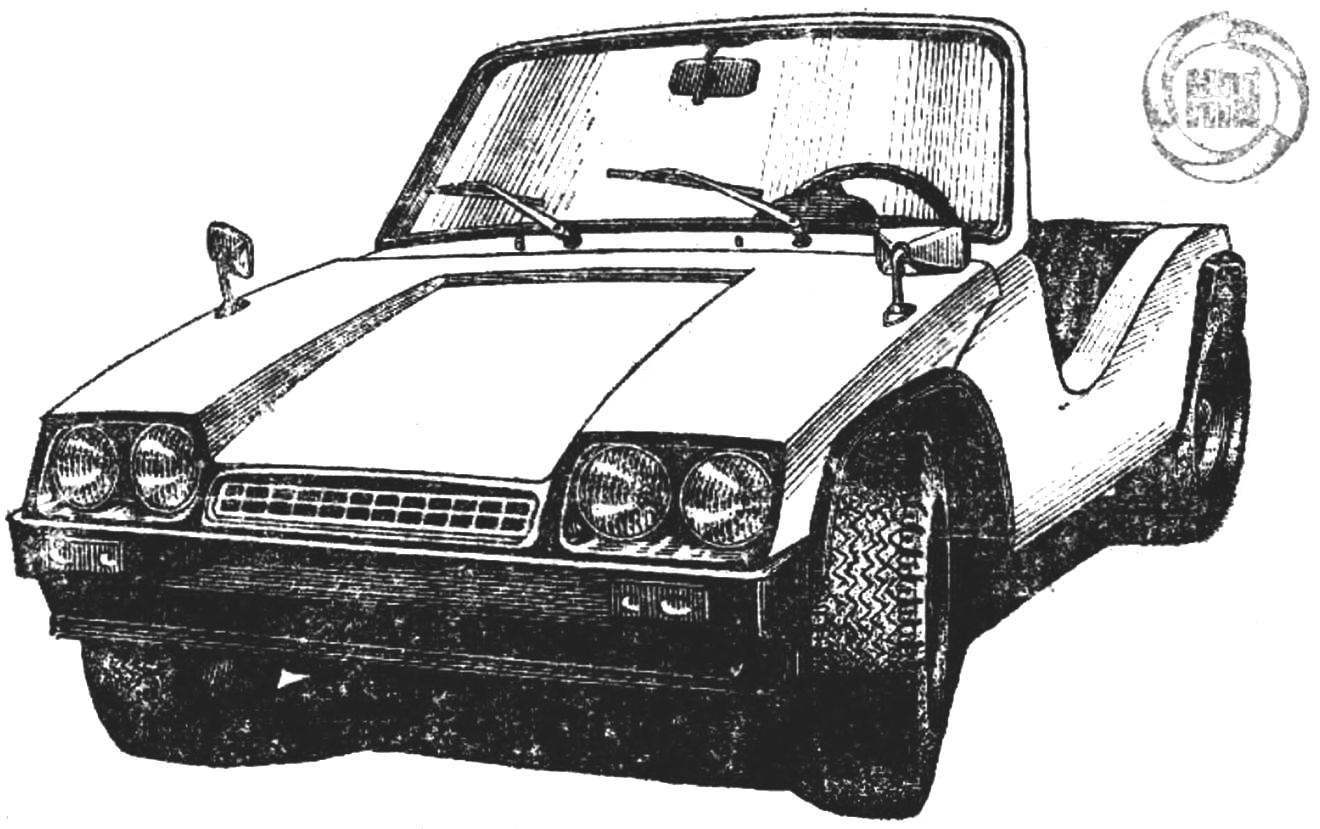 Central to the exhibition NTTM-82 this car attracted the attention of visitors not less, than standing next to the new “Lada” with a rotary engine. It is not surprising, because it very unusual that he double, and open, roofless cabin, and the plastic body, and an intriguing name “Sport-tourist”. Unusual and the story of its creation.
Prerequisites to the development was some pretty complex problems in the field of organizing mass repair cars and provide car Park with spare parts — the difficulties met by the network Avtovaztehobsluzhivanie during more than ten years of operation of the Association. If worn out parts and components have been replaced by stations for replacement, they injured in an operation or an accident of the body become a bottleneck repair services: a new clearly lacking, the demand for them didn’t find satisfaction. In addition, were not restored of replaced parts and components: on new cars they do not deliver, and ka the repair they are not implemented fully.
Then the young innovators Association had the idea to collect one of the semi-industrial method for the cars “wearing” them in a body, made more accessible than on the main line, technology, for example Valeeva of fiberglass epoxy resin? The more that these experiences have the youth Association has had over the last years, there rapidly developed a new kind of Motorsport — cross; enthusiasts on their own and built a car for him buggy.
In parallel, the production and economic side, and formed the desire of young designers to try their hand at creating a simple, robust sport-touring vehicle for young people. To synthesized the advantages of the buggy — dynamics, maneuverability, high passability with the elements of comfort of a conventional passenger car.
It turned out that the interest shown by many employees of the enterprises; gradually formed an integrated youth team of enthusiasts who have joined and engineers of different specialties — N. Musatov, S. Ishkhanyan, V. Bokov, V. Nedopekin, working, mechanics for car repairs, — V. Dragunkin, V. Glebov, A. Shakin, A. Zubair, I. Popkov. When it became known about their plans, the group found support and assistance to the leadership of enterprises, departments and workshops, the Committee of the Komsomol; and not sympathy, and deed — in material, in the organization and place of work.
The basis for the creation of the car was developed in Association jumper buggy construction. Musatov. This sports-racing car has perfectly proved in all competitions, showing good speed and strength qualities. 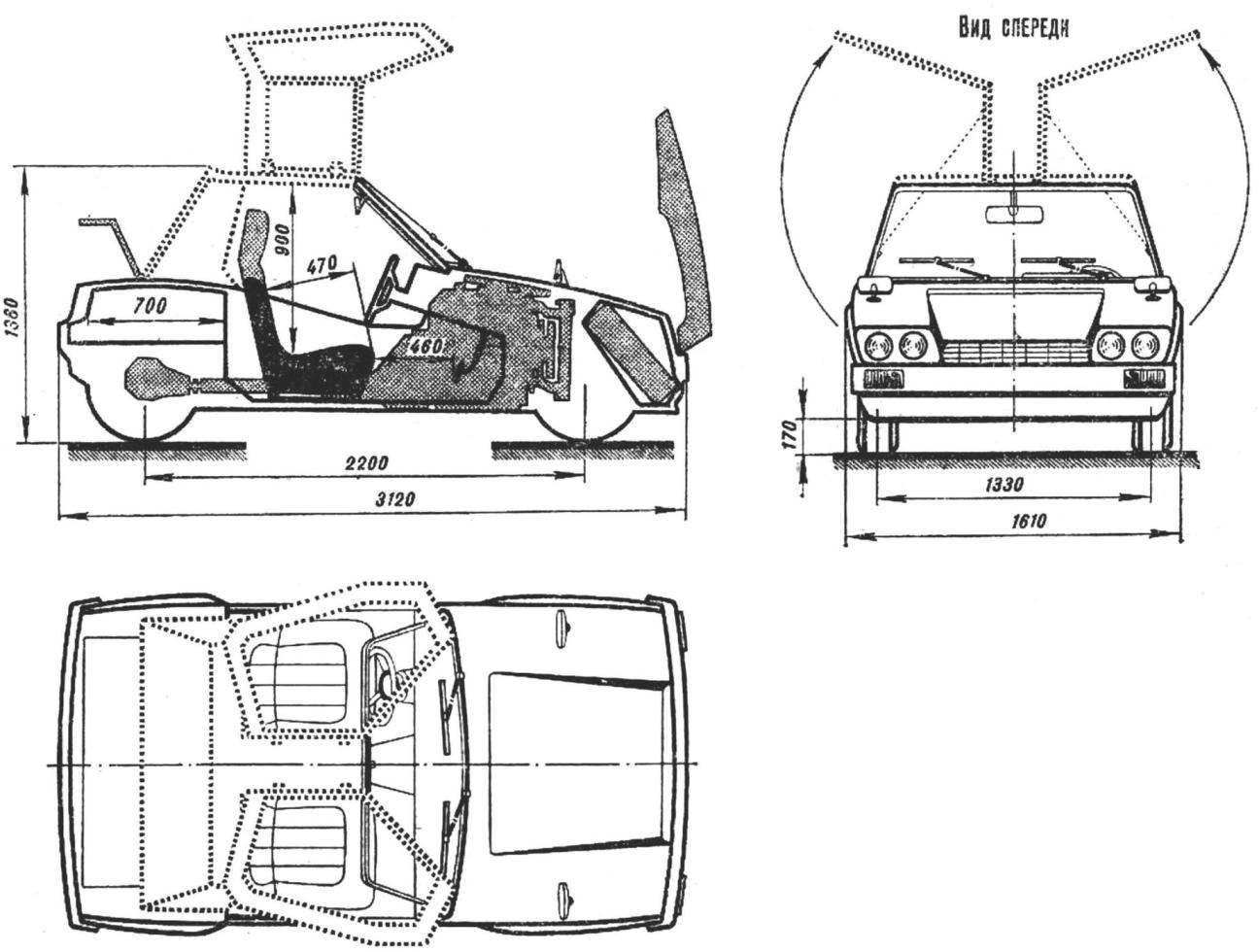 The scheme of the car (the dotted line shows a closed option rising doors).
Three years spent on design n fabrication conceived designs, from 1979 to 1981, the young developers in the process of finding the best technical solutions tried out three different versions of the car. The first had a flat windshield and opening up doors. Then came to bedernau version with an open body, using a bent windshield cars. However, the lack of a roof is losing share of comfort, reducing security in an emergency. So the final decision came out of the arc of security and remove the tent leatherette. This variant became the Central exhibit of the exhibition NTTM-82.
BRIEF DESCRIPTION OF THE CAR
“Sport-tourist” we call youth travel car. This is a double machine with a classic layout scheme: front longitudinal-engine, drive wheels — rear. There are two baggage compartments. In the front, located between the bumper and the engine, kept the tool kit and the spare wheel is located between the power elements of the frame body and which is an element of passive safety in frontal collisions. Behind the seat is a second trunk with a capacity of 0.2 m3. He was placed below the gas tank.
Main components and parts used from serial production cars VAZ.
Body — of plastics: assembled from laminated fiberglass panels — sides, hood and trunk, bumpers, interior panels. The roof open body represent arc security and raise the tent leatherette. In the cabin the seats are typical for vehicles of the “jeep” or front of any model of “Zhiguli”.
The frame is a spatial farm, all-welded profile square cross-section; its weight is 70 kg.
Engine model VAZ-2106, the working volume of 1.57 l, but can be used any, produced by VAZ. It is a shaft with two u-joints; rear axle from the car VAZ — 2101, amplified. Clutch single disc, dry, with diaphragm pressure spring; drive off — hydraulic.
The front suspension of the car — independent on the transverse wishbone suspension with coil springs and two telescopic hydraulic shock absorbers. Rear suspension — dependent, with coil springs and two hydraulic telescopic shock absorbers, four longitudinal and one transverse bars.
Brake — drum-drive front and rear wheels from the transmission and master cylinder with coaxial pistons.
Parking brake, manual, a cable-drive pads on the rear wheels.
The steering gear from the car VAZ — 2121; wheel — disc, stamped, rim size 1271×330; tires are selected depending on the purpose of the car.
Instruments on the dashboard and exterior lighting — from the car VAZ-210З.
S. ISHKHANYAN, V. BOKOV