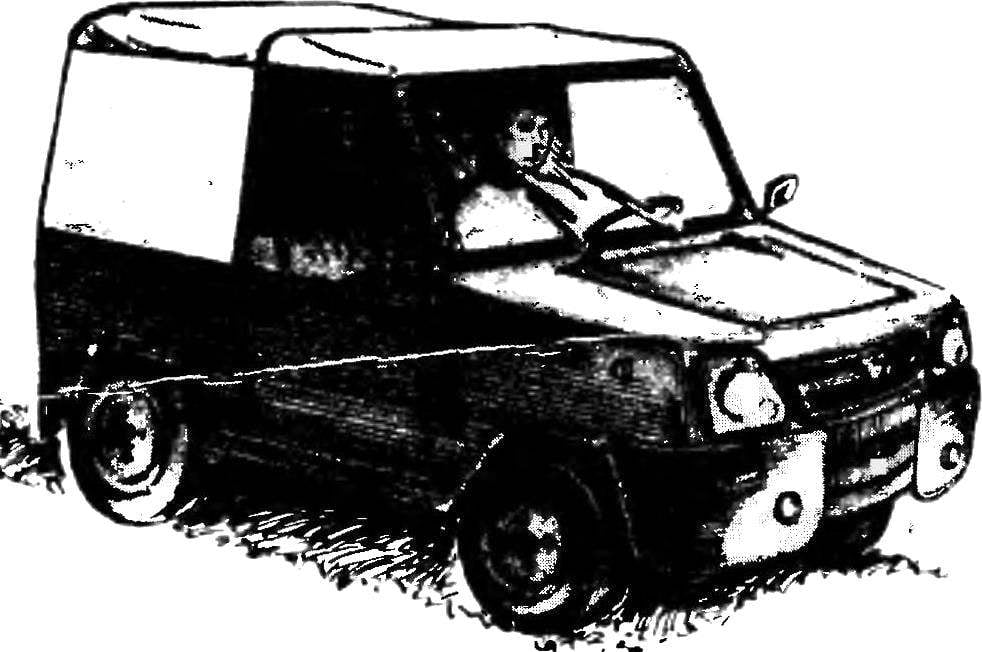 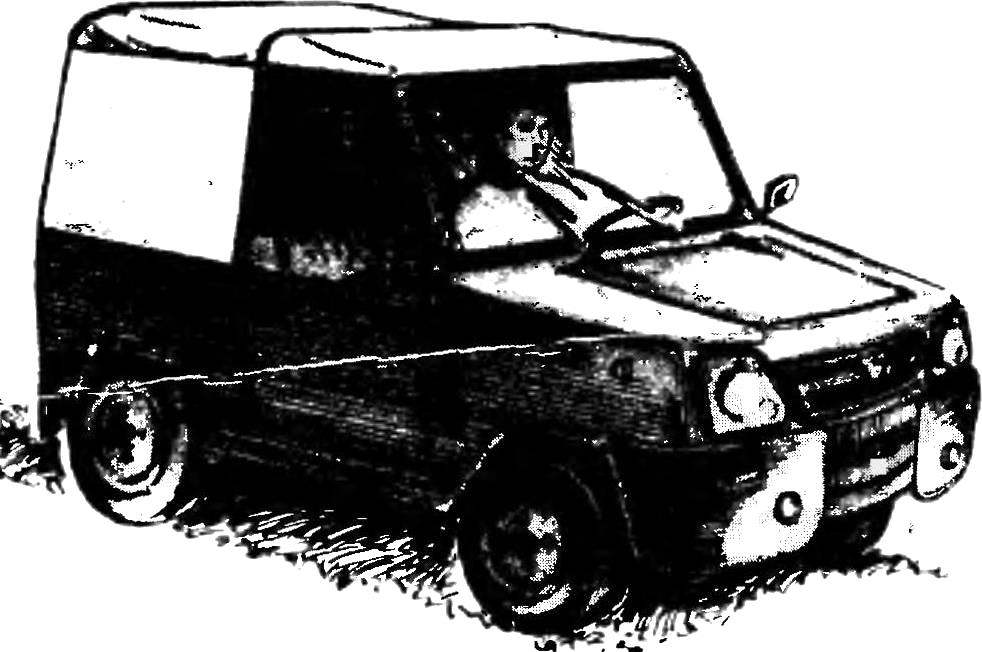 It just so happened that the car in our country is becoming less of a means of transportation and all more luxury. Accessibility for a person of average wealth — not a speculator, not a businessman, not a banker close to zero. Those hundreds of thousands of rubles, I ask today for any car, not save any “works righteousness”.

You can certainly buy a cheaper battered-broken — and then a few years to restore it. But there is another way to make the car their own. I must say that the homebrew as a model for design often choose a vehicle type “SUV”. And this is understandable: simple external form, the simplified layout, large interior volume compared to cars of other types — all this attracts.
But for all that, some cars even with a single axle have high permeability due to the large clearance. Over the past few years the editors of “M-K” acquainted readers with a number of such machines. Today we present you another one, created by our reader V. G. Shander.
A subscriber to the journal “modelist-Konstruktor” I are already here more than ten years. Like all homebrew, love this magazine, enjoy learning all of its rooms. This time he decided to play the role of the author to introduce the readers of the “M-K” with his development.
This is a mini-jeep, which later received the name “Pony”. Of course, those drawings and photos that you see here in the magazine, is not enough to make him, however, I think more is needed. My experience tells me that no one ever uses the magazine as an album of working drawings. The homebrew, as a rule, publications studying the experience of other Amateur designers: investigate the possibility of using ready-made units, most interesting self-made components and parts, adopt most effective design techniques. And only then start designing your car according to the set of serial nodes, which managed to get.
To create the car, it took me only six months and already two seasons of “Pony” is successfully operated.
Here are the main points of the technical tasks that I made up for myself before designing the machine: roomy interior, simple design, high manufacturability at independent production, the use of non-deficient components, assemblies and materials, minimal costs for production and low cost operation. I think, all these requirements I was able to accomplish primarily because the car was built according to the type of “jeep”. The capacity of the machine says at least the fact that the room is free to enter a great buggy, and on either side of her are two more of my children. In short, in the car included the whole family of five.
The car “Pony” engine IZH-PZ from motorized FDD on the front. Drive is to the front wheels (in recent years this has become the main drive of almost all cars).
The car body represents the spatial farm, made from round and square pipes of various cross sections. After welding the frame was sheathed with plywood and papered with fiberglass using epoxy resin. The underbody, wheel arches and door sheathed with galvanized tin.
The car has two hood — big and small. Large fixed to the frame using the five bolts and removed at major engine repair or suspension, which greatly facilitates access to all underneath the units. Well, a small hood — for easy preventive maintenance and inspection of the engine.
The protective glass of the headlight cut out of plexiglass and have the form of irregular quadrilaterals — they give the car a very modern look. However, as a decorative grille, borrowed from the VAZ-2108. A third door located in the back of the body, essential for the carriage of goods. Windshield mini-jeep — motorized FDD. Seat — also on this machine, but they are located much higher from the floor compared to FDD. From motorized wheelchairs and power assisted steering — homemade-only steering wheel.
The car interior floor sewn linoleum on a fabric basis. The walls are covered with vinyl leather (for vatinovac substrate), “sewn” decorative nails, which makes the interior elegant. 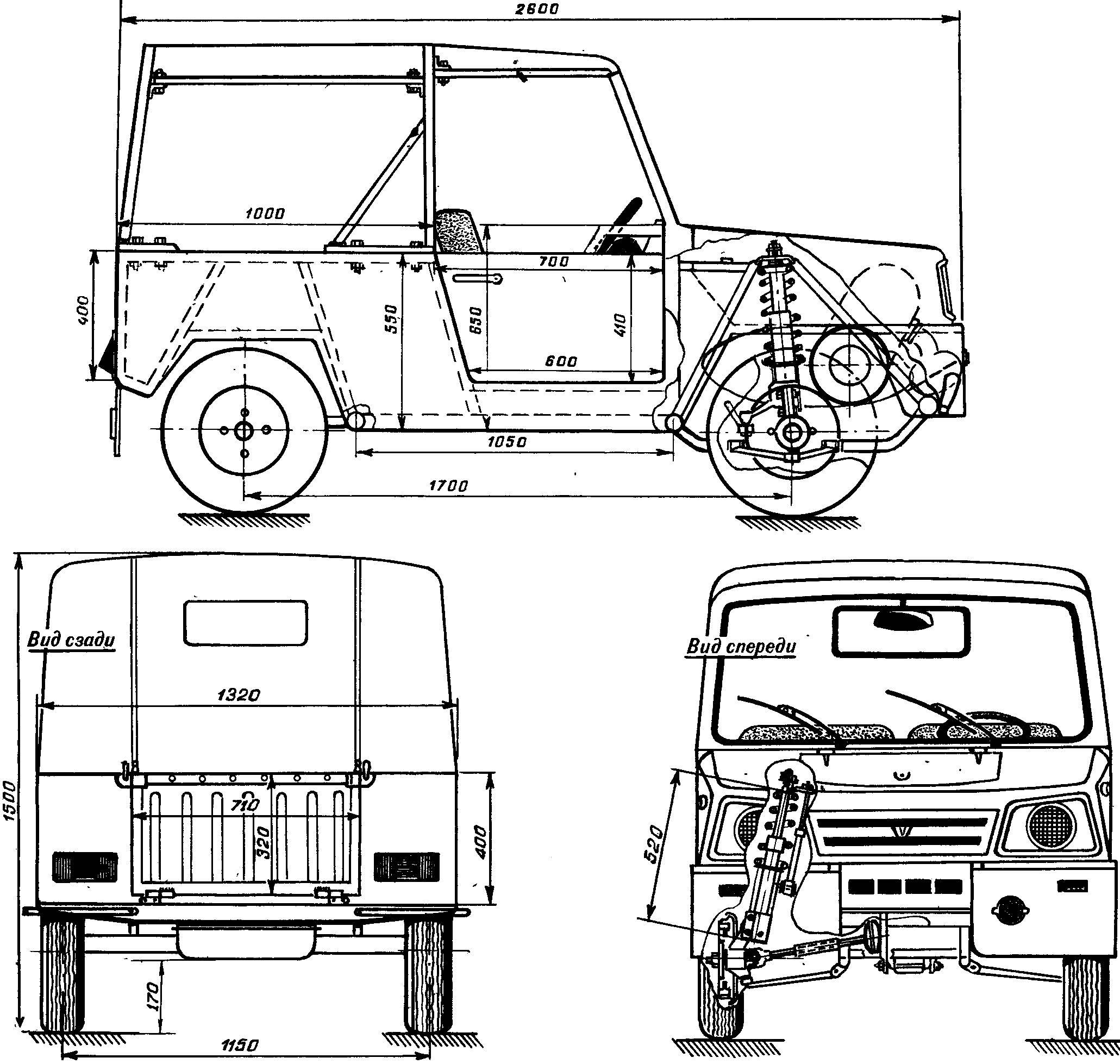 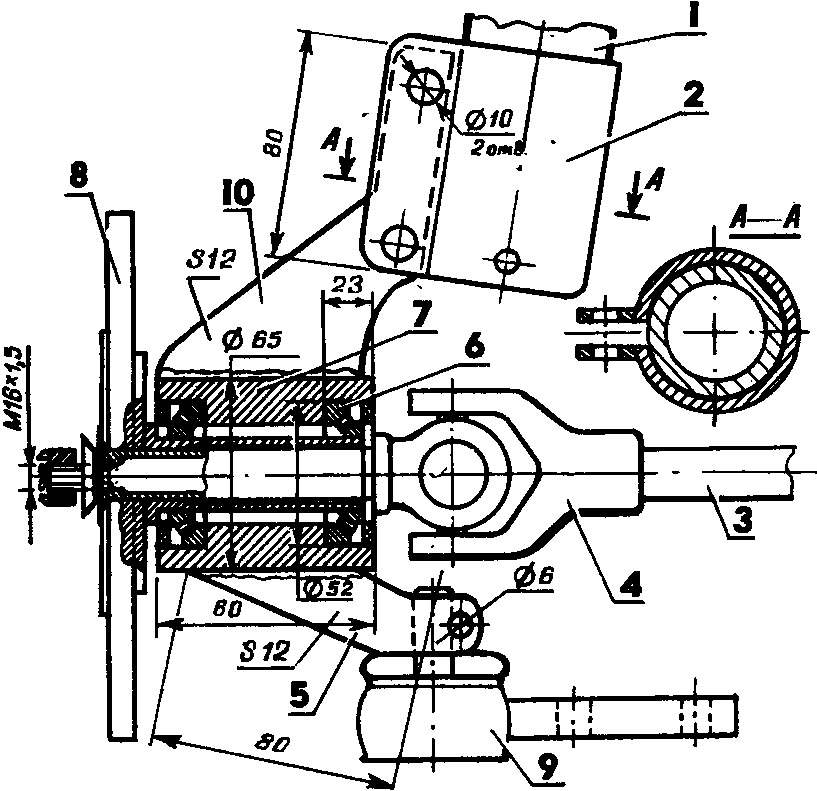 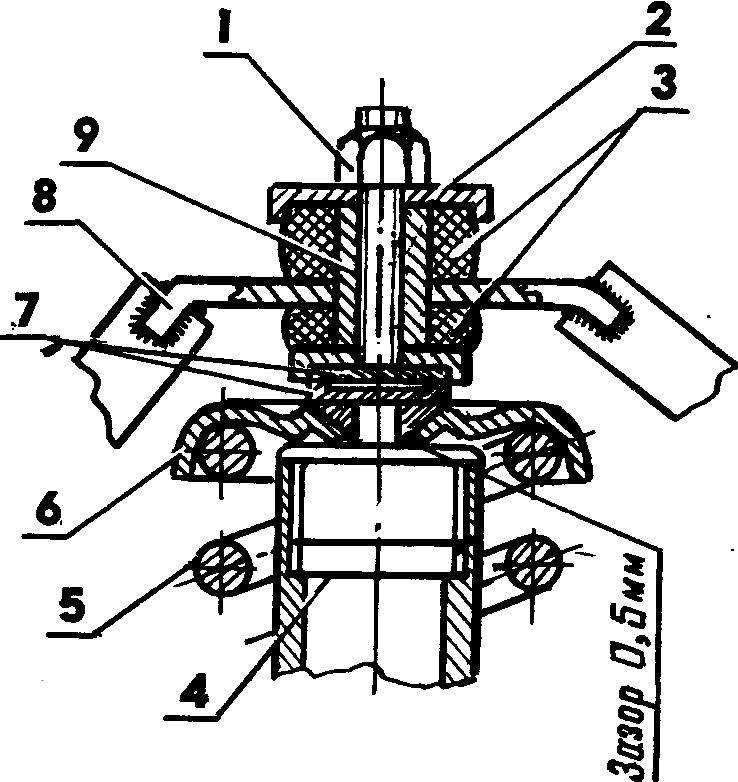 The upper mount of the strut is:
1 — nut, 2 — puck support, 3 — rubber bushes, 4 — absorber, 5 — spring front suspension, 6 — Cup, 7 — bronze washers, 8 — prop, 9 — pin.
The front suspension of a mini-jeep made, type “McPherson” or “swinging candle”. Two telescopic stands made of feathers of the front fork of the motorcycle M-106. In the upper part they are shortened to 120 mm, after which they were cut the same thread as on remote parts. Spring from the rear suspension of the car ZAZ-968, and its length a quarter less than the regular “Zaporozhye” springs. The lower ball joint from the tie rod end GAZ-53. I must say that the shock absorbers of the front fork of the motorcycle are not designed for damping oscillations of the vehicle of such weight, so in parallel they had to set hydrohalite scooter “Electron”.
Strut when cornering itself rotates around its axis, so that in the upper part it communicates with the fixed elements with bronze washers, between which is laid grease. I can say that during two seasons of wear I have not noticed.
Lower front control arm is welded from water pipes 3/4″ and attached to the frame with pipe silent blocks. For Assembly they used a specially made mandrel for pressing of rubber (piece of rubber hose), which is carried out under high pressure. Hinge joint was very reliable — in any case, still violations in its work have not yet arisen.
Swing arms from motorized FDD welded to the glass with which the shock absorber attaches to the steering knuckle. On the one hand, the glass is cut according to the height in order to ensure maximum compression of the shock absorber. The shock absorber is additionally fixed with a drain bolt, tighten the shock absorber through the hole in the glass.
The function of the constant velocity joints comply with the cross, borrowed from the steering shaft of the vehicle ZIL-130. 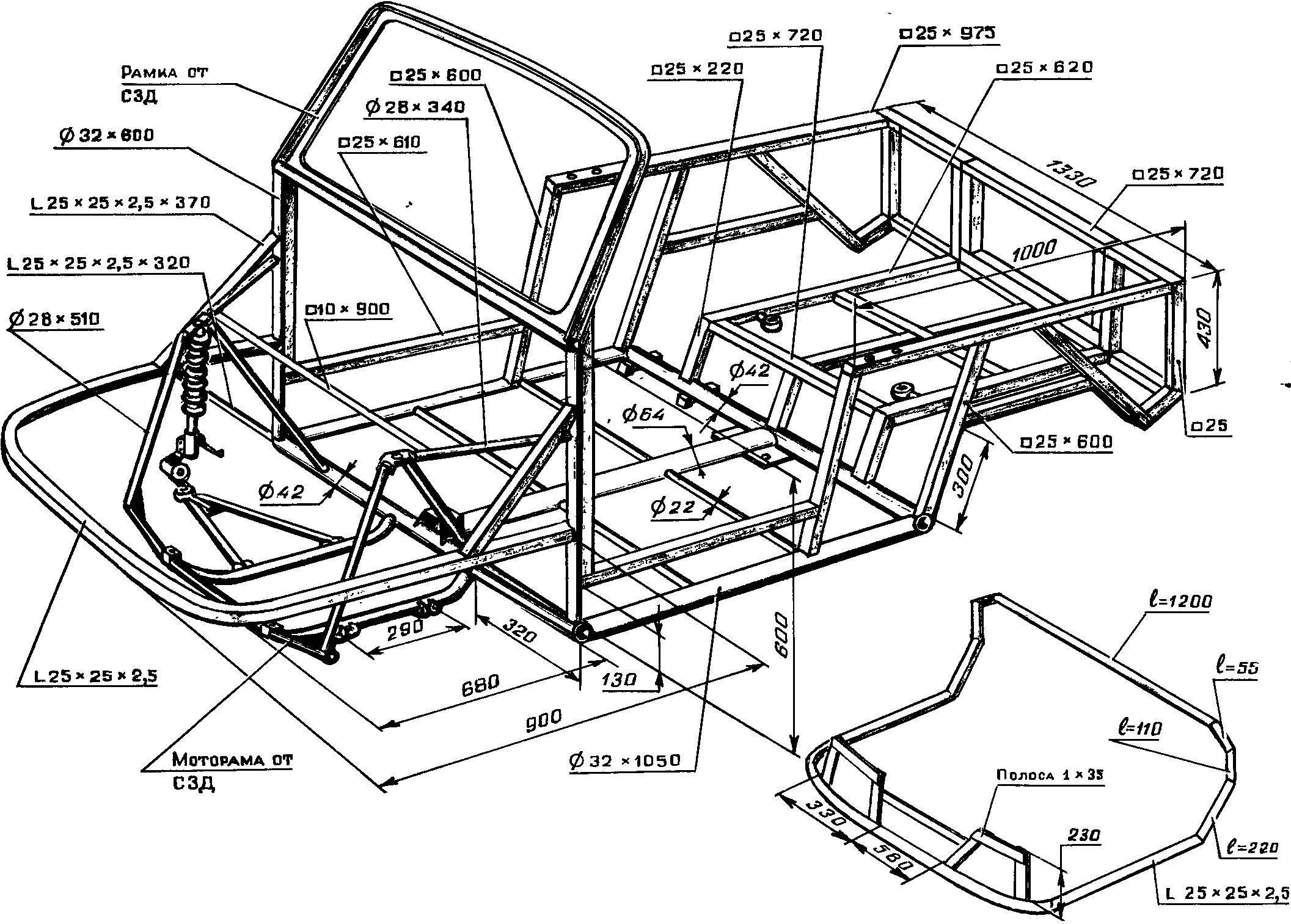 Frame mini-jeep “Pony”.
Right bottom frame large hood.
The front engine location was very good for a car of this design. Improved cooling of the motor, the rational use of underhood space and the internal volume of the salon, and in addition, instead of control cable grip has the opportunity to put a hard pull, which is much more reliable. The cable — and that is very short — there are only in the control system of the throttle valve and the engine carburetor choke carb.
Electric “Pony” is almost exactly the same as the microcar FDD, only the constant current generator I replaced the alternator. Tail lights and headlights — scooter “Electron”. The direction indicators and repeaters from the car “Lada”; dashboard — ZAZ-968A.
The awning is sewn from vinyl faux leather; the back part of the tent open by the “lightning” and buttons.
My car can be called a semi-open since its doors no glass, to make them my first priority. I also intend to insulate the tent and set the car heater to operate it in winter conditions.
Technical data mini-jeep “Pony”
Length mm: 2600
Width, mm: 1320
Height, mm: 1500
Base mm: 1700
Track, mm: 1150
Ground clearance, mm: 170
Full weight, kg: 640
Maximum speed, km/h: 70
Teal engine: IZH-PZ
Power, HP: 14
Wheels — sidecar cover
Tyres: 5.00-10
Brakes — drum, hydraulic, all-wheel
Steering — gear with the rack (the gear ratio of 10.5)
V. SHANDER, head of technical circles of the pioneer