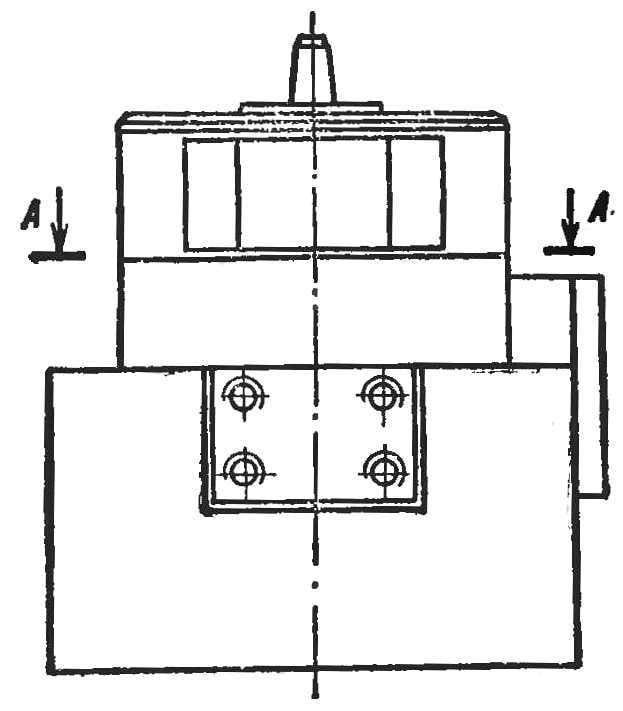 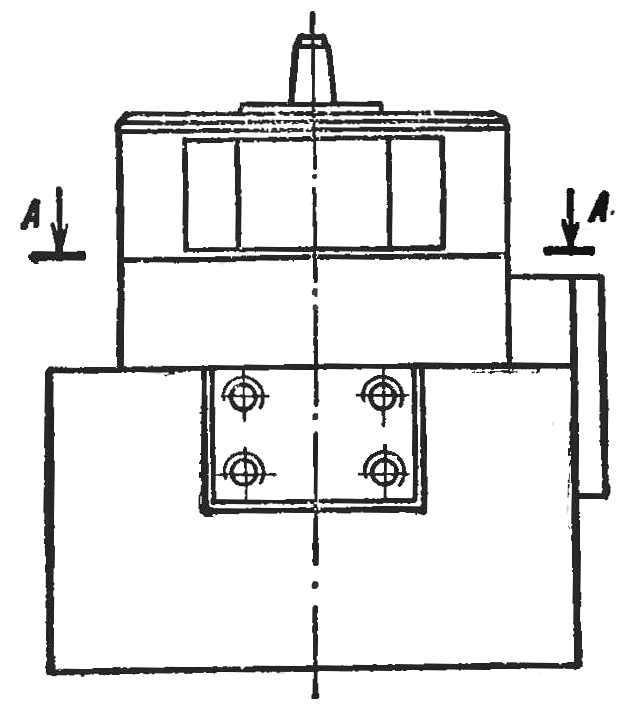 Great interest of young innovators, professionals of various industries has caused organized at ENEA USSR tematicheskaya exhibition “Inventors of Latvia — production”. And especially the fact that she showed an interesting experience of “planning” inventions accumulated e Republic, there are organizations pioneering the search on the most pressing, important for the national economy problems.
About the “geography” of the search gives an idea have a list of the sections of the exhibition. Here was presented the electronics and computer engineering, chemistry and health, forest, woodworking and paper industry, construction and building materials, light and food industry, agriculture, mechanical engineering and metal working.
Not accidentally almost every visitor carried off in his notebook interesting circuit or drawing, write about any new product, need an address — a kind of business gift.
We offer some of them to our readers.
WELDING WITH A HAMMER…
The Department of General physics, University of Latvia, candidate of technical Sciences A. Branch developed an original method of cold welding, which received the copyright certificate № 371043. From all existing methods of joining metal surfaces, this has the desired effect is achieved through a simple “Saigo” one of the parts to be welded, tightly pressed against each other.
How is this strange welding! The options may be different. For example, using this technology, you can get the connection like spot or seam welding. On relevant sections of both parts creates a system of equally spaced protrusions (Fig. 1), the distance between which should be equal to one or two diameters of these projections. 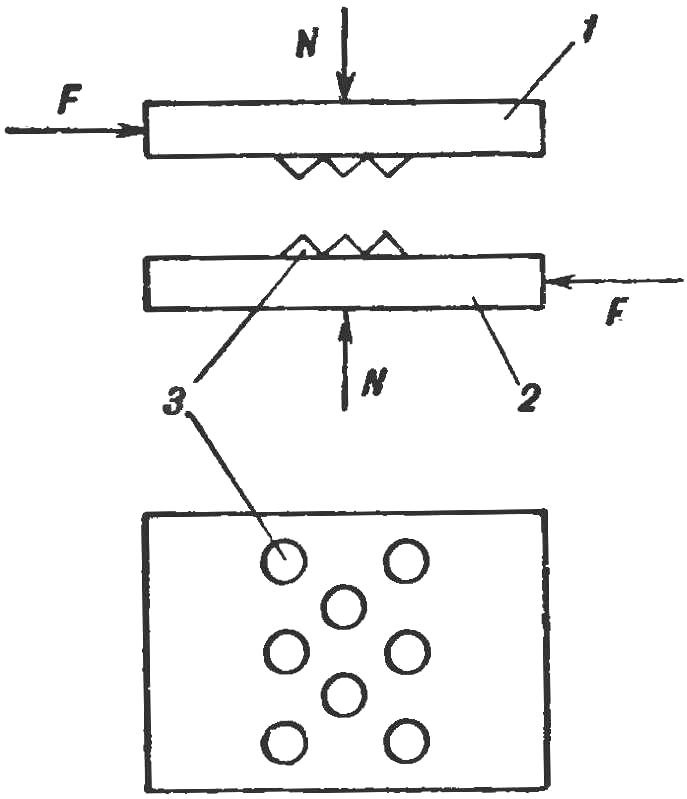 Fig . 1. The scheme of welding shear:
1-2— welded parts, a 3 — lugs, N — the pressure (load), F is the shear force.
Folded tops of the “bumps”, the details are compressed to a full plastic deformation of the protrusions, and then, while remaining under the pressure, are shifted relative to each other on the distances between the projections. The plots, which had “bumps” that turn into a solid weld.
This method has a great advantage in comparison with the existing type of connection, with the penetration of the punches or rollers, so as not form dents in the metal, and hence does not change its cross section.
Interestingly, there is another, more simple way of weld shift. To do this, the surface roughened, and only one of them, a system of ledges. Compression and shift of the welded products are existing for these purposes installations. 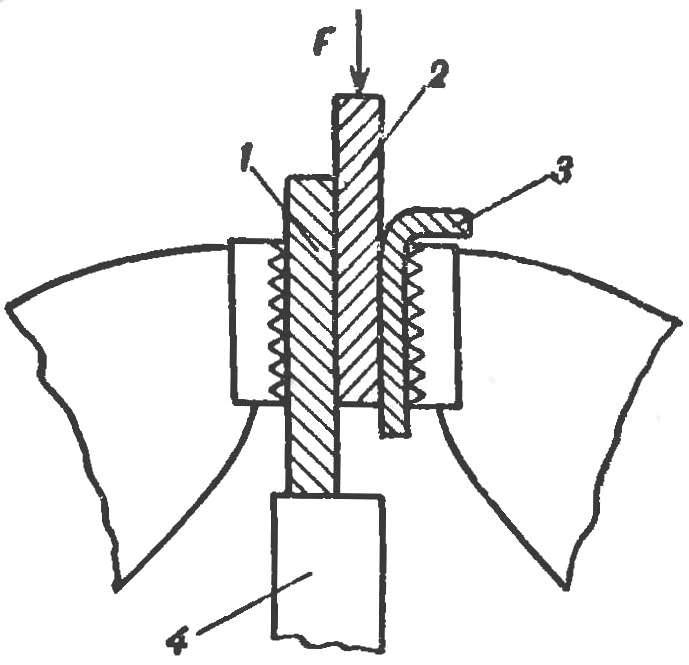 Fig. 2. Welding vise:
1 — a fixed strip. 2 — move strip, 3 — strip to reduce friction, 4 — pole.
An interesting option is offered for the welding of small aluminum strips. They are processed a file, then one of them with the help of punch mesh projections. Now, you can force to clamp the strip in a vise, as shown in figure 2, and hit the protruding part with a hammer — there will be welding.
WHEN THE VIBRATION — EACH
You know how much trouble delivers vibration to those who work, for example, ramming machines, hammers; how much harm she brings the walls and ceilings of buildings, details poorly balanced motors and so on.
However, the vibration is able to perform useful work. In the Riga Polytechnical Institute have established an experimental model of pneumomassage vibrolance designed for orientation and single-piece feed detailed in the working area of automatic machines. The unit is equipped with continuous adjustment of the amplitude and frequency of oscillations, which allows to regulate the speed of movement of parts from the hopper through the spiral tray. The vibrator is particularly effective in potentially explosive areas, increased requirements to performance, as the hopper is capable of feeding up to 20 cm in a detailed second.

Fig. 3. Electromagnetic shakers:
1 — an annular block of electromagnets (the stator), 2 — anchor with poles.
In the same Institute developed electromagnetic shakers (Fig. 3) for the mechanization and automation of polishing precision parts in machine building, instrument making, tool making. It consists of a ring-shaped block magnets, made in the form of a stator and concentrically of the armature with the pole. Power windings is carried out through the rectifier diodes. One such plant provides an annual economic impact of more than 5 thousand rubles.
GUARDIAN CORROSION
Before applying to a metal surface a protective lacquer coating, it is usually thoroughly clean from rust. This is time consuming and inefficient operation, especially when it comes to large areas of coverage.
At the Institute of inorganic chemistry, Latvian Academy of Sciences has found another solution to the problem. Instead of getting rid of old rust on the metal, scientists have proposed, on the contrary, to secure it to prepare for painting surface, turn into a kind of primer.
For this purpose we developed a special composition — modifier rust: aqueous solution of phosphoric acid, tandav, polar solvents (acetone, ethyl alcohol, atipamezole) and surfactants.
Modifier P-1T is a dark brown liquid that is applied with a brush directly on rust, having a thickness of 60-80 microns. After 3-4 hours the treated surface dries and becomes blue. Two days later can be painted.
Available modifier Riga paint and varnish plant and is widely used Riga trust orgtekhstroy and a number of other enterprises.