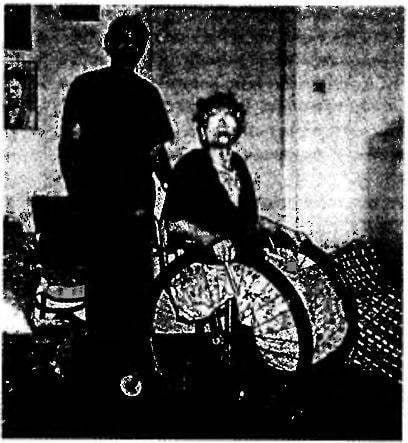 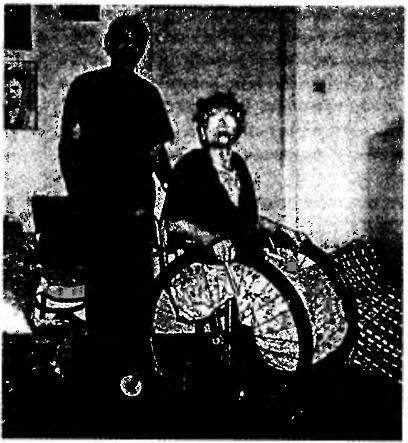 The unenviable fate of people unable to move on their own. Simplifies their lives only a specialized vehicle — a wheelchair. It allows to drive up to the bookshelf or the window, go to the balcony, finally, just to stretch my muscles. Of course, you can buy a modern wheelchair factory production. However, I think it is not affordable for everyone. And especially the disabled.

There is another way to do it for such a person. That’s what I did, designing a mobile chair for her sick mother. The stroller is pretty light and durable. And, importantly, maneuverable. At least the elderly woman controlled her easily.
Those who decide to take advantage of my experience, I would advise first of all to decide which will be the chassis (large) wheels—front or back. If the patient “sporogenesis” in the back, then it is easier to roll a wheel, bending hands in elbows. In this case, place these wheels in the front. If the patient is more mobile and he is more comfortable settling disputes provided by moving them downwards, running wheels must be placed in the back.
Made my buggy with a front running wheels. However, the design allows, nothing fundamentally altering, install them and back.
Of finished products for prams you will need a chair with a metal frame (dimensions: height 660 mm, width 380 mm, length of the locating blocks of the base 350 mm), two front Bicycle wheels with a diameter of 710 mm and two swivel wheels (preferably inflatable to a diameter of 120 mm).Other parts and materials it is easy to pick from what is available usually in stocks at the Amateur constructor. 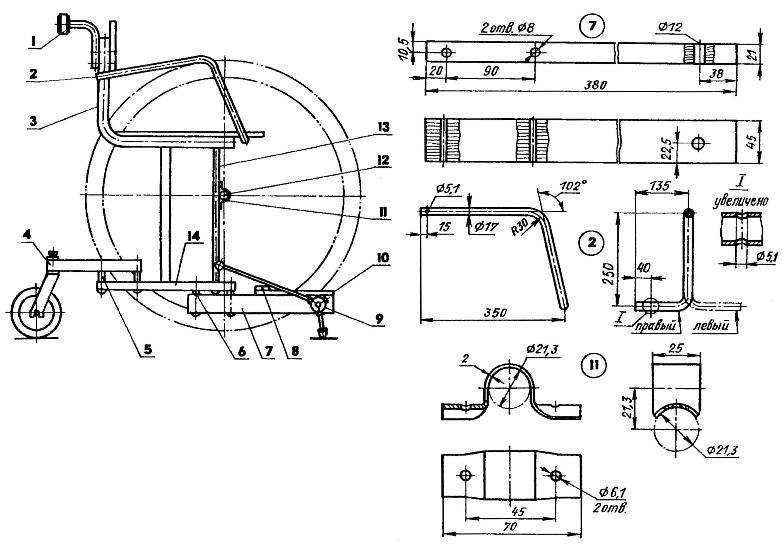 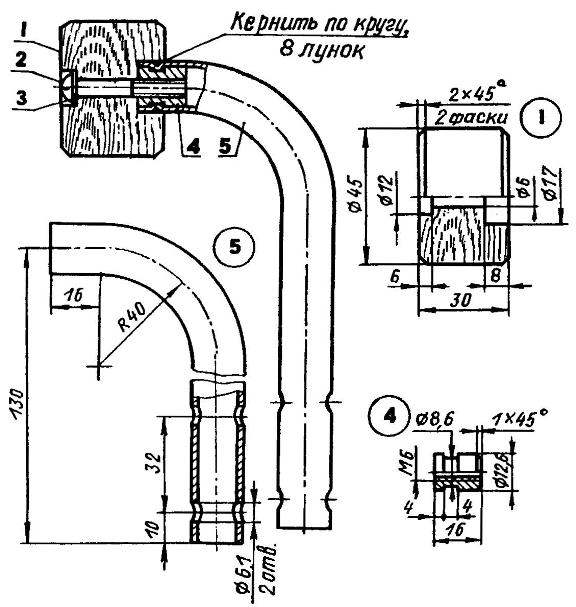 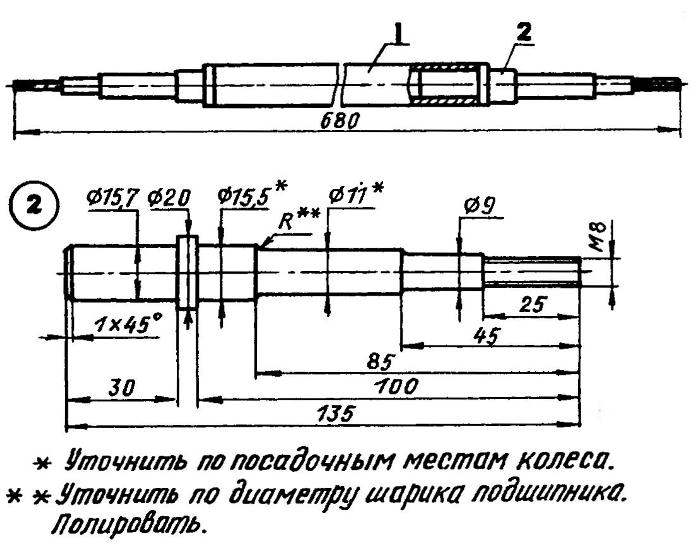 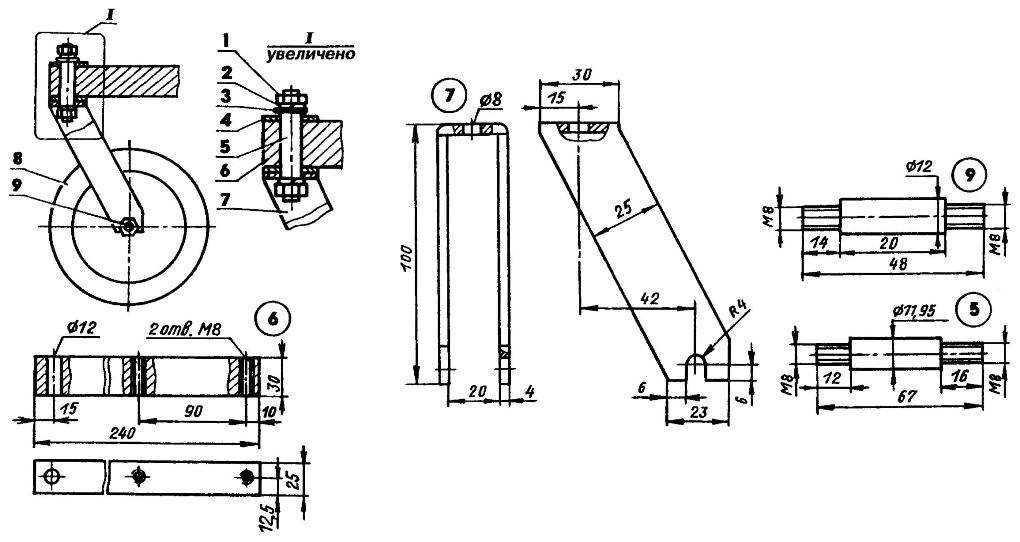 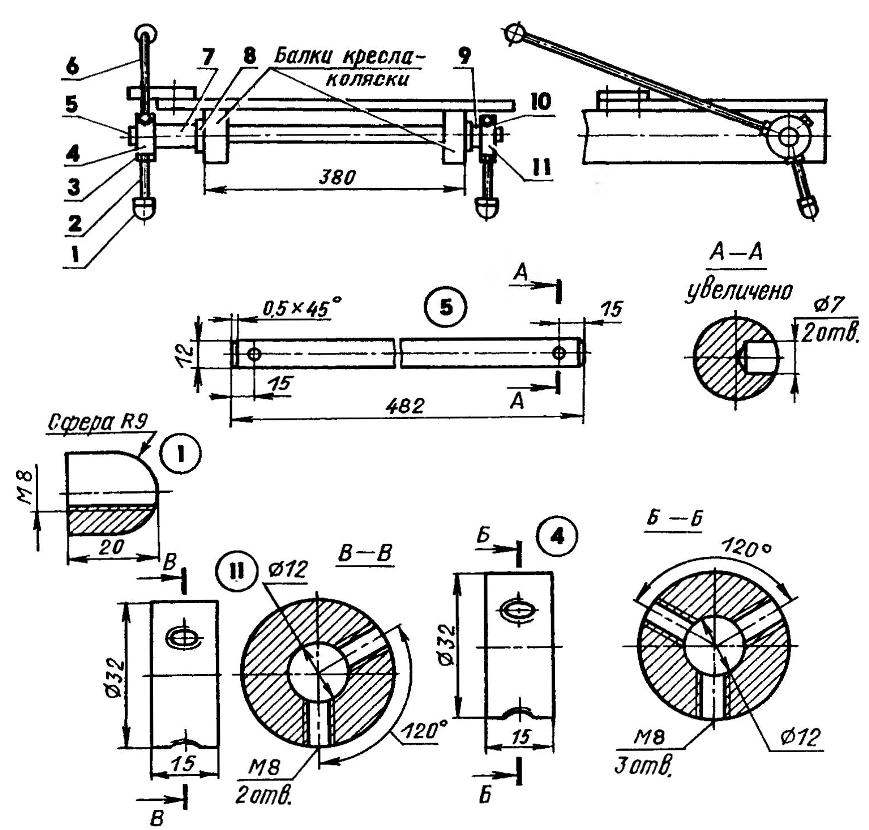 Parking lock:
1 — stop (STZ, 2); 2 — rod (steel rod d8, L90, 2); 3 — nut-M8 (5 PCs); 4,11 — right and left wheels (STZ); 5 — shaft (STZ, rod d12); 6 — lever (steel, rod d8, L280); 7,9 —spacer sleeves (pipe 17×2,2, and L42 L10); 8 — washer 12x24x2,5 (2 PCs.); 10 — locking screw M8 (2 PCs.)
Part of the wheelchair was made by me in this order: arms, nodes steering wheel, the rack, the shaft of wheels, the auxiliary locking pin, clamps, armrests, bolsters, footboard. Hence the sequence of the description of these nodes. So, the boss arms made of solid beech wood (birch), railings — from strips of water-gas supply pipes, which are molded into the weld nuts fixed in there for the loyalty and even a drill around the circumference. To the frame of the chair (back) handrails attached through bolts M6 with semicircular heads.
The size of the nodes steering wheel depend on the size of the wheels themselves (in this case the diameter of 120 mm and a thickness of slightly less than 20 mm). All axes are turned on a lathe. Billet forks are carved from sheet steel in such a way that each of the bent forks the offset of the wheel axis from the swivel axis was in the range of 0,7—0,9 R wheels (you can bend forks and from strips of steel, but are less aesthetically pleasing).
The cantilevers chosen from the condition that the rotary wheel would be able to make a complete revolution. The console is made of duralumin bar. If there is no such block, then fit the segments of steel tube of rectangular cross section. But then — the holes for the pivot — insert a steel sleeve.
The rack is made of segments water gas pipes, which are assembled and then fixed cores on the circumference of the weld nuts M6 (exactly the same as in the arms, so the drawing is not provided).
The length of the shaft running wheels is selected so that the wheelchair relatively freely down a standard door. The basis of the shaft is also cut water gas pipes. Its ends are pressed on the axle, machined from tool steel u7 or U8 (in the case of other steels, such as 40CR, these parts require heat treatment — hardening).
In the manufacture of axles, some of them landing sizes have to be checked with the ball bearings and cones out of the bushings of Bicycle wheels. Well, the axle passes freely through the sleeve, their flanges on one side was reamed to a diameter of 12 mm After setting the wheel to the shaft of the threaded pins clipped closed with plastic stoppers from champagne, who have a good hold on the lock nuts and their camouflage.
In the manufacture of the Parking lock of the lengths of its lever and rods were chosen such that before the first patient was reached without difficulty, and the second in its working position provided for lifting the wheels above the floor to a height of 3-5 mm.
Each of the locating blocks based g tion of the chair drilled five vertical holes for M8 screws: two rear — for mounting consoles, three front — for the attachment of beams and one — screw M6 mounting rack(top rack are fastened with screws M6 with round heads that were driven through the plywood seat and a tubular frame of the chair). Between the cradles, consoles and beams placed bushings-spacers. They need to be able to adjust the swivel wheels, which should have complete freedom, and to expose the gaps under the road wheels when in the working position of the Parking lock.
The armrests are installed to the side between them and the tyres were gaps of at least 40 mm.
Bearings suspension and axle steering wheel is covered with grease tsiatim-201.
If a running wheel is needed in the back, with them moved back and strut (in the middle hole of the locating blocks of the base). There are moving beams and plywood, the focus of the Parking pawl (it is attached to the beams with screws). And here is the console with the swivel wheels are moving forward. They bear footrest.
All these movements it is easy to implement since the diameters of the locating holes in the locating blocks of the base of the chair and the distance between them for beams and consoles are the same.
A. MANGUSHEV, Stavropol