Komsomol construction project of the century called the Baikal-Amur mainline, the first group of builders which came here directly from the XVII Congress of the Komsomol. And today from all over the country to impact the construction site go to the envoys of the League, comes appliances. Go further miles of railroad tracks, and the entire path will reach 3 thousand km with extra: taiga jungle and mountain ranges, permafrost — in the most difficult conditions, requiring not only the labor heroism, but also continuous innovation, bold engineering solutions, modern technology.
In many parts of the route of courage to operate different mechanisms, created in the design Bureau of Gastrojejunal of the Ministry of transport construction of the USSR: a powerful tractor and the tracklayer cranes, machines for assembling parts of the track and shpalopropitochnyi; tested designed specifically for permafrost vibro machine for installation support contact network.
One of the original works of young engineers that design Bureau — a combined course for car — were shown at the Exhibition of achievements of national economy of the USSR and awarded medals. Our special correspondent at the USSR exhibition of economic achievements B. Rawski met with the chief of the Department Bureau V. A. Baranovym and sector head V. A. Smirnov who participated in the development of this device we offer to today’s young innovators, participants NTTM.
You can imagine the surprise of drivers, when waiting in front of the closed gate at the railway crossing, the appearance of the train, they will see racing on the tracks with a distinctive wagon rattling at the joints… the car.
Yes, regular Board machine, exactly the same as and lined up in single file on the highway move — on was familiar and that the familiar “rubber course”: an ordinary pneumatic tire. How did she end up on the rails and how miraculously kept on a narrow, polished by the compositions of the silver “blades” of a railway track? What it is — a publicity stunt? Combined shooting for Comedy film?
However, even more surprised seasoned drivers when the mysterious car suddenly slow down on the move, and the driver jumped out of the cab, something will magician near the radiator and the body, and in a moment the car suddenly swerve off the rails on a highway, and now she sped by him, leaving aside the empty railroad tracks.
THE DRIVER WITH THE “RIGHTS” OF THE DRIVER
Something like this could obviously be observed in the tests of simple attachments to the cars developed in design Bureau of Gastrojejunal of the Ministry of transport construction of USSR and shown recently on one of the thematic exhibitions of the USSR. Any machine equipped with them, while retaining its basic quality, acquires a new, unprecedented for this type of transport: ability to travel on the rails and move along them with almost the same speed as on the highway.
It is not excluded that for the first time this idea came up by the drivers in the weary hours of waiting loading and unloading at freight stations: drive a car on the rails but its progress to the destination, and then again moved out on the road — and soon the goods on the spot, without unnecessary transshipment at the stations and wasteful downtime.
Anyway, this idea occupied the minds of inventors for a long time. There was a transportation paradox: if the engine on the highway there was absolutely nothing, here’s a vehicle track right there would be the case no less than on the roads. This need has not disappeared with the advent of diesel and electric locomotives. And it was explained, in essence, one: the railroad was needed, in addition to the locomotive, a universal self-propelled unit, which you can use to perform a variety of work in their highly complex economy, but that it would not hurt while on the track, did not break his presence on the tracks “Holy of holies” — the schedule of trains.
Inevitably the opinion of the railway workers stayed on the scurrying trackside representatives friendly form of transport — car. After all, what “specialties” have no modern vehicles from the truck to the ambulance and a crane to “janitor” — the machine.
Now, if “teach” them to walk on the rails, and retaining the ability to move on the roads… Then, for example, a crane, doing work on an emergency site of the railway, to which there are no other entrances could roll off the tracks at the next crossing and back on the highway, freeing the way for the trains. And ambulance, alternating pavement with rails, would help to avoid traumatic critically ill peretekanie of the stretcher from one mode of transport to another.

Fig. 1. Car-vehicle KrAZ-257 towing… cars.
The car could replace the locomotive on just yet paving sections of railway lines, large buildings, sidings enterprises where the powerful locomotive is forced to push at times only one or two cars.
But for this, we repeat, it was necessary to “teach” the car to run on rails, confidently holding on them.
One of the possible solutions of the problem lay, that is, on the surface: to replace the car wheel of wagon. But this version was a significant deficiency in the body would need to always carry two pairs of a “change” of the wheels. And time for the conversion, installation, or removal of the car from the rails took a lot.
Were found, seemingly a more convenient option: made by type wagon wheels are smaller and have attached them right to the car. On its own, which were of larger diameter, the car was moving on the roads and on the rails — were based on the smaller wagon. But it was applicable only in areas without the “intersections”: at the arrows on the “native” wheels interfere.
In the design Bureau of Gastrojejunal managed to synthesize the advantages of the first and second method, creating attachments the combo turn.
The basis of it — a small guide rollers, reminiscent of the wheels of the trolleys. They are mounted on a kind of “chassis” — racks, attached pivotally to the vehicle frame. When racks with wheels raised the vehicle travels on ordinary roads. But here it enters the moving or specially stacked deck, allowing to drive the wheels on the rails, chassis rails with the rollers lowered and the car rides on rails, like on the highway, easily passing hands and even shunting “crossroads”, I Wonder what the driver of such vehicle, in addition to the usual driving “rights”, has also, like the locomotive engineer a special certificate issued by the railway administration.
UAZ-TROLLEY
Attachments the combo turn can be designed for any vehicle in relation to its features and track. On most machines guide rollers are mounted front and rear, and for securing them to the uprights using existing frame holes. Stand equipped with shock absorbers to cushion the rail joints and greater pressure of the guide rollers.
Regardless of whether the car’s track and the railway track, the front roller are set so that the useless rails on the steering wheels of the machine do not touch the rail. Back rely on it remaining the leading, although experiencing less stress as part of gravity assume the rear rollers.
If track car less than way, between the rotor and the hub and wheel install required thickness siritelny goals. 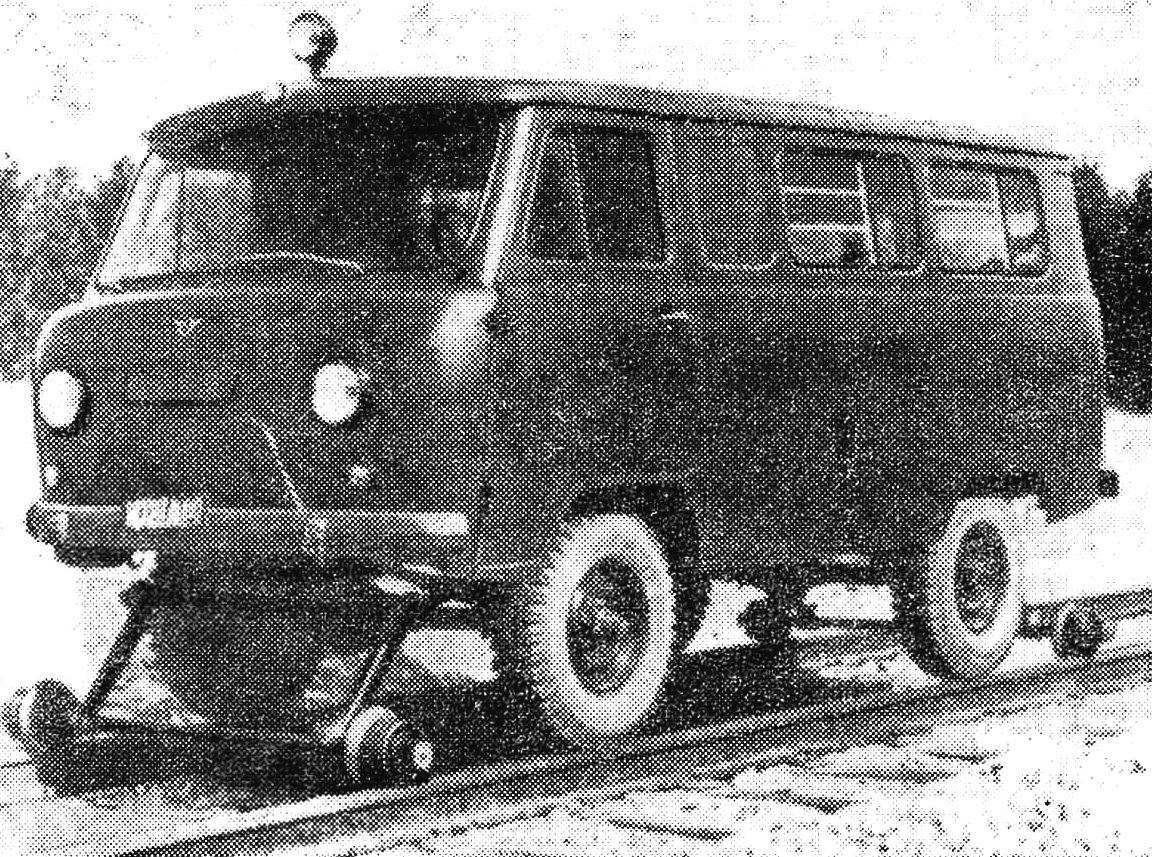 UAZ-452А on the combined course.
The most simple suspension rollers — UAZ-452А (Fig. 2). Equipped with a combined course, it can act as a trolley for the delivery of small goods and passengers to and from work, and also be used as an ambulance and a special machine for movement both on road and on rails. And on tracks such avtorezina can reach speeds up to 65 km/h. 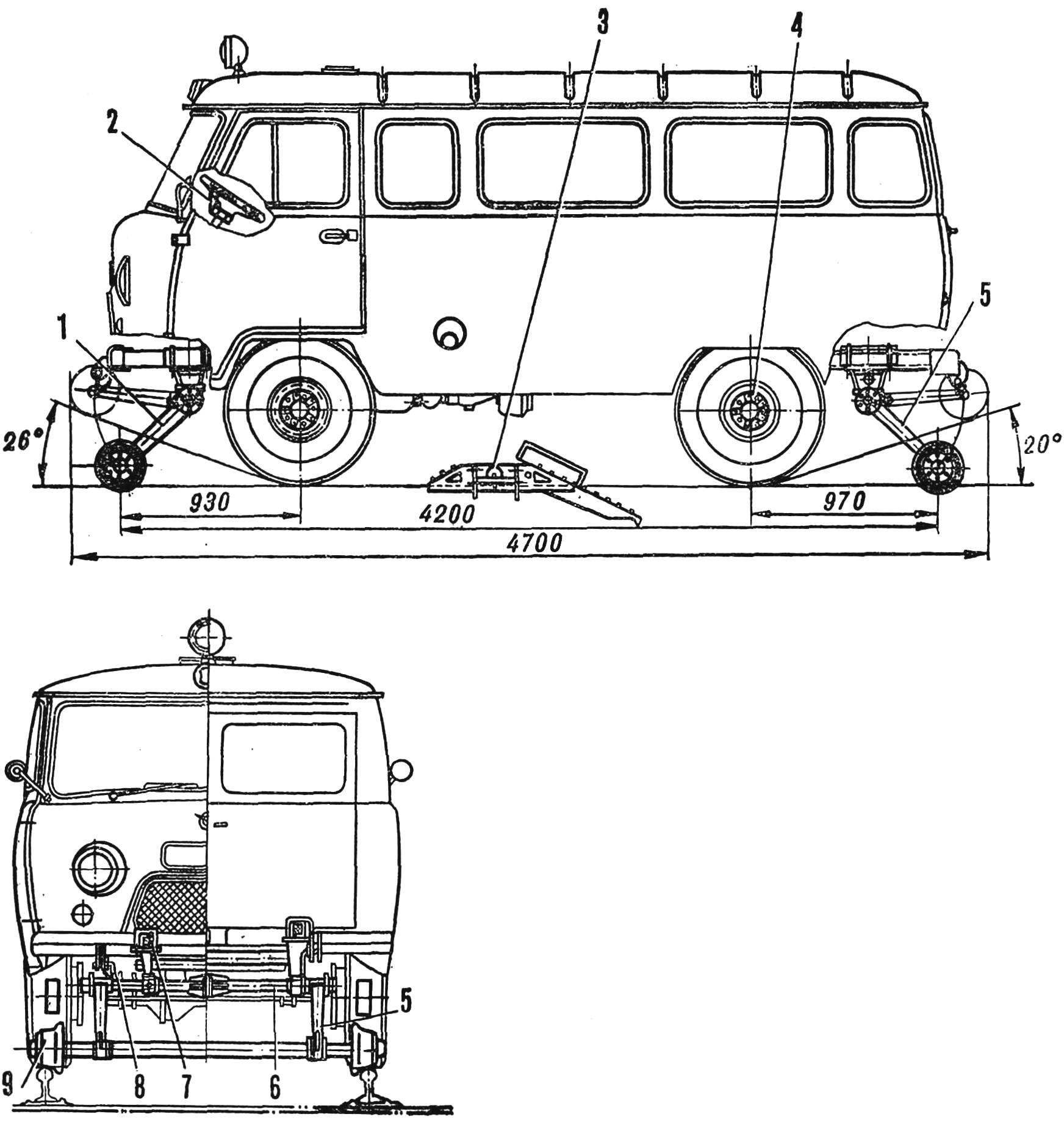 Fig. 2. Suspension scheme combined stroke on the UAZ-452А:
1, front guide rollers, 2 locking helm 3 — boots-ramp, 4 — washers for the widening of wheel gauge, 5 — rear track rollers, 6 — torsion bar, shock absorber, 7— a wooden liner in the longitudinal frame, 8 — clamp rollers in the raised position, the 9 pair of wheels.
To put this car on the rails of the driver and his assistant just in 7 min included equipment, special shoes and apparel, make it not on the move, and on any available part of the railway. Entering the shoes alternately rear and front wheels of the car, the driver and his assistant guide rollers is lowered until the latch catches, holding them in working position. The steering wheel blocked in position “directly” using fork clamp attachable to the steering column. Suspension road wheels on the UAZ-452А — torsion. The angle of twist of the torsion bars adjust their damping force and the pressure rollers to the rails. The rack rollers are mounted to the frame with clamps, and frame rails to protect them from deformation of inserted blocks of wood in — ear.
SIDE RAIL MOTOR TRACTORS
Despite the fact that the rollers take the weight of car, grip of the rubber wheels with the rail even in this case, it is still higher than conventional locomotives. Therefore, drop-side trucks on the combined course can not only carry cargo on the rails, but also serve as a rail motor tractors, that is to tow the cars.
GAZ-66, for example, can be used as a tractor for trains weighing 80 tons; ZIL-130 for train weighing 120 tons, and so heavy car like the KrAZ-257, — to 800, etc
Towing of cars cars equipped with the universal coupling, and a hose adapter to connect air brake system of wagons, controlled from the cab using the installed crane operator. 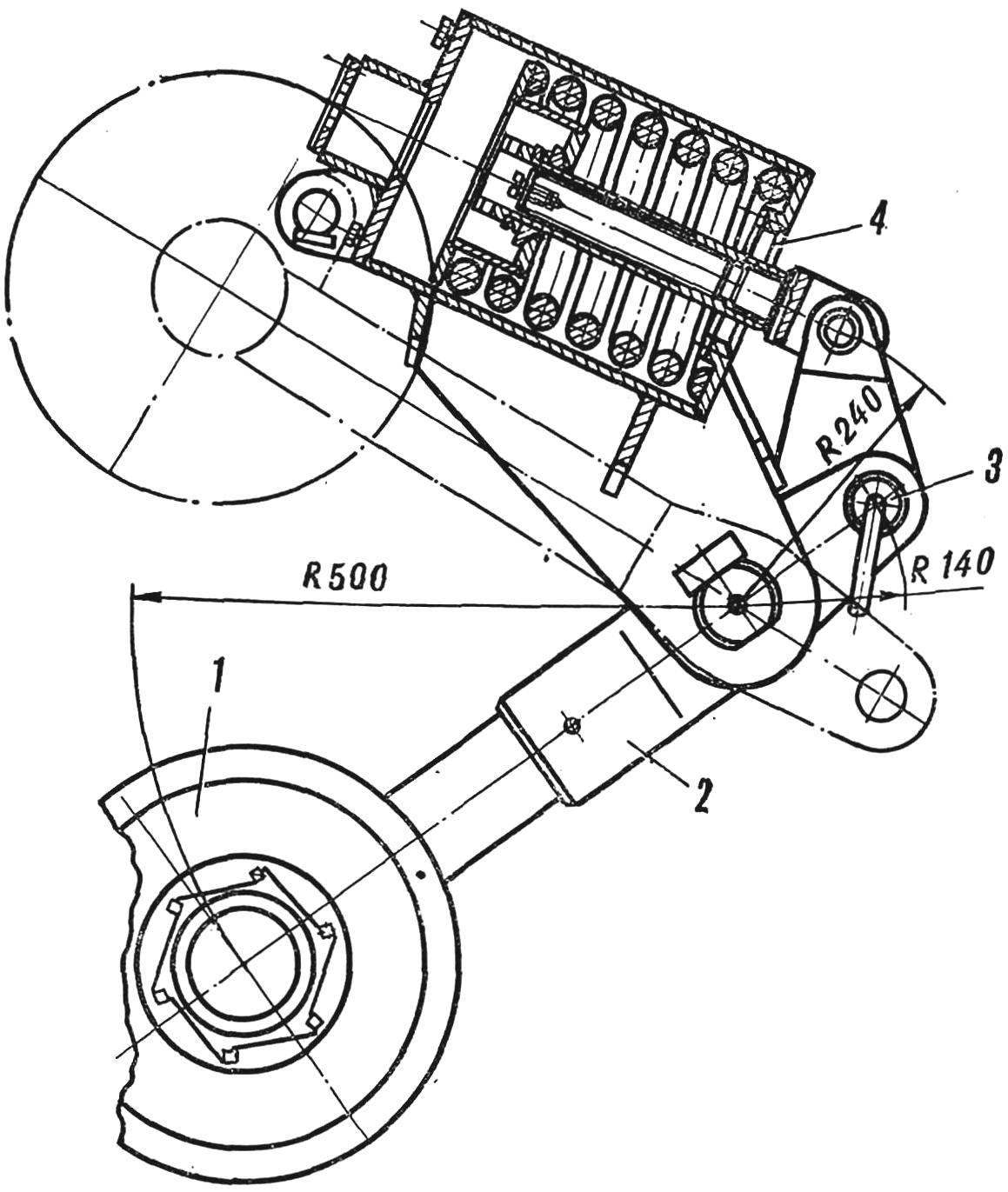 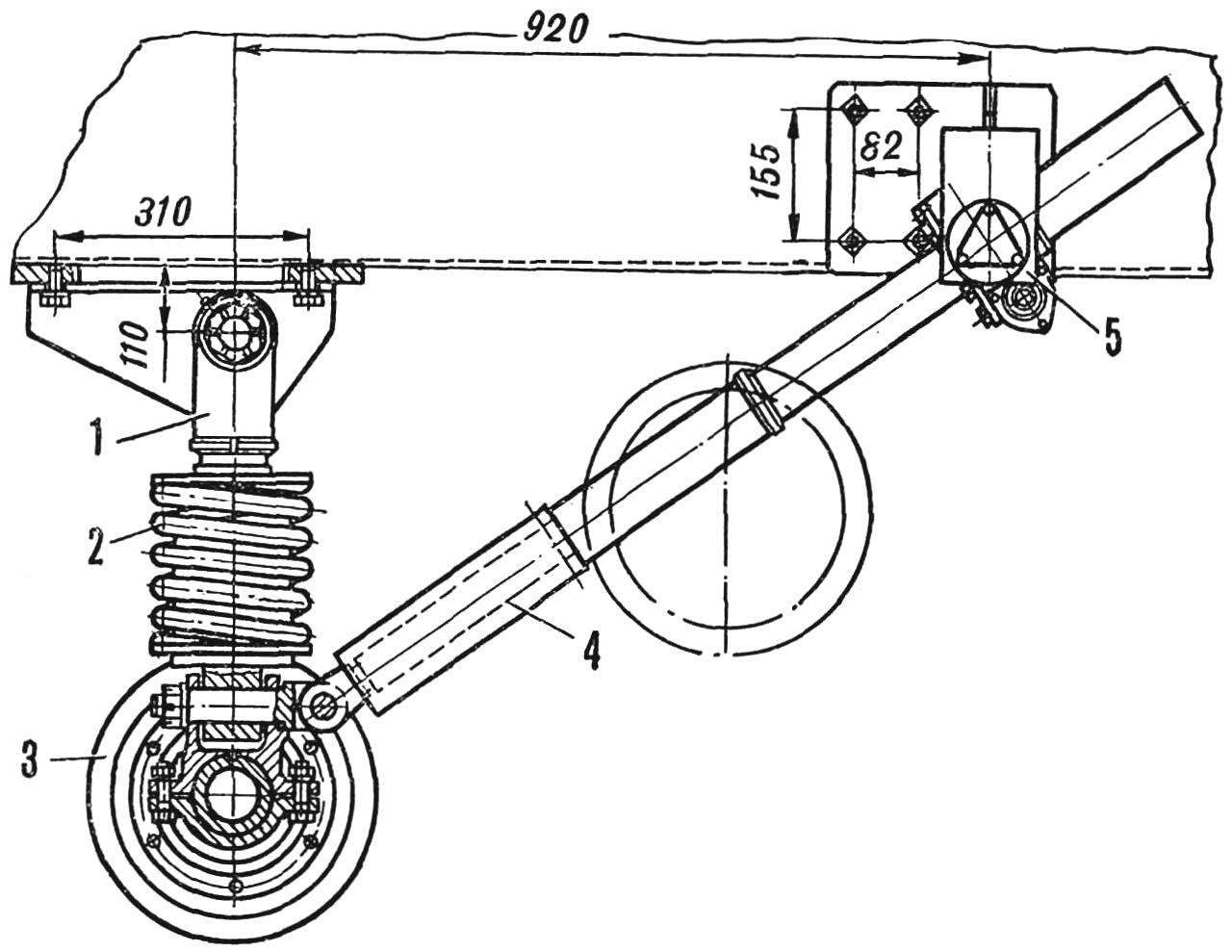 Fig. 4. Rear rollers KrAZ-257:
1 — hour, 2 — spring shock-absorber, 3 — rink, 4 — telescopic lifting housing screw, 5 — worm gear lifting mechanism Katkova pair.
Front springs are fixed with special screw rods so that the steering wheels were raised, and the load is taken to guide rollers. Their suspension of the rail motor tractors has its differences.
The ZIL-130 rack rollers (Fig. 3) are connected to shock absorbers that can be adjusted, affecting the pressure rollers. Lifting and lowering Katkova pairs is carried out using a hand winch.
Guide rollers (Fig. 4) KrAZ-257 unlike other vehicles located behind the wheels, almost under the cab. All racks and rollers, telescopic, spring shock absorbers. Raising and lowering them are made with the worm gear mechanism. Although the rail motor tractors — heavy cars, to translate them on the rails required a little more than 10 min.
On the combined course can be transferred not only listed the cars, but also trucks, cranes, rotary snow ploughs — cars wide variety of “specialties”.
V. A. Smirnov