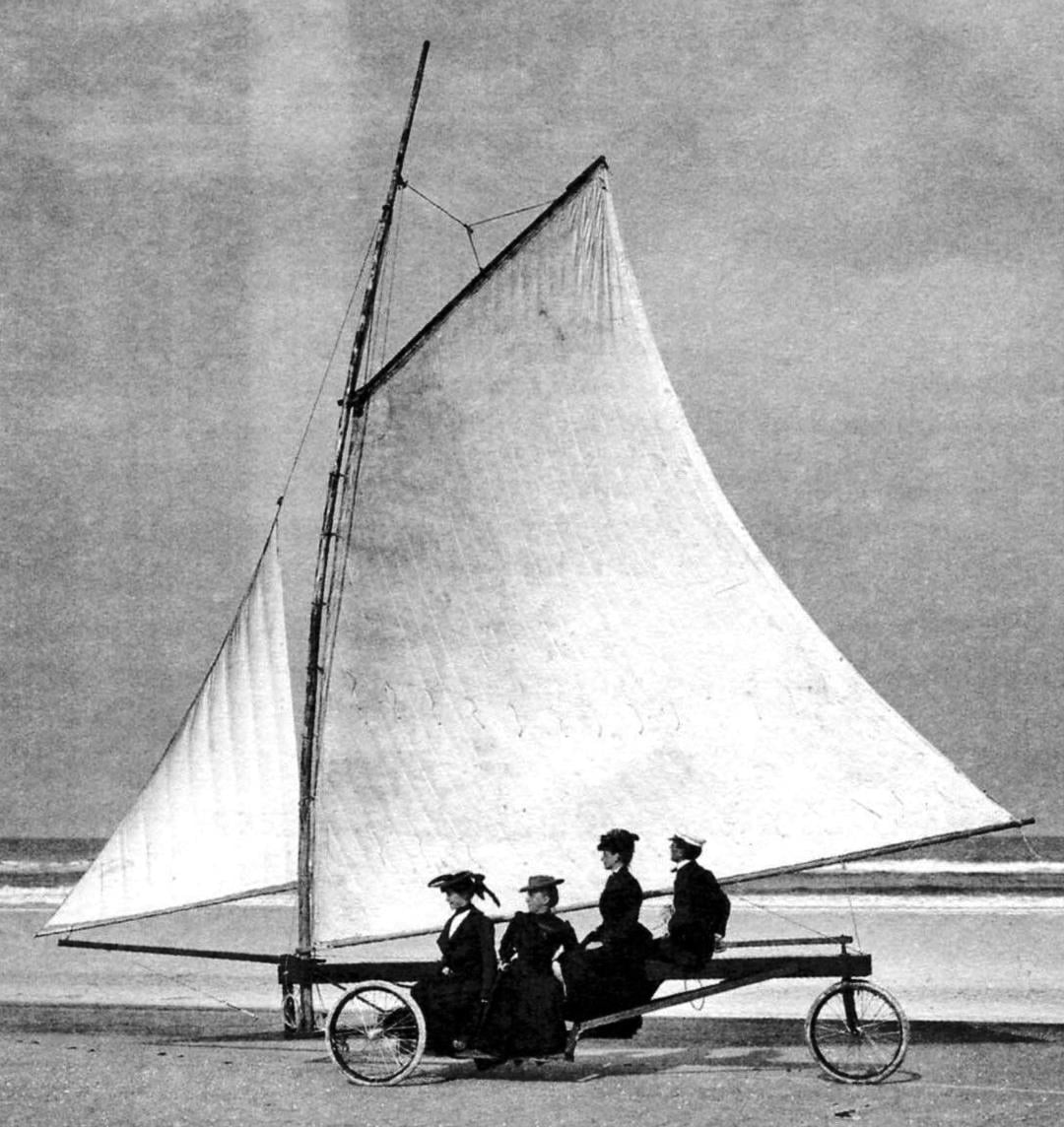 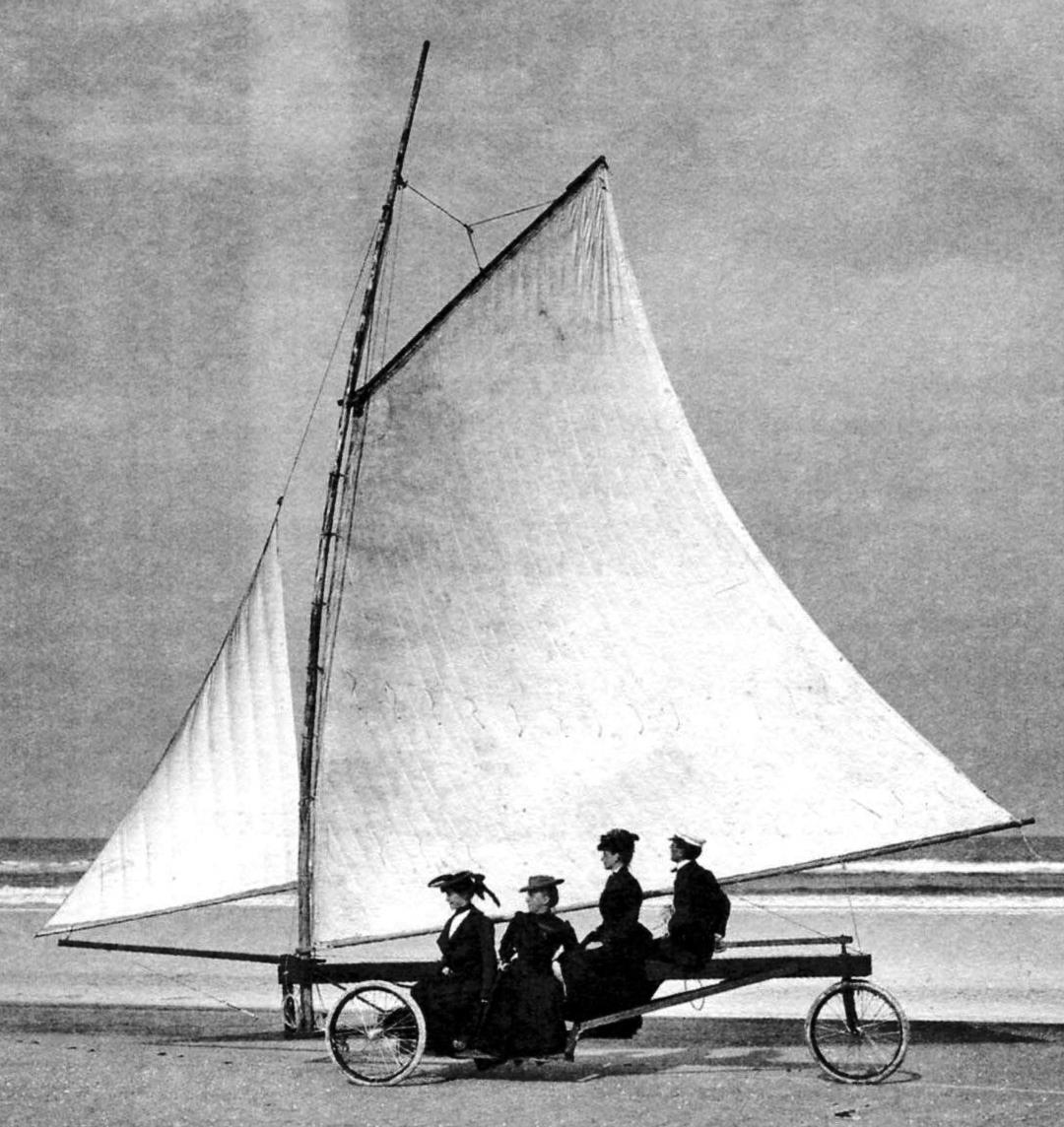 Historians say that the sail appeared on land about four thousand years ago! Fiction? No – there is documentary evidence. In 1953 the Italian archaeological expedition at the excavations of the temple of Ptolemy near the town of Medinet MADI discovered the remains of the ancient land of the sailing ship. Designed and manufactured it was under the leadership of the Egyptian Pharaoh Amenemhet III (1849 – 1801 BC). It was a rook, which floated on the Nile at first, and then mounted on four wooden wheels. Two four-meter mast stretched colored sails. The inscription found in the desert of basalt polished slab read: “Pharaoh Amenemhet III traveled from here across the desert to Medinet in a sailing boat driven by the wind.”
In ancient Russian Chronicles, found the description of the campaign of Kiev Prince Oleg with a team to Byzantium in 907. The Greeks closed the entrance to the harbour of Constantinople with a chain blocking the way Russian courts. “And Oleg commanded his warriors isdelete and vosstanovite wheel ships… and idyashe to the castle.” With a fair wind the ships on wheels rushed to the city by land, bringing the enemy into horror and confusion.
Plains of the sea coast of the Netherlands and the constant strong winds blowing from the sea, has prompted the Dutch mathematician Simon Stevin (1548 – 1620), was the idea to use the sail on land. Enlisting the financial support and patronage of the Prince of orange, Stevin in the year 1600 built land sailing, dubbed the “Hague miracle.” Despite the opposition of the Church, considered the invention of the “devil’s work”, Stevenw managed to organize a regular on the Dutch coast between the cities of Heveningham and Petten, lying from each other at a distance of 60 km, the Wagon could seat up to 20 passengers and has a top speed of about 30 km/h.
During the first Railways in the coastal areas of Canada along the rails at speeds up to 50 km/h cruising cars, equipped with masts with sails and driven sailors. 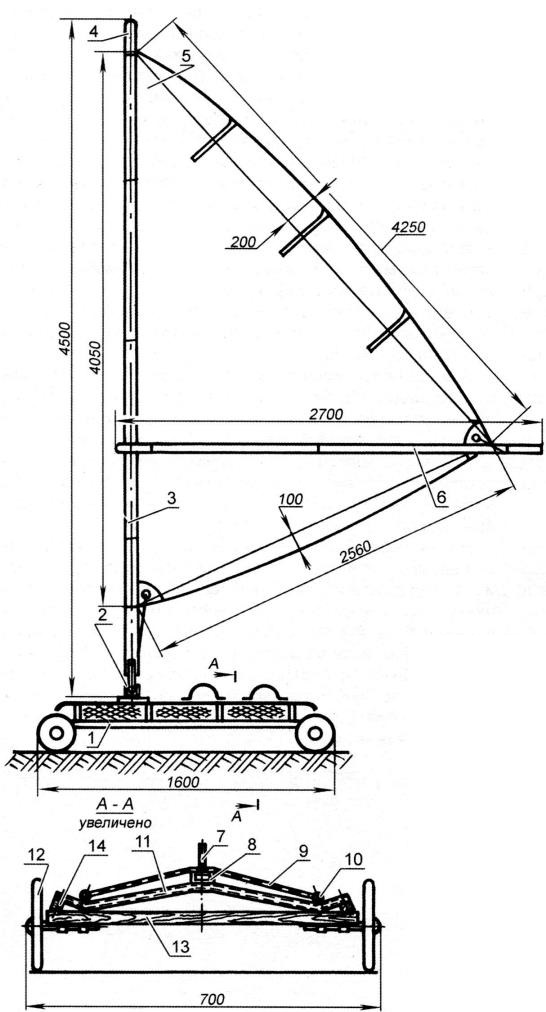 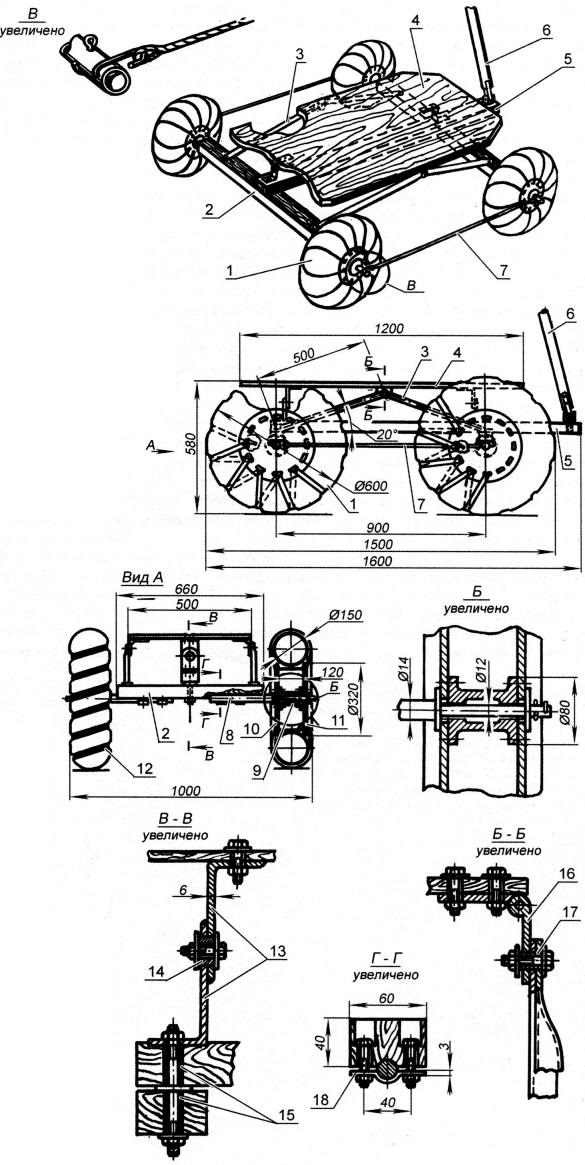 In our country for a sailing message on land called K. G. Paustovsky. “Don’t think me a dreamer – he wrote, – but the winds of the desert should be used for the purposes of transport. I have not found yet the exact embodiment of the idea, but I imagine sailing the message in the sand, where there is no vegetation, no settlements, no mountains and nothing can prevent the movement.”
“Sand sailing” or “beach yacht” was the title of a new sports equipment – light single wheel yacht. Their body is made of plastic, shaped like a hook, is provided with three wheels from light aircraft or motorcycles. High triangular sail is controlled by the boom-sheet. Stop by a special lever rests on when braking in the ground.
Might sail on land destined to a great future, but today such designs are mainly used for sport only.
Recall that in 1960 created the international Federation of the wheel of the yacht. Since then, regularly hosts the open championship of Europe on speed, time, exercises in slalom and acrobatic riding at speeds up to 50 km/h On a wheeled yachts reach speeds up to 200 km/h Start of competitions and training is held on the sandy beaches, the airfields and even in the deserts.
Another use of the wheel of the yacht far, thousands of kilometres of lowland steppes and deserts. Moreover, a sand yacht can withstand huge loads, much larger than their aquatic relatives. The first long-distance expedition organized by Jean de Bush wheeled yacht, took place in 1967. Athletes trekked across the Sands of Sahara 3000 km from Algeria to Mauritania.
In our country often improved multikilometer transitions on the land yacht on the Sands of the Aral sea region, the Karakum, Ustyurt plateau, in the North Caspian sea and Kazakhstan.
Barely appeared and gained strength, a new kind of sailing – Windsurfing, as enthusiasts put it on wheels. Eight years ago a Frenchman, Arnaud de Rosne for 12 days running went on a trolley under a sail from a windsurfer 1300 km on the Sands of the Sahara desert. Already are world Championships land Windsurfing on the dried salt lakes in Tunisia.
New hobby – riding on a wheeled cart sail by land is easy to learn not only to those who know how to ride on a sailing Board, but even a man who’s only going Windsurfing.
Simplest land windsurfer you can build with little cost. In the manufacture of the hull of the windsurfer on the sides of mounted wooden bars cross-section of 40×60 mm and length of 1200 mm will need two cross bars of the same cross section length of 600 mm, serving for attachment of the wheel axles. For suspension, it is preferable to use inflatable wheels from a child’s Bicycle or scooter, it is permissible to take from a baby stroller, but in this case, the course of the sailboat to be more severe. The mast of a sailing cart may be collapsible or regular sailing Board.
Design of axles and mount to the body on their wheels depend on the characteristics of the used wheels. To carry both in each case is not difficult. Unassembled package dimensions rider not exceed 1500x300x200 mm, with total weight 14…16 kg allows you to move it to one person.
Wheeled windsurfer it is good to ride on paved, closed to traffic roads, sandy beaches with Packed sand and, of course, steppe and desert plains. Rubber tires provide enough traction and asphalt in order to move the cart at a fairly acute angle to the wind. Turns on a simplified truck can only do this with a stop, moving it in the desired direction. For braking enough rustravel sail in the wind, tramp the near rear wheel. Similarly, it is convenient to slow down when the rear wheels protrude slightly above the platform. The front wheels can be the same or larger size.
When lessons on sailing the truck and when driving at high speeds, do not be redundant knee pads, elbow pads, hockey helmet or the motorcycle. Experienced surfers learn to drive the boat about half an hour, and, conversely, who know the management skills of sailing a cart then quickly “tame” a sailing Board.
For use sailing truck on land in more difficult conditions flat terrain and designed her design, she should be able to do turns on the move and to go around various obstacles.
For windsurfer of the increased passability and maneuverability, can be used the camera from the “quilted” children’s scooters, go-karts, mokikov, light vehicles, mounted on reels made of plywood with thickness of 8-10 mm. the wheels are attached with M6 bolts to bronze or brass bushings, which are bearings. A thick grease is laid in the bushings when you install them on the axis. Axis steel, hardened. Mounting wheels on axles is carried out by washers and cotter pins. Nylon ribbon 3×25 mm cross-section or a cord cinches the camera are passed through holes in the discs in such a manner that the surface of the chambers in contact with the road caved in under the action of the tape on 15-20 mm.
To swap cameras in the outer disk has holes with a diameter of 40 mm: they skipped the nipple connected to the hose of the pump. The air pressure in the chambers is maintained in the range of 0.3 – 0.4 kgf/cm2.
Such wheels perfect shock absorbers that protect the truck from strong aftershocks. Furthermore, slightly inflated chambers provide a good stability not only while driving straight, but on turns and slopes. 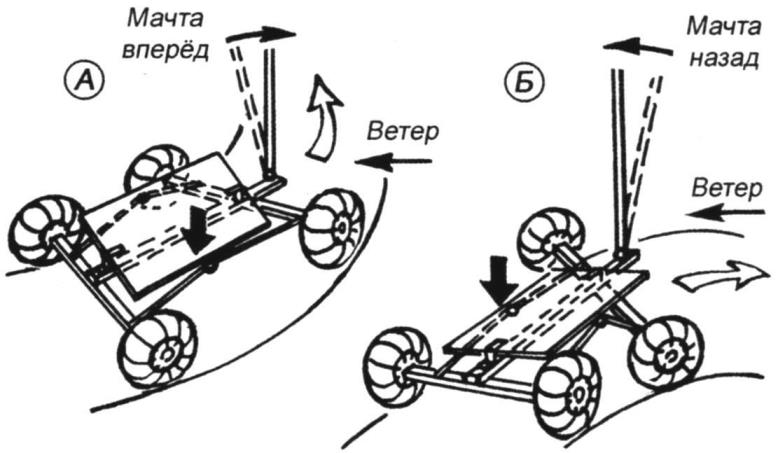 Scheme turns:
A – turn “uvarivanie”; B – turn “Ghost”
Riding on wheeled windsurfers at the bottom of a dry lake 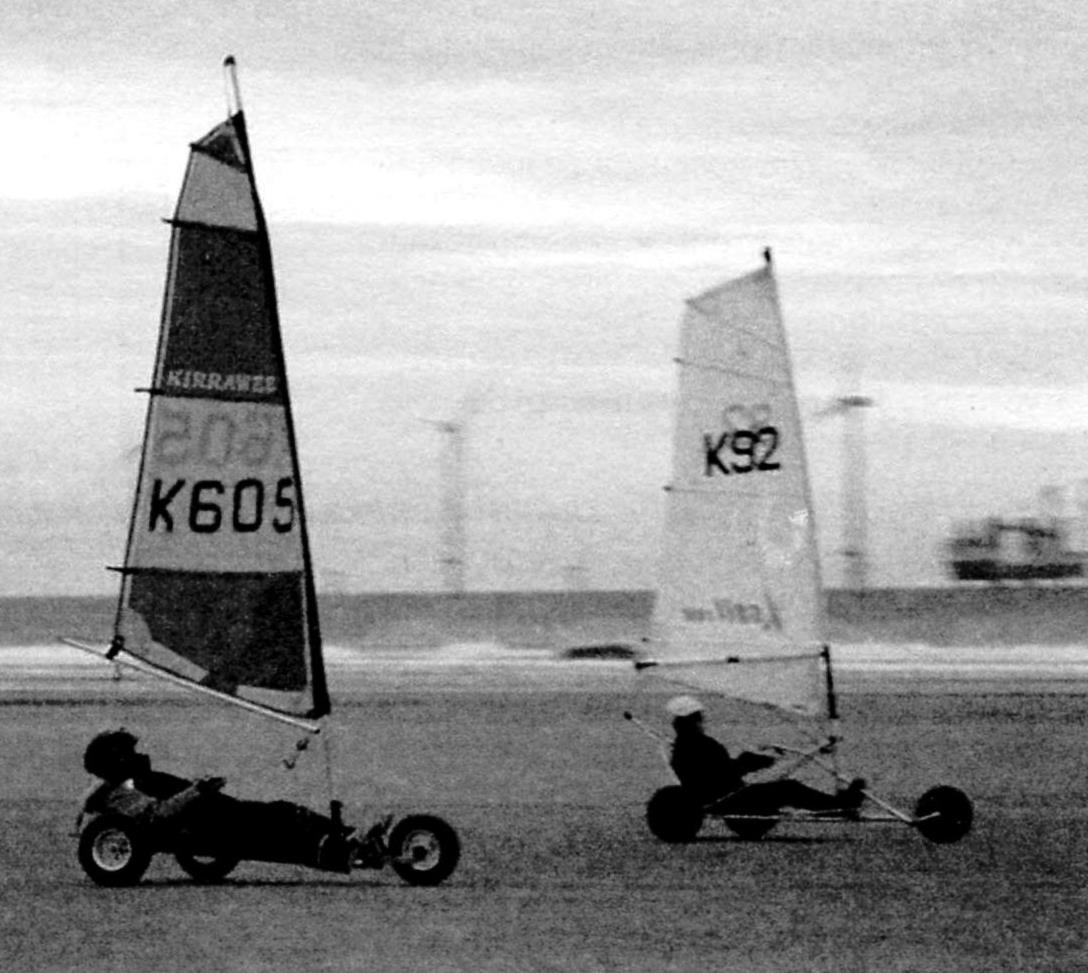 Race land sailing on the foreshore (England)
Unprotected camera of low pressure appear to be so vulnerable that it is difficult to decide to apply them to land windsurfer-terrain vehicle designed to travel on rough terrain, and even with great speed. However, the operating experience confirms their reliability. Vehicles equipped with similar wheels were made long trips, even in the Arctic (“M-K” № 5, 1984). For wheels you can pick up soft tires with deep tread and “shod” in camera.
On the basis of the trolley is installed on the hinged platform, and it has the ability to bend in both directions from the longitudinal axis of the truck. At the ends of the base on a vertical axis mounted swivel boards with wheels. At the front end of the base is fixed with a hinge of the mast.
Platform truck with two sides pivotally connected rods with the inclined turning bars in such a way that when you tilt the wheels on one side of the truck apart, and on the other – converge. For example, moving a course close-hauled starboard tack (Fig. A), the athlete pushes the foot on the right edge of the platform and the mast tilts slightly forward, causing the wheels on the right side diverge and converge from the opposite – wheeled windsurfer starts turning to the left (“uvarivanie”). Push on the opposite edge of the platform, tip the mast back slightly – turn to the right (“casting”), (Fig. B).
To rotate to the left when driving course. it is necessary to tilt the platform to the right, and Vice versa. During emergency can turn to make a maneuver sail, but only to put pressure on the edge of the platform opposite to the rotation. So are the turns and swerving when driving on land windsurfer.
For braking on the course the wind is sufficient to obezbediti sail, sharply putting it in position, head to wind, sharp course – to weaken the craving “Shkotovo” hand sharply to make a sail against the wind; the truck having low weight, has a low inertia and stops almost immediately.
To improve the stability of the platform, to the ends of the axles, attach the rubber shock absorbers. Their elasticity is chosen empirically: higher it is, the more force must be applied to the edges of the platform to rotate the truck.
All hinges truck connection inclined linkage rod with the platform and with the turning bars, the platform with the base – run on the M6 and M8 bolts, which are provided with spacers, to prevent the “dumb” delay of these compounds.
The hinges connecting the base and swivel the bars consist of studs M8 spacer bushings and the intermediate washer, the latter eliminates the “biting” of the beams with each other. All the nuts are fixed on the bolts with cotter pins. Oblique thrust are made of duralumin tubes with a diameter 22×1 mm, flattened out and bored at the ends.
When a sufficient volume of truck wheels can be mounted pivoting centerboard and hoisting the lucky fin, turning the land windsurfer amphibious. With a favorable wind and a sloping beach he will be able to move out into the water and overcome sailing large bodies of water in the mode of Windsurfing.
Wheeled windsurfer has a small own weight, and its tilting in all directions the mast “system with a free sail” – allows the athlete to set sail at the optimum position relative to the wind and get maximum traction that allows the windsurfer when fresh wind to move through rough terrain better than wheeled yachts of traditional design.
N. SHERSHAKOV