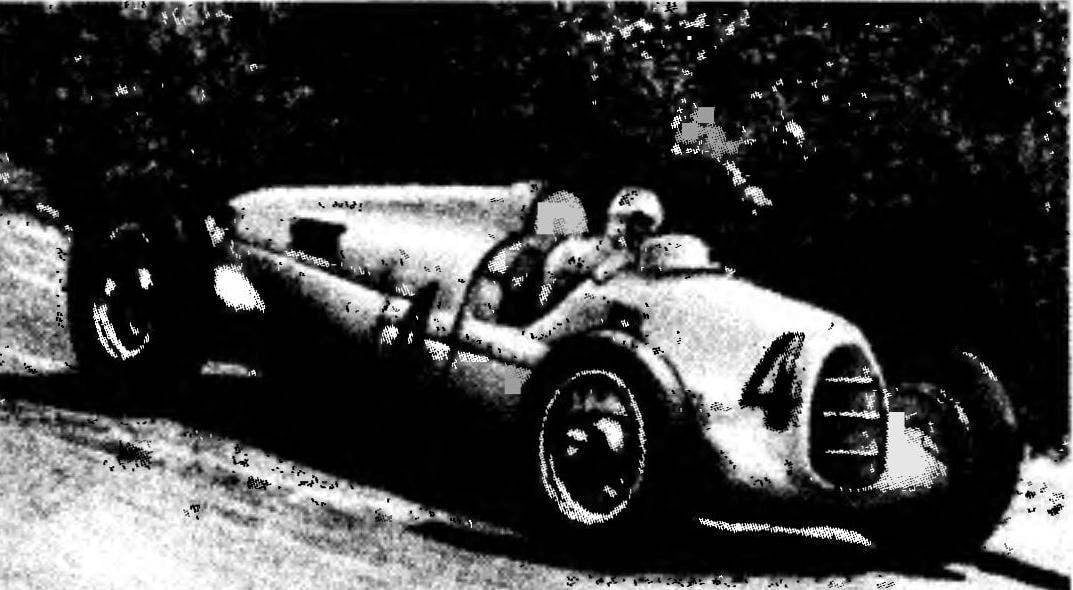 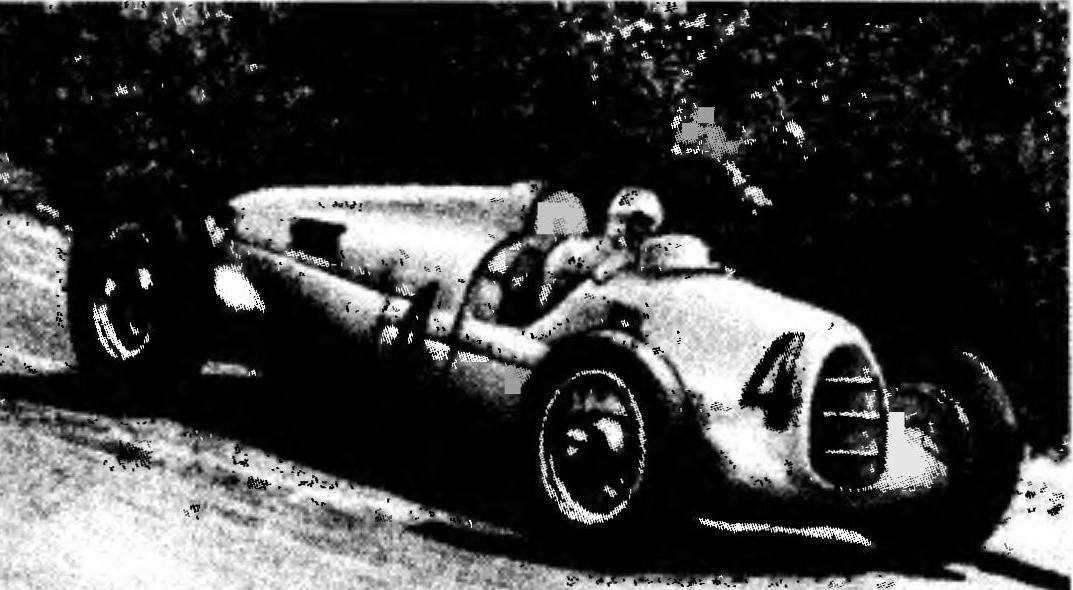 Now, when the time for establishment of school of a subclass of car “E”, in most circles, the problem of designing and building simple micromachines no longer exists. Thanks to the experience gained with it without struggling and novices. However, all this is legitimate when it comes to simplified likes, not tied to specific vehicles, and even the choice of the optimum scheme of the chassis models of any type and class. When the boys, having studied the basics of avtomobilestroenie, go to E-polyopia in front of them immediately raises a number of questions. And no wonder — the level design here on the head above.

To help children in transition, and aims in today’s post. It is dedicated to interesting and unusual model, very accurately reproducing the external forms of the famous racing “car” thirties “Auto Union”. Machine-prototype deserves a separate discussion. And now — about her mikrobloge.
First, let’s meet suspension new cord “trains”. Despite the fact that this is the most important part of the model largely determines the success in sport has already been well established, in our case it had to design from scratch. The fact that the car-the prototype had a much narrower rear bodywork where the copy didn’t fit any of the known Moto installations modelismo type. So I had to place a large and reliable motor brand MP-2-007 near the driver’s cab and the axis of the shaft, to guide along the longitudinal plane of symmetry of the machine. It’s a little complicated rear wheel drive, but the improved weight distribution of the car; there was a possibility of installation of the motor of any brand, regardless of its size, as well as the transition from simplified to more drives professional sports options.
We believe that we have managed to link the suspension of the plant, including non-traditional solution — double swivel joint. Front, under engine, part of this node is represented by a flexible steel or bronze plate frame, and rear — clutch, swinging in the tubular bearing and support vaysa an elongated shaft of the engine. This suspension of the plant eliminates the mechanical losses from misalignment of the individual rotating parts, and the shaft deflection.
On the technical side, the chassis model is rather simple. The basis of it is fake or aspen plate size 5x55x240 mm (blank). After processing (scale lines) on it with epoxy glued the brackets of the bearing units of the front and rear axle wheels. The brackets are best made of glued three-four layers of mm plywood. In the extreme case of ordinary plywood with a thickness of about 4 mm. Suggest before final fitting of the parts to have bearing assemblies complete with axles of the wheels. Then, by controlling the “dry” Assembly will be able to control the convergence of the chassis, and the accuracy of their installation and ease of rotation of the moving parts. It is also desirable to provide the ability to not only adjust, but also replacing the clutch, support the motor shaft. 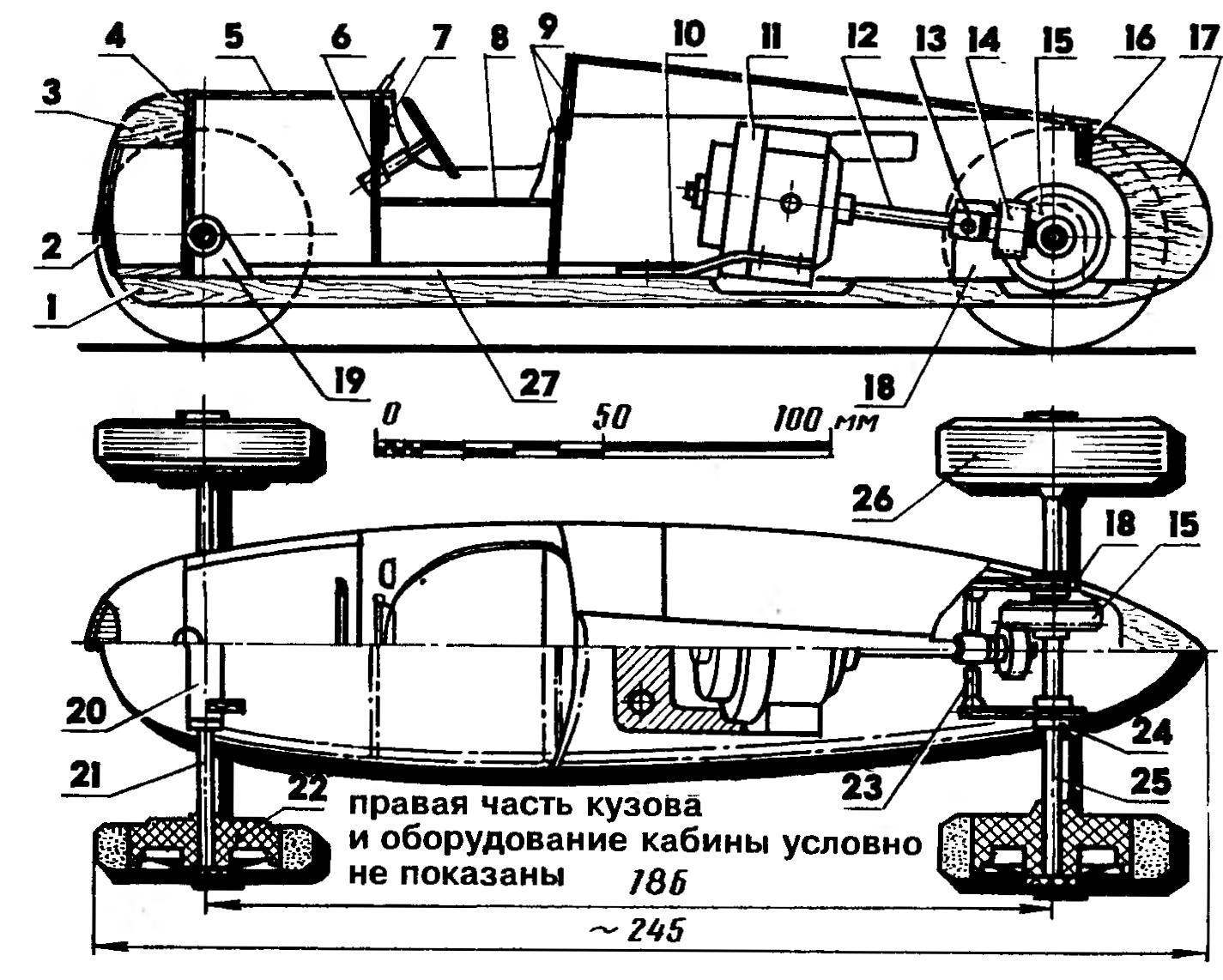 Body copy can be made in several variants. The most affordable and simple figures. It is based on the wide use of thin cardboard or glued two or three layers of Whatman paper. In this version the front and rear of the body with the maximum curvature of the surface cut from fake bosses. The middle is going out of ordinary plywood bulkheads and two rack stringers, covered with cardboard.
A more complex version of the simulation body model a hood hot sheet of plastic on the finished mandrel (one – or two-element). With this method more accurately reproduced form the copied car, but we can recommend it only to experienced modelers. In any case, the body is easily removable. It facilitates access to the chassis components when debugging and maintenance.
As for the simulation of the body as a whole, it should be noted that the level of performance of the Modeler will define mainly two zones: the front part with a grille and cab. If the latter, I hope, will not give you big problems, the first can give one piece of advice. To the grid with double curvature looked “five”, solder it first from a proper copper wire. And then “attenuate” on a wooden mandrel with a rubber clamp. Then the ends of the wire neatly, trim and adjust the grid to contour to the channel in the boss body. We also recommend you to take the time to simulate a series of exhaust pipes and expanded metal of slits of the hood of the engine compartment.
Increasing the copy number of the wheel hubs are machined from plastic on a lathe with large annular grooves on the outer sides, which are filled with Matt black paint. Subsequently, these holes are closed by the simulated spokes, made as previously described (grille), and then covered with silver paint. The impression of these wheels — gorgeous, even with small distances, it is difficult to determine that it is only a simulation.
“Tires” allowances cut from microporous rubber and after sticking to the wheel hubs are processed on the machine to the required size. Fixing the wheels on the axles — epoxy resin. Front axle is painted with Matt black paint. But the light of simulation nodes in the front suspension will visually dominate.
The body after finishing and polishing conventional with silver paint mixed with nitrocellulose lacquer or better still with two-component parquet composition. In this cover painting small parts glossy “chrome” will look more impressive. Lettering and logos are made by “prevodilac”, which excludes marriage and re-painting the whole vehicle in case of unsuccessful application of the elements of decoration using stencils.
Electric motor brand MP-2-007 (on it we chose) is subjected to minimal modifications. In its plastic case and back cover are cut ventilation Windows, and drilled holes with thread for mounting plate of the suspension frame. The armature shaft is replaced by a longer (in an extreme case it is possible to increase), and collector — for more heat-resistant. Plate brushes are complemented by a copper-graphite sticks, which are soldered after strapping non-working areas of thin copper wire.
Before installing the model engine “driven around”, and, if necessary, in case zapressovyvajutsja bronze bearings of the armature shaft.
V. ZAVITAEV, group leader, Moscow