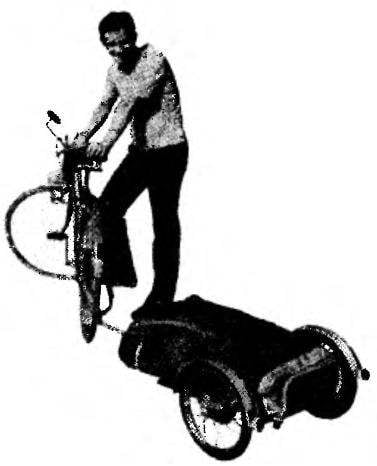 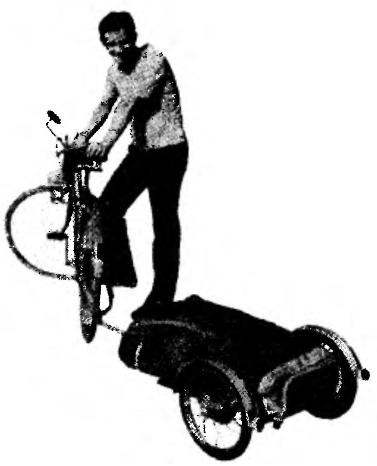 On a conventional two-wheeled Bicycle much gear not to take, even if it is equipped with a trunk. Meanwhile, the need from owners of these machines frequently. It is therefore advisable to make to the bike trailer.On the construction of such a two-wheeled trailer said Zbigniew Hyun-nel and Andrew Fedoruk in the Polish magazine “Mlody TECHNIK”, article from which prepared this publication.

This lightweight and cute trailer attractive by the fact that it can be manufactured on a workbench in a home workshop, as components are made without any machining operations (turning, milling) and without application of a common tool, which have any, even the novice samodelka. However, the wheels and hitch will have to use ready.
But the wheels can be taken from old children’s bicycles (better front brake without bushings). The hitch will fit the hinge rods any car. This detail (or rather, a node) can be found at any service station: repair they are not subject to and entirely replaced with a new one if they found even a small gap. But as the coupling device of the trailer even with used parts is quite good, and they are even better than new — they are easier to move.

The basis of the trailer — frame made of two pieces of dural tube (it will fit the pipe from the frame of an old cot), stacked in the shape of the letter T. the Joint is made as follows. At one end of the longitudinal pipe-drawbar hammered round lumps of solid wood and here half the diameter of the semicircular cut out groove-saddle. The same chock hammered and the inside of the crossmember up to the middle of its length. The top is in place on the crossmember overlaps the saddle pole, in the center of the joint is drilled diametrically through-hole and the parts are held together with M6 bolt with a washer under the nut. 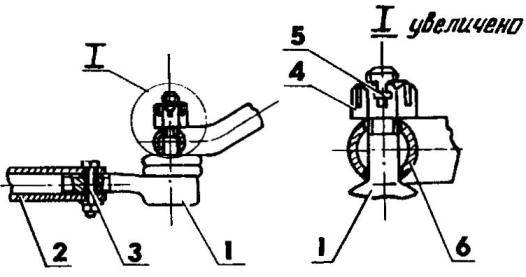 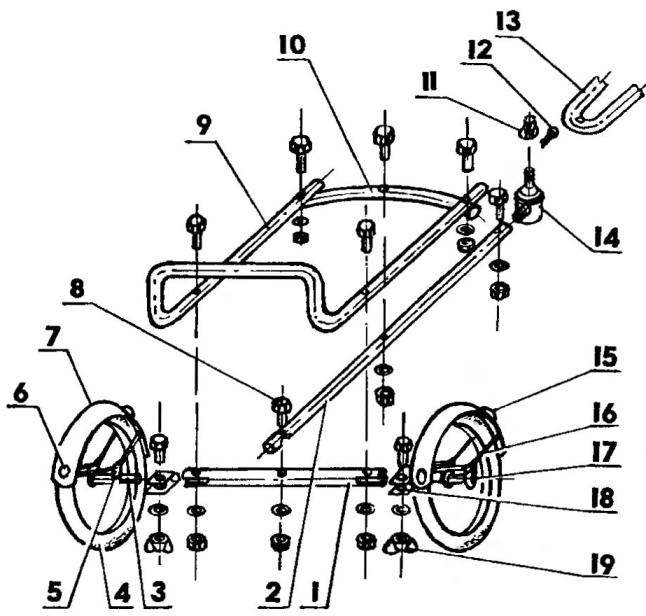 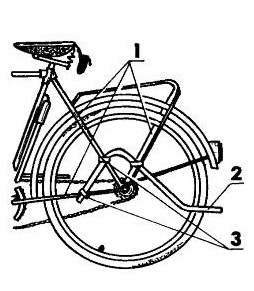 The mounting of the arc is thrust to the frame of the bike:
1 – Bicycle parts-tractor; 2 — arc-thrust; 3 — clamps (6 PCs.)
At the other end of the drawbar is screwed to the tip of the coupling device. In both parts also drilled diametrically of the bolt hole M6, and the details they incorporate. By the way, it should be noted that the Assembly of all construction elements produced by the same bolts, except where noted.
At both ends of the crossbar are mounted wheels. As already mentioned, the wheel is ready. Here only the axis of the right rod will have to make other, longer 30-40 mm and threaded elongation. The ends of the crossmember at the same length it is necessary to make slits in the walls. Since the diameter of the axle is significantly smaller than the inner diameter of the crossmember, then screw on the axis of the transition sleeve. They can also make the most of the suitable pipe sections or to use as bushings on a protracted couple of cones from wheel bearings on each axle. The bushings on the axles to prevent unscrewing the fixed pins. If we apply the cones, then you can do without the pins, the extreme cone will serve as a lock nut for the inside. The ends of the cross member is put on the bushing and tightened the knots with bolts using pre-made of 2 mm sheet steel brackets. For fast mounting of wheels of the nut on the bolt, put the wing.
After that the trailer frame is fixed at three points of the frame — two on beam and one on the drawbar. The frame increases the rigidity of the frame and forms with it the slatted bottom of the body. If necessary, the bottom can be made and solid, of light sheet material, securing it in the same three points HB body shell.
If desired, above the wheels with a simple axial brackets and handles you can install mud flaps-wings from the same bike and wheels. They will give the trailer a finished brand.
Since the transverse dimension of the trailer more than the bike of the tractor, the front fenders are installed the white reflectors, and red to the rear.
To tow a trailer with a bike on the latter is mounted a simple traction device. It can be from the same pipe, and the frame is in the form of an arc. The tapered ends of the pipe, they drilled holes the diameter of the axle of the rear wheel, which they put on regular nuts. To hold the arc in a certain position it is connected with a wire stretching to the trunk.
If the ends arc attached to the axle under the regular nut is impossible, then by making the arc longer and turning down in the form of the letter G, you can pull the ends to the tube seat and chain forks of the Bicycle with clamps or wire twisting. In this case there is no need in installation of stretch marks.
For riding on wet roads and for protection of cargo from rain should make a waterproof cover lay-comaudio non-woven material.
The dimensions of the parts are not stamped because everyone who is using the idea, you want to repeat the design will depend on its capacity to choice of materials and details.