As soon as the first snow fell, it became clear that the house has no need of such cargo winter vehicle as a sled. Child’s sled for a long time “went” on a well-deserved rest in a pile of scrap metal, and weak they would have to carry the heavy loads.

Had to take up the manufacture of the new sledge, so to speak, economic — stronger and more adapted for the transport of goods (Fig.1).
In the far corner of the yard under a shed at the scrap yard found a prudently stashed just in case the arms from the backs of the steel beds and some thin pipes.
During the manufacture of these sleds in my head swarmed with a set of structures serving this purpose and not universal and specialized. But about them later.
In the design of the sled allows for such solutions.
First, that at rather small sizes of sled they could carry not only massive, but also heavy items. For this the platform should be performed in the same plane with the front jumper — crosspiece. However, in the course of work I decided to install the yoke still slightly above the platform to serve as a front stop for the cargo boxes. And if you need to lower the bridge to the platform level the big work will not make. 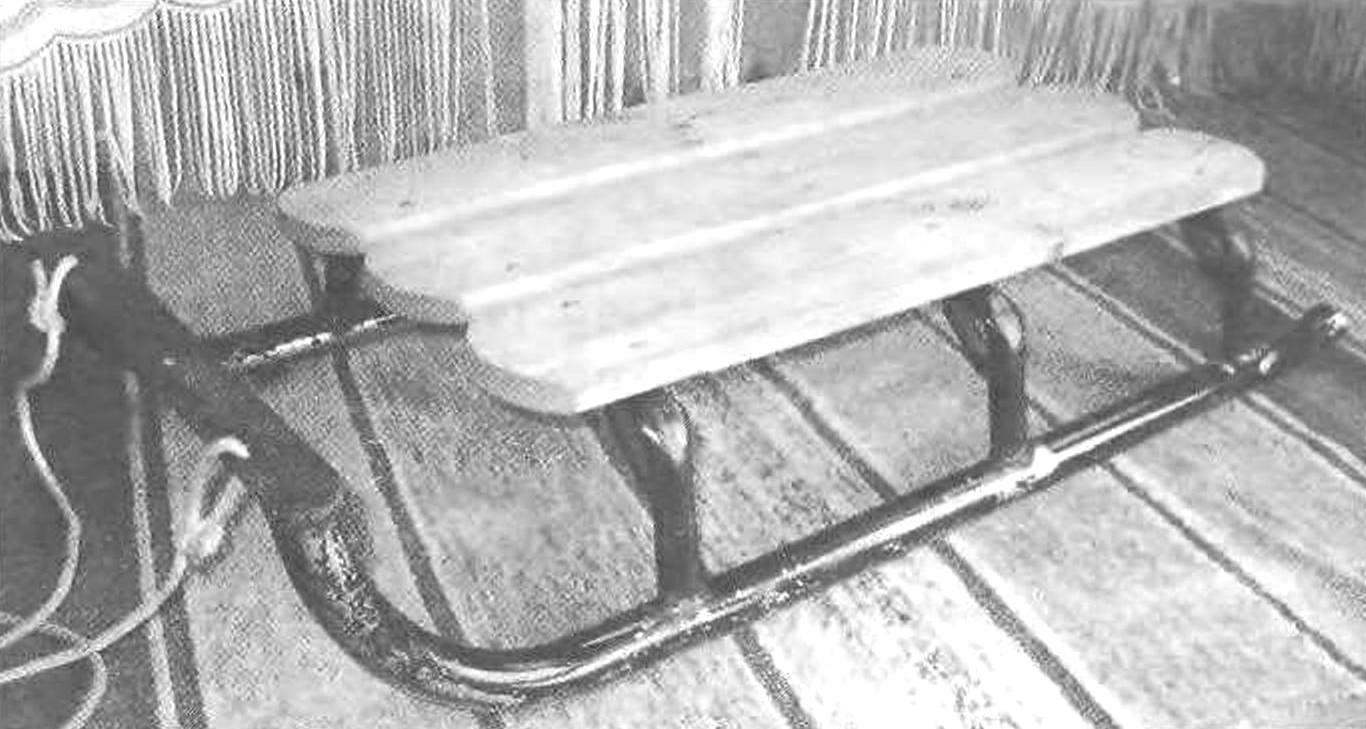 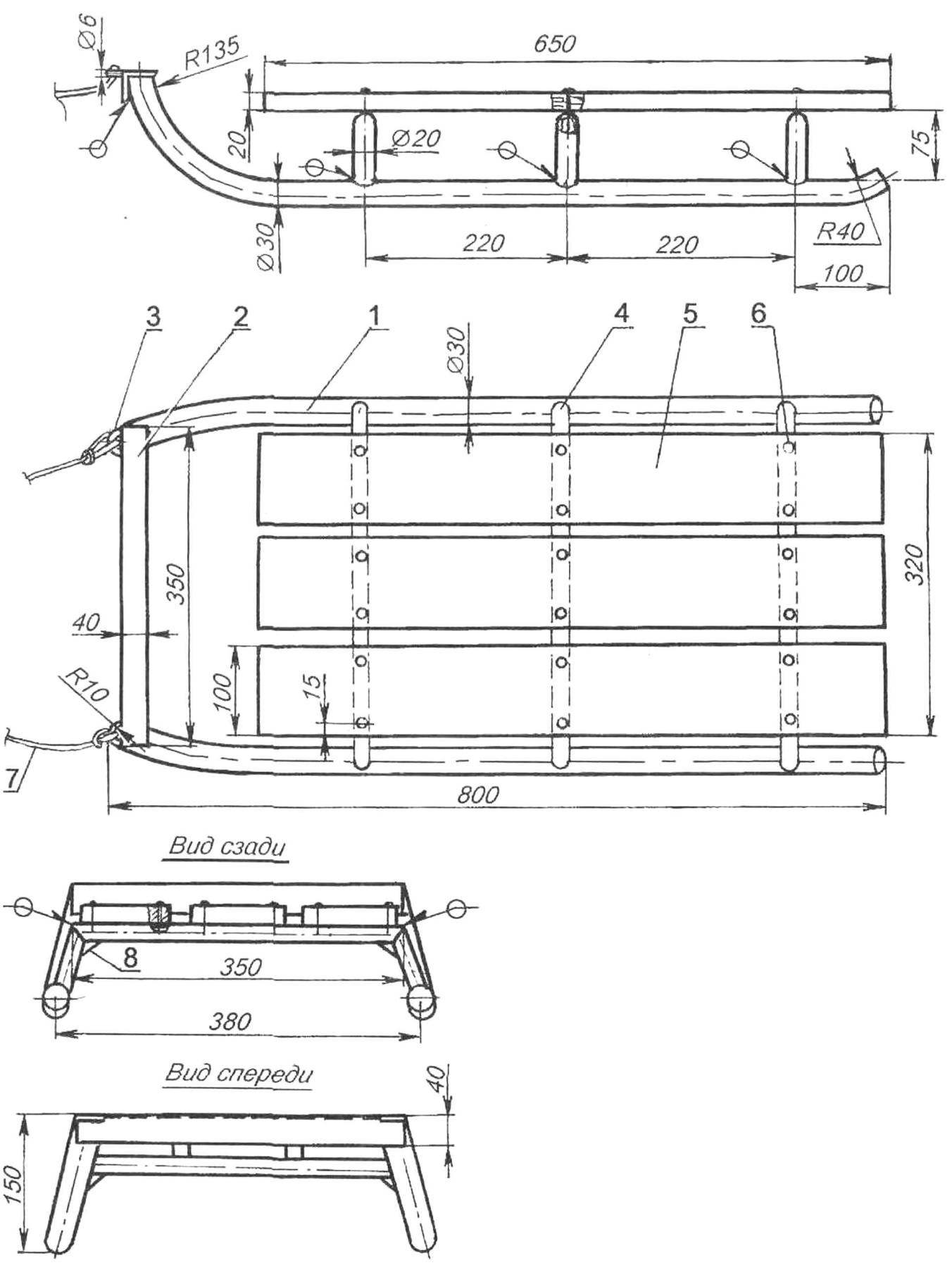 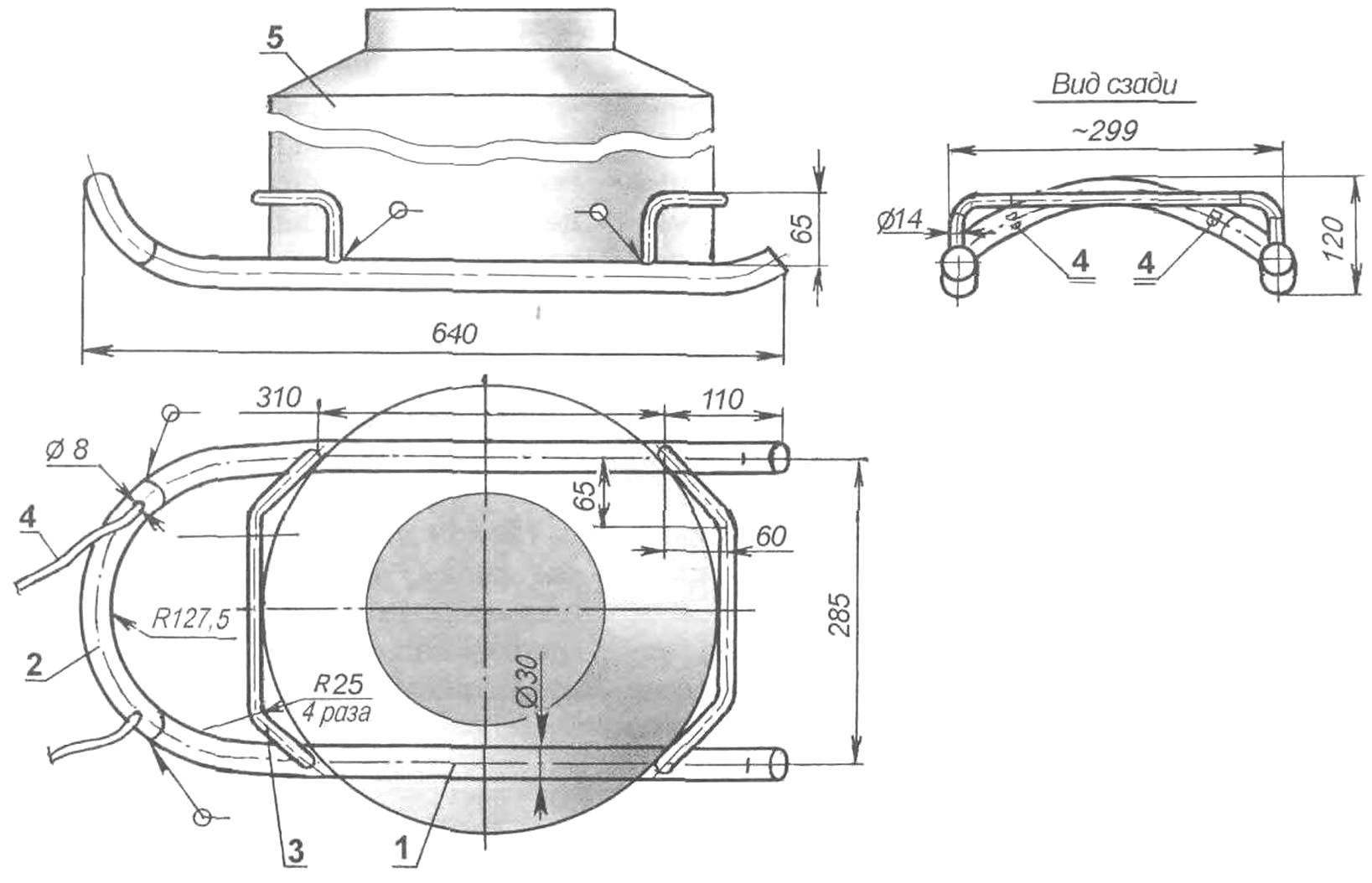 Second, the platform must be quite high to sled to carry overhanging loads. Thirdly, the platform is not desirable to make continuous and better fulfilling its lattice, to make it easier and safer to mount it on a cargo rope skipping not only the edges but in the middle. For transportation of the same cargo (snow, sand) will still have to use a box or drawer.
And the last one. The rear ends of the skids preferably also slightly bent — then, if necessary, will be easy to take the sled back.
Here, perhaps, and all the “little tricks” that I have tried to provide in the manufacture of a cargo sled. The process of their production, as they say —a trick. First prepared separate details: runners from the pipe with a diameter of 30 mm — from the metal beds, and reception portals of the 20 mm pipe. It is important that the rack was as similar as possible between themselves and runners — mirrored. Tube racks portals are bent in the vise, and therefore in places of bends they are a little flattened out and weakened. These places for reliability, it was necessary to strengthen the struts too from the pipe, but the smaller diameter is 14 mm. Although the variant represented in the drawing, it can be done and kerchiefs.
As for the Assembly process-welding, the first parts are only slightly picked up, and after careful alignment by setting the parallelism of the runners have provari the joints firmly.
The rear ends of the tubes of the runners made welded plugs, and the front ends of the leaf cross-traverse. Welds grind on the sandpaper, and finished with a file. In the traverse, near the ends of the runners drilled hole (drill pritupov their thicker edges) under the reins. The platform is made of three longitudinally extending wooden planks with cross-section 100×20 mm. Strap — pine, although it would be better to run them from non resinous wood. With racks it together with screws, screws through pre-drilled simultaneously in both parts corresponding holes.
Painted steel parts in the usual way: first cleaned from rust using wire brush and emery paper, then degreased with white spirit; and in the end was primed and painted with enamel NTS in two layers with intermediate drying.
It should be noted that the sled was good (Fig.1 and photo), although he made them, we can say, in haste.
The attentive reader will notice that the design of the sled in the drawing and the pictures there are small differences. For example, in the first case, the strut is welded, and the second curved; the drawing is a front jumper (cross member) from the area, and photos from a steel strip. This is done in order to show the ability of the variant of execution of certain parts.
Well, while doing these sleds, I realized that for the carriage of containers with water or other liquids, they are unsuitable, and this requires a different design. However, work was postponed until the following weekend, so without further ADO, at their own pleasure, surrender to the work of rusty metal. By the time the thought of another design of the water-cart and sled, measuring 40-liter aluminum flask, intended for use as container capacity, even put it in the sketch (Fig.2).
Next weekend, again enthusiastically took up the matter and by lunchtime production finished (except painting) is one of the slides — water related. In size they are less economic and simpler design. They have stands — they were replaced by the constraints from a thin pipe with a diameter of 14 mm. In principle, they do not even need and a Playground. The runners of these sleds made of steel pipes with outer diameter 30 mm, smoothly into the spreader bar welded between them from the same pipe, all three parts look like a single element.
Hand, as they say, already stuffed, and therefore cause controversy. But then came the relatives. They not only appreciated my work but asked to do the like.
Not to delay the case indefinitely, set about making the next sled. At the request of customers, they represented a symbiosis of the previous one: the size and design of the skid — like water-cart, and racks with a cargo platform — as economic. Here I note that just the day before purchased a device for exhaust studs. Here on these sleds and tested it by attaching the platform from 10 mm of plywood to the posts such rivets. 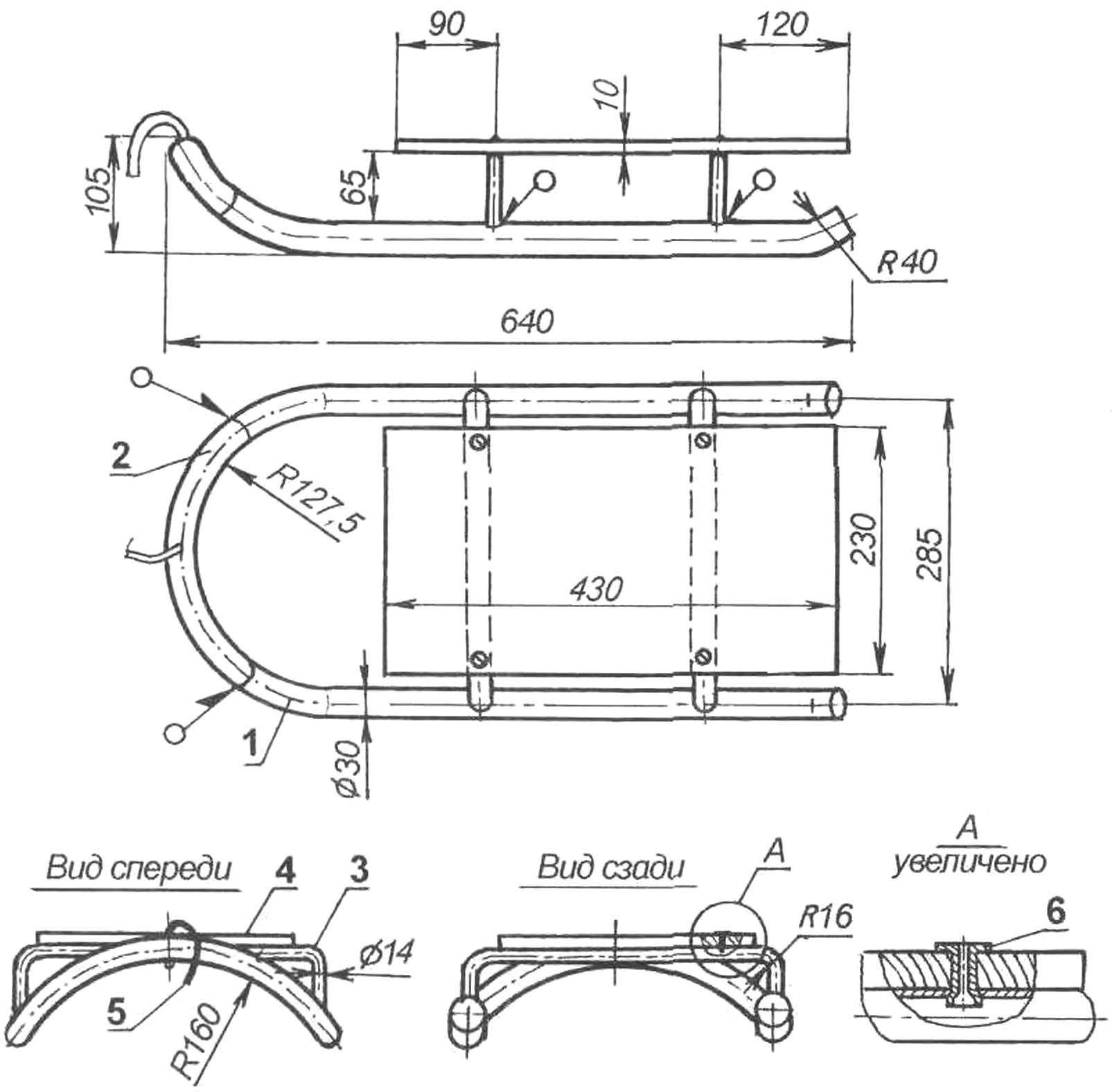 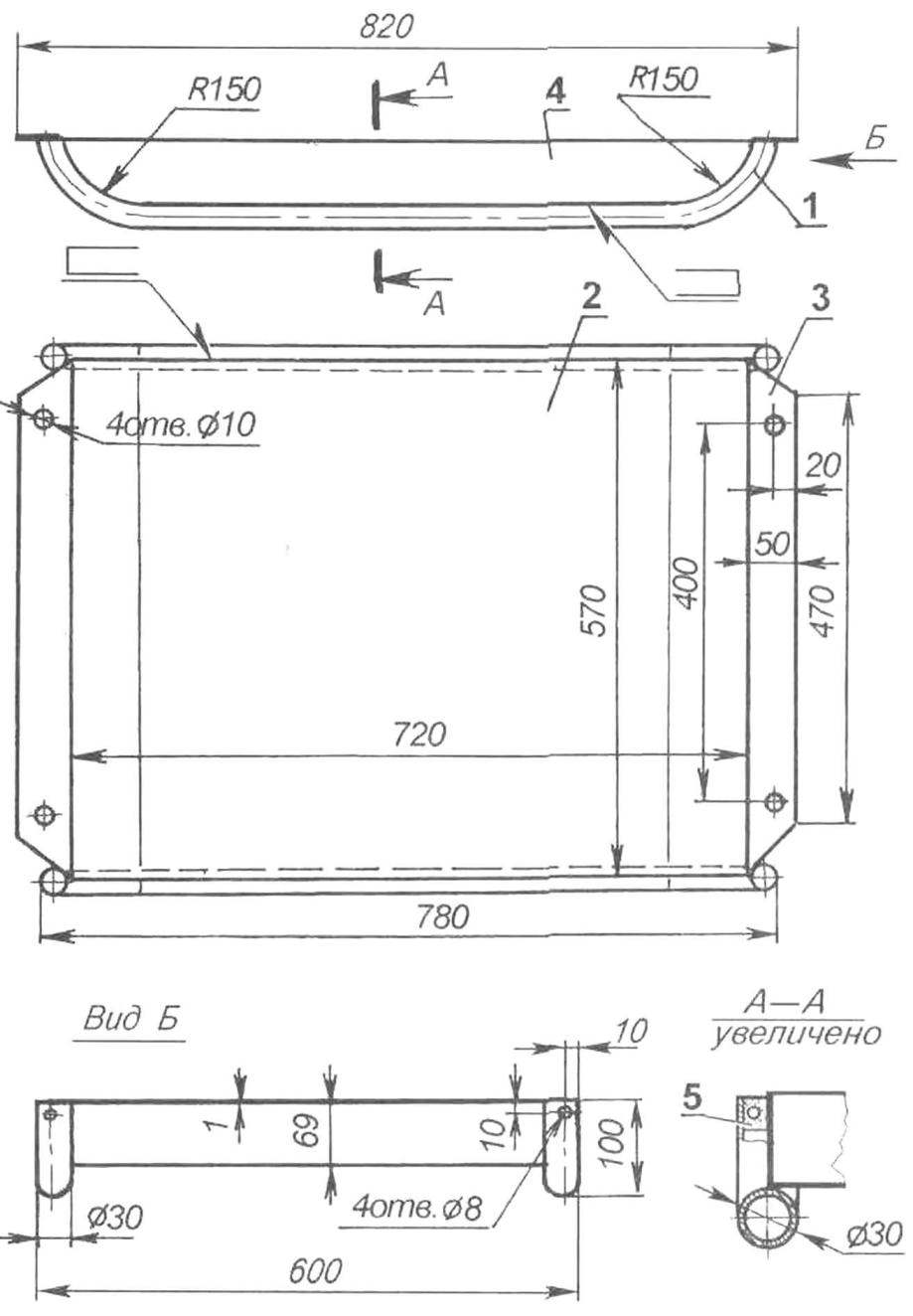 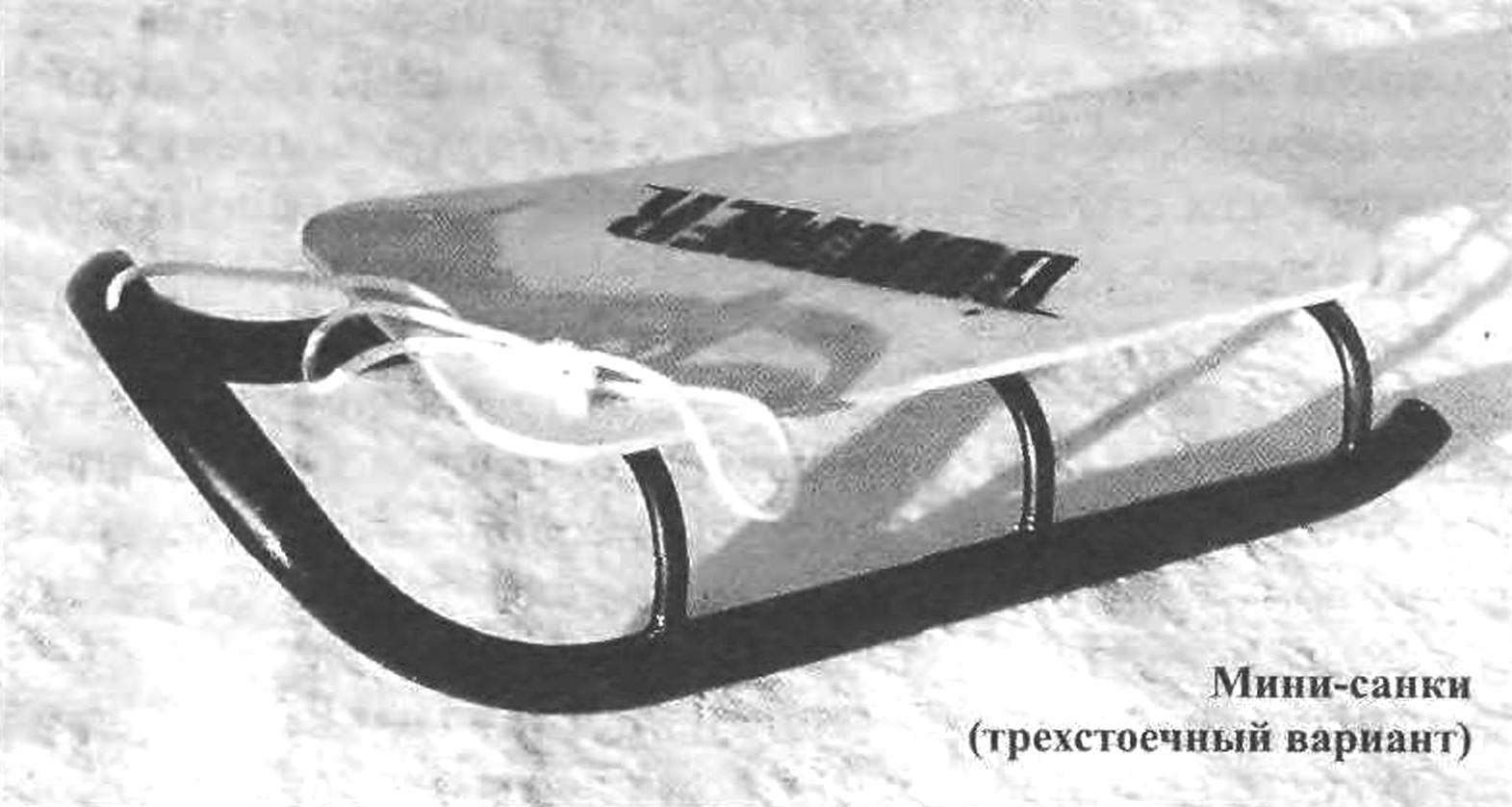 On made sled (Fig.3 in the photo) in the evening, guests and drove to his apartment a sack of potatoes and vegetables stored in our cellar. That’s just the paint on the sled has not had time to dry thoroughly.
And yet, no matter how good all the previous sleds, but they are suitable only for “sainokuni” or “ice” roads. For a snow virgin soil need other sled. We call them simply — a Leveller, but the North American Indians called them more loudly — the toboggan, and the name stuck for them as an international. Scraper has a different design. First, she doesn’t have skids, but because it is more like a trough. In this embodiment the scraper is unwieldy and its “puts” on each turn, especially at speed, when she, for example, hitched to a snowmobile. So my offroad skids also represent a symbiosis, but now of sleds and scrapers (Fig.4). The runners of the sleds, like toboggans, made of tubes of an external diameter of 30 mm and a truck chassis-trough — steel sheet with a thickness of 1 mm. At the sides of the trough has side and front and back yoke with openings for the passage of ropes securing the cargo. Traverses can be performed as flanging of bottoms, such as the folding of its edges doubled or even tripled. The runners are bent from both ends, that is, design is made on the principle of “push-pull”. The reins are fixed in the holes in the folded ends of the runners, and then the ends capped, wooden tubes, to the pipes did not get snow.
This scraper I made as a gift for his friend hunter as a trailer to the snowmobile. Not immediately photographed, and now this is not possible.
A. MATVEICHUK, Zavodoukovsk, Tyumen region.