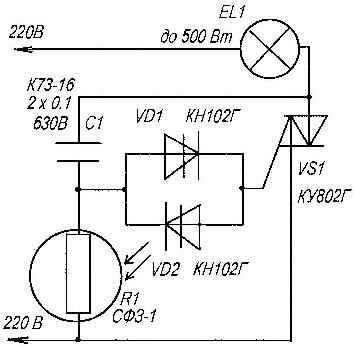 This device is designed to automatically turn on exterior lighting after dark, and, accordingly, the automatic switch-off at dawn, which is always important, especially in terms of country of residence in order to save energy resources.

The device is powered (Fig.1) in the following way. Put that photoresistor is not illuminated. Then its “dark” resistance is large, for example 50 — 100 ohms and the voltage from the middle point of the divider comprising the capacitor C1 exceeds the voltage of opening discs of the diode VD1 — VD2. The triac is open and the lamp burning. As the discs included counter-parallel, they operate in both half-cycle. The voltage at the control electrode of the triac comes with a divider, of course, when it’s off. After switching on of the triac, it remains in that state until the AC voltage falls to an extremely low level. Then the triac will turn off and the next half cycle the voltage will be in full to enroll in CR-divider. The voltage drop across the lamp will not have a significant impact on the operation of the divider. As the lamp is fairly inertial element, flashing her moments off of the triac completely invisible.

If the photoresistor is illuminated, its resistance is minimal (15— 100 Ohm). The voltage supplied to the discs, is not enough for their release. The triac is closed the lamp is off.

Instead of the capacitors C1 a device or two, you can put a resistor 30 to 36 kOhm 2 watt, but the capacitors, unlike resistors, are not heated, and it increases the reliability of the device. 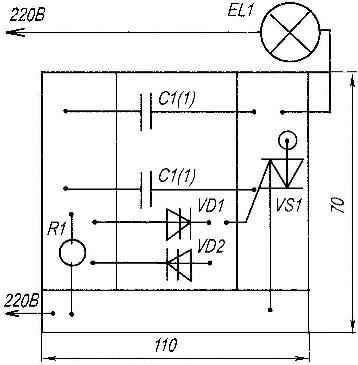 The scheme of this device is mounted on the Board of fiberglass (Fig.2) and placed on the radiator of the triac. The device is easy to install, plugging the gap in the supply circuit of the lamp. In this case, it is not necessary to remove the existing switch. Its presence facilitates the mounting of devices without disconnecting the voltage. Just click the switch and mount the photocell. The installation of the triac on the heatsink allows its isolation using the mica spacers. Head screw triac energized, is closed with a stopper from a bottle of mineral water and fixed with waterproof glue. The entire structure is placed in a plastic housing, which is fixed on the rod of the lamp. The “eye” of the photoresistor is directed away from a lamp-lit spots and is closed by a plate of Plexiglas to the case did not get precipitation. Board after installation, covered with purpose-lacquer. Power conductors made of sufficiently thick wire and inserted into a vinyl chloride tube.

The installation, which obviously should be done in daylight, so nobody got the idea to include exterior lighting. For the safety net should be put around the switch assistant or hang warning placard: do NOT INCLUDE job is ON the LINE!