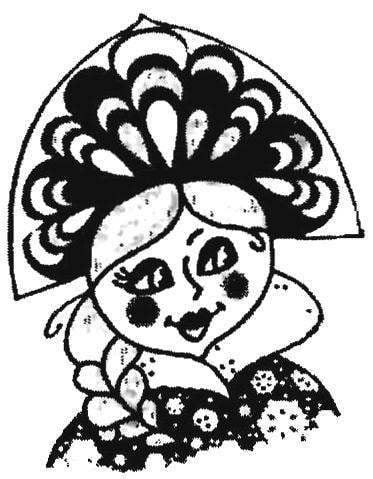 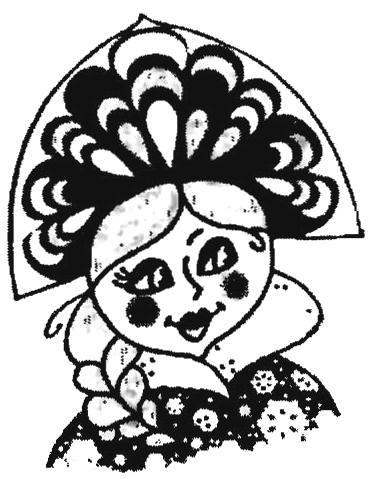 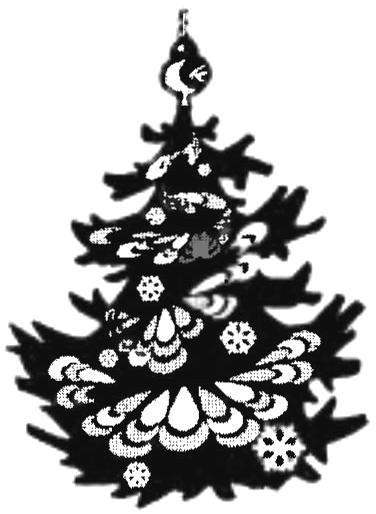 New year without snow Maiden — not a holiday. Precursor to new joys and happiness appears charming dadomo-pink granddaughter: as always, your wonderful sparkling outfit. And let it supplements this time a magical decoration in the form of stellate-iridescent headdress (Fig.1) or the headband with miracle gems (Fig.2)…
Unique and attractive play of light on the headdress of the snow Maiden will provide with an electronic switch. Precisely — which is especially popular among radio Amateurs three-phase multivibrator performed, for example, three transistors (Fig. 1 a) and powered by two connected in series “AA” cells of type 316 (the total voltage is 3 V, the average current given to the load, about 40 mA). Emitting elements are LEDs that are connected in groups to produce a light pattern with so-called effect of “running the iridescent fire.”
Capacitor C4 provides the multivibrator reliable starting. Resistor R4 plays the role of a ballast, limiting the current through the transistors with LEDs and protecting them from damage in the event of unusual situations.
Sources mysteriously shimmering light (LEDs) mounted on the headdress, the base of which is cut along the template from the cardboard of a thickness of 3 mm (Fig.1 b). Under these lovely mini lanterns in the workpiece drilled nine holes with a diameter of 5 mm, followed by the countersink from the back side to a diameter of 6 mm to a depth of 1— 1,5 mm, which provides maximum light emitters tight, secure fit.
Do not do without the four additional holes with a diameter of 3.2 mm for screws M3 for fixing the electronic component to a magic hat. From the front these holes reams up to 5.5 mm to a depth of 1-1,5 mm mounting nuts M3. From the back side of the headdress is painted by nitroenamel, and on the front glued with colored foil with contrasting “feather” ornament and dramatic lacing. 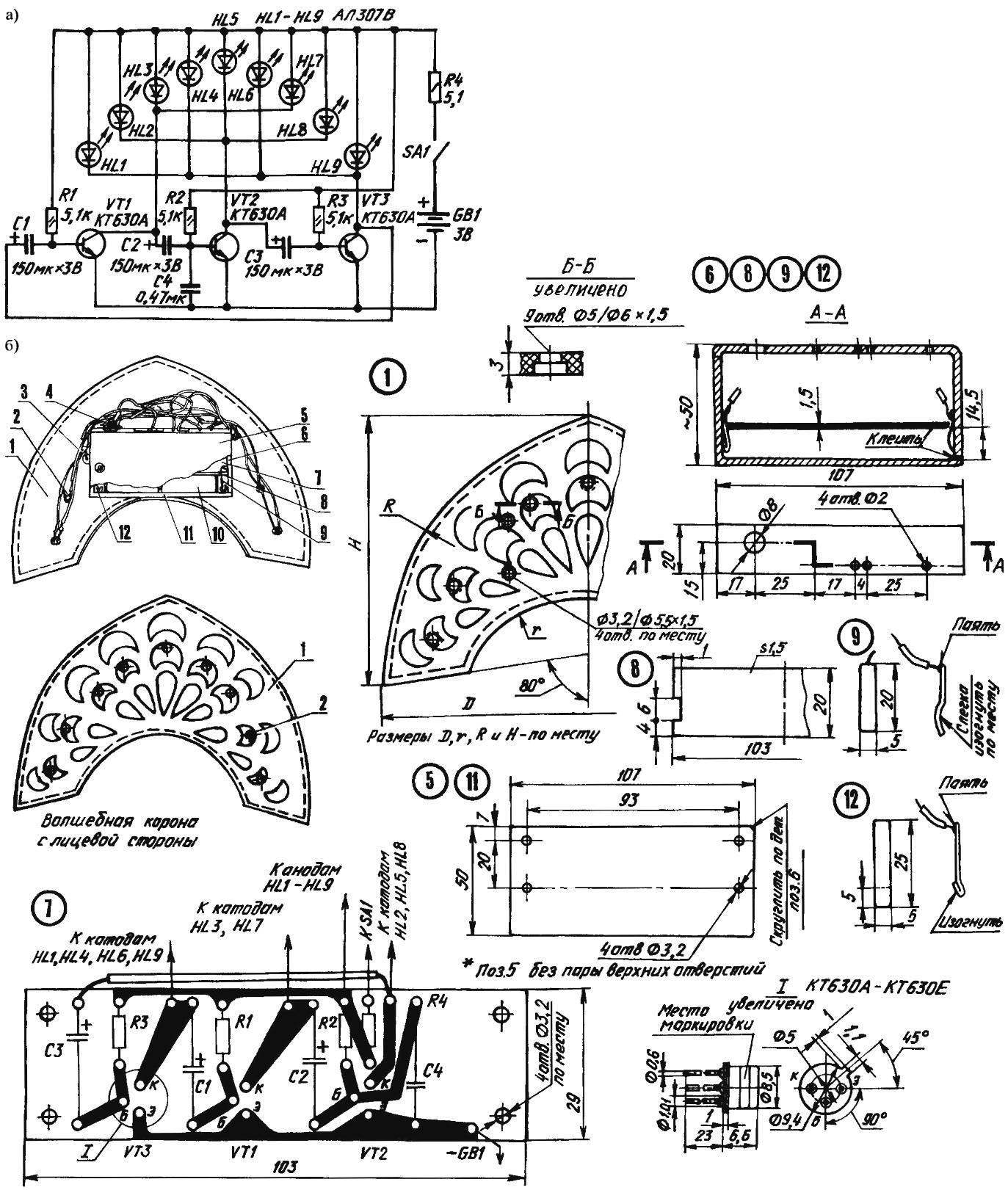 Fig. 1. A circuit diagram of a three-phase multivibrator with LEDs (a) and its embodiment in the magical ornaments of the snow Maiden (b):
1 — the base of the headdress (a sheet of cardboard, s3, the front side covered with foil with contrasting “feather” ornament and colorful lace-up); 2 — led АЛ307В (9 pieces); 3 — mounting wire mgshv-0,5; 4 — microtubles MT1; 5,6,11, respectively, a lid sidewall and the front wall of the casing (plexiglass, sheet 52); 7— 1.5 mm glinkova Board with mounted on it by the multivibrator; In the partition (the PCB or Micarta, s1,5); 9,12, respectively, above zero and negative sprung contacts (tinplate, s0,3); 10 — cells 316 Uranium M; small items of fasteners conventionally not shown
The electrical connection of the electrical circuit used textolite or glinkova Board size 103x29x1,5 mm, which, together with the power source and the switch SA1 is placed on the back side of the magic headdress in makeshift housing made of sheet of Plexiglas with a thickness of 2 mm. Internal dimensions 103x45x20 mm (Fig. 16).
The sidewall of the housing may be made of strips of plexiglass 300x20x2 mm. Required bends at a 90° angle are easily derived using the chip of an old saw blade, heated on the gas stove and applied by bezzubova edge to the workpiece in each of the intended corners. Once the plexiglass is starting in the right place to soften, billet Flex smoothly, achieving (sometimes two or three) to obtain the desired Squareness of the future box. In the fourth corner with a file or hacksaw, remove the excess starting material (if any), and the abutting edges are glued together 5-percent solution of Plexiglas in dichloroethane or in an extreme case, “Moment-1”.
Both walls are also made, as previously stated, made of Plexiglas, and the front is held together with sidewalls, and by a headdress with glue (e.g., “Point-1”), In the upper part of the body drilled the four holes of 2 mm diameter to pass wires leading to the LEDs, and one 8mm under the head of the switch SA1.
The circuit Board is separated from the compartment with batteries or textolite glinkovo partition sizes 103x20x1,5 mm provided with grooves through which springy contacts from the so-called white tin (e.g., tin).
The baffle is installed in the housing with glue, the contacts are passed into the grooves and glued to the walls of the housing. The LEDs are inserted (in those holes) from the backside of the headdress. Insights down, followed by podpici segments mounting flexible wire mgshv-0,5 according to the circuit diagram.
In addition to transistors of the type specified in the diagram can be КТ630А — КТ630Е (foreign counterparts ВР258) and series КТ603, КТ604 with any alphabetic index or similar semiconductor medium power triode, designed to operate with a maximum DC collector not less than 40 mA. As resistors R1 — R3 are used widespread MLT-0,125.
Chetvertfinalny R4 can be composed of two parallel connected resistors MLT with a power dissipation of 0.125 W and a resistance of 10 Ohms each. It is not excluded that during configuration, you have even reduce some of the above denomination is provided that properly collected scheme does not start (fire at once, all the LEDs) and the batteries fresh.
Capacitors C1 — C3 are recommended from among the relatively cheap and widespread (for example, from a number K52-1), but it is quite possible the replacement of the K50-35, K50-6, or other small-sized electrolytic. The capacity of each may be in the range of 100 — 200 UF. Prerequisite — to have all three she was the same rank that is achieved by the selection, for example, by the method described in No. 11’2002 of the magazine “modelist-Konstruktor”.
As C4 is desirable to use K73-17, although acceptable K70, MBM or even more bulky capacitors. However, such a change may require adjustments in the location of some of the electronic components on the circuit Board.
LEDs — АЛ307В (green). They can be other types (preferably with the same electrical parameters). Switch SA1 will truly microtuble the MT1.
Board with mounted thereon the electronic components is attached to the head ornament М2х12 screws threaded through the hole in the hull of the multivibrator, and is fixed inside the housing by insulating bushings (illustrations not shown) and outside nuts, which have side contact with the headdress smeared up the above-mentioned “Moment-1”. Stick also nuts, designed for M2 screws, securing the rear wall.
Outside kokoshnik paste foil, the edges of which are bent from the back side with further decorative lacing. When performing these operations, the LEDs removed from the socket — countersunk holes. Then on the front side of the headdress glued decorative elements (the color gamut) with holes for “their” LEDs.
Sidewalls of the LEDs at the base of the lubricated with glue, after the source star iridescent magical radiation are inserted in their sockets. E-the decoration is ready. It is recommended that the LEDs additionally to plaster the back side of the insulating material, for example, film from the flower bouquets.
In a magical headdress of Maiden, instead of the above transistors can be used and a semiconductor triode p-n-p structure (e.g., МП25). In this case, you should reverse the polarity of the LEDs, electrolytic capacitors and power source. 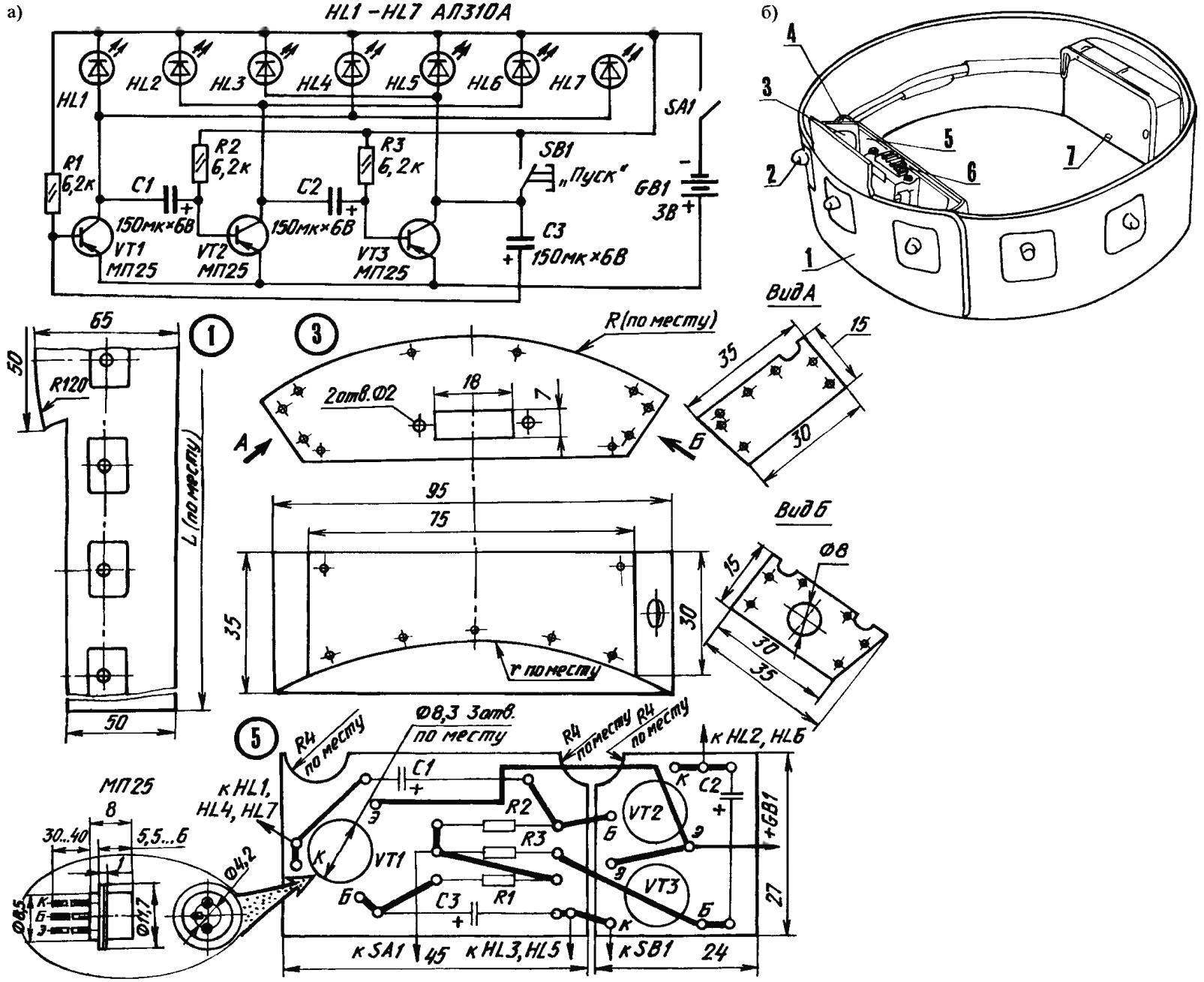 Fig. 2. A modified circuit design of the multivibrator (a) and the option of using it in a headband for the snow Maiden (b):
1 — the base of the headband with comb-like protrusion in the center (1.5 mm celluloid covered with foil with the “miracle gems magic cut” — contrasting elements in the form of invoices rectangles with rounded corners); 2 — led 310A or any foreign counterpart bright enough radiation (7 PCs); 3 — the case of the multivibrator with the curved front and bottom walls (2 mm Plexiglas or polystyrene); 4 — the “start” button, type -1 KM; 5 — joined from two pieces of 1.5-mm glinkova Board with mounted on it by the multivibrator; 6 — switch PDM; 7 — Bay power supply two galvanic cells 316 “Uranium M”
Definition of multivibrator — electronic switch can be increased if instead of the capacitor C4 to set the “start” button. This circuit design was implemented by the author of the first based on imported LEDs, providing a significant light power, but consume slightly more current than the indicator series АЛ307; subsequently they were replaced (Fig.2A) 7 domestic АЛ310А with simultaneous rejection of the old current limiter R4. Had a decent device in which power supply is used SA1 (slide switch VSD-1), and to run three-phase multivibrator — briefly pressing the SB1 button (the button KM1-1). Consumption current is about 40 mA.
One of the possible applications of such a device may be, for example, magic headband snow Maiden. Compartment to accommodate two battery cells power supply 316 “Uranium M” and diametrically located from his body, which is a diagram, glued together from plastic sheeting repeatedly mentioned “Moment-1”. The base of the headband with comb-like protrusion in the center of the 1.5-mm celluloid covered with foil with the “miracle gems magic-cut,” the contrasting elements in the form of overhead 20×20 mm rectangles with rounded corners.
Any of the above variants of the three-phase generator with LEDs can be embedded with no less impact, and in other ornaments, the snow Maiden (for example, in the miracle belt or embroidered with unique patterns magic boots). However, it will have to show patience, and imagination…
A. BRANITSKY, Minsk, Belarus