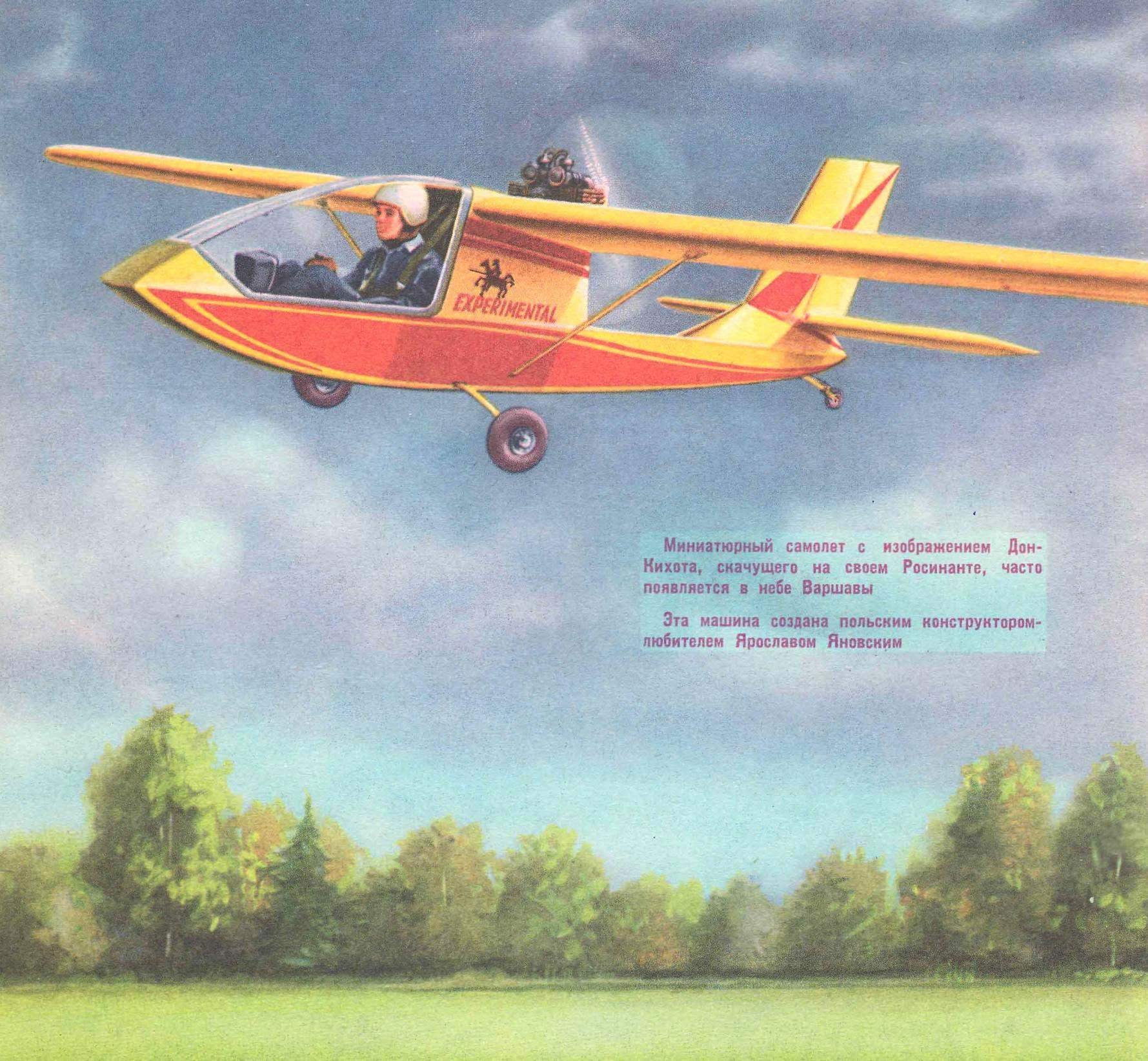 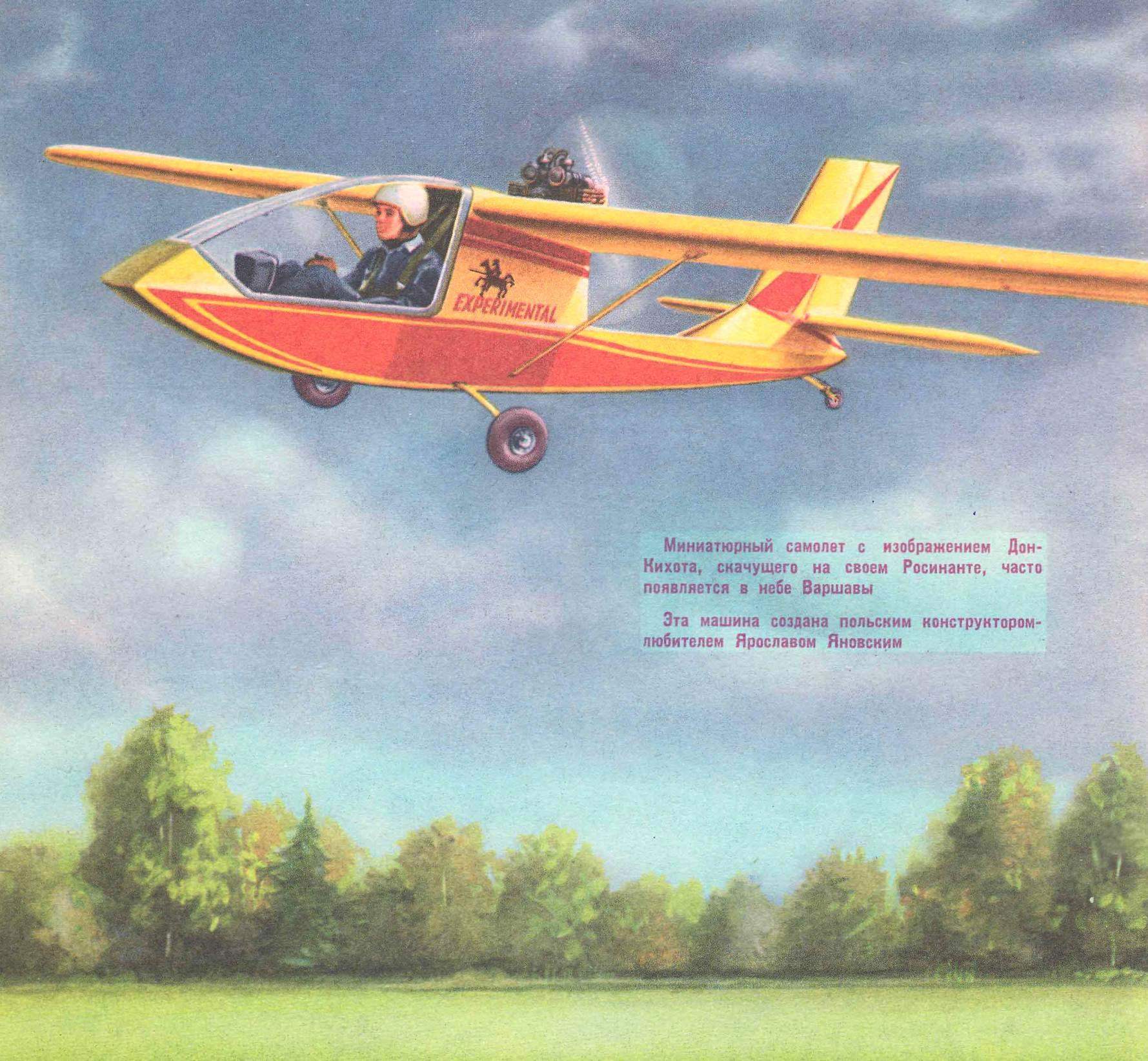 Amateur microelectroni becomes more and more tangible scale. We can safely say that the passions of individuals it has become a new and, moreover, a massive kind of scientific and technical creativity, mobilizing the hidden potential of people, as well as possible contributing to the wide dissemination of aviation knowledge among young people and training for one of the most complex industries — aviation.
Success enthusiasts microelectrode amazing. Having most of very modest material and manufacturing capabilities, they have created a number of original designs of aircraft, which can be a decoration of any aviation Museum.
Fewer and fewer people who consider Amateur microelectroni just fun, one of countless Hobbies of modern man, and are receiving more this kind of technical creativity the most serious attention. Now there is no doubt that the work of Amateurs contribute to the development of aviation science and technology in General. In a number of countries to meet the needs of lovers microelectroni beginning to work the “big” aviation industry, producing parts, assemblies and even complete kits for construction of model microplane, microventilation, paragliders and balloons; on the other hand, many Amateur designers have created flying machines, which found application not only in sports and the national economy, but also attracted the attention of specialists. So, microalloy American designer-Amateur Igor Bensen received wide recognition from aviation athletes. Like machines created by the Soviet aviapersonal, repeatedly can be seen on the stands of the USSR. They have a very simple construction, cheap to manufacture and simple in piloting.
In recent years, particular attention was drawn to five microplane Amateur-built: “WASP”, the designers Lewin K. and V. Korablev (USSR); “don Quixote,” designer J. Janowski (Poland); “Aerokar” designer V. Chivers (USA); “KRI-KRI”, the designer M. Colomban (France); “Trouble,” the designer D. Trouble (USA) (see Fig.). About the aircraft “WASP” our magazine has already told readers (see # 8 in 1970). Now you can add that “WASP” has stood the test of time and is well proven in operation. Designers upgraded the machine, with “OSU” modern tricycle landing gear with nose wheel and significantly improving its aerodynamics. The activities of a group of enthusiasts headed by K. Laviny and K. Korablev, deserves support and can serve as a model for the organization of these groups. 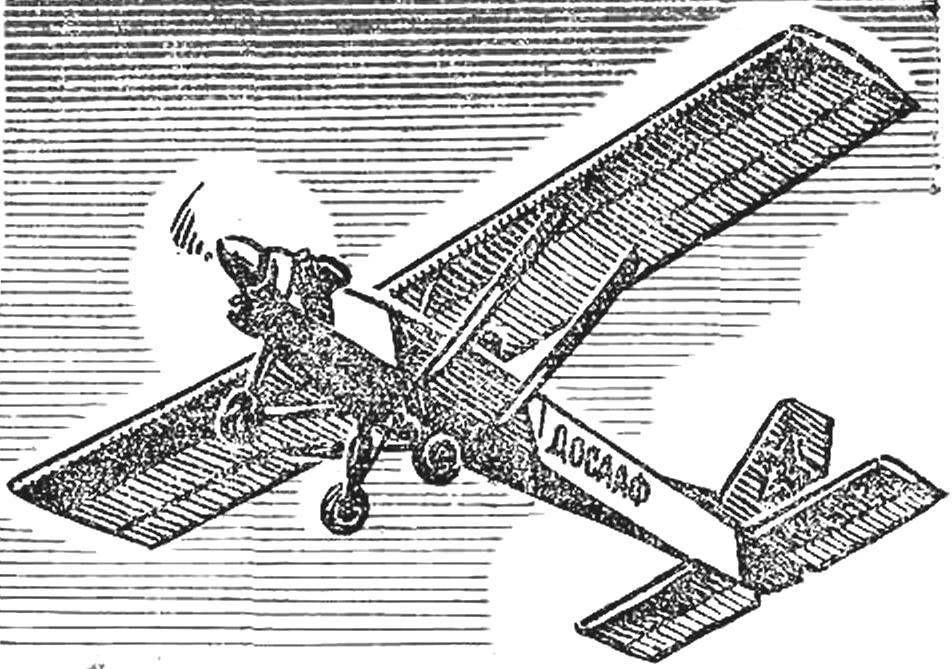 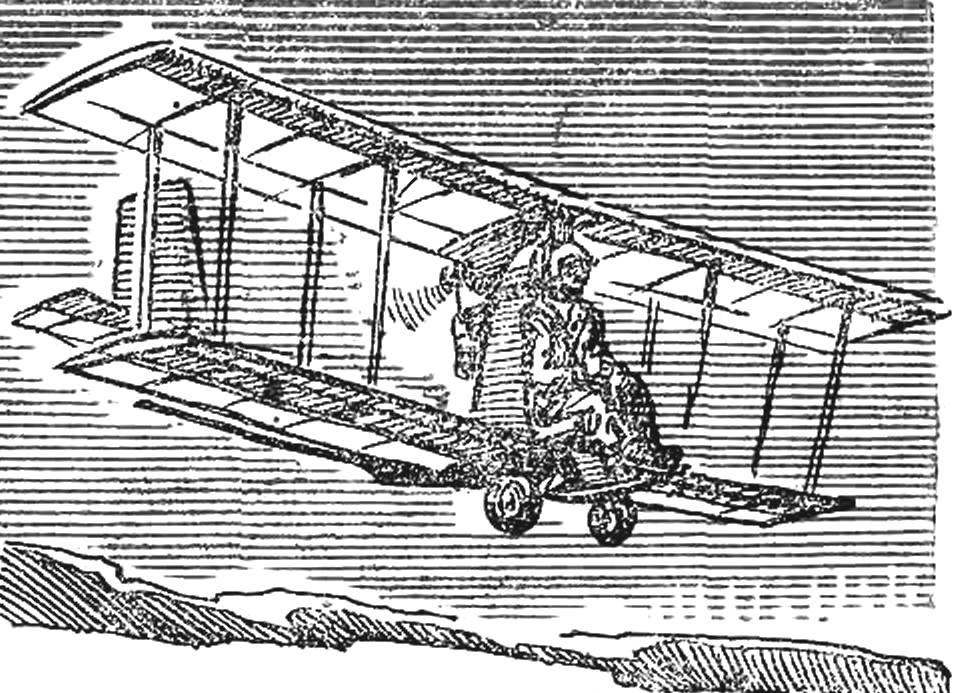 “AEROKART” — ultralight biplane American engineer V. Cisrs. Reminiscent of an old aircraft, but has good flight characteristics and is suitable for initial training. 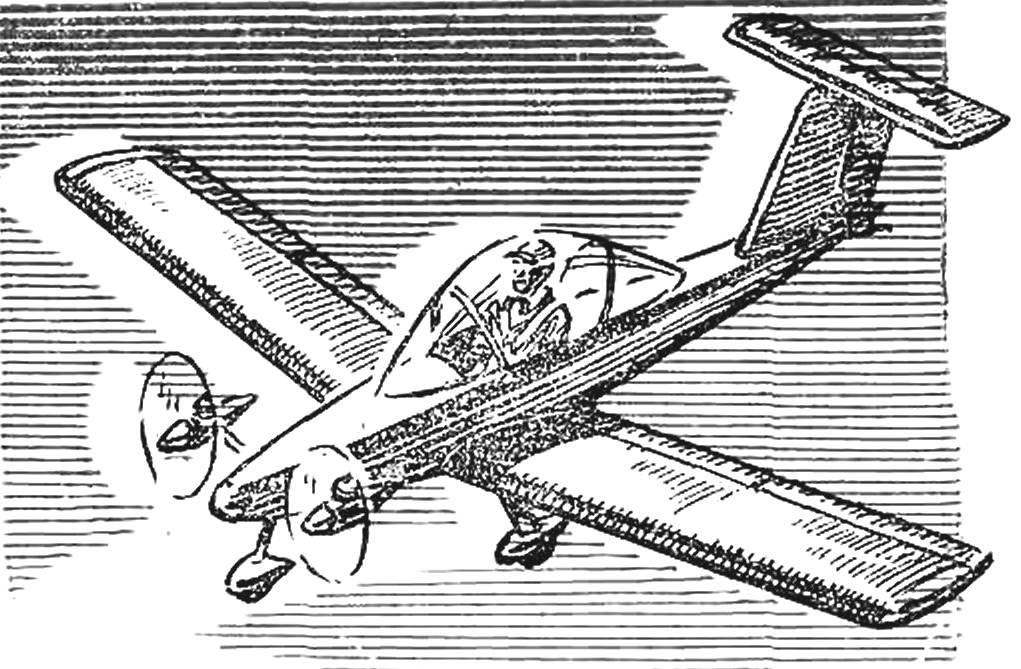 “CREE-CREE” — the world’s smallest twin-engine aircraft of the French designer, lover of Michel Colomban. Weighs only 65 kg thanks to the use of synthetic materials. 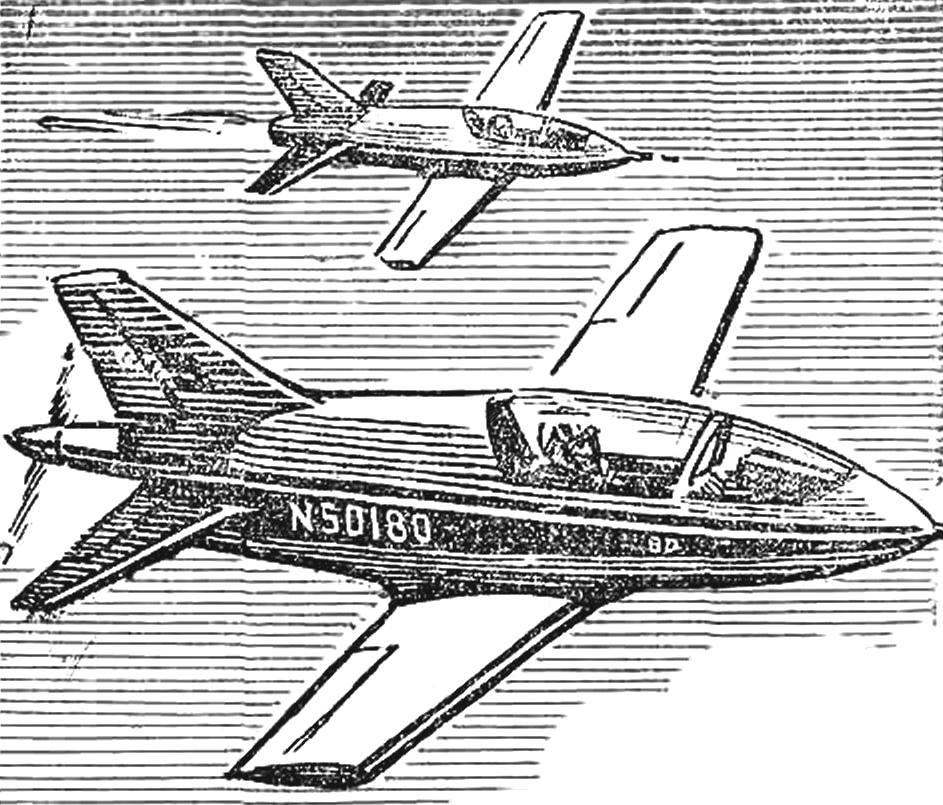 “BD” (“Trouble”) — the plane James Trouble (USA), dubbed “winged bullet” speeds in a piston version 285 km/h, reactive — 450 km/h.
About microplane “Aerokar”, “Trouble” and “Cree-Cree” we shall have occasion to bogosort. And today will talk about “don Quixote” Yanovsky, as have quite a lot of information about this interesting plane and its Creator. Like many other talented aircraft designers, Yanovsky in the recent past, the Antonov an. It is on the model it has implemented and worked through their ideas before one on the runway of the Warsaw flying club there was a small, quite unusual shape of the airplane, very similar to the large model (Fig. 2).
Essentially, it was just a great model, but it is able to levitate people. From the first to the last screw Yaroslav and his faithful companions joiner Witold Kalita, mechanics Zdzislaw Rabiega and Stefan Polewski made it with their hands. “It seems that only the gear wheels I got ready, — said the designer — and that is to reduce the weight of the tires on a lathe were removed and half of the thickness of the protector!” The thoughtful design, high culture weight provided a “don Quixote” very good flight data. 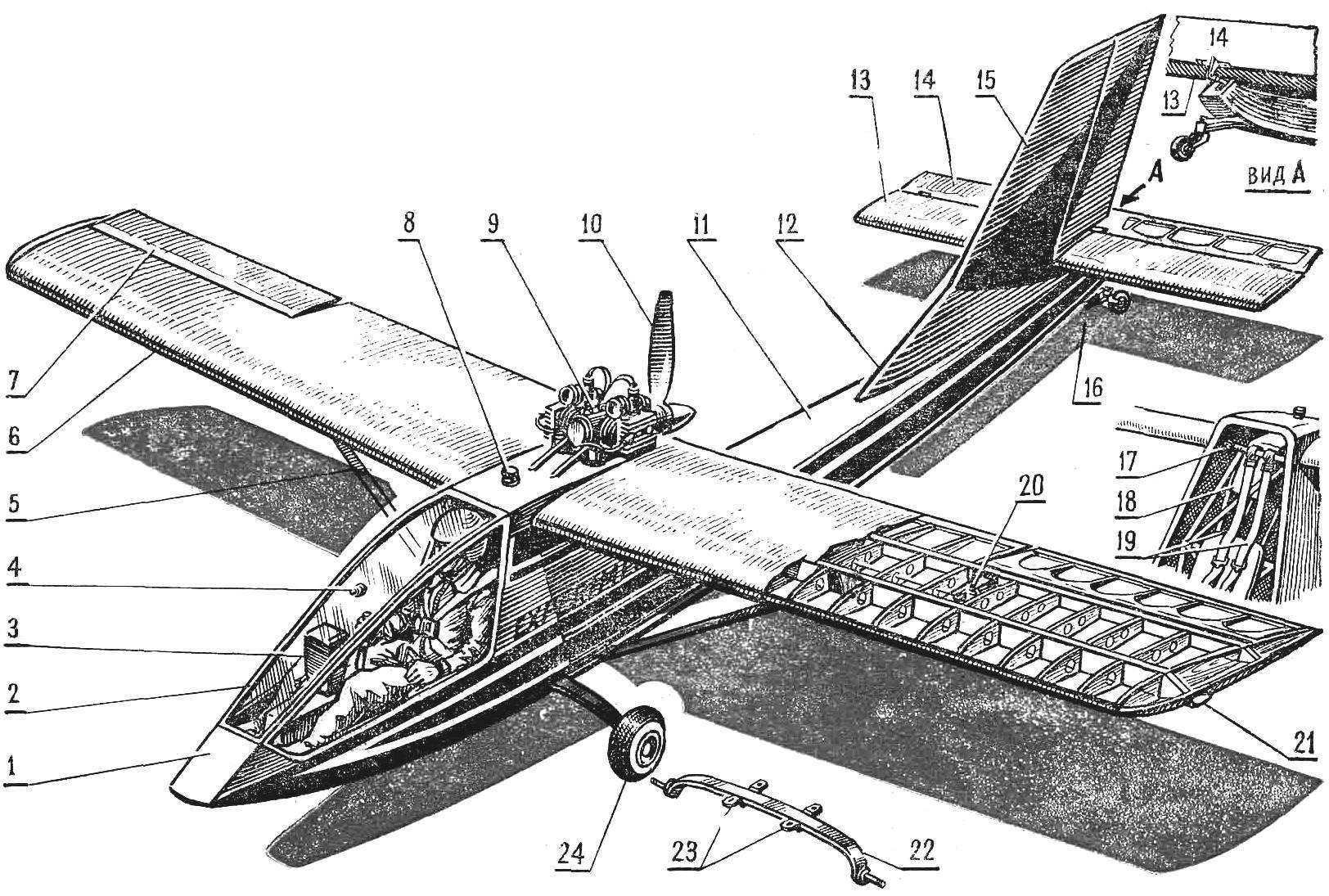 Fig. 2. “Don Quixote”, 3/4 front view:
1 — fuselage 2 — removable pilot lamp, 3 — instrument cluster 4 — compass, 5 — strut wing, 6 right wing console, 7 — right Aileron, 8 — neck of the fuel tank 9 — engine 10 — propeller 11 — fuselage fairing, 12 — dorsal fin, 13 — stabilizer, 14 — wheel height, 15 — Kiel, 16 — tail wheel, 17 — power frame hromansilevyh pipes, 18 — fuel tank, 19 — seatbelts, 20 — rocking Aileron, 21 — wing fire (ANO), 22 — spring chassis, the 23 — bracket-spring, 24 — wheel chassis.
The design of the aircraft “don Quixote” — combined with the use of modern synthetic materials (foam, fiberglass, epoxy glues and paints). The architecture of the very modern aircraft, it used a large number of flat panels, which significantly simplify the construction without impairing at the same time, aerodynamics.
The FUSELAGE. The main power element is a bearing frame, welded from steel hromansilevyh pipes which are attached to the wings, motor, fuel tank, tail unit, undercarriage and sides of the fuselage. In the front part of the fuselage cockpit, lockable removable lantern is made of Plexiglas with a thickness of 2 mm. the frame of the lantern of pine sticks, which the plexiglass is attached by wood screws with countersunk heads. The inside and outside faces of the detachable parts of the lamp are covered with a textile tape. The rear part is joined with a contoured frame of the fuselage by four steel pins, and the front fastens can be opened from inside the castle. Arm last used for emergency release of a lantern in flight. The design of the fuselage is made so that during Assembly and disassembly of the aircraft required fewer Assembly operations and special tools.
The forward lower fuselage from the nose to the base frame sheathed with plywood with a thickness of 2 mm, from the frame to tail — plywood 1.5 mm. Side — frames, collected from the pine sticks and with both sides sheathed with plywood 1.5 mm thick. the Inner space of the frames are filled with foam PS-1. Main landing gear — two-wheel, made from a single strip of spring steel with a thickness of 10 mm, which is attached to the base frame with four bolts Ø 10 mm. At the ends are mounted forged steel shoes with the axes. The wheels of the main gear air size 300X125 mounted on lightweight hubs. The tail wheel Ø 120 mm and a width of 30 mm made of solid rubber. It is mounted on a thin leaf spring and is provided with a mechanism for latching fork wheel before takeoff. 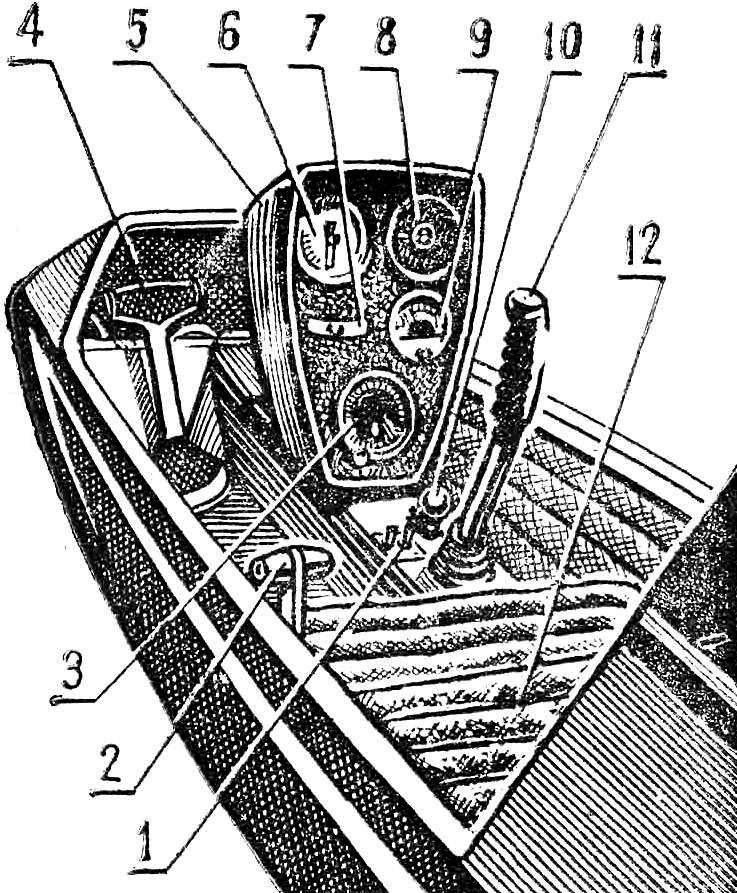 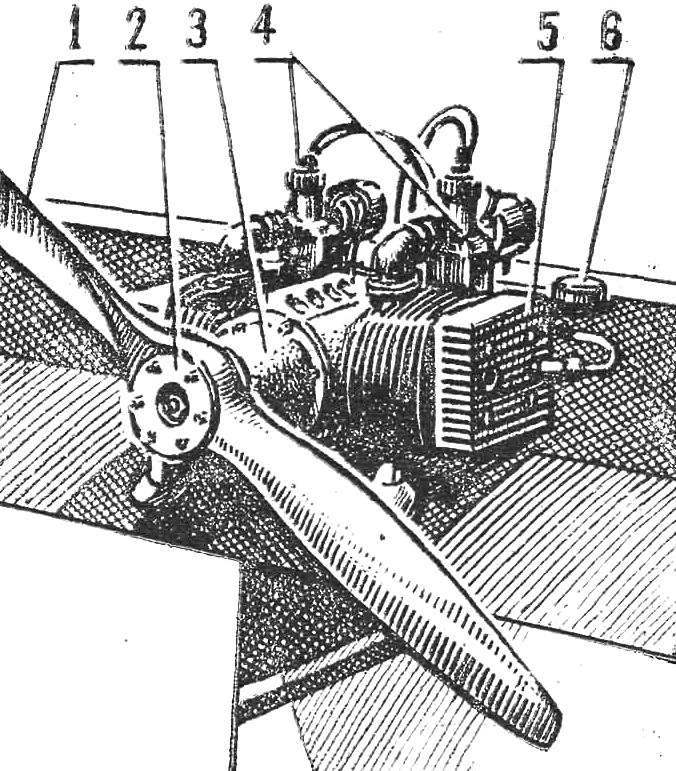 Fig. 4. Motor, 3/4 rear view in:
1 — propeller, 2 — propeller hub 3 — Carter, 4 carburetors, 5 — cylinder, 6 — neck of the fuel tank.
To reduce the midsection, and consequently the drag of the car, the cabin is “don Quixote” is designed for polulezhachee position of the pilot and is equipped with all necessary appliances, placed on the so-called functional scheme: there is no traditional dashboard cluttering the entire front part of the cabin. The devices are mounted in a small block, located in the middle part, between the pilot’s knees. A compass hanging on the front of the removable canopy. As shown, this arrangement of devices creates great convenience when driving, because it does not narrow the review and does not tire the pilot. Seatbelts — lap and shoulder — mounted to the support frame and closes splintage lock lightweight.
MANAGEMENT of traditional light aircraft: a handle on the elevators and ailerons, and pedals on the rudder. Combined control wiring from the steering shaft on a rocking chair in the center section with rigid rods inside the wing to the Aileron — cable, from the pedals to the steering wheel direction cable also. From Gaza to throttle valves of the carburetors and air corrector — cables in flexible casings.
The WING is of wooden construction, two-spar, has a profile Clark Y 13% across the span. The main spar height of 130 mm made of pine strips covered with plywood 2 mm, with reinforcements in the areas of installation of seal assemblies and mounting struts. Auxiliary spar to which are hung the ailerons, designed similarly to the main. In the joints of the spars with ribs glued pine struts to ensure rigidity of the whole structure. Ribs wing — the same, with a frame of pine slats 5X7 mm, covered with one side plywood with a thickness of 1 mm; the root rib reinforced plates made of plywood 4 mm thick end is made in the form of circle contour with a rim of pine strips 10 X 10 mm and foam-filled PS-1. The front part of the wing to the main spar covered with plywood with a thickness of 1 mm forming a caisson that works well for torsion. Caisson covered with thin fiberglass on epoxy glue, the rest of the wing and ailerons covered with madapollam. Aileron suspended from the wing at two points, of which the closest to the fuselage is a pylon connected to the thrust control. 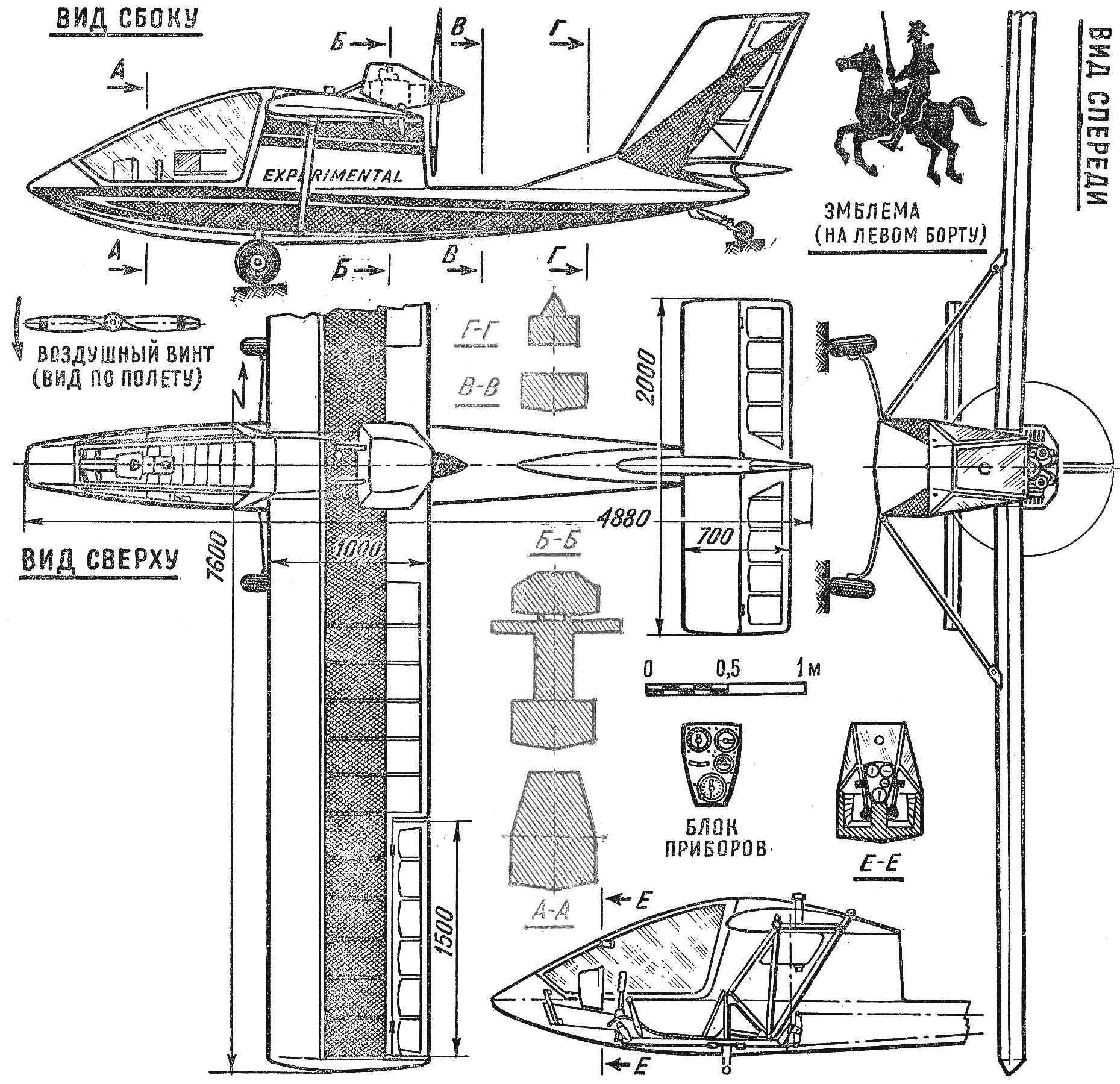 Fig. 5. Scheme microplane “don Quixote” in three projections.
The tail has a simplified silhouette with straight edges. Design — wood, with the siding of the keel and stabilizer plywood with a thickness of 1 mm; the steering wheel turns and elevators covered with madapollam. The Elevator is suspended from the stabilizer at three points, of which the middle is the wild boar. The rudder is in two points, the lower of them is connected with the control cables.
ENGINE — two-stroke two-cylinder “boxer” (with cylinders at 180°) is assembled from two sets of motorcycle cylinders, pistons, and connecting rods. Carter, crankshaft and cylinder head’s homemade. To improve the filling of the working mixture each cylinder has its own carburettor with a falling stream (Fig. 4). Ignition system two coils of high voltage. Engine capacity — 500 cm3, power — 25 HP Propeller two-bladed, Ø 1,06 m. Made from ash gorse (splice) and covered with glass fiber epoxy resin.
On “don Quixote” made a lot of successful flights that have confirmed the correctness and functionality of the design intent. It is interesting to note that this machine is popular not only in Poland; several copies of “don Quixote” to the drawings of the author is constructed by fans in the Soviet Union, England and Canada.