When lighting and electricity were cheap, the question of cost-conscious approach when choosing lighting stairwells seriously anyone is not intended. But life has taught everyone to count every penny, so convinced of the feasibility of using the machine include a ladder and corridor lighting (ALLCO) there is no need. The question is: which of the many existing developments to choose?
The most promising, in my opinion, the simple (and not crammed with transistors, optocouplers and chips) ALCO, designed for operation in conditions of significant fluctuations of temperature and humidity. The proposed electrical schematic of such a machine is available even to a beginner, as it contains a small number of electronic components and does not require special skills in debugging.
The sensitive element in this scheme is not scarce photoresistor VR1 type СФ2-5. Together with the resistors R1 and R3, it creates a voltage divider, to which through a resistor R2 and Zener diode VD2 connected to the control electrode of the thyristor VS1 type КУ201 K.
While the photoresistor is illuminated, its resistance is much less than the total resistance of the resistors R1 and R3. Hence, the voltage on capacitor C1 is insufficient to breakdown the Zener diode VD2. The thyristor VS1 is locked and controlled by automatic lamp EL1 repaid.
When the illumination of the photoresistor decreases, its resistance will increase dramatically and become comparable with the resistance of the resistors R1 and R3. The potential on the top (pattern) side of the capacitor C1 at the beginning of each half cycle of the Iset, is applied to the bridge rectifier, will begin to increase to the point of punching VD2. The Zener diode will open circuit the control electrode will flow the discharge current of the capacitor C1, unlocked the thyristor VS1. The machine will transition to the on state, which will be up until dark photoresistor VR1. 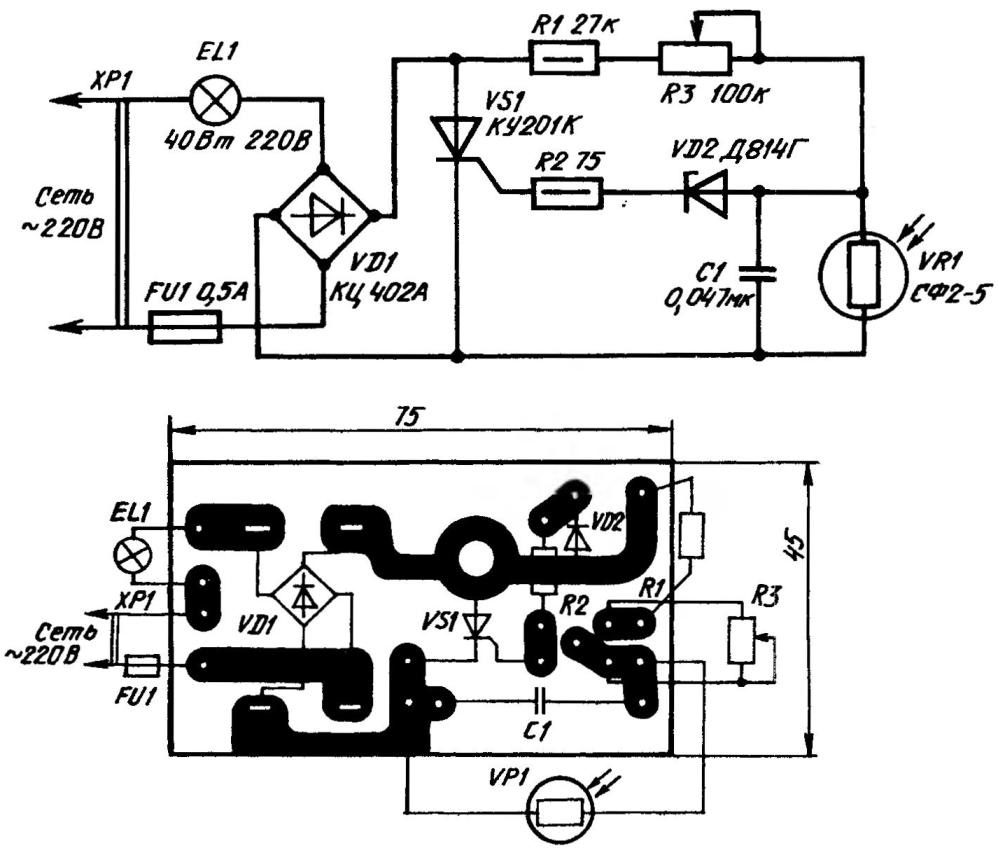 A circuit diagram and a printed circuit Board, a homemade machine incorporating stair and corridor lighting
Variable resistor R3 adjusts the threshold of the machine depending on the light.
Almost all items are homemade ALCO fit on a printed circuit Board of glass epoxy or phenolic paper sizes 75x45x1,5 mm. After Assembly and brazing machine fee is covered by the protective napolcom. The case is a suitable size plastic soap dish.
Instead СФ2-5 in the machine, you can apply the FSD-G1, FSK-1 and FSK-6. The latter are preferably placed in a sealed transparent case.
As the diode bridge will fit КЦ402 with any index in name or similar semiconductors with reverse voltage of at least 300 V. Choice of the Zener diode is also critical: if only such a parameter as ΔUст was 10-15 V. the Thyristor КУ201К completely replace КУ201Л or КУ202 with an alphabetical index from K To N.
Fixed resistors R1 and R2, you can choose from the MLT-0,5, and variable R3 is — among metallocene SP2-3. Capacitor — MBM with a rated voltage of 400 V.
The establishment of a correctly assembled machine is reduced to the sensitivity setting variable resistor R3. VR1 and photoresistor should be placed so that the incident light from the lamp EL1 or from the street lights. This eliminates false positives ALCO.
A. UVAROV, Belgorod