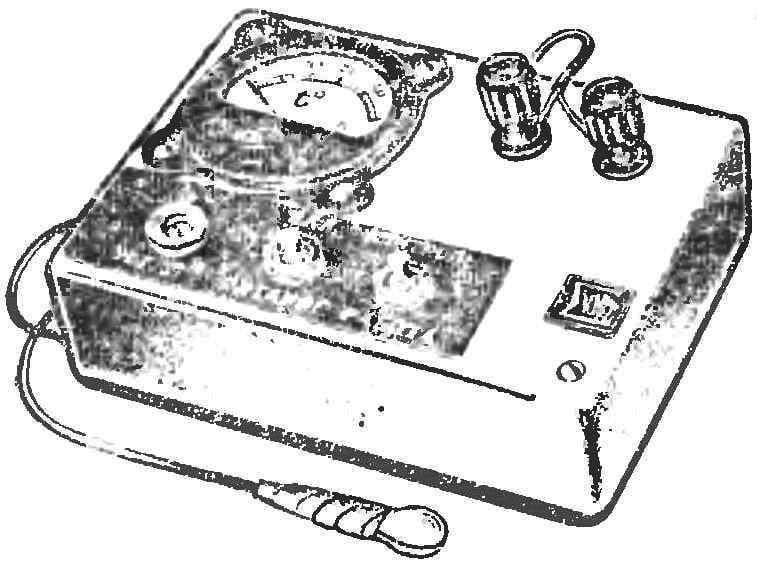 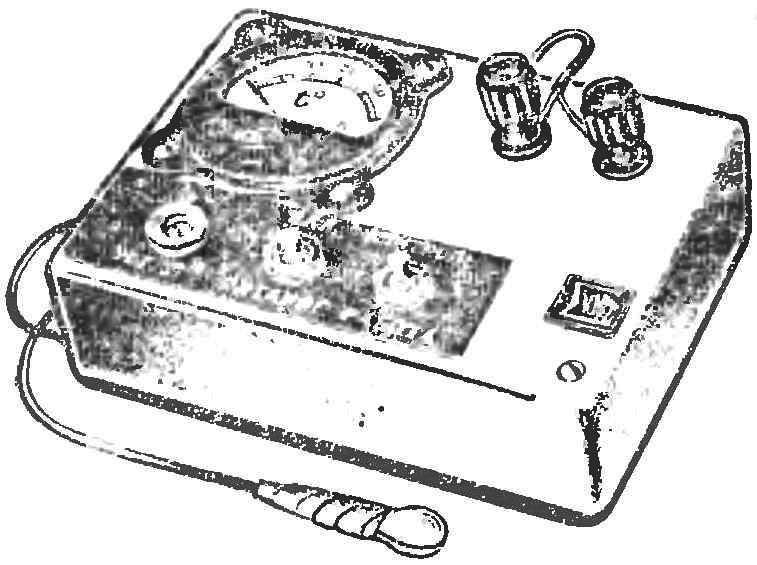 For the guys from the club for young technicians Novosibirsk Akademgorodok has long been the rule: the work performed in the groups should be of a socially useful nature, contain elements of novelty and originality. When it was announced the competition “Young technology — agriculture”, butovtsy developed and produced for the collective farms and state farms the number of interesting devices. This measure humidity and temperature, automatic regulators, apparatus for determining the protein content in the wheat grains and the degree of oil contamination in the centrifuge of the tractor. Using an electronic thermometer, for example, it is convenient to measure the temperature of the grain, potatoes, soil. Guys the Steppe school Iskitim district of such thermometers are used for temperature control in potato storage.
But agriculture is not the only consumer of the products of group. A variety of versions of the same electronic thermometer is demand for it and other customers: physicians, biologists, and even kart. According to experts, the devices manufactured by the guys, easy to work with. Skill and search of young technicians received the recognition it deserves. Evidence of this — the right to be represented at the Central exhibition NTTM-74.
Today the designs of electronic thermometers — thermometers without mercury, created in Novosibirsk children,—says the head of the laboratory of automation Kuta USSR Academy of Sciences, A. TEREK
In the thermometer, whose scheme is shown in figure 1, the temperature sensor is a thermistor R1. Temperature readout is on a scale of microammeter, scaled by s. the Thermistor is included in the shoulder bridge formed by resistors R1—R5. Using peremennoy resistor R2, the meter pointer is set to 0. The range of measured temperatures ranging from -10° to +80° selected by changing the value of resistor R6.
The thermometer is powered from one element 373 (“Mars”). Control power source is carried out using switch Q1. The value of resistor R7 is chosen in such a way that the “Control” position of the switch Q1, the current flowing through the measuring device ИП1, caused full deflection of the instrument at rated voltage of the element.
Details electrotermometria: microammeter 50 µa thermistor MMT-12 (MMT-1, MMT-4) with a nominal resistance value in the range of 0.5—1 kω, resistors R3—R7 — MLT, OMLT, VS; a variable resistor R2, SP, SPO; the switches B1 and B2 — TP1-2 and T2 respectively.
With some cases, it is necessary to measure temperature simultaneously at multiple points, for example in potato storages. In the right places install individual sensors, and their switching with the measuring part of the thermometer was carried out in a switch (Fig. 2). In this case, it is necessary to pick up resistors with the same nominal resistance value, in order to avoid mistakes in the readings.
In an electronic thermometer, a diagram is shown in figure 3, the sensor performs the role of the transistor. The device operation is based on the dependence of transistor parameters on temperature.
Temperature readout, as in the previous device, is produced on the scale of the microammeter with divisions in degrees. Zero setting and selection of the required temperature range are made by using variable resistors R1 and R6. 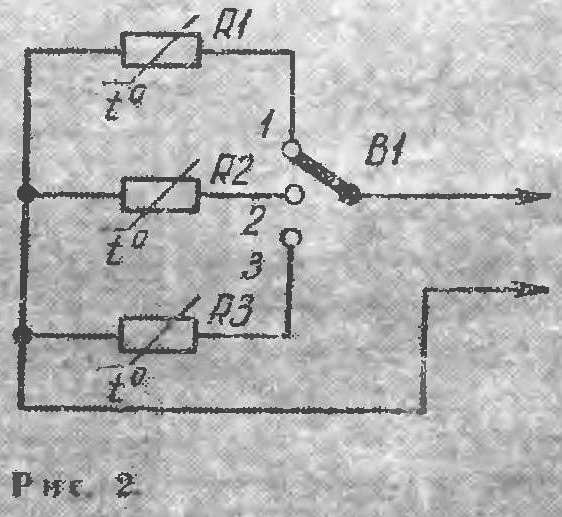 The thermometer is powered by two series-connected battery 336Л (KBS-L-0,5). To reduce measurement error associated with the discharge of the batteries, in the diagram, the applied voltage stabilizers КСТ33А.
Parts of thermometer: microampere meter is 100 µa, and the resistors R2 — R5, R7 — MLT, OMLT or the sun, the variable resistors R1 and R6, SP, SPO, the switch Q1 to switch the type T2.
The greatest accuracy has a medical thermometer (Fig. 4). It is designed to measure surface temperature of human skin at specific points. The thermometer can also be used for removing temperature maps of a person under physiological studies of labour processes.
The device operates in two ranges: 20° -30° and 30°-40°. The accuracy of temperature measurement below 0,1°.
The temperature sensor is a thermistor TM-12. It has small;th thermal inertia, which is very important during mass surveys.
The thermistor is included in the bridge circuit. Washes is powered by two series-connected batteries “Crown”. The voltage stabilized by the Zener diode D1.
The signal from the bridge is fed to a DC amplifier transistors T1 and T2. With the help of variable resistors R17 and R4 arrow of the microammeter set to 0: the first — when balancing instrument, the second — when you install a thermometer at the beginning of the temperature range. The handle of this resistor is displayed on the instrument’s front panel.
Switching ranges of measured temperatures is the main switch Q1. Switch Q3 serves to control the voltage of the battery B2: in the “Control” microamperemeter connected thereto through a resistor R19. If the battery B2 is discharged, the arrow ИП1 must be at the end of the scale,
On the discharge of the battery B1 is judged by the change of the readings of microamps/ETRA, turning the knob of the variable resistor R4.
Parts of thermometer: a microammeter 200 µa, B1, B2 — battery “Krona”, the constant resistors — MLT, OMLT or the sun, variable resistors R4, 7 — SP, SPO, switches B1 — B3 — double-pole toggle switches TP1-2.
Housing and front panel thermometers are made of plastic or duralumin (see Fig. in the beginning of the article). The temperature sensor is connected to terminals located on the front panel.
The sensor should be placed in a metal protective casing. This will prevent the sensing element from damage.
Calibration of electronic thermometers is carried out using a conventional mercury thermometer. For this the temperature sensor and the mercury thermometer placed in some environment, the temperature to yurom can be continuously changed.
In the calibration and temperature measurements need to take into account the thermal inertia of the sensor.
The readings of the ammeter corresponding to the measured temperature, establishes immediately, but after 100-300 (depending on the humidity environment where the temperature is measured). If the temperature sensor is always in a controlled environment, the inertia sensor has no practical significance.