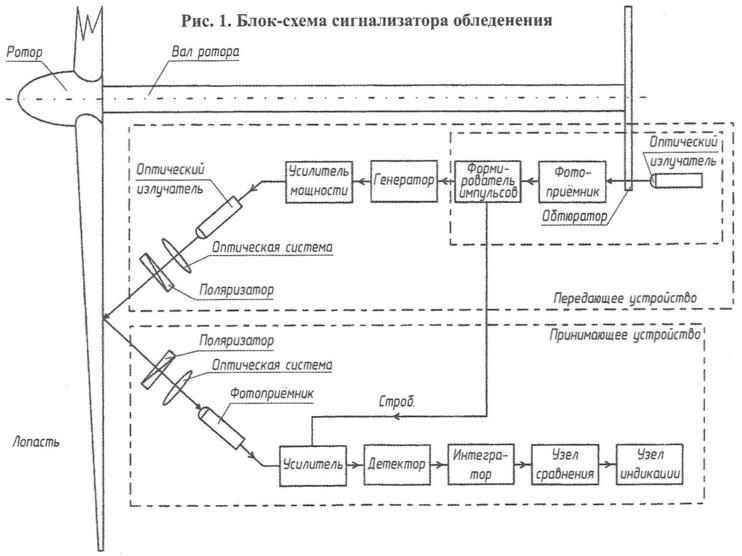 The formation of ice on the surface of the blades of the rotor (screw) microgenerator-ROV, wind turbines, anemometers, propeller vanes, fans, degrades performance and may lead to dangerous modes of operation – imbalance, vibration, destruction of bearings, the possibility of destruction of the structural elements is relieved by ice. To prevent such operation it is necessary to detect and eliminate incipient icing.

The proposed indicator can serve as a basis protivoallergennye-tional system of such devices. Its principle of operation is based on polarization-optical method for remote monitoring of the presence of ice [1], which provides high sensitivity and speed. In its technical essence is the device closest to the signaller icing of the propeller blades of the helicopter [2], pomekhoustoichivost.

The block diagram of the alarm device shown in Fig. 1. It consists of transmitting and receiving devices. The transmitting device comprises a synchronization host, generator, power amplifier, optical transmitter, optical system and a polarizer. The node of the synchronization includes the obturator, an optical emitter, the photodetector and the pulse shaper.

Node synchronization through pulse shaper controls the operation of the transmitting and receiving devices of the alarm device so that radiation of the transmitting unit occurred only in those moments of time when a rotor blade intersects its optical axis. In these moments, the gain of the amplifier of a receiving device is maximum. At other times the sending device does not emit, and the gain of the amplifier of the receiver is minimal.

When the rotor arm crosses the optical axis of the transmitting device, the output of the generator is formed by a sequence of rectangular pulses, which through the power amplifier modulates the amplitude of its radiation. This radiation passes through an optical system forming the beam with a small divergence angle, and polarizer that transmits only those waves, the polarization plane of which coincides with its plane of polarization.

Polarized beam reaches the surface of the rotor blades and being reflected from it, gets to the entrance of the receptor. In the receiving device the beam is a polarizer, the plane of polarization which is turned by the angle providing the minimum level of passing through it of the reflected optical radiation. This radiation is focused by the optical system receiving device on the sensing element of the photodetector, which converts it into an electrical signal. Electric signal output from the photodetector, passing successively through functional units of a receiver, amplified, detected, integrated and analyzed at the amplitude node of the comparison, control operation of the display unit.

If there is icing of the rotor blades, the beam reflected from the ice layer depolarized. The reflected waves whose plane of polarization coincides with the plane of polarization of the polarizer located in the receiving device, pass through it freely, so that the amplitude of the electrical signal at the output of the photodetector increases, and the display unit of the receiving device generates a warning signal about the presence of icing.

The elimination of natural or forced through a layer of ice from the surface of the rotor blade stops the depolarization of reflected beam, whereby an electrical signal at the output of the photodetector is reduced to the initial level. The display unit of the receiving device generates a warning signal about the lack of icing. 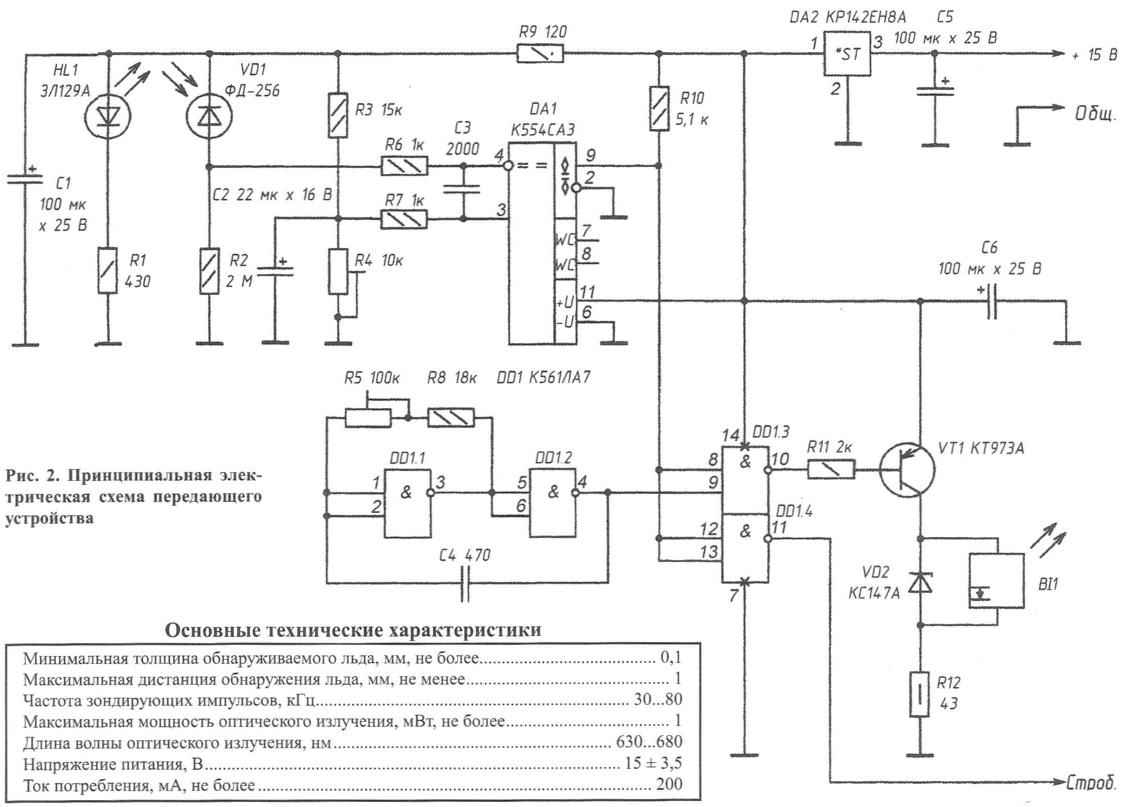 Fig. 2. A circuit diagram of a transmitting device

A circuit diagram of a receiving device shown in Fig. 3. Adopted optical radiation is converted into an electrical signal by photodiode VD1. Amplifier receiver made on microcircuits DA1, DA2, resistors R1 – R14 and capacitors C1 – C4. The voltage divider R1, R12, resistors R2, R7, R10, R14 provide for the operation of the circuits DA1, DA2 DC. Resistors R3 – R5 and capacitor Sz form a chain of negative feedback (NFB) of the first amplifier stage. The circuit is OOS of the second stage of the amplifier consists of a resistor R9, channel field-effect transistor VT1 and resistor R13. Resistors R6, R8 and R11 provide a mode of operation of the DC bipolar VT2 VT1 and the field effect transistors, respectively. Capacitors C2, C4 separation. The amplifier is powered by voltage regulator, implemented on the chip DA3. Capacitors C1, C6, C9 – filter.

Fig. 3. A circuit diagram of a receiving device

The details of transmitting and receiving devices of the alarm device mounted in hinged manner on the breadboard.

The establishment of the transmitting device of the alarm device is to install a trimmer resistors R4 and R5 (Fig. 2) the response voltage of the pulse shaper and the working frequency of the generator, respectively. The working frequency of the generator should be installed within the bandwidth of the amplifier receiver. In the presence of a radiation transmitting device make sure. The sensitivity of the alarm adjust trimmer resistors R15 and R16 (Fig. 3) that sets the gain of the amplifier and the threshold comparison unit, respectively. Flashing mode led HL1 (Fig. 3) is achieved by selection of resistor R19.

During configuration of the alarm device the ice can be simulated cellophane or plastic wrap, placing it on the surface of the test object. The final regulation of the signalling device are produced in real icing by orienting the transmitting and receiving device relative to the surface of the blades of the controlled object, and the polarizer receptor – relative to the polarizer transmission device so that in the absence of icing, the amplitude of the signal at the output of op-amp DА2 (Fig. 3) was minimal, if any — max. High achieve also a change in the focal length of the optical system of the receptor.

It should be noted that the above-described alarm device suitable for monitoring icing of the blades, made of electrically conductive material. If the blades are made of dielectric material, polarizing the reflected beam, in a controlled area necessary to ensure their continuity, for example, securing the blade strips of thin aluminum foil. When working with the indicator avoid contact with direct or reflected laser beam directly into the eye.