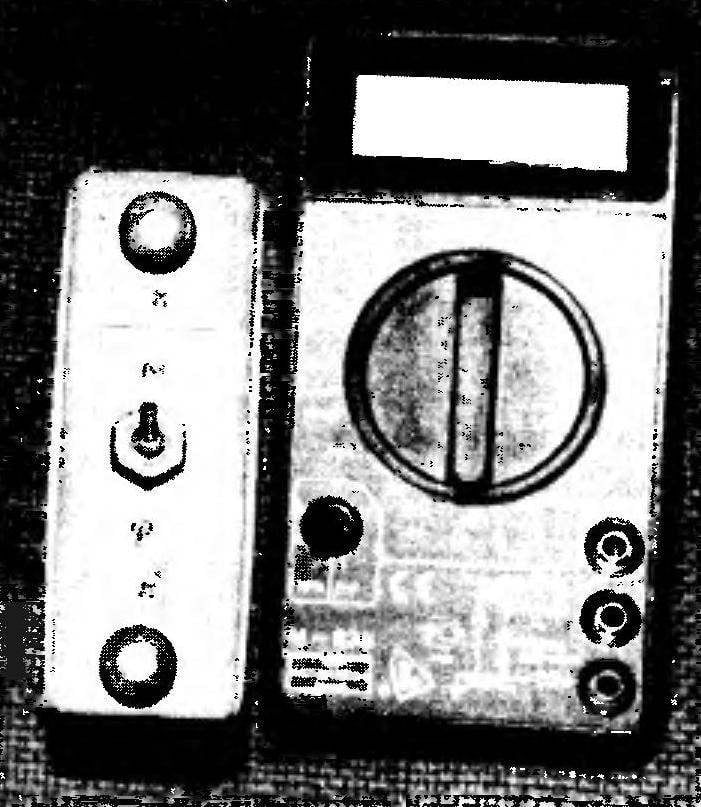 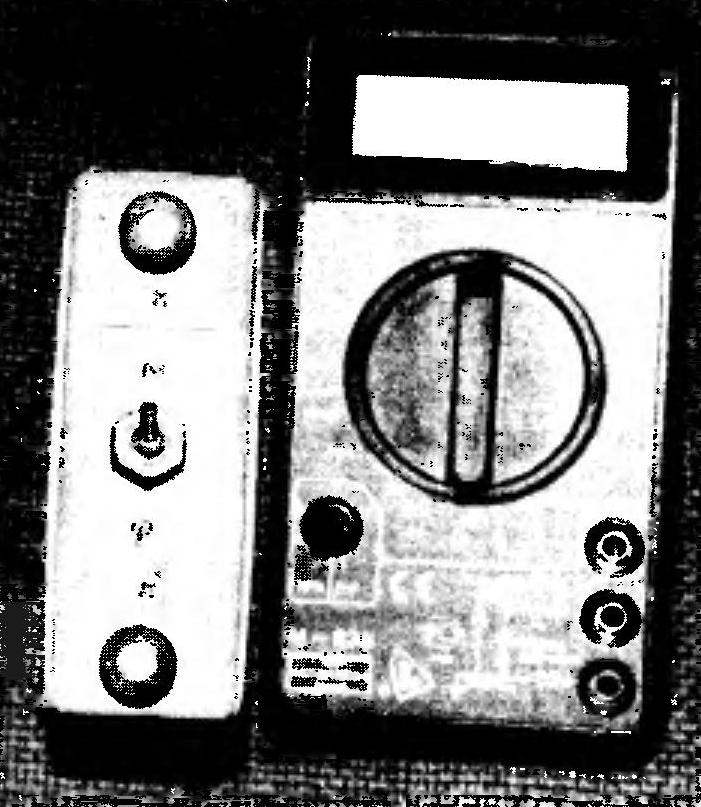 As in the previously published the console, the installation of its new version is “Welt” printed circuit Board foil fiberglass 83x35x1,5 mm. Used resistors — MLT, the capacitors C1 — C3 — MBM, C4 — C50-12; switch БВ1 — toggle П1Т-1 (or any other, preferably from among small-sized counterparts). Coil 1.1 — call from the telephone or homemade (10,000 turns of PEV-0,08 on a cardboard frame cross-section 12×8 mm with cheeks 21×21 mm, at the distance of 26 mm from each other); its DC resistance is 1.7 kω.
Prior to establishing exit consoles connected to the multimeter, is included as a microammeter with a measuring range 2000 µa, the switch SB1 is set to the “f”. Feeding the input of the mini-complex DC voltage 12-14 V, the selection of resistors R2 and R3, they seek evidence that is equal to 360/z (ua). For a four cylinder engine it is 90 µa. Make sure that the readings in each dimension is numerically equal to the measured value.
Then switch SB1 in “N” position and feeding the input of the prefix installation variable voltage (12-14 V, 50 Hz) matching capacitors C1—C3 to achieve indexing basic microammeter “cherished” 150 µa. From now on, when measuring the number of revolutions of the engine the readings must be multiplied by 10.
Here, for example, the sequence of actions when the configuration of the car “the Zhiguli”. The console is attached in parallel with the breaker contacts. Start the engine and set the appliance switch in position “f”. If the device shows 35 µa, the measured angle of the open state of the breaker contacts is equal to 35°. The estimated parameter is the angle of the closed state of contact breaker — in this case is: 90°-35° = 55°, which corresponds to the technical characteristics of the car. So, the gap between the contact breaker is installed correctly. Otherwise, the engine stopped, change the gap between the breaker contacts and again make measurements. Then set the ignition timing according to the factory manual. 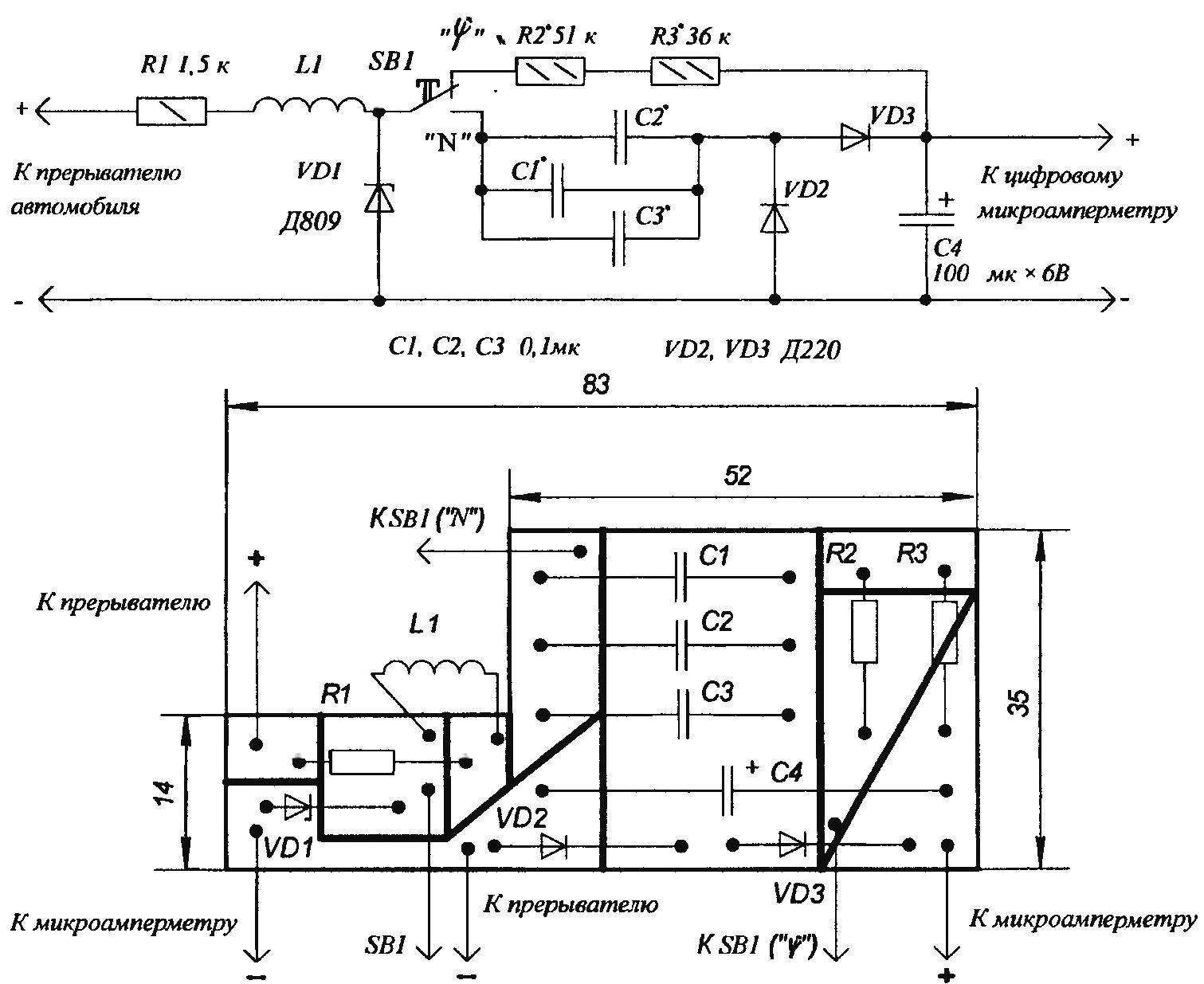 Electrical schematic, printed circuit Board, and the attachment to the ammeter of a digital multimeter, turning the latter into a truly indispensable device for automotoportal
For the idle setting of the carburetor set (screw adjusting the amount of fuel mixture) the engine speed is in the range of 900-950 rpm. thus the digital display device (with a pre-switched to the “N” switch), the appropriate value appears: 90 to 95 µa. Then, without changing position on the above settings, maximize engine speed with the adjusting screw of quality of a mix.
But that’s not all. Avertive screw adjusting the amount of the fuel mixture, reduce the engine speed to 900-950 rpm, And again the adjusting screw of quality of a mix to maximize momentum.
The above-mentioned operations are performed until, until the screw adjust the fuel mixture will be impossible to increase the engine speed. After you begin to tighten the adjustment screw of quality of a mix. And they do it to until the digital display device does not appear to be treasured 75-80 µa, corresponding to the frequency of rotation of the crankshaft equal to 750-800 rpm In the vast majority of cases, when this adjustment fails to achieve the required fuel economy at minimal levels in the exhaust gases, do not go beyond permissible sanitary norms.
N. HERZEN, Berezniki, Perm region.