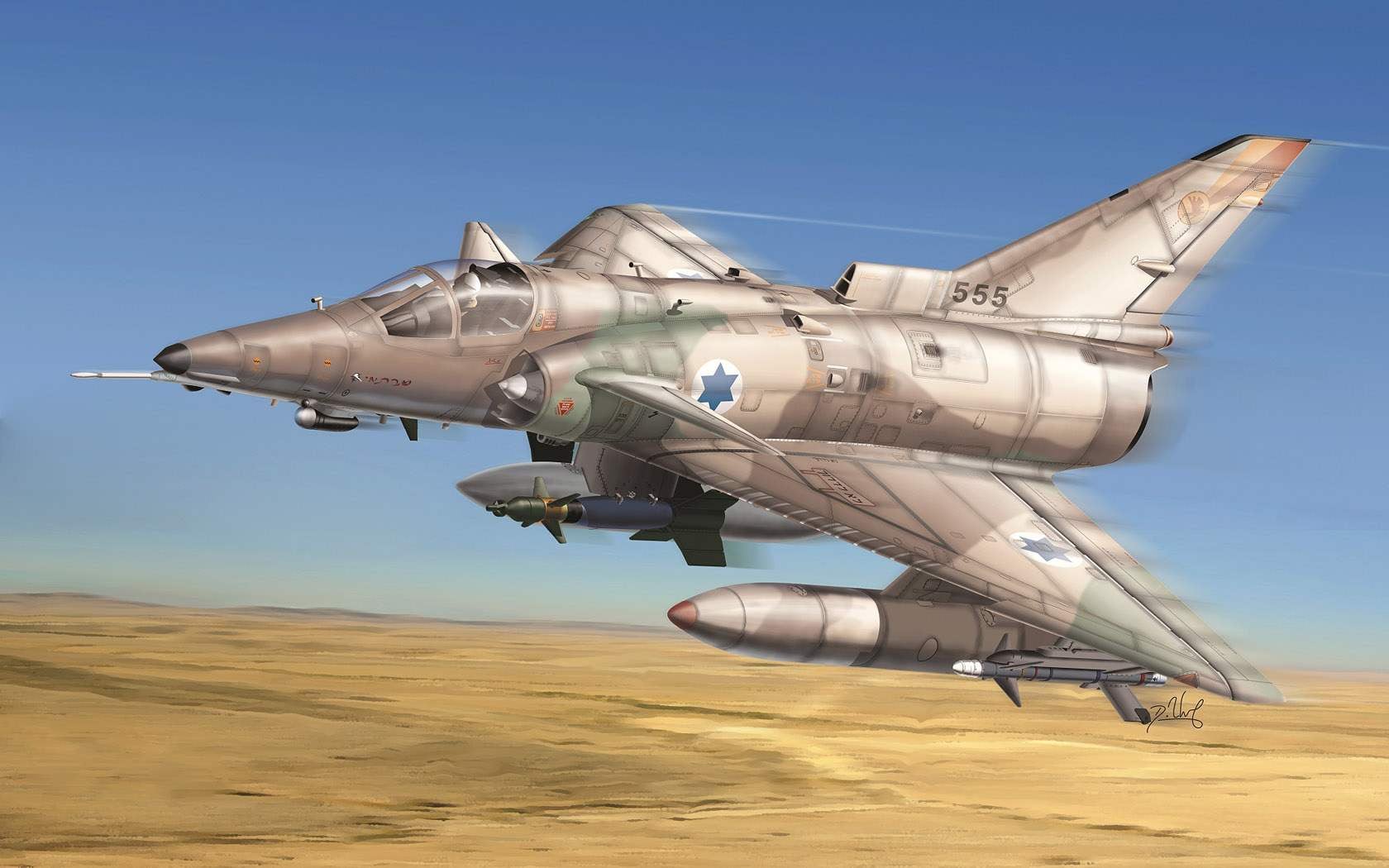 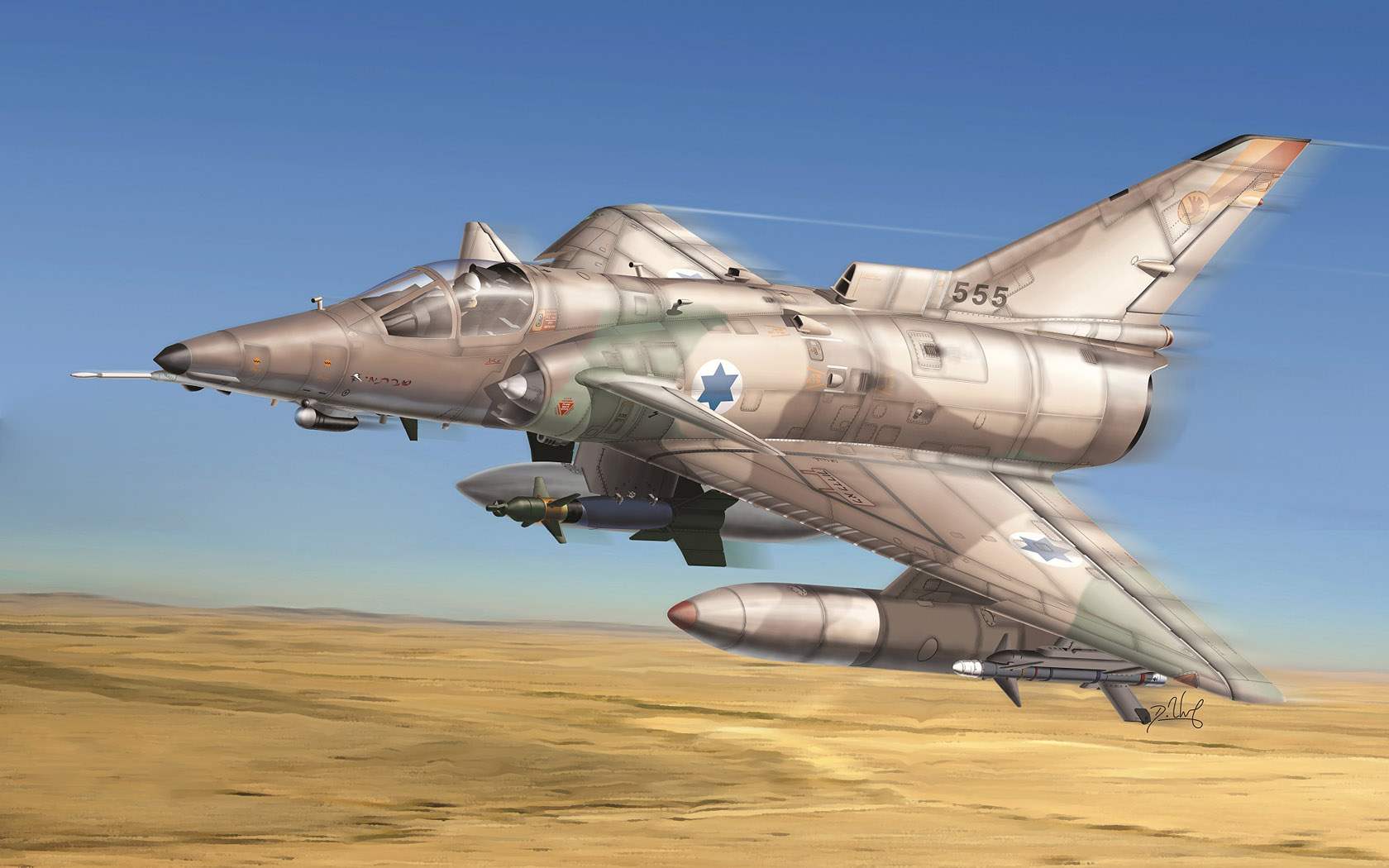 Israeli fighter “Kfir”. In 1967 the French President Charles de Gaulle banned the supply of arms to Israel. This decision was a response to the Israeli attack on the neighboring Arab countries, which is known as the “six day war”. Under the ban got the 50 “Mirage” M5J. Desire to obtain their aircraft, in spite of bans, prompted the Israelis to search the other way. In the same year representatives of the company IAI (Israel Aircraft Industries – Israel Aircraft Industry) began negotiating with Dassault on the issue of licensed production of the fifth “Mirage”. A sudden obstacle in the form of an embargo, President de Gaulle, in calculation were not accepted. Representatives of Dassault, believed that this prohibition applies only to state enterprises. In late 1967 negotiations successfully ended with the signing of the contract. Thus, the Israelis have at their disposal all the necessary documentation and paper-modern technology. But it was only a glider, though with all systems, and it lacked the main engine.

Heart of Mirage – engine “Atar”, which was issued by the state enterprise SNECMA, and then the embargo was working without any exceptions. The level of scientific and production base of Israel at that time did not allow to reproduce the engine yourself. However, the main enterprise on repair of engines – the company bet Shemesh there was a certain amount of parts for turbojet engines, and even established a small manufacture of spare parts, but this was not enough. Special equipment, machine tools, precision casting, manufacture of special alloys, etc. – all this is simply absent. Beit Shemesh, of course, not stood still, in 1968, it was planned to put into operation a new modern factory, which was built jointly with Turbomeca, but without documentation and technologies for the engine build.
And then came to the aid of an unknown engineer Alfred Frauenknecht from Swiss firm Sulzer, which produced “Atari” licenses. According to one, he made contact and wanted to help Israel for ideological reasons, others say he was recruited by the Mossad and seduced by money. In General, it does not matter. The main thing is that Israel has gained access to so it needs documentation.
Frauenknecht, fully legal, on behalf of its leadership, have taken photographs of secret drawings on film, but the drawings were not sent to destroy, and transferred to Mossad agents. All he managed to smuggle into Israel 24 boxes of drawings and documents. On the last four boxes of Frauenknecht “sleeps” – he was arrested by the counterintelligence. After the investigation, Frauenknecht received four years in prison. 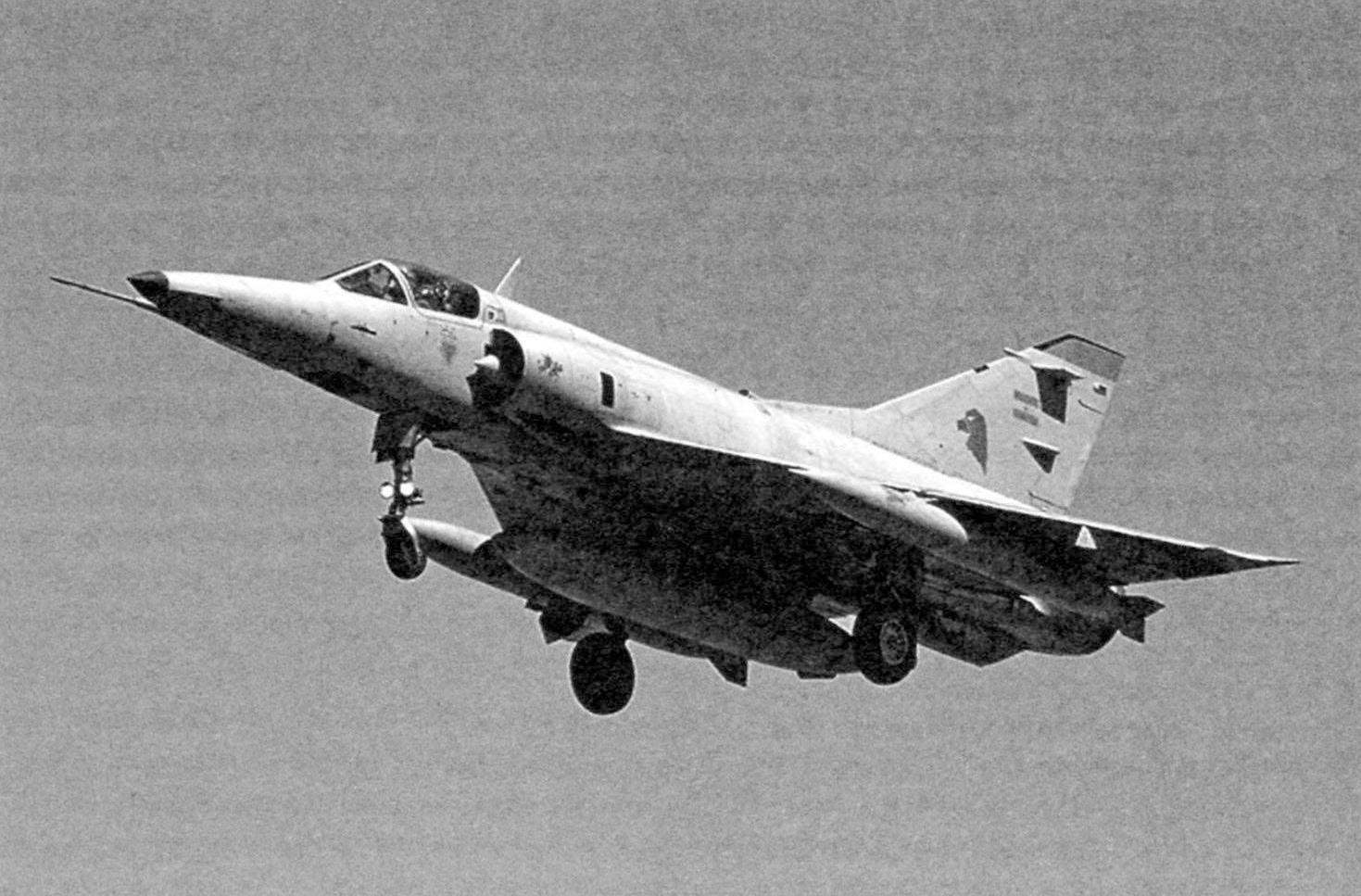 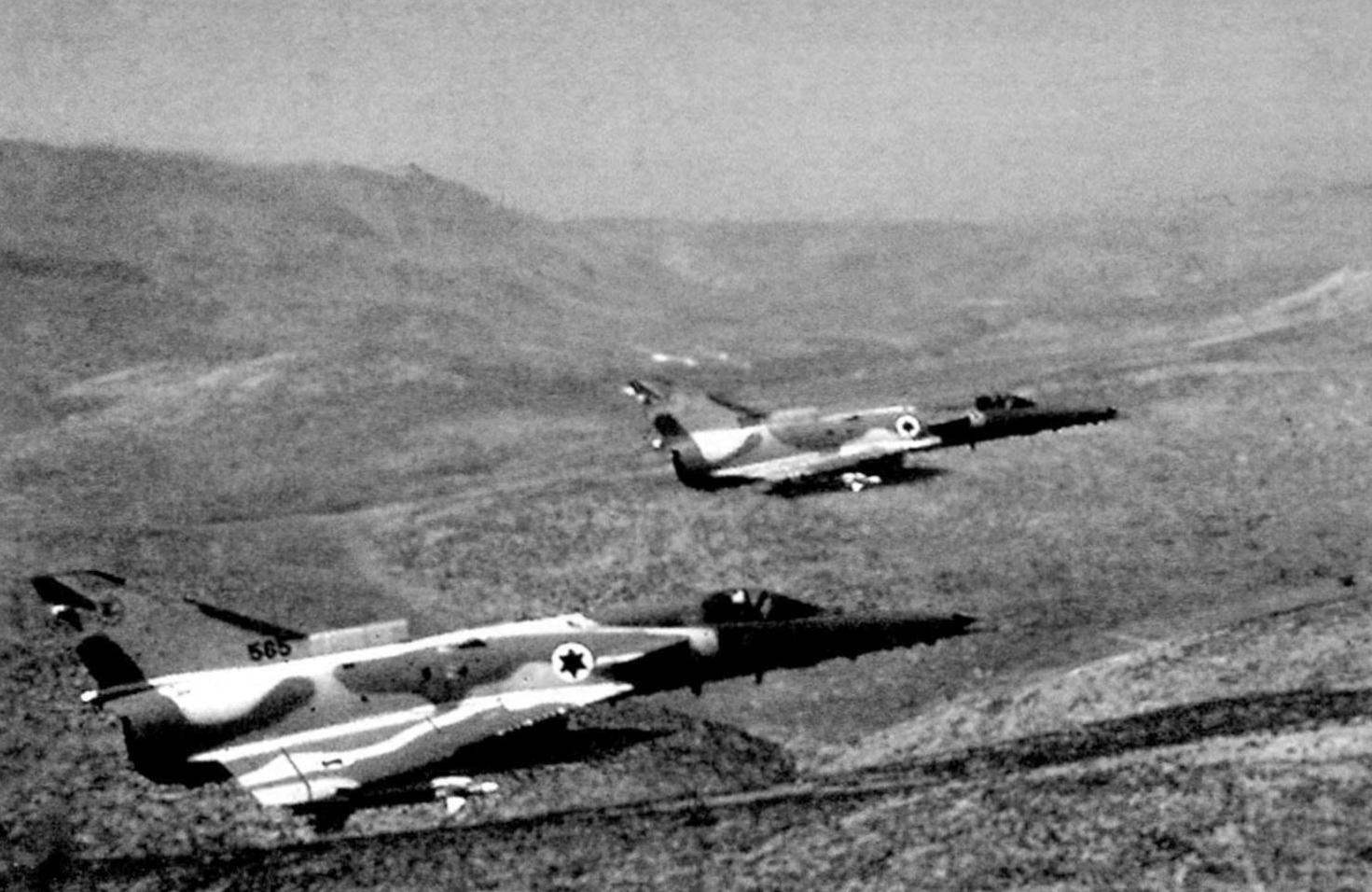 A pair of fighter “Kfir” C. 2 during a combat sortie
Now Israel has turned all the pieces “puzzle” under the name “Mirage” and it was possible to start production. Of course, such a complex task, how to make a plane from scratch, the firm IAI at the time did not put. The construction of the aircraft was carried out of the finished parts and assemblies. As the sample Dassault flown to Israel two airframe of the Mirage 5, with undocked consoles of the wing and the keel, under the guise of spare parts. All electronic equipment was doing in Israel firm Elbit, and the engine Atar 9C-3 produced company Beit Shemesh.
Stream “spare parts” for IAI were both open channels and in secret. Engineer IAI Moshe Keret recalled: “Everything was very secret. One day a very large batch of parts came wrapped in old clothes hidden in the furniture, pots and personal property simple Jewish family, we had people who became real professionals in packing and transporting these items…”
The aircraft was named “Nesher” (Hebrew for “eagle”). From its French counterpart, he was distinguished by the presence of a miniature radar “Aida” II (in fact, the radar range finder) and ejection seat company Martin Baker JM-6 instead of MK.4. The first flight of the fighter held on 21 March 1971. In may production aircraft began arriving in the 101st, and then in the 117-th squadron. And the old “Mirage” IIICJ of their composition is not displayed. 13 Oct “nusery” both units put into operation.
Specific fuel consumption

Production ended in February 1974. Total built 51 single rooms, 10 double planes “Nesher”. In the 1973 war “nusery” proved to be the best way. They were easier that the same engine was increased power to weight ratio. According to Israeli figures, from 211 Arab aircraft shot down in aerial combat, 113 on account of the pilots of the “Nesher”, and their losses amounted to a total of six cars.
After the war, “Naseri” still stood for some time in service, and then, beginning in April 1975, were sent for overhaul and was placed in storage. In 1978, 39 “Nesterov” (35 military and four double) sold to the air force Argentina (FAA – Fuerza, Aeea Argentina). The first 26 cars, among them two Sparky, arrived in South America in November 1978.
Externally, the Argentine aircraft differed from the “Nesterov” the presence of a characteristic of the antenna of the navigation system TACAN. Delivery was completed in 1982. Argentine fighters are called “dagger” A single and “dagger” In double (Dagger – from English. “Dagger”). Together with the aircraft were purchased and the Israeli missiles “air – air” “Sufrir” 2 that had the worst characteristics, than the existing FFA French UR “Magic” R. 550, but was cheaper.
Organizational “the duggars” brought in two squadrons of 6-th fighter air group, based in Tandil air base.
In 1982 “the duggars” took part in the Anglo-Argentine war. Losses amounted to 11 aircraft. Instead, Argentina has acquired a “Mirage” 5P from Peru and gave them the same Board rooms that downed “the duggars”. After the war began the modernization of the Argentine “dagger-Mirage” the program “finger” (Finger – eng. “Arrow”), “dagger” has set a new rangefinder radar ELTA EL-2001B and updated avionics to bring it to the level of “Kfira” p. 2. The next upgrade was in 1999. At this time, the aircraft “pumped” up to “Kfir” p. 7. Today in the ranks of FFA has ten “the duggars” (seven military and three doubles), sometimes referred to as in accordance with the program of modernization – “finger II”.
Embargo, President de Gaulle made Israel to look for alternative arms suppliers. This new seller of military equipment were the United States. In 1969, Israel has bought more than two hundred American “phantoms” and fifty light attack aircraft a-4 “Skyhawk”. From this point on, they were widely used in all conflicts in the middle East.
Israeli “Phantom” repeatedly subjected to modernization. It set the bar for refueling in the air, periodically updated the equipment and expanded the composition of the suspension arms. F-4E could use missiles “Safer” and “Python” for air combat and anti-ship UR “Gabriel” and protivoradiolokatsionnoy UR AGM-78B “Standard” ARM of the GOS of its own design. There have even been attempts to replace the gun “Volcano” by two 30-mm cannons DEFA from “Mirage.” It turned out that the effectiveness of short bursts (not more than 0.5 sec) of double-barreled 30-mm gun higher than the six-barrel “Volcano”. The superiority of the French guns was due to the greater mass of explosive substance in the projectile and greater kinetic energy. But the replacement tools required are so major changes in the design of the aircraft that this idea pretty quickly abandoned. 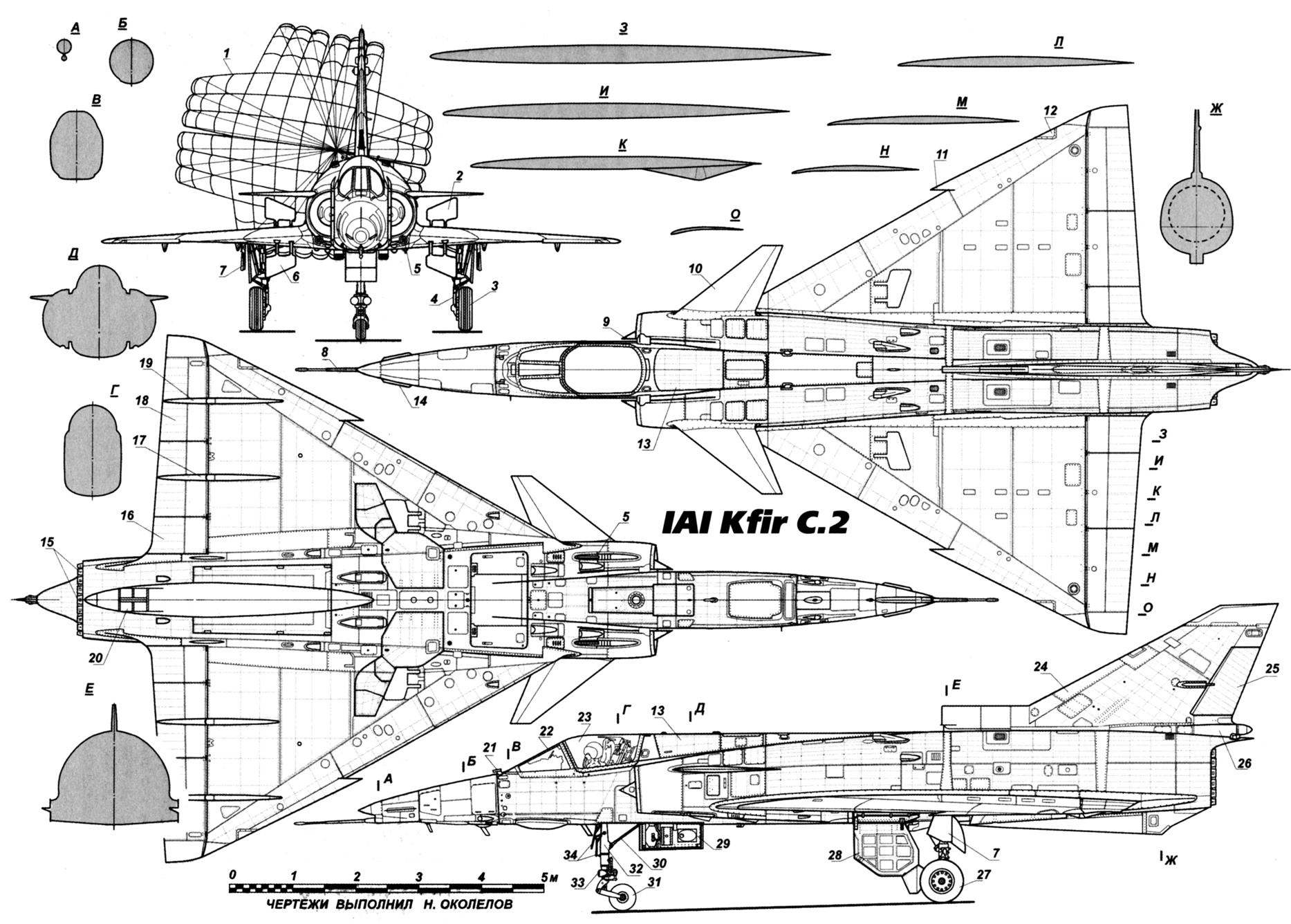 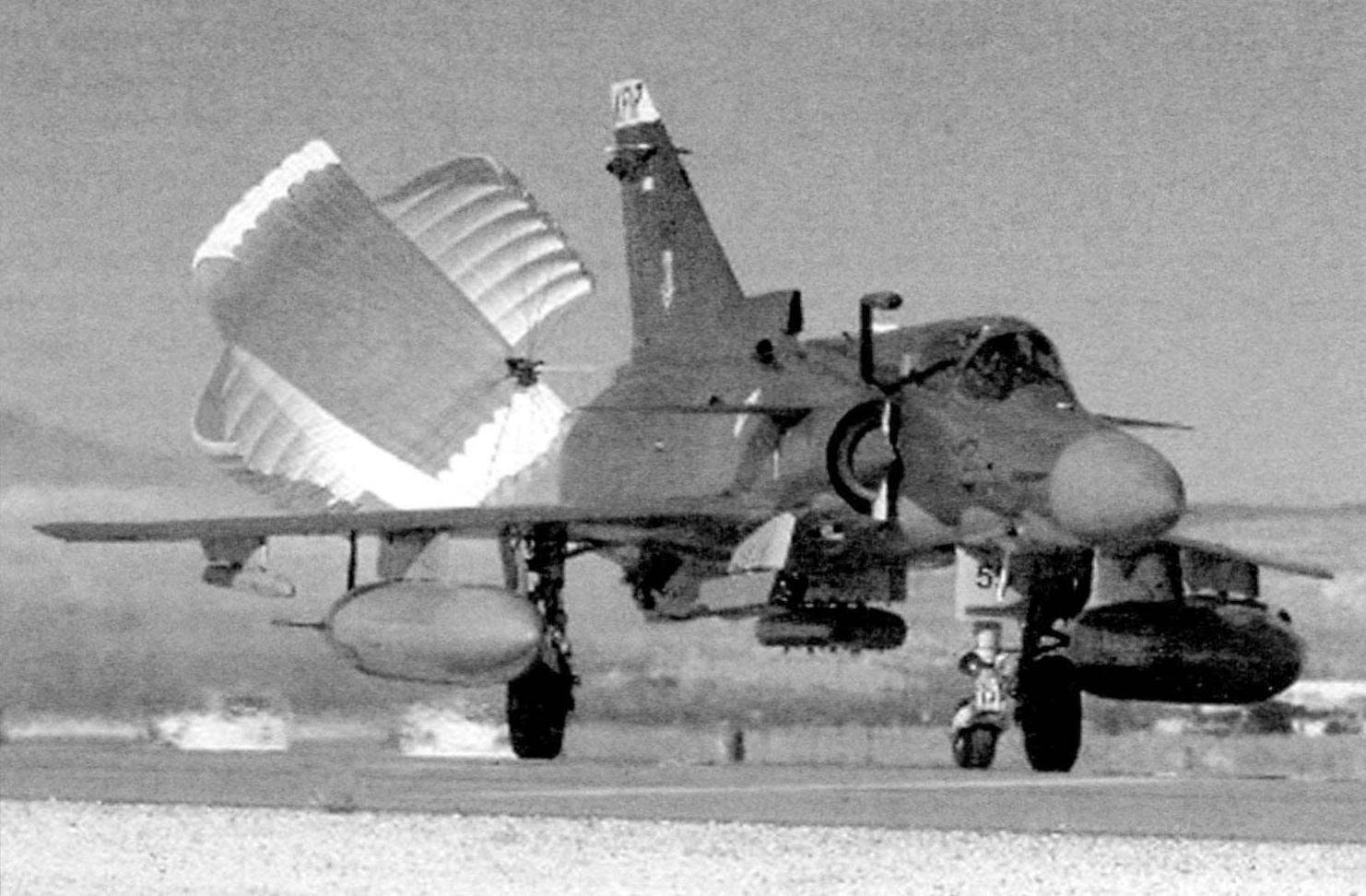 Fighter “Kfir” S. 10 carries out the landing brake parachutes
All these improvements are checked in the “technology” and immediately launched into the series. New modification received the designation “Kfir” p. 2. To increase payload under the air intakes secured two additional pylons, bringing the number of points of suspension from five to seven, and the maximum weight load up to 4295 kg. In the fore part, put the DME “ELTA” EL-2001, he was component of the sighting and navigation system S-8600. A compromise between stability and controllability on Board “Cfira” C. 2 was achieved with the help of an electric remote control system with double redundancy.
The first “Kfir” P. 2 No. 714 took off on 16 July 1974. The official presentation of the aircraft took place at an Airshow in the Day Israeli aircraft on 20 June 1976.
Attempt to demonstrate the new “Kfir” at the air show in Farnborough failed. Of course, that an official denial of Israel have not received, and inability to participate explained that the documents from the firm IAI was filed late. And generally the story of sales “Kirov” abroad was not very good. Attempt to sell ten cars C. 2 in Ecuador fell through in 1976, but rather, were blocked by the United States. The fact that the license for manufacture of the J79 had not foreseen the possibility of selling engine “third countries”. In addition, arming with modern equipment in Latin America went counter to U.S. policy in the region. Only in the early 1980-ies the Americans are a bit watered down and “cfira” broke international arms market. However, the plane had already started to become obsolete and the competition wasn’t as attractive as before.
It is also interesting the relation of the company to Dassault from the Israeli deep modifications. The founding fathers of the designers of the aircraft did not see or do not want to see “Fire” competitor. For example, in 1977, two “Kfir” C. 2 quietly revealed at the Paris air show, and any complaints about copyright etc. to the Israelis, nobody has put forward. Moreover, they even began to oversee the modification of the Swiss “Mirage” by installing them fixed the CHR.
However, the return to Israel. Production aircraft began to arrive in part in the spring of 1977. Just built a 185 cars. Maneuvering characteristics of the aircraft improved so much that all the “kfira” the first modification was converted into p. 2. However, the area of PGO they had less, because the frames to which it was attached, had no amplification. Designation of the modified aircraft was changed to “Kfir” P. 1. In 1985, 25 of these machines has leased the U.S. Navy and used them as imitators of the Soviet MiG-23 during mock battles. In the United States “Chiram” C. 1 assigned the designation F-21A. In 1989 they returned to Israel.
In 1978 work began on double training-combat variant “Kfira”. To free up space behind the cockpit failed due to the removal of the fuel tank and transfer air-conditioning system in the nose. Considerably lengthening the nose had to be lowered to avoid obstructing vision when landing. The aircraft could also be used as reconnaissance – for this is the bow with a radar rangefinder, installed the bow section with cameras. The first flight Sparky “Kfir” TS.2 took place in December 1980. 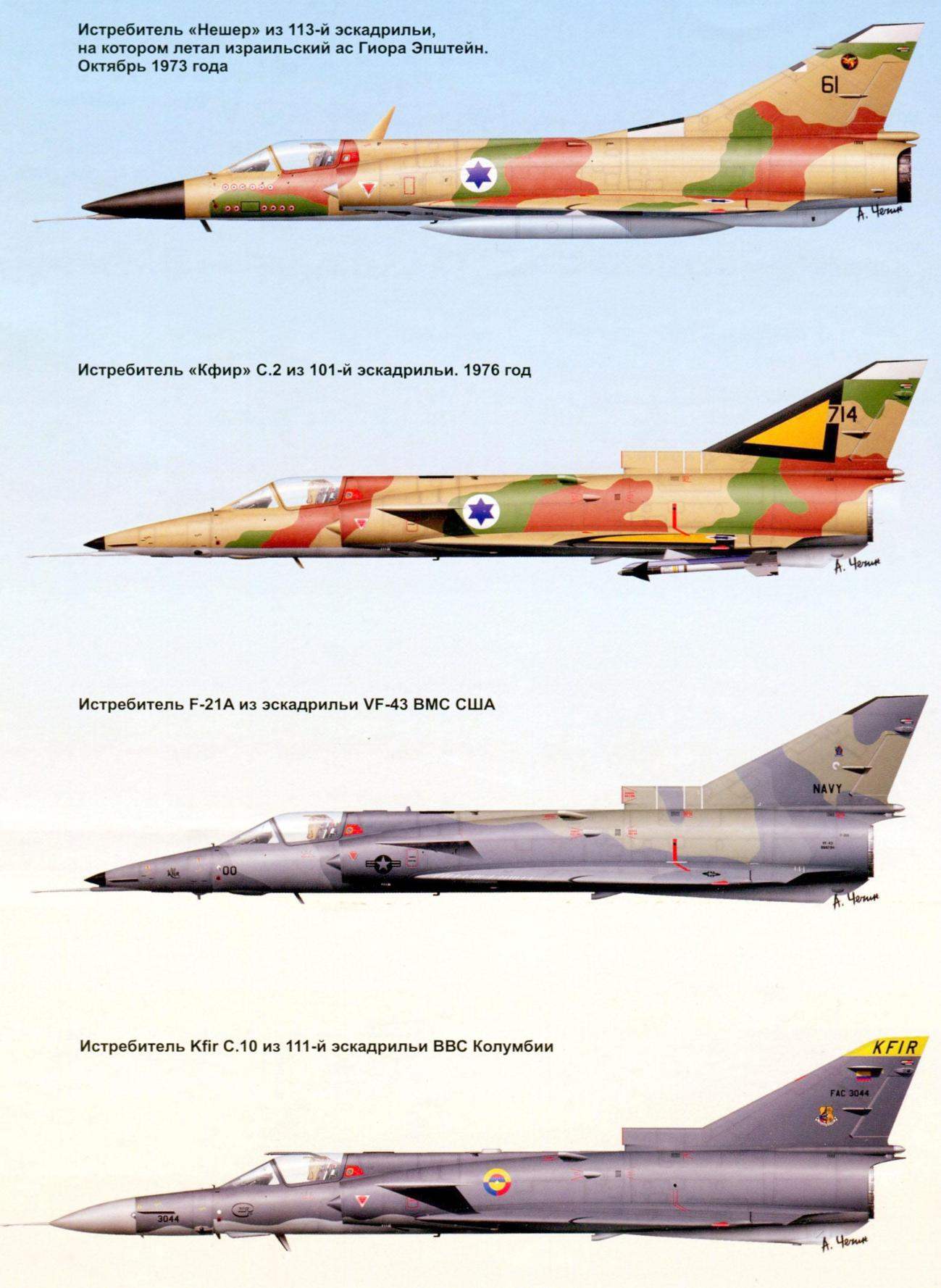