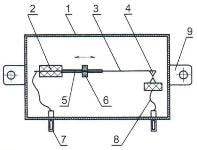 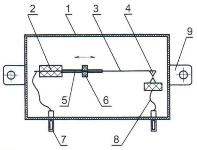 A set of electronic devices that use psychologists is constantly expanding. In addition to the “Polygraph” (the”lie detector”), there are other devices to test the emotional state of the person. The hallmark of the modern psychologists is electronic visual and sound indications, the ability to connect to the computer and transfer data across large distances. A simple device of this type it is not difficult to do with basic skills build the circuits.
The heart of the e-psychologist will serve as well known to all motorists element of the alarm -sensor is a pendulum swing. These sensors can be seen touching the car with the installed alarm: the slightest wiggle of the body – and now the whole neighborhood is filled with a deafening roar. The sensor device is clear from the figure. When rocking of the car body is swinging is also a thin long rod of the pendulum, which leads to the closure of the contacts. The sensitivity of the sensor can usually be adjusted, for example with the aid of the moveable Adjuster. The slider increases or decreases the amplitude of oscillations due to changing the length of the moving part of the pendulum.
The question may arise, what does all this have to do with the psychological state of a person? It turns out that the most direct. Shaking your hands or not – that’s as old as the world, the way to determine the level of stress, excitement, the person’s ability to control his body, “keep your hands to yourself”. Attaching automotive sensor swing to one wrist of the test subject or two sensors to each of the brushes, ask him horizontally extend hands in front of him. A visual or audible alarm will record a fact hand shake and even set the intensity of these involuntary movements. Of course, the hands may tremble for different reasons, particularly after intense physical exercise. And yet, ceteris paribus, the mentioned method of control “tremor” (so-called rapid rhythmic movements, shaking of body parts, limbs) allows to obtain additional information of a psychological nature. 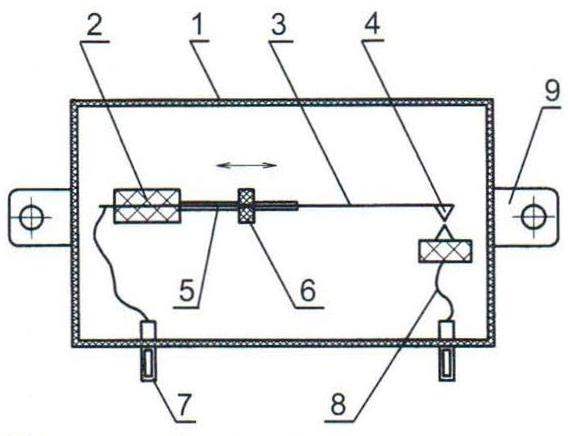 Pendulum sensor:
1 – housing; 2 – holder; 3 – a rod of a pendulum; 4 – contact; 5 – guiding slot; 6 – slider; 7 – clamp; 8 – a connecting cable; 9 – fastening strap
E-the psychologist of this design is convenient because of its simplicity, however, the ability to connect various additional devices to enhance the information content tests. Here are a few examples. Nothing should assemble a circuit consisting of a pendulum sensor swings, batteries, LEDs and buzzer, connected in series. With a very simple design like this “psychologist” has a lot tell about the presence and intensity of tremor in the language of light and sound signals. You can make it even easier. If you have a digital multimeter type Mastech M-838, it is equipped with a so-called function of “sound continuity”. Switch multimeter to “continuity test” and connect the probe device to the terminals of the sensor.
Contact closure sensor buzzer of the multimeter will emit a characteristic acoustic signal – a tremor!
It is possible to connect a device to the computer on which to install the program for recording and editing sound (e.g., a free sound file editor Audacity), and post near the buzzer microphone. Recording “sounds of the tremor” on the computer you will be able to analyze the frequency of hand-shake and the change of this parameter over time. Try to ask the subject of various questions and you will see how, depending on the complexity of the issue change the characteristics of the tremor. What is not a “polygraph”?
If in series with a pendulum sensor swings to connect the computer’s sound card the audio oscillator, the signal of the tremor can be recorded without using a buzzer and microphone. It is easy even to provide signal transmission over large distances in cases when the subject is in a different geographic location. There are many options, including the use of the Skype software (also freely available) and the technology of IP-telephony. Of course, for transmitting signals of tremor at large distances, you can use both conventional and mobile phone.
The scope of application of electronic devices-psychologists is expanding day by day. Increasingly, they are used in such fields of human activity, physical culture and sport. So the definition of tremor and its indicators tells professionals how much the athlete knows his body, controls his emotions, how easily he can wind down and relax after intense exercise. All this helps to organize the training process and, ultimately, achieve high performance.