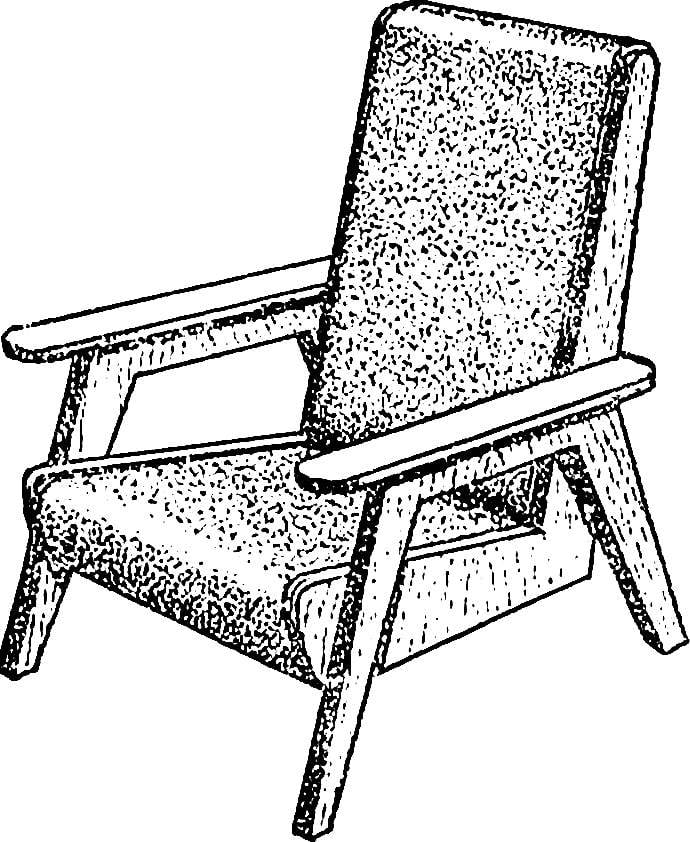 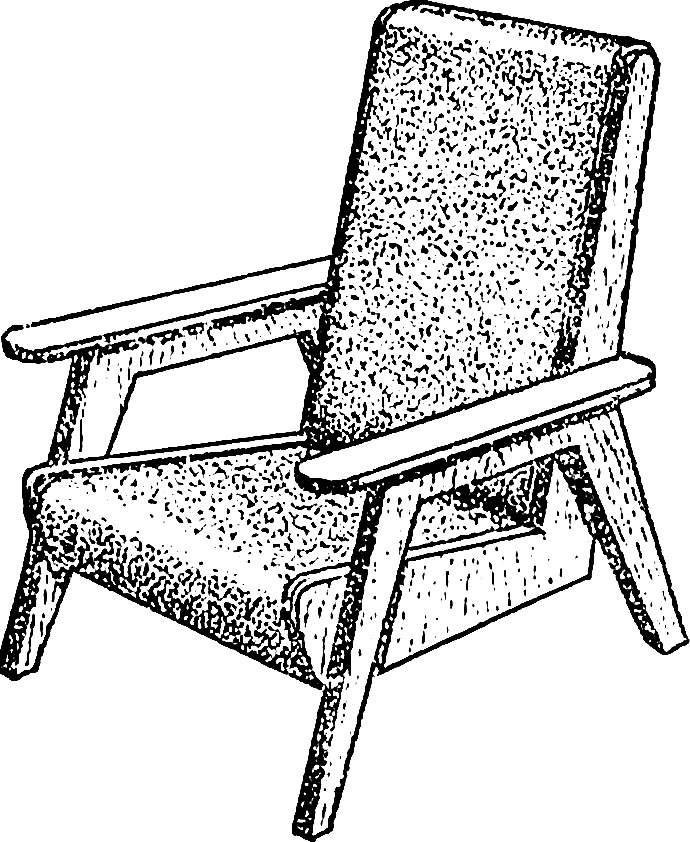 Furniture intended for sitting — chairs, armchairs, stools — in the home gets the most. And, therefore, it wears out much faster than any “dear wardrobe”. Often damaged structural members and assemblies: loose legs, “slack” seat starts to “walk” back. And the material it is upholstered, alas, is not eternal.
We offer several simple methods, using which it is possible to return such furniture to working condition.
1. Shaky legs is not difficult, of course, simply paste in its place. And one, and another, and another… This way you only some time to repair this defect. The connection node of the legs with the horizontal beams will be much stronger and more durable, when, in addition to the glue, it will strengthen any core, for example, Nagel. Here we need to act. Carefully pull apart the knot, if necessary, replace the dowel and glue-all in the insert seat. Now firmly tighten the coupling clamp, drill in the leg two or three through holes and hammer pins from solid wood with a diameter slightly larger than the hole. In the contracted position of the leg stand until the glue. Repair is preferable to use a joiner or epoksidny glue.
2. Sometimes a easy chair and straps his seat stretched out. Or fixing their nails fell out of their sockets. As a result, the seat and the pit.
If belts are worn, replace them with new ones, pulling through a piece of wood. One end of the strap is fixed to the frame, and the other pull through the bar so that the free end was clamped between the frame and the brick. The stretched belt is fixed with two nails, and the excess length cut off. The remaining 20 to 30 mm is bent and nailed a couple of nails. Between the belts to do the interval 60-100 mm.
3. Can still be of use and old hard chair or a chair with a broken seat and back. To restore such a subject, the headset will only need synthetic linen thread. It can be used to make wicker back and seat. 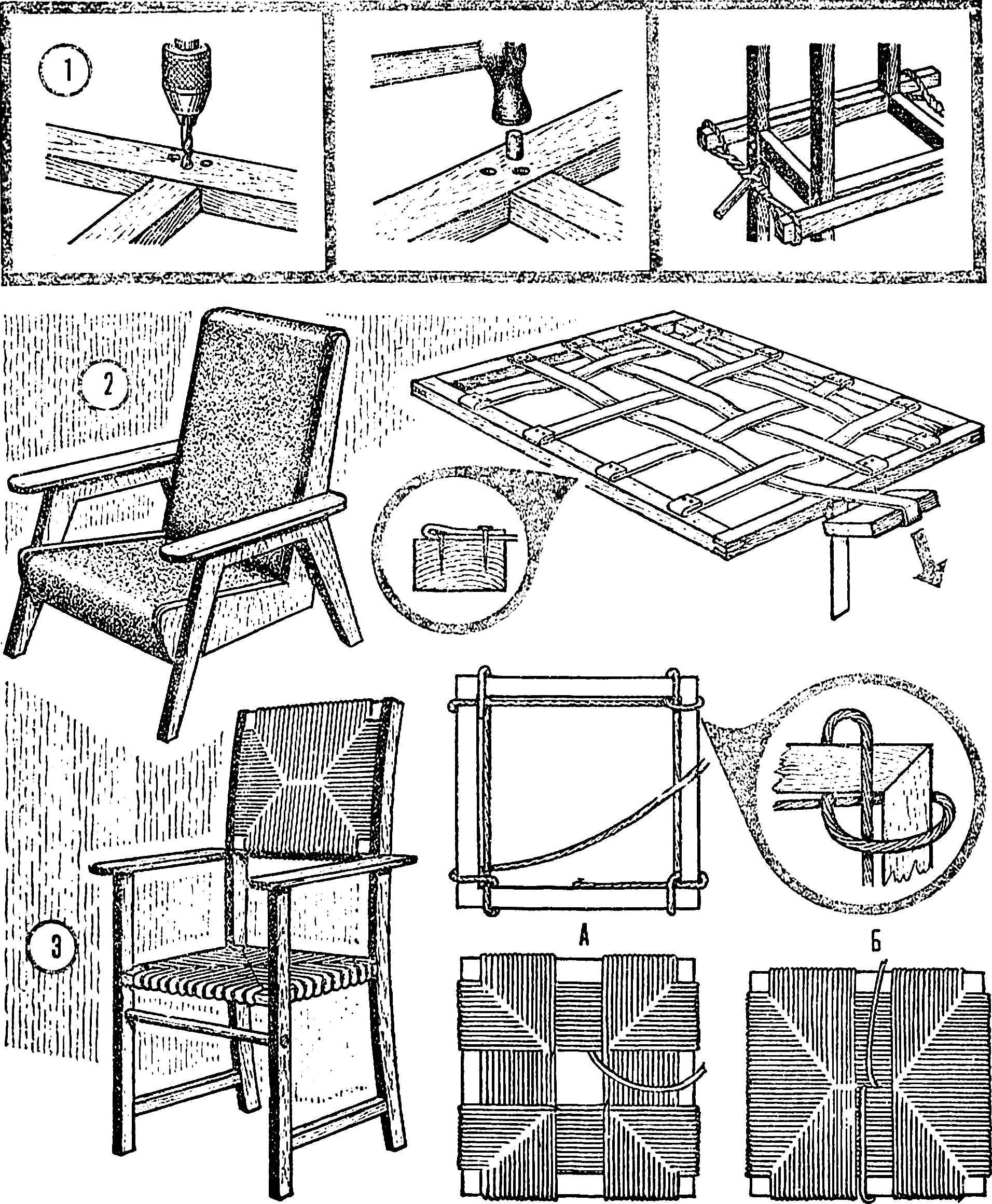 To do this, clear the old items: upholstery, pads, remove the straps or broken bottom. On the inner side of the frame hammer the nail in to it and attach one end of the linen cord. Next, determine the further direction of winding: clockwise or counterclockwise. First make the cord around the adjacent rail, and, returning, one revolution around the primary. Slack the cord to the next corner and repeat the operation. So consistently splitco with the corner to corner until, until you get a solid rope-plane (option a). in the middle of the end of the braid is closed up inside.
If the frame is not square and elongated rectangular shape, the beginning stages are the previous method. But a smaller part of the frame was filled, only the middle of a big left unbound. From this point the cord begin to pass only between the long sides until it fills the whole plane (option B).
Ready the seat and backrest set on a former place. To refurbished product looked spectacular, should be used in the braid of a contrasting color scheme: for example, if the bearing elements have a dark tone, then the cord should choose light and Vice versa.
According to the magazine “Guide yourself”, Bulgaria