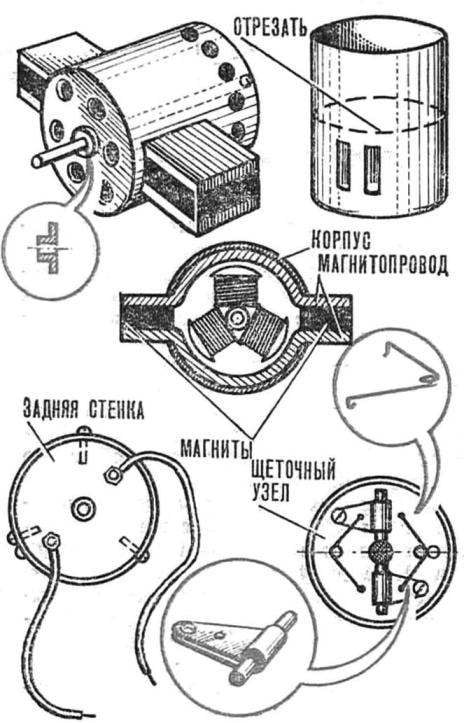 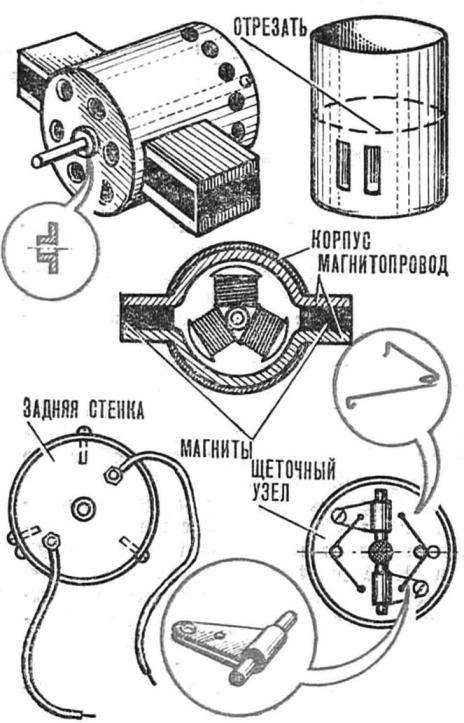 Powerful, reliable and durable motor is needed and builders of electrics, and the followers of the trace of automodelisme. Unfortunately, those that have been produced by our industry for toys, in no way not satisfied with young technicians. However, some took the electric motor factory “the Seagull” as a basis, create a much more powerful and reliable engines. These were installed at some highway models with which the athletes were in competition at the USSR Cup this year in the Latvian city of Valmiera.
From the serial of the motor is used only the rotor. Housing — aluminum Cup from color film “Orvault”. It is cut a Central hole for the bronze bushing and four groove under the yoke of the stator.
The yoke arch of a soft steel strip with a thickness of about 2 mm and a width equal to the length of the magnet. Incidentally, the magnet for the motor from the door latch (with sizes close to the size of a regular magnet, “zasolochny” several times stronger).
The back wall is cut out of the PCB or fiberglass. On its surface are attached to the brush holders, bended sheet metal, and springs. Note that the hole in a graphite brush made of a Central core dry battery, must be such that the brush inserted into his tight. The brush holders probailout and fixed on the rear wall.
In the Central hole of the rear wall as well as into the hole the front of the engine, pressed the bronze bushing. Fixation of the rear wall with three screws M2. Please note that permanently fix the it is necessary only after will be found the most optimal position — it is chosen according to the maximal power developed at the motor shaft.
Finally tweaked the engine is assembled on epoxy glue. Don’t forget to neverlet openings for cooling the armature windings. If the operating mode it is assumed tense, set on the motor shaft tin the impeller and secure it by soldering.
Here, perhaps, and all. The new engine will serve you for a long time and is unlikely to fail.