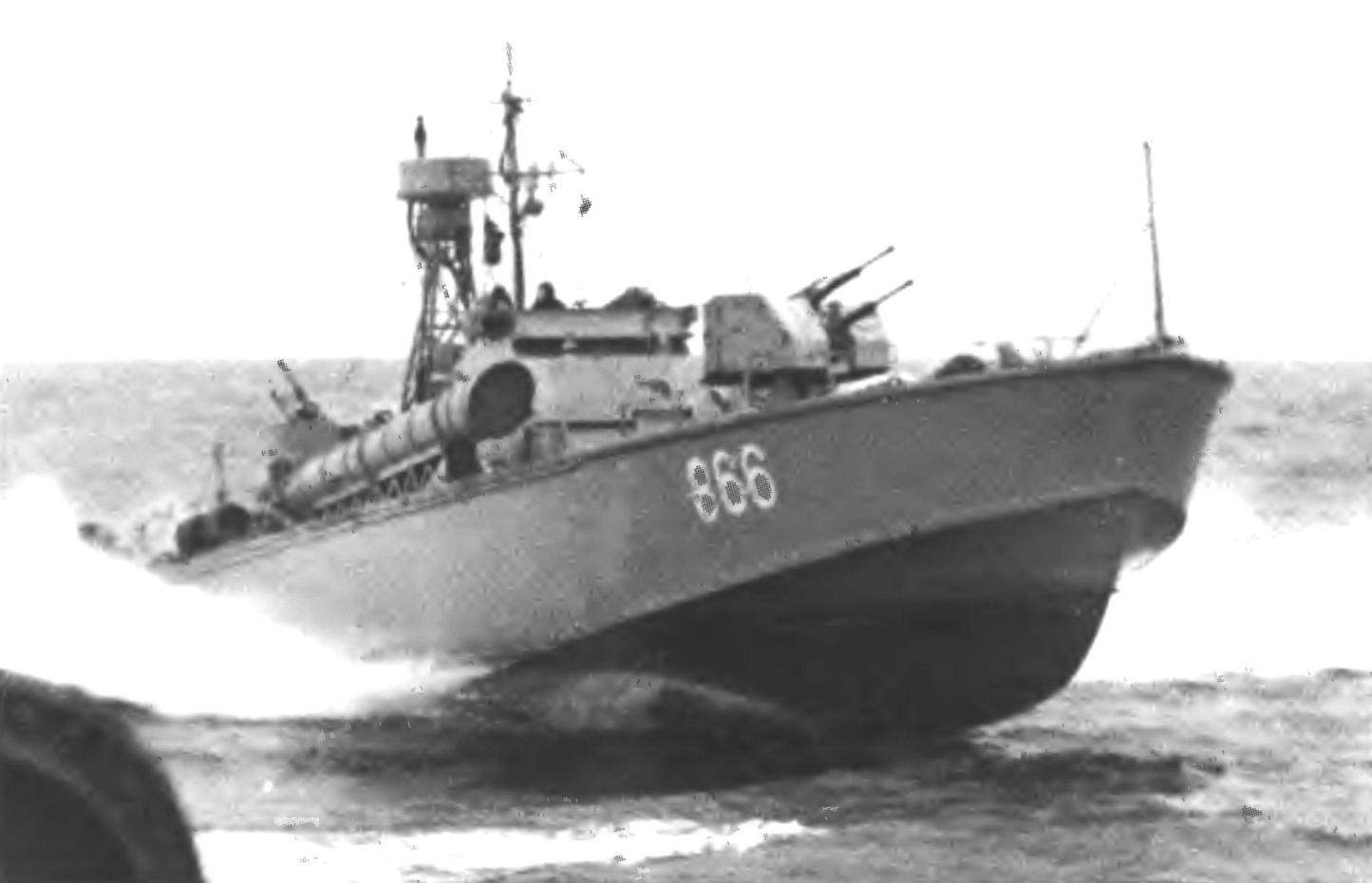 (The end. Beginning at No. 9 in’05). In may 1953, in connection with the liquidation of the 4th special Department (former MGB, and now the Ministry of internal Affairs of the USSR), OKB-5 was closed, and its civilian employees became part of the SKB-5 for the design of long-range boats was established on 22 October 1949 at plant No. 5 Minsudprom of the USSR. Here they continued further development of the boat of the project 183, including in the directions laid down in the OKB-5 MGB.

A large torpedo boat of the project 183 in all of its tactical and technical characteristics and technological qualities were evaluated by national experts as very promising. However, in the beginning of serial production was an obvious need for further improvement: increase speed and gain weapons in order to match the requirements of the time. The first was dictated by the slight difference in speed with the main enemy in repelling torpedo attacks with destroyers; the second, a small number of torpedoes in a salvo. And artillery weapons fighting was inferior to the boats potential opponents, who had not only the 20-mm and 40-mm artillery systems.
Modernization potential developers of the boat, is allowed to increase its tactical and technical characteristics. One of the most interesting modifications of the boat of the project 183, made in OKB-5 with the purpose of increasing the maximum speed was the option of a combined power plant. As an accelerator to increase the maximum speed on the boat in addition to four diesels M-50Ф mounted gas turbine engine. By this time, had information on the work of foreign shipbuilders in this direction.
In 1946 — 1947, the British boat coastal defense MGB2009 one of three petrol engines with a capacity of 1250 HP replaced a gas turbine engine (GTE) with a capacity of 2500 HP, which allowed to increase the maximum speed of a boat with a displacement of 100 tons at 5 knots. Given the positive results of operation of the boats the British Admiralty took the decision on the construction of two patrol boats with a displacement of 150 tons with a combined power plant consisting of two diesel engines with a capacity of 2500 HP and two gas turbines with a capacity of 4000 HP Each engine running on your propeller. Maximum speed of the boats was 43 knots.
In 1948 the Ministry of aviation industry of the USSR held a competition for the development of a turboprop engine (HPT) with a capacity of 4000 HP for future aircraft. The competition was attended by design Bureau N.D.Kuznetsov and S. D. Kolosov. The engine, developed under the leadership of Kuznetsov, was brought before, and accepted for production, and theater Kolosova remained unclaimed. Then S. D. Kolosov suggested to use it as the accelerator on the prototype of the torpedo boat P. G. Hoinkes, failing to contact the chief designer and find out the parameters required customs Declaration, the terms of readiness and delivery.
Initiative S. D. Kolosov received the support of the Minister of the shipbuilding industry and the Vice-Chairman of the Council of Ministers of the USSR VA Malyshev. Due to his active support in August
1950 issued a decree of the USSR Council of Ministers about the carrying out of works on creation of the first Russian ship GTD by modification of turboprop aircraft structures]. The modified engine was given the index TRDV. In December 1950, P. G. Hoinkes approved the technical design of the boat combined installation, get the number 183Т. In April 1951 at plant No. 5 laid the prototype of a new boat with factory № 519. In the summer
1951 the year the engine passed official TRD 100-hour bench test on the engine factory No. 16 in Kazan and was accepted the interdepartmental Commission of the Navy, Minaviaprom and Minsudprom. Three prototypes of the engine with the factory №№ 5, 6 and 7 were sent for installation on the boat. 2 Sep 1951, it launched the accelerator TRDV No. 5.
2 Nov 1951 at check of reliability of TRD on fifty percent power for a speed of 40 knots and a strong vibration of the housing. The test was stopped and the engines returned to base. During the inspection TRDV found the destruction of the bearing of the turbine resulting in destruction of the coupling between the engine and gearbox and front engine mounts. The causes of the accident, according to experts, was a hard motor mount and the poor performance of the lubrication system To continue testing boat engine mounts supplied with shock absorbers and modified lubrication system. Adopted measures proved insufficient, and in August 1952 during testing, not after ten o’clock, broke down engine No. 7, with destruction similar to the previous case.
For finishing gas turbine drive support TRDV No. 6 fulfilled the hinge, replaced the coupling is more flexible, once again improved the lubrication system. Then modified the accelerator, the power plant successfully passed the bench tests, and on the boat was installed already advanced TRD NO. 7M, which in August 1953 and was completed the state testing program.
The state Commission noted that the engine design S. D. Kolosov is the first gas turbine engine in the Soviet Union, applied to the ships of the Navy. Among the criticisms, the Commission noted the insufficient strength of the hull of the boat; a limited ability to travel at a speed of 50 knots — only at sea, not above two points; poor living conditions of the crew, TRD high noise levels and increased fuel consumption. In its current form, the Commission recognized pilot boat No. 519 satisfying the tactical and technical requirements for a large torpedo boat and did not recommend it as a sample for serial construction.
The creators of torpedo boats shared the views of members of the state Commission, especially that the main purpose of the boat project 183Т they saw the obtaining of experimental data in developing a combined power plant with a fundamentally new type of engine. Therefore, along with the testing of the prototype boat No. 519 at OKB-5 was the design of advanced torpedo boats. When they were taken into account the results of the tests, developed new equipment. 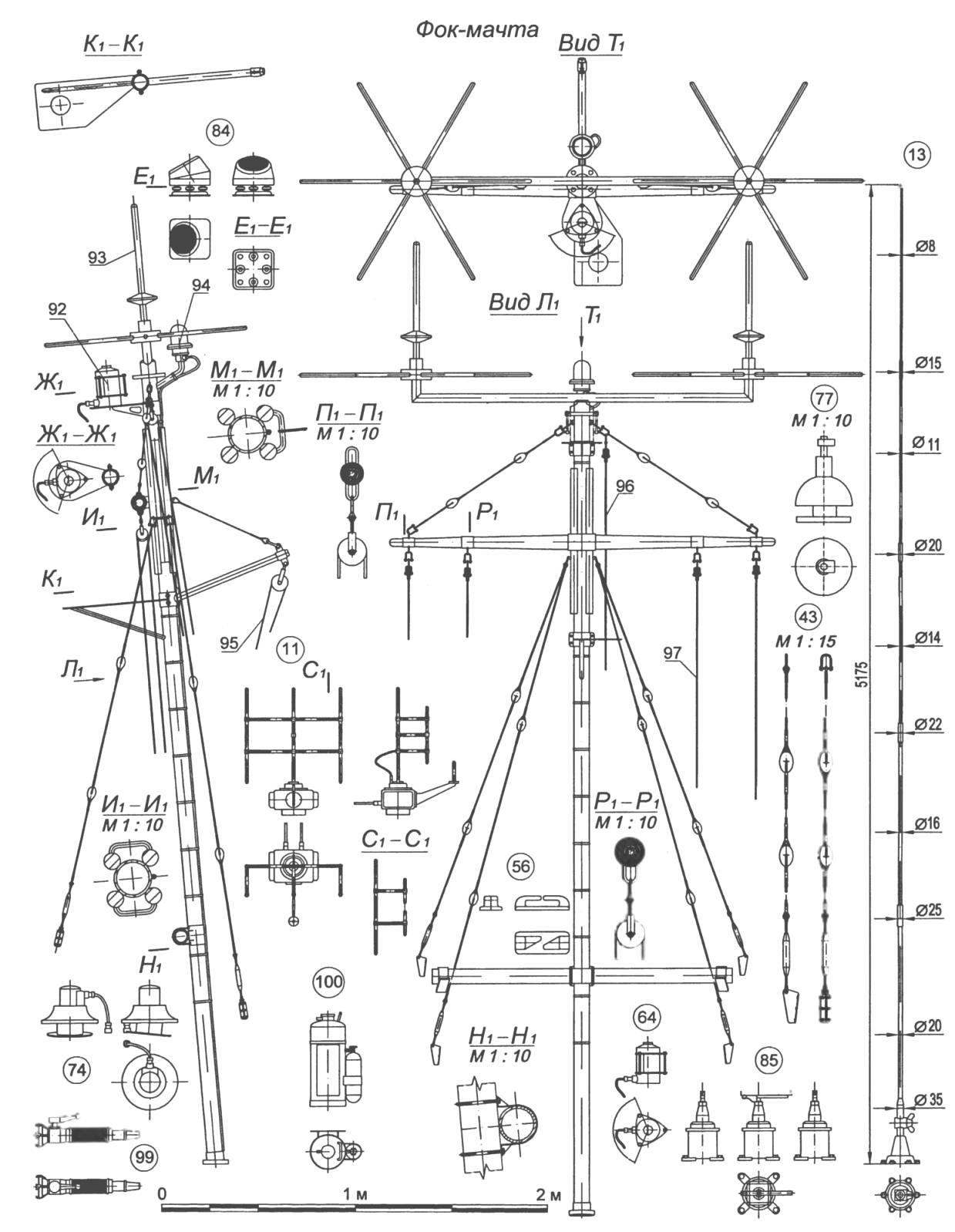 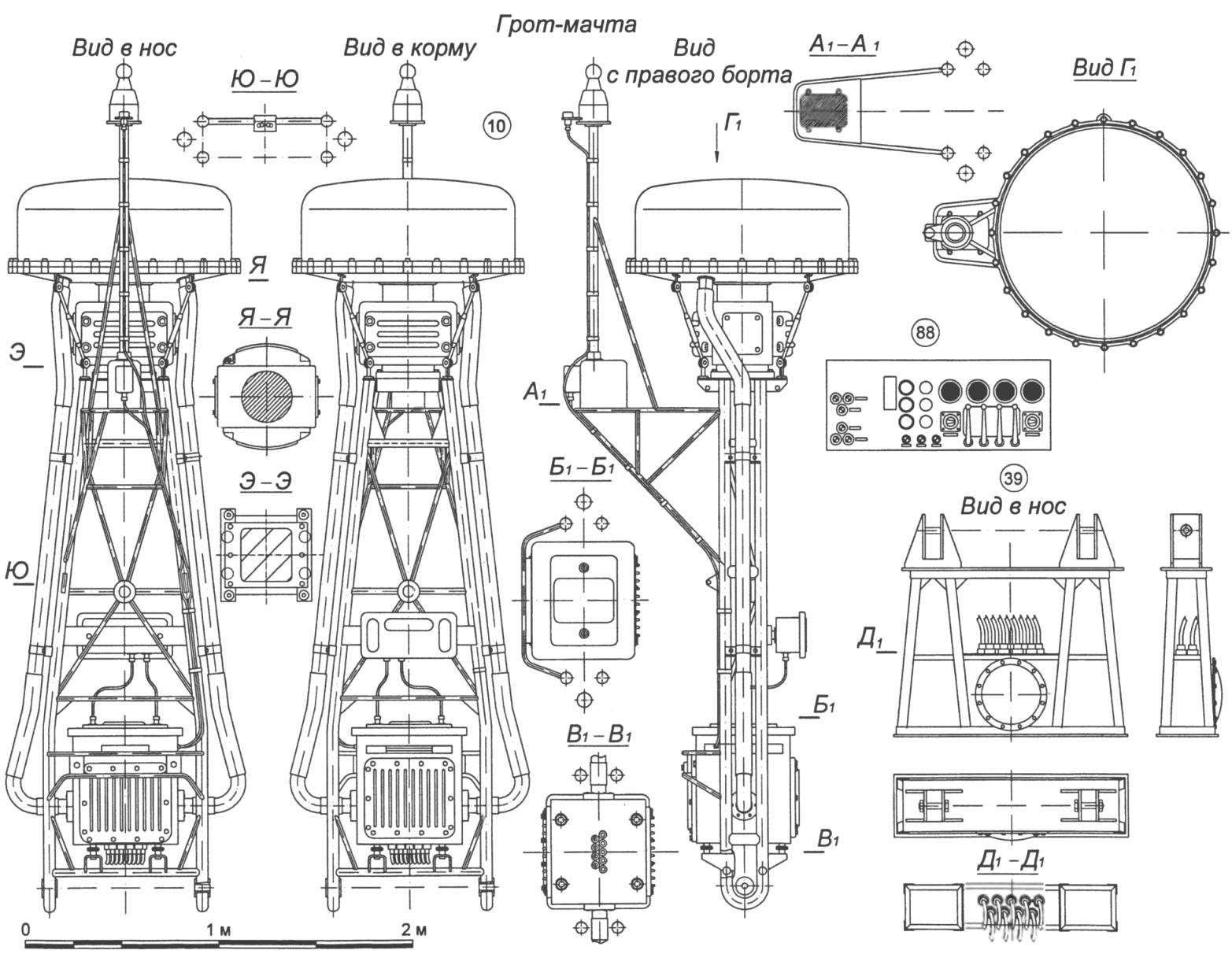 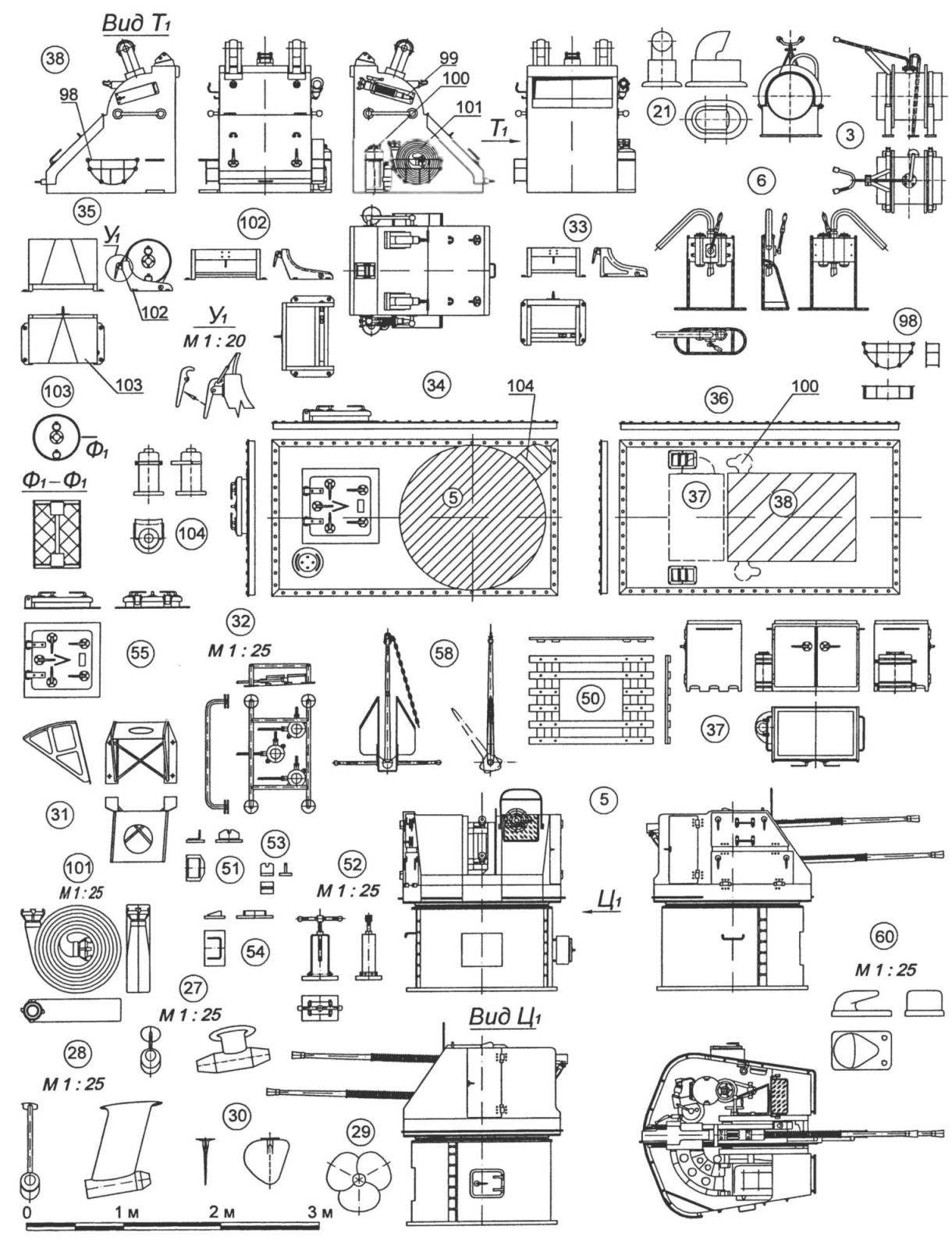