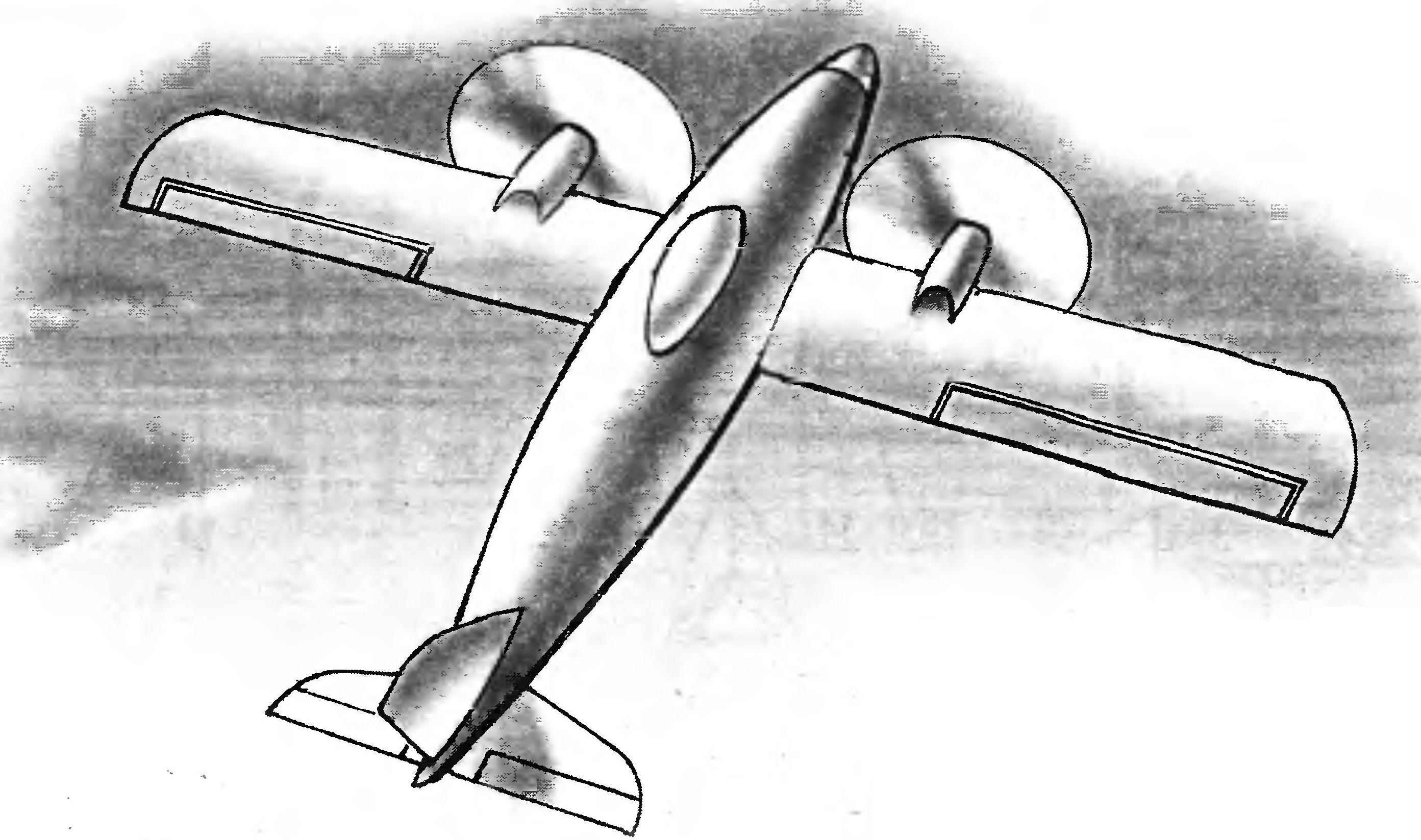 In this post we will talk about the design of foam electrics.

In recent years modelers have gained access to great material to create flying models. This is a finishing foam ceiling panel with dimensions of 500×500 mm with a thickness of from 3 to 6 mm. a Large part of such panels from the front side is decorated with various raised patterns, but the market fall and the leaves with a smooth surface — that they should be given preference. From these panels, you can produce almost all the main parts of the model from the wing spars and ribs to of the fuselage frames and plating. By the way, if you could purchase a plate of 6 mm thickness, it is easy to do a 3-mm plate, spreading the workpiece on two 3-mm with a glow current of nichrome wire.

It should be remembered that the strength and modulus of elasticity of the foam is not too large, so the most critical (power) details should be enhanced. For the wing ribs and fuselage formers to paper drawing paper (Whatman) or a thin fiberglass using glue “Titan”, designed for mounting the ceiling panels to the ceiling. With its help you can also stitch the foam parts (both overlapping and butt), and the seam thus obtained is colorless and its high strength and elasticity — not lower than the foam.

In the manufacture of foam such power of model elements, such as wing spars, they can be used to enhance manorastroman strands of glass or carbon fiber. By the way, the modelers were able to detect quite a suitable replacement for this material in the cords, which are sold in hardware stores as a clothesline for drying clothes. This “rope” consists of a prisoner in a vinyl shell heavy-duty harness threads. To help strengthen them, for example, wing spars or ribs, the threads should reformulate with glue “Titan” to the upper and lower surfaces of these parts. Well, to increase the stiffness of the wing in bending and in torsion, it makes sense to stick on the bottom of the foam consoles two such strings, placing them diagonally. 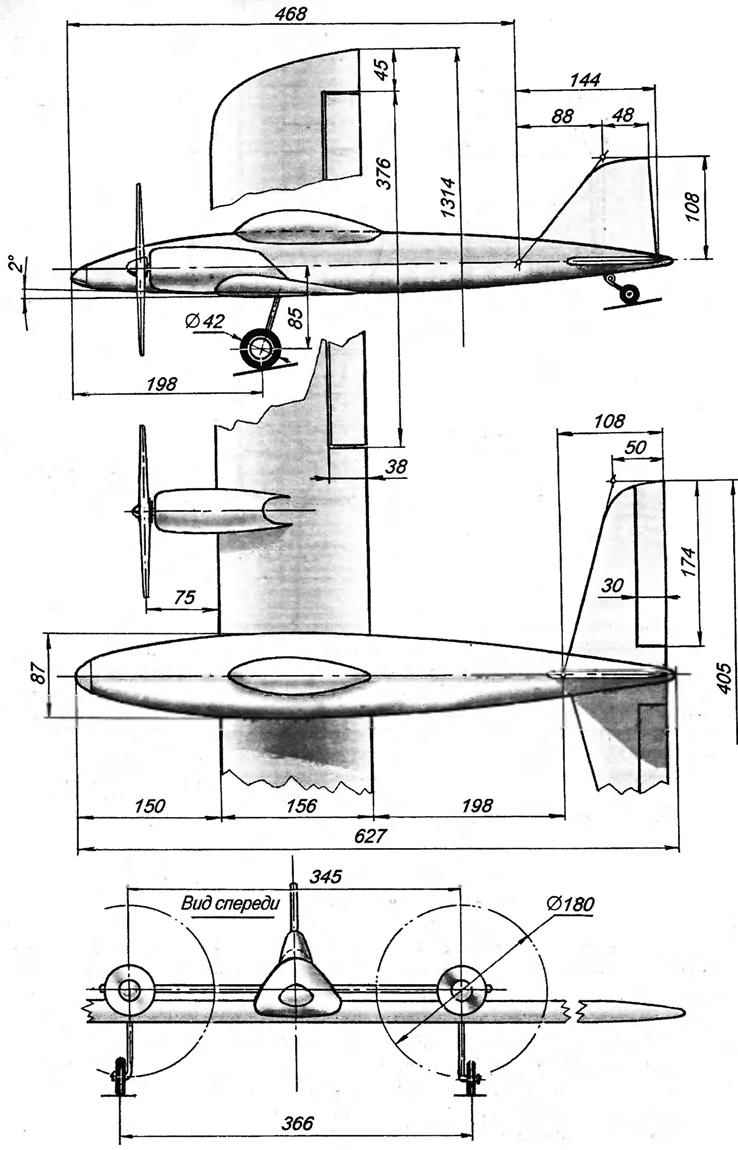 Getting to design the foam models should take into account that the foam can be curved using suitable metal items such as cutting steel pipes round or square cross-section. For example, in the manufacture of the upper panels of the wings bend in the front part thereof can be obtained, pushing the foam plate-solid billet to a tube of suitable diameter, heated over a gas burner. The degree of heating will need to be determined experimentally, using scraps of foam.

And the last one. For processing of foam you’ll need knives-cutters, sharpened like a razor blade, and a set of homemade nail files, made of plywood strips and glued them sandpapers of different grits.

RC model airplane that we want to offer our readers, is a twin-engine airplane had a fuselage almost triangular cross-section. It should be noted that with this aerodynamic configuration is significantly reduced interference between the wing and fuselage that reduces drag and therefore increases the lift coefficient. Besides the triangular fuselage has a greater torsional stiffness.

The model is designed for three-channel remote control equipment — roll, pitch and speed of the engines (“gas”). 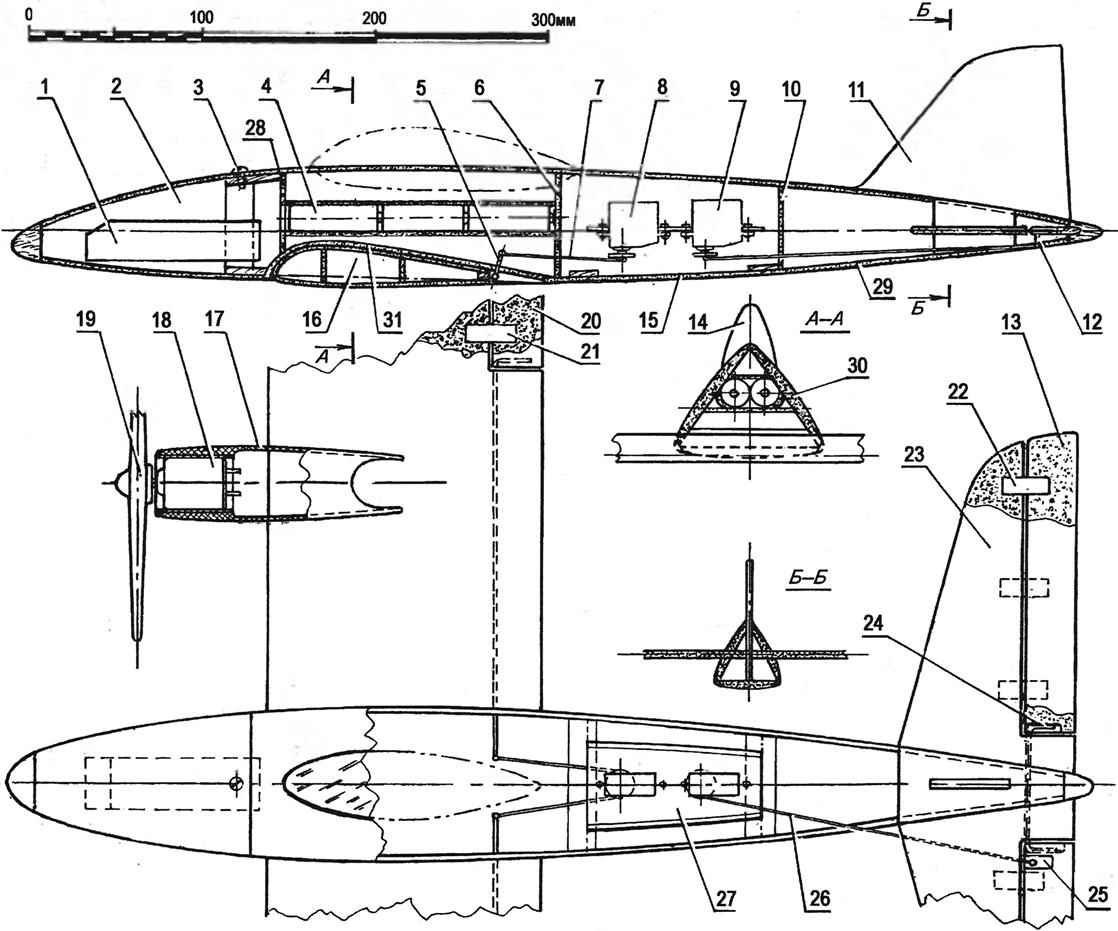 2—the detachable nose section of the fuselage;

7—drive rod of the Aileron;

9—servo drive of the Elevator;

14—the canopy of the pilot project;

21—loop linkage of the Aileron;

22—loop attachment of the Elevator;

25—strengthening of the Elevator in the zone of fastening the hog drive (Linden);

Manufacturer of models easier to start with the Assembly of the fuselage. First you need to portray the theoretical drawing of the fuselage on a sheet of paper in 1:1 scale, and then in accordance with its true dimensions, cut from 3mm plywood, with six to eight “temporary” frames — they need only in the manufacture of foam panels of the fuselage.

The technology of this process is quite simple — in the frames at the intersection of the axis of symmetry and construction of the horizontal fuselage drilled holes with a diameter of 10 mm, after which the frames are fixed (each with two nuts!) steel rod with thread M10. Thus, you will get a skeletal layout of the fuselage, which is from the drawing paper first made patterns of all three panels of the fuselage, and then, these patterns of foam plates 6 mm thick are cut and the panels.

6-hinge linkage of the Aileron;

Further in accordance with the contours of the fuselage from foam plastic plates, 3 mm thick, reinforced on both sides with a drawing paper, cut three “permanent” bulkhead, and lime wedges — front and rear lugs. After mutual adjustment of the elements of the joints promazyvaetsya glue “Titan” and in three to five minutes are grouped together. To record the details of the preferred sewing or stationery pins and rubber rings.

As can be seen from the drawing, in the rear part of the fuselage model, there is a hatch access to steering servos, and the front — detachable bow, which is a receiver of a remote control equipment model. Using the detachable nose part is the replacement battery of six batteries. As practice shows, the fuselage is the preferred integral applied to the wall, and then cut the hatch opening for mounting of the wing and separate the nose.

The wing is also entirely glued together from foam. The power set consists of two spars, trailing edge and split the twelve ribs. However, the power set should be considered as upper and lower wing panels.

The first step in the manufacture of the wing is a stocking parts — they are all cut from a three – or six-millimeter foam panels. In addition, each of the ribs is cut into three parts in accordance with the location of the spars and trailing edge. 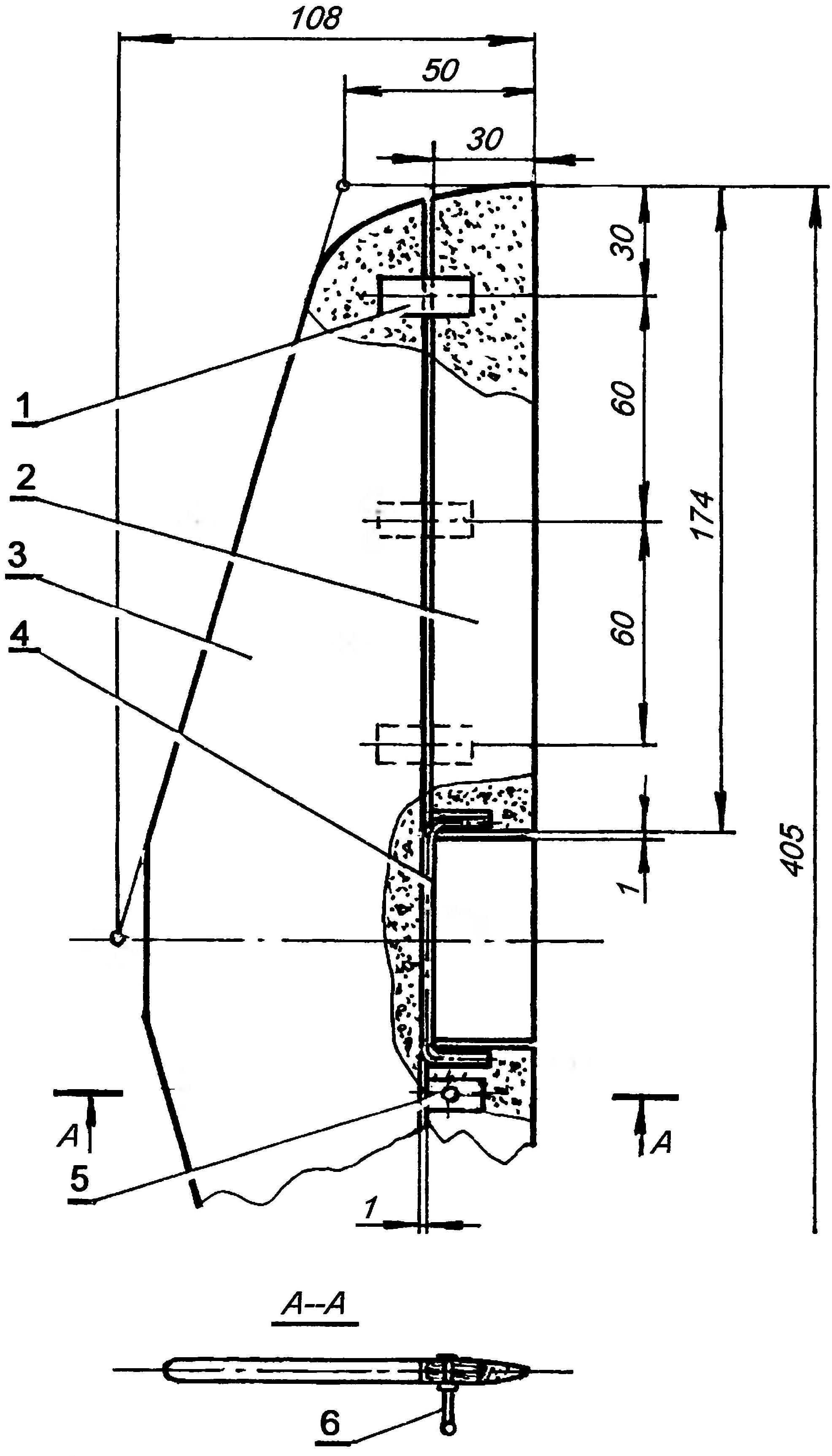 1 —loop linkage of the Elevator;

5—strengthening of the Elevator in the zone of fastening the hog drive (Linden);

6—horn of the Elevator drive.

Further, from the spars, trailing edge and ribs glued to the frame of the wing, then from a cellular foam panels are cut and bent top and bottom panels. Before final gluing of the wing install in the cavity with the lime insert mounting landing gear struts themselves bent from a steel wire of OVS with a diameter of 3 mm and preformula to the upper and lower surfaces of the spars and the trailing edge with glue “Titan” maslorastvorimye threads that increase the rigidity of these parts. 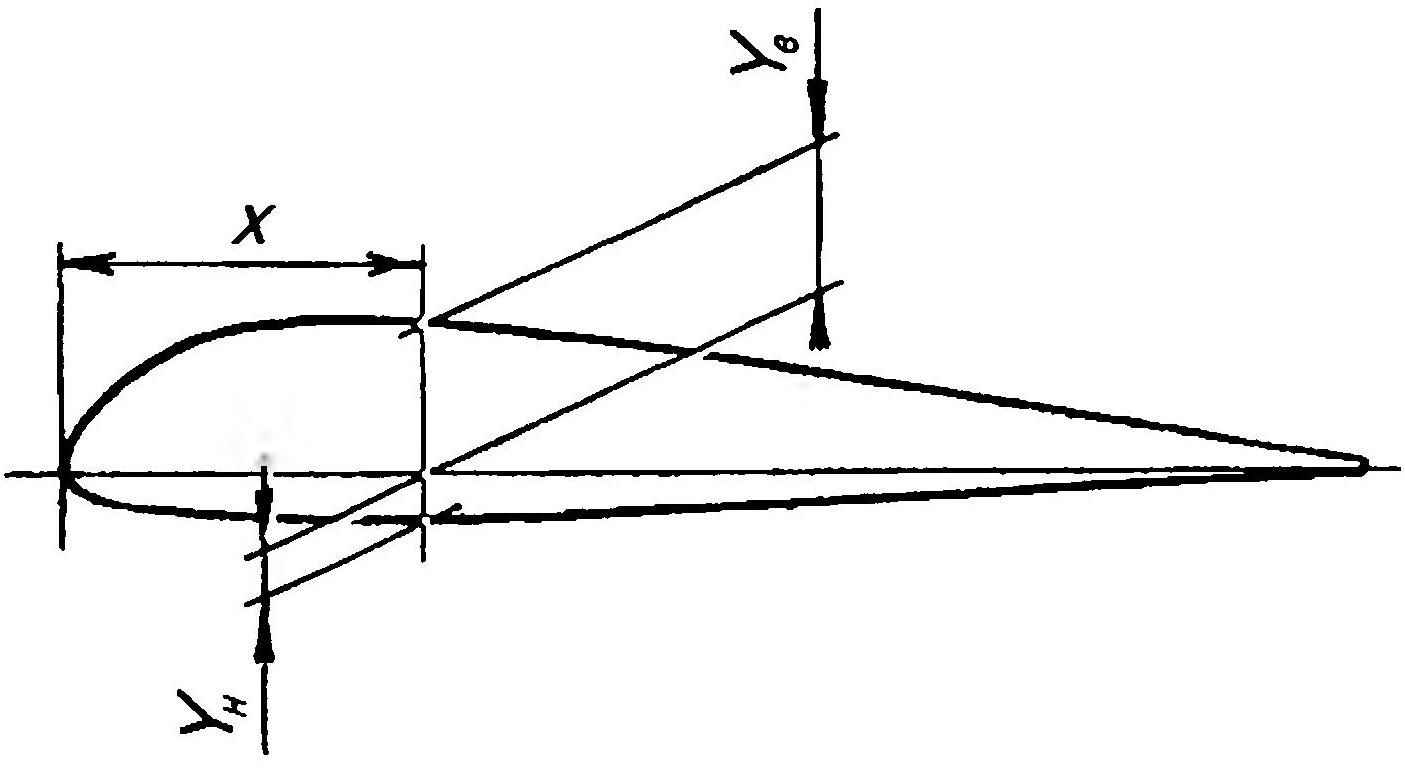 The ailerons are also made from foam. The drive is made with the help of torsion bars made from aluminum knitting needles. The linkage of the ailerons is carried out on synthetic tapes, in which the flower sellers pack up bouquets. The width of the loop depends on the stiffness of the ribbon-procurement — the bigger it is, the narrower must be the stripes. Fixing the hinges in the ailerons and the trailing edge is made with epoxy glue.

The nacelle vyklevyvajutsja of fiberglass and epoxy on the wooden disk. After curing of the resin workpiece is cut by a plane of symmetry, is removed from the discs and then re-glued “with epoxy”. After the treatment the skin of the nacelle is glued to the foam base, attached to the wing.

Before you start painting the model, you should verify the accuracy of alignment for the wing profile used in the elektroleta, its center of gravity should be located at a distance of 25 — 30 percent of the chord of the wing, counting from his sock. To sustain this option is recommended in the process of making the model multiple times to produce measurements indicative of the position of its center of gravity relative to the focus wing. When significant mismatches of focus and the center of gravity makes sense to move forward or backward, for example, the battery pack or, in extreme cases, move forward or back attachment point of the wing.

Table to build the profile of the wing.

The finished wing and fuselage vyshkurivaetsya and painted with acrylic (latex) paint. Cover the model with oil paints or nitrocellulose is not necessary — polystyrene, which is the basis of the foam, actively dissolves them.

Getting to the flights, be aware that places for their implementation not so much. As the airfield can be, for example, football field, meadow or even a field road, but they are suitable only for planting electroanalyt. For takeoff we need a more smooth runway is concrete or asphalt, but such a find is not easy. Therefore, to send the model in flight best using the “co-pilot” that is energetic cast will launch her into the air.

Some modelers prefer to start with a catapult, which is a flat Board fixed to the front part of a rubber cord. The cord is stretched and tied “in a bow” at the back of the plaque with twine, and the Board, the catapult installed on the ground with a small (about ten to fifteen degrees) slope. At the start of the pilot should be pulling the string while bow is undone, and a rubber cord, a wire hung through a hook at the front of the fuselage, sends the model in flight.

As for landing, then it is best to use a meadow with high grass — in this case, the model needs to withstand at a height of about half a meter above the grass to stall speed. Subsequent presyterian, as a rule, does not bring significant damage to the light model.