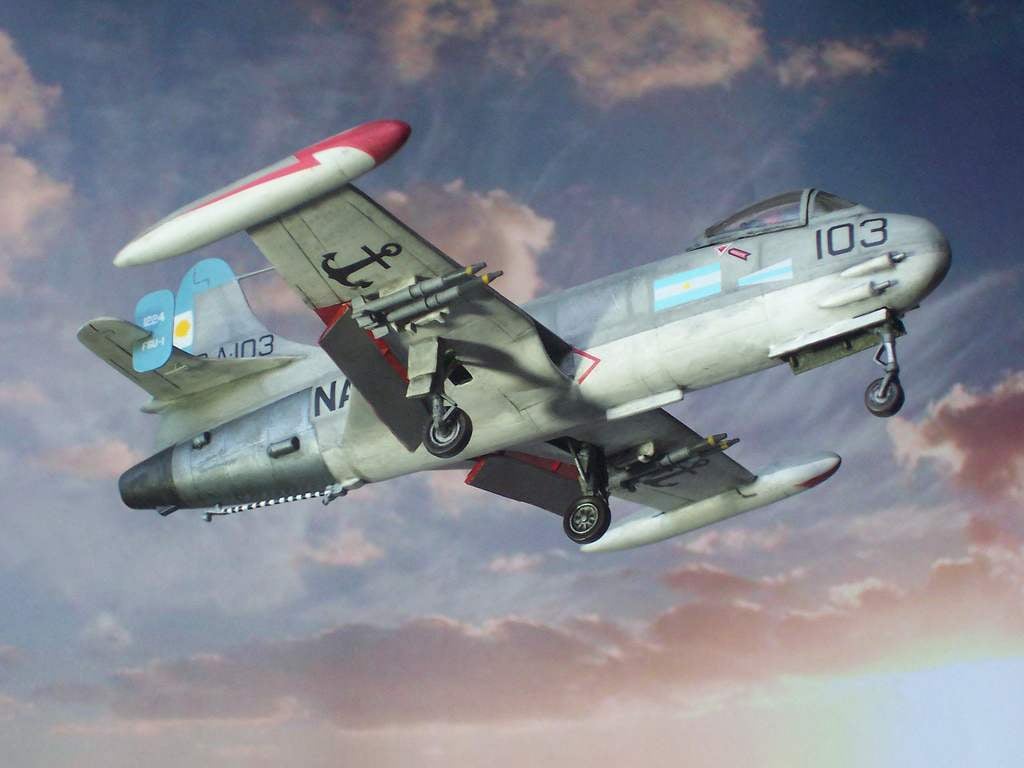 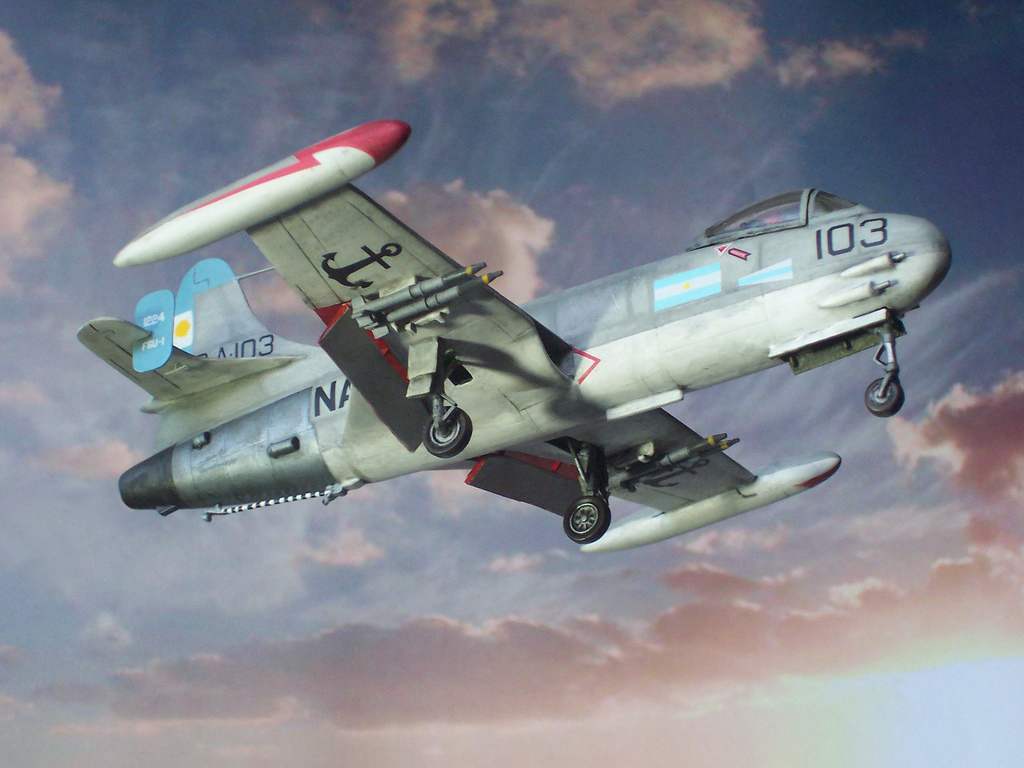 Fighter VOUGHT F6U PIRAT. The appearance at the end of the war, military jet aircraft in Germany and Japan forced the command of the naval forces of the United States to start a program to re-deck aircraft with new equipment. In 1944, the three leading aviation companies: McDonnel, Vought and North American was requested to develop preliminary designs of jet fighters to provide air defense of an aircraft carrier in a radius of five kilometers.

In addition to this difficult task, the aircraft was loaded urgent orders of the leadership of the U.S. Navy, which was slow to rearm aircraft fleet before the invasion of Japan, scheduled for 1945. Each of the firms in an effort to create the best aircraft used in our projects the new technical solutions the Most advanced of the three proposed was a project of the fighter V-340 firms Vought. The contract to build three prototypes of this aircraft and 65 production vehicles under the designation F6U was signed on 29 December 1944. Traditionally, companies use the names of their aircraft pirate vocabulary, the fighter assigned the proud name of PIRATE.
When you create a F6U most serious problem was the provision of minimum drag. With the purpose of lowering the midsection of the fuselage, the designers chose a turbojet engine with an axial compressor Mod 24C firm Westinghouse, which was developed in 1944 by order of the fleet. When the specialists Vought began preparations for the construction of the first sample, the Westinghouse company began the production of this turbojet with assigned resource 250 hours and a mass of 530 kg under the designation J34-WE-22. The nozzle went under the short tail boom, which is attached to the empennage classical scheme, and a small NACA air intakes of the laminar type was located under the root parts of the wing. The wing was designed straight, laminar, supercriti is helping 65-212 NACA profile with a relative thickness of 12%.
The most striking feature of the fighter PIRAT was used in the construction of new durable and lightweight material patented by Vought firm represented a kind of sandwich of two aluminum sheets between which was laid a layer of ultra-light wood — balsa. The layers are glued together and molded in a large autoclave. Composite material received the name metallit. Its strength and rigidity are given the opportunity to radically reduce the number of supporting aircraft frames and ribs, making the design almost monocoque.
Panels from metallit trimmed almost the entire surface of the airframe, and the panel fastened by rivets with countersunk heads. High precision manufacturing of these panels allowed us to minimise the gaps between the plates. Thus, after painting and polishing aircraft surprised even the experts with their clean aerodynamic shapes and looked as if it were cast integral of metal. In comparison with the plane XFJ-1 FURY, created by North American, metalicana design F6U gave the win to weight about a ton. 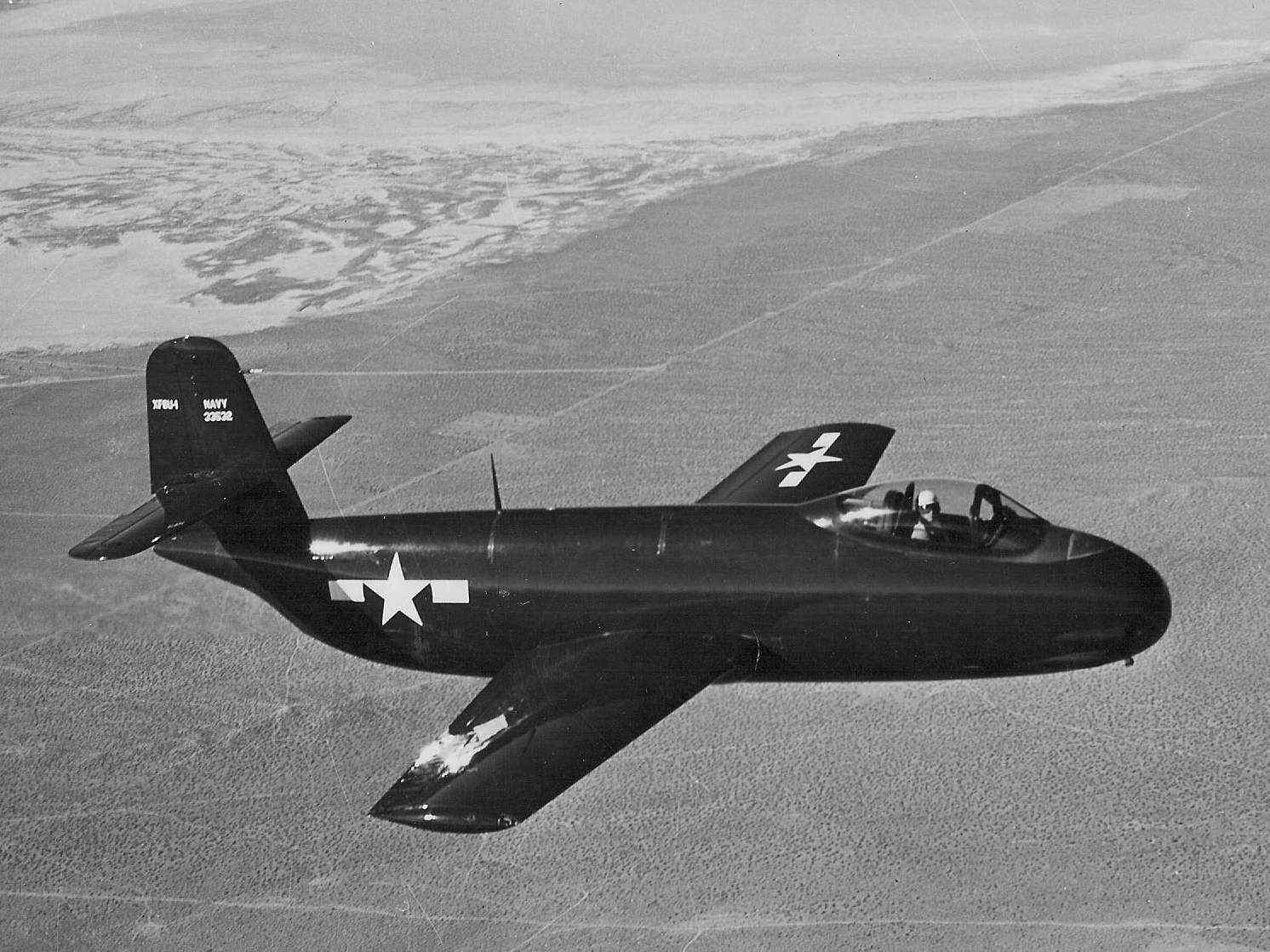 The first prototype consume gels Pirat XF6U-1 in flight
Short rounded nose part of the fighter F6U provides the pilot excellent visibility forward and down, which is very important when landing on the deck. First aircraft company Vought F6U had a tricycle landing gear with nose wheel.
In the design of machines, great attention was paid to reduce the efforts of the pilot attached to the controls. On the ailerons, set the internal aerodynamic compensation that does not have protrusions and do not spoil the flow pattern of the wing. Elevators equipped with a trim tab and a servo tab. The complex of these solutions helped to reduce the effort on the control handle up to 4.5 kgs.
Purge in a wind tunnel have confirmed the design characteristics, but at the time of research was not considered the behavior of the machine at transonic speeds and phenomena associated with the compressibility of air. The developers decided to do it the easy way, they put on the plane automatic air brake with hydraulic drive, which restricted the airspeed and did not allow the exit of the plane to unexplored regimes.
PIRAT was distinguished by a powerful built-in armament consists of four 20-mm guns with ammunition 150 rounds per gun located under the cockpit; the barrels of guns came out in the nose of the fuselage. Here at the bottom were the air intakes, the Probability of ingress of powder gases when firing was very high. This assumption was confirmed already in the first firing tests. However, to spend time addressing such a serious lack of steel. The leadership of the company wanted as soon as possible to lift the fighter into the air, and to finalize a design was possible and then, in preparation for serial production.
A more serious concern of designers was caused by the location of the engine nozzle construction below the horizontal plane, which could result in a change of pitch when you change thrust. To verify the behavior of the machine model was established F6U scale 1:7. The gas jet from the nozzle simulated six compressors, air nagnetic one connected to the hose model. The purge was carried out in a wind tunnel a low-speed Research Division of United Aircraft in Hartford. Aerodynamic experiments showed that in four different modes of the simulated flight, the nozzle does not create any moment on the pitch and his unusual (reganne) the location is left unchanged.
The first prototype XF6U-1 with serial number 33532 collected in the summer of 1946 at the plant of the company in Stratford (Connecticut). After ground testing the machine was dismantled, Packed in crates and transported by truck to the airbase Muroc to California and re-assembled. 2 Oct 1946, test pilot Boone Guyton raised a new fighter into the air. First flight almost ended in failure. The air at XF6U-1 PIRAT stopped the engine. Fortunately, the pilot managed to plan and make an emergency landing on a huge dry lake Rosamond, the surface of which was used in Moroka as a runway.
“Fault” in the engine was the new lubrication system with makarapa-piece, which was developed by the Westinghouse firm. 23 liters of oil poured into the oil tank of the aircraft, was used in less than an hour — about the time it took to gazovka. trial run and take-off. When the oil ran out, the engine just clicked. To replace the turbojet engine turned out to be nothing, and the flight tests had to be interrupted.
The next flight was only 45 days. After the third flight at the airbase Murok it started pouring rain. If you recall, that base was in the Mojave desert, 160 km northeast of Los Angeles, you can imagine how rare this phenomenon for those places. The hard surface of the dry lake bed turned to mud. The flights were discontinued.
During downtime the team of testers studied the materials of objective control In 1946 these materials were mined in a primitive photographic, representing a a box with a set of aircraft instruments, lamp lighting and the shot-method. The last continuously filmed evidence the shooter devices. Installed in the data logger devices dubbed signposts, standing in the cockpit: air speed, rate of climb. pressure altitude, air temperature, fuel consumption and other important parameters of the TRD.
Unfortunately, the analysis of these data had little to say about the flying qualities of the machine. Angular velocity, position, linear acceleration, overloading and other important parameters were not recorded. Even the determination of the number M of the flight had to spend a lot of time in searching for the relationship of airspeed to the speed of sound in these conditions using the slide rule.
Few weeks the bottom of the lake dried up and the flights resumed. In the tenth flight, when the plane was flying at extreme speeds, corresponding to the number M = 0.8, and the pilot felt a sharp blow on the foot controls. Information obtained in subsequent sorties with velocities lying in the range from M = 0.76 to M = 0,8, is not possible to establish a pattern between the appearance of bumps and speed of flight Convened a Council aerodynamicists came to the unanimous view that “fault” in hitting the rudders of local shocks arising at the junction of the stabilizer and fin. It was just those phenomena of compressibility, which was not considered during the design of the fighter. 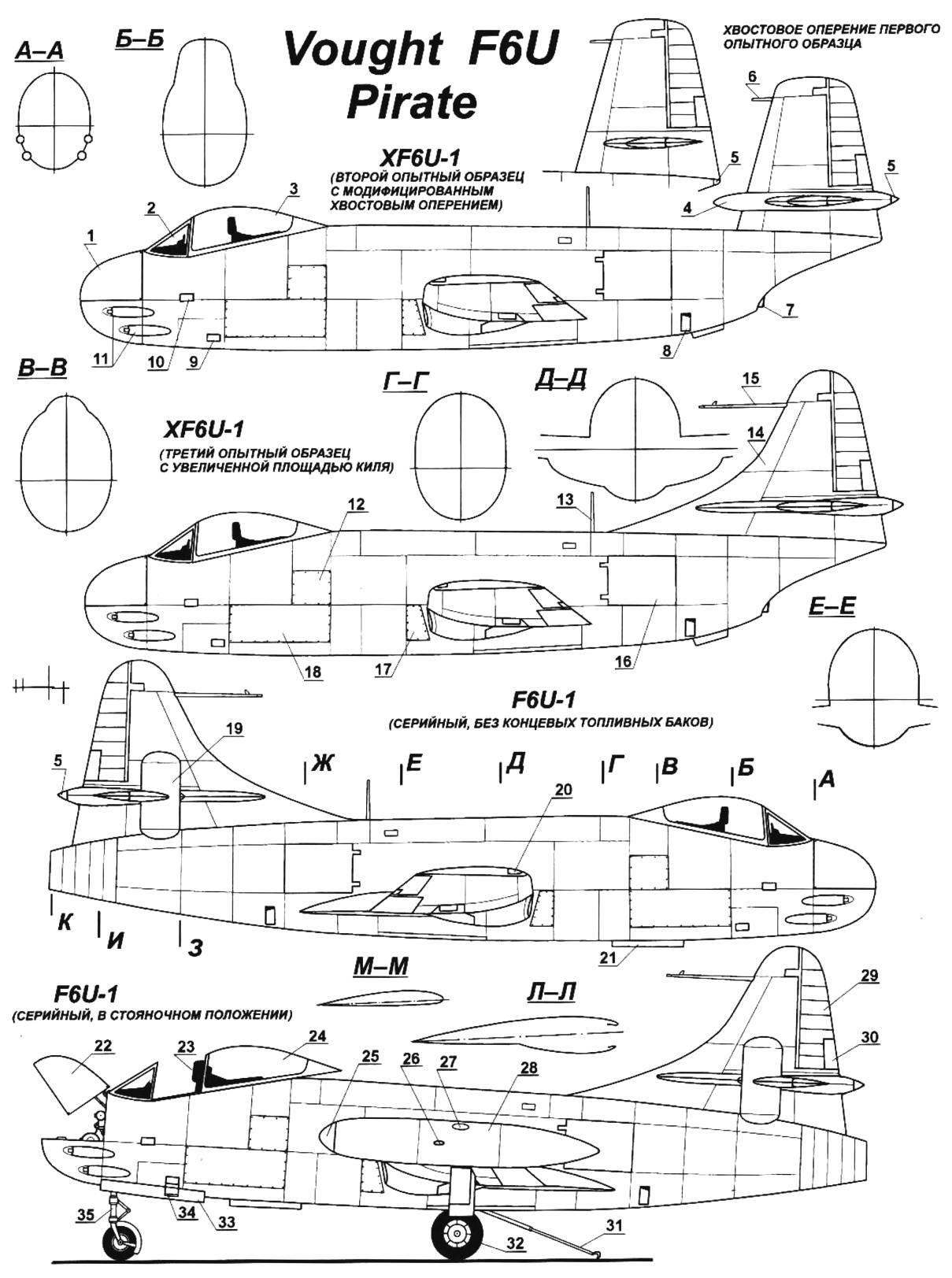 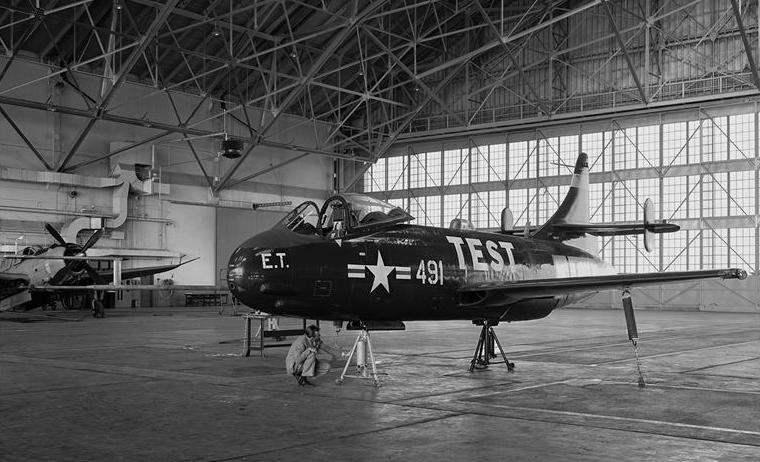 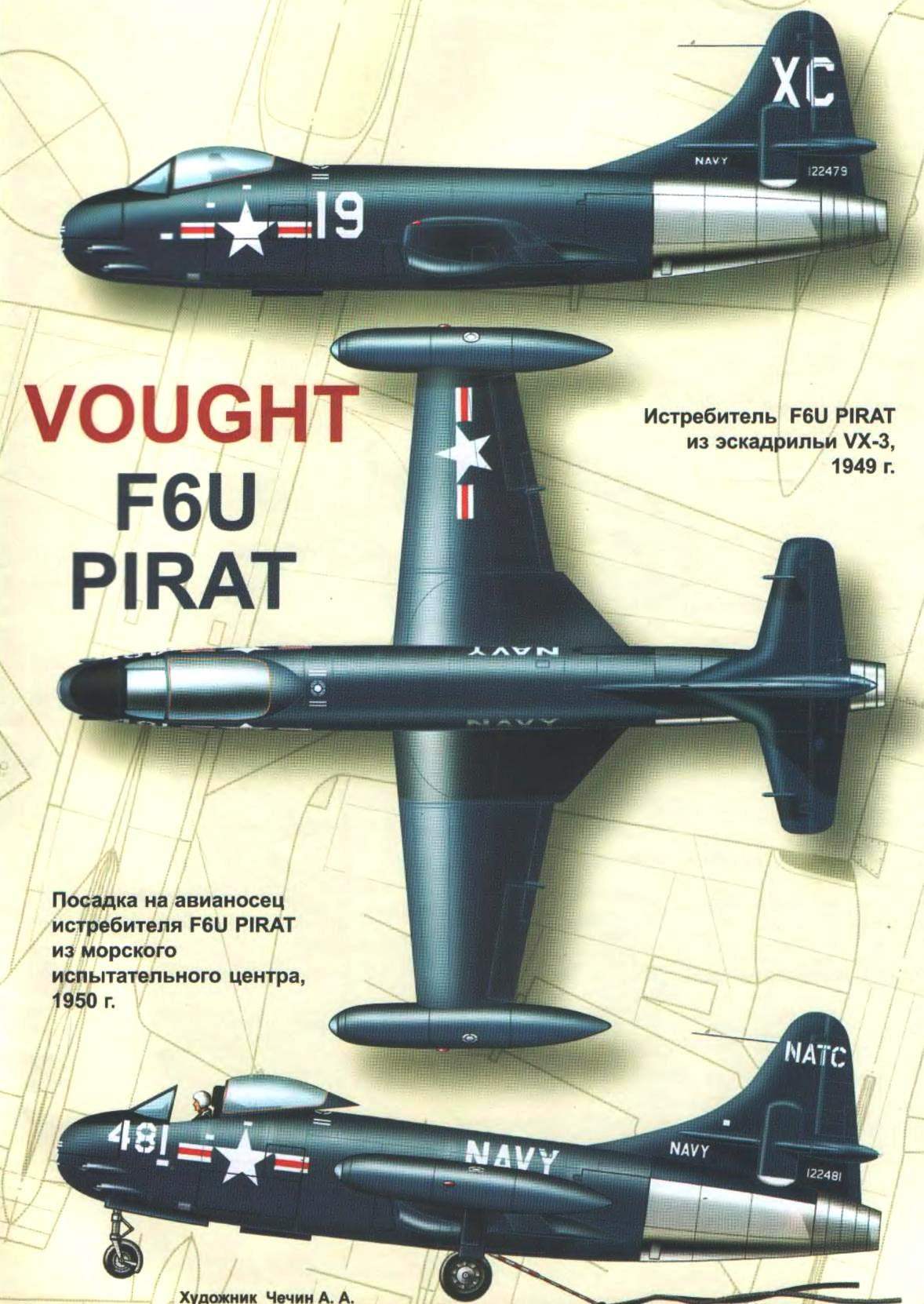 Landing gear is tricycle, with steerable nose wheel. After landing on the deck of an aircraft carrier and the front leg could be shortened. Thus the tail part of the plane rose up. In this position the pilot could steer the deck using turbojet engines, not fearing for the lives of technicians, standing behind the aircraft on the deck.
On production aircraft F6U-1 had an engine Westinghouse J34-WE-30A has a static thrust of 1360 kgs. When you turn on the afterburner thrust increased up to 1900 kgs. When in the Western literature indicate engine thrust, usually lead, stand characteristics; the engine installed on the aircraft, the thrust will be less. For F6U this reduction in thrust was as much as 12 percent. The J34 engine was an 11-stage axial compressor, annular combustor and two-stage turbine. The engine intakes were at the lower surface of the wing roots.
The aircraft was equipped with air brakes with hydraulic drive, which is automatically produced when the critical flight speed, corresponding to the number M = 0,8.
F6U armament consisted of four 20-mm guns M-3 with ammunition 150 rounds per gun. The radio equipment consisted of a radio station, radiolucent and used for the first time in the United States system of identification “friend or foe” ARCH-1 IIF.
Flight-the statement of characteristics of the aircraft F6U-1 PIRAT
Length of aircraft, m…………………………….11,48
Wing span, m……………………………….10,1*
Height, m………………………………………….3,95
The wing area. m:……………………………18,91
Empty weight, kg……………………………….3320
Maximum takeoff weight…………..5942**
The maximum flight speed, km/h….959***
Landing speed, km/h…………………158
The rate of climb, m/s………………………43
Practical ceiling, m…………………….14 110
The maximum flight range, km…..1851
*Excluding the fuel tanks. **With full ammo, a pilot, a fuel in the internal and external tanks ***included With afterburner.
N. Food reserve was, A. CHECHIN