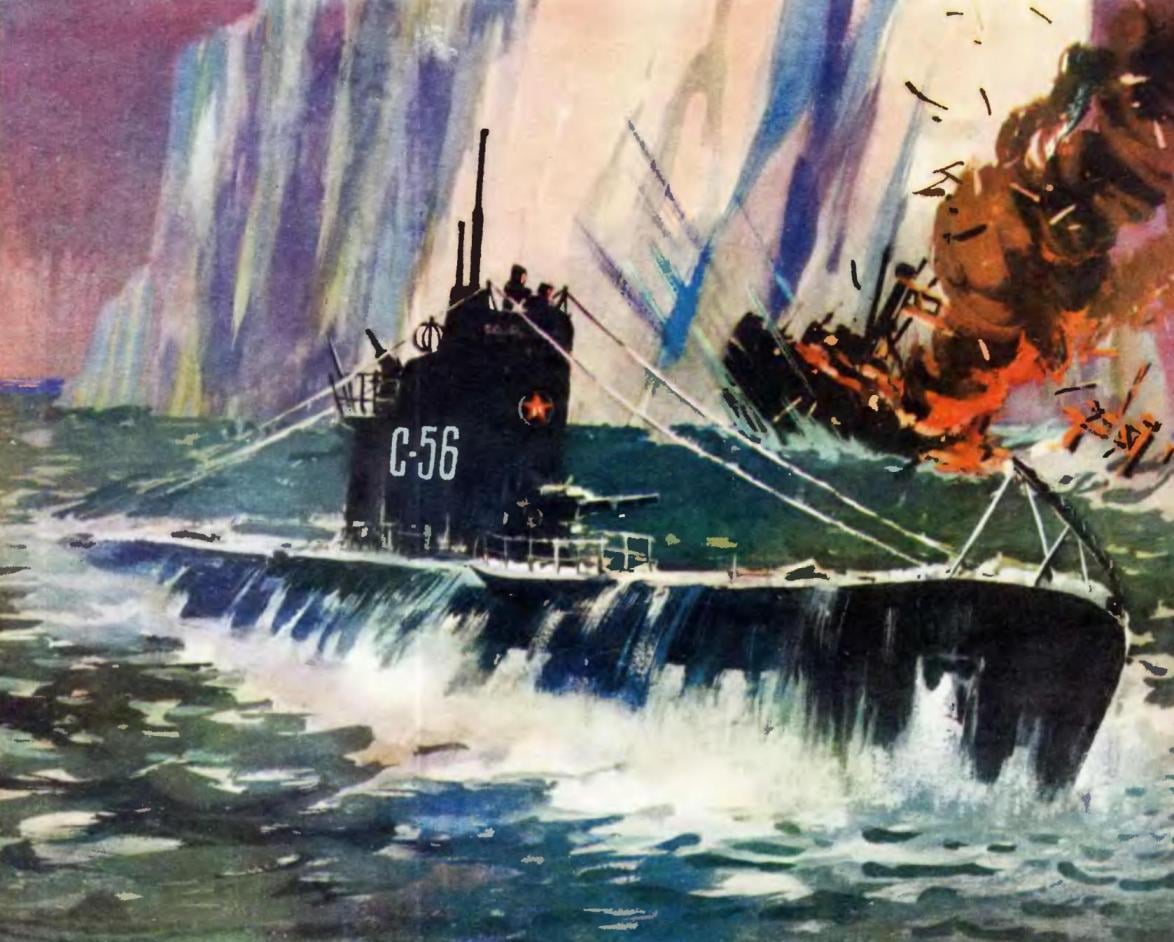 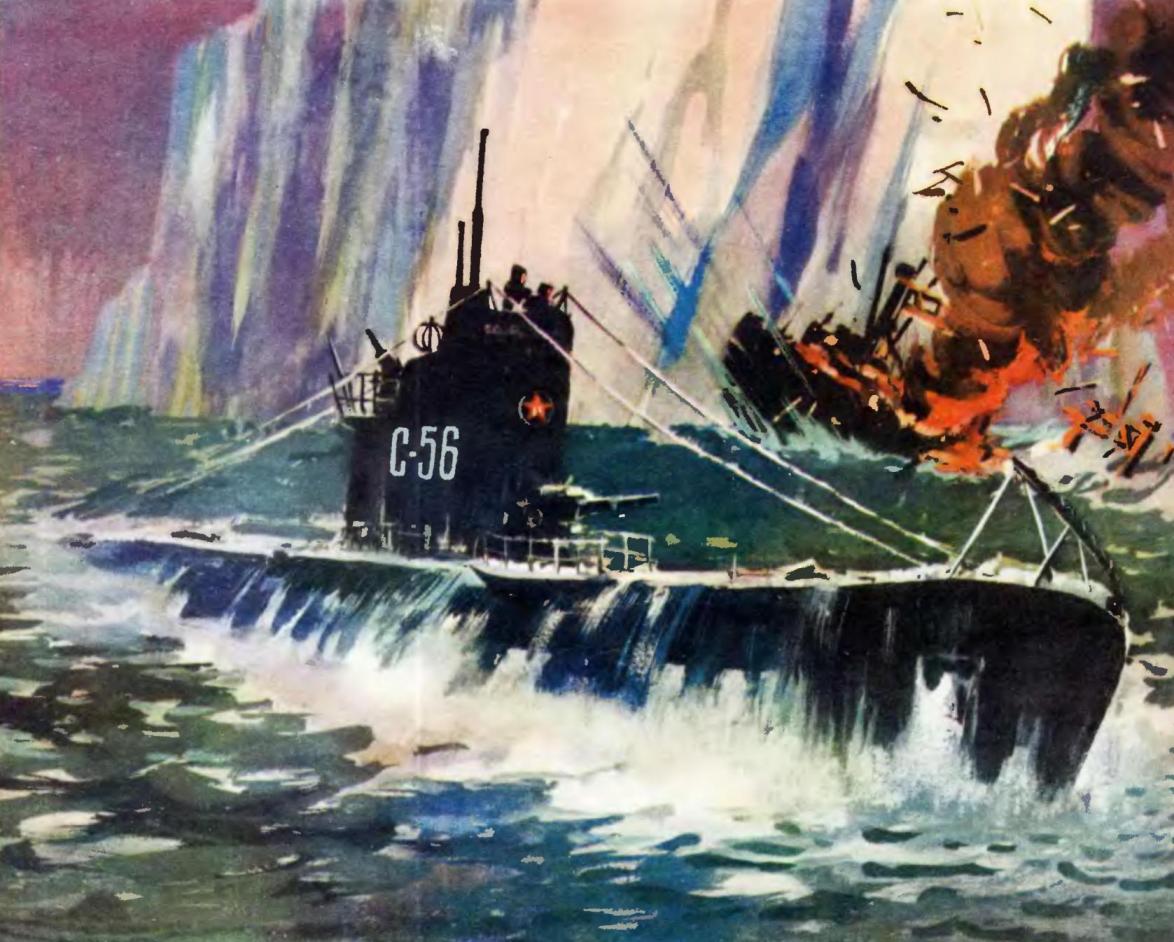 “Vladivostok, 6 (Corr. “Truth” Yury Makeev). On Ship quay of the regional center established on the pedestal of the legendary submarine s-56…”
The newspaper “Pravda” of 7/XII 1972
Revealing this issue, the reader will not find in it the familiar headings of “Sea collection “M-K”, which is a Hero of the Soviet Union Vice Admiral Grigory Ivanovich Shchedrin.
Today, in honor of the Victory Day, periostium one of the glorious military pages in the history of our fleet and will tell of the heroism of the crew of the submarine s-56, which during the great Patriotic war, commanded a 27-year-old captain-Lieutenant Grigory Shchedrin.
Descent ship on the water have long been consecrated by many rites and traditions. The birth of “s-56” they are not marked: almost ready submarine, collected in a short time at a factory, loaded on a railway platform and sent to the far East. Here on the deck “Eski” has raised its first commander, 27-year-old captain-Lieutenant Grigory Shchedrin. Here was completed the team. 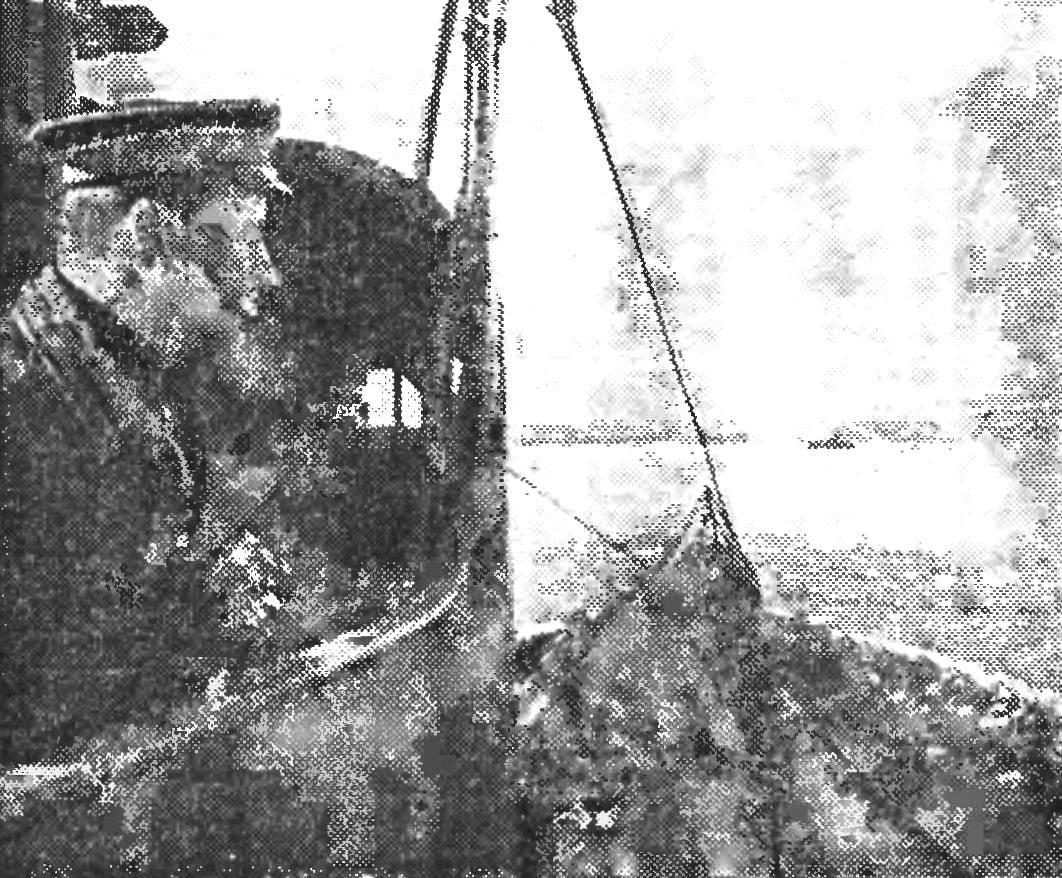 G. I. Shchedrin in the control room of the submarine s-56. 1943.
In the autumn of 1941, “s-56” out to sea — the representatives of the Navy and shipbuilders have begun to test. They were successful and 31 October 1941, under the sounds of “the Internationale” by “s-56” was raised by the naval flag of the USSR. The new submarine was put into operation.
A year has passed. The crew mastered the boat, checked the weapon, practiced educational objectives. The exercises were held in the conditions approached to fighting, from December 1941, after Japan attacked pearl Harbor, the Pacific ocean has also become a theater of military operations.
But the s-56 was not destined to take part in them. By order of the State Committee of defense, decided to strengthen the current fleet and the new ships, several submarines, including the s-56 had to move from Vladivostok in the Barents sea South through the Pacific, Atlantic and part of Arctic ocean.
Deadlines have hampered the preparation of the ships. But the crews, working 16-18 hours a day, they completed the planned program, and 6 October 1942, the boats left the Golden horn.
In the first days it became clear that the campaign will be extremely heavy. Already in the sea of Japan “-56” nearly collided with a Japanese ship darkened, and in the Okhotsk — caught in a severe storm. Pyatnadcatiletnie waves like mountains, fell upon the ship. Water got in the ammunition cellar, took out some appliances that interfere with the function of the motor shaft. Only the selfless actions of warrant officer and Elina Rybakova, chief petty officer, provided a “C-56” an independent course and rescued the boat from a difficult situation. Correcting damage in Petropavlovsk-Kamchatsky, s-56 continued on his way. During the transition from the American base of Dutch Harbor in the Strait Akutan, almost had a new problem: some heavy object slammed into the hull around the Central post. The depth at this location was 100 m, so the collision with an underwater rock was excluded. Then what? Later, in the English port of Rosyth, “s-56” put in Doc. When viewed in the bottom found a hole and shards of metal. Torpedo? But the German submarines in the area of the Strait Akutan was not, the Americans were our allies. A strange incident remained a mystery.
From San Francisco “-56” went to the Panama canal. Now Soviet sailors were in the tropics, and this created some inconveniences: outboard water temperature reached 35°, warming the interior of boats up to 50°. There is a risk of spontaneous combustion and explosion of ammunition. And it showed the dedication and resourcefulness of the crew. Was limited to the results of cold water to the team, most of it contributed to the cooling of the battle of the cellar. 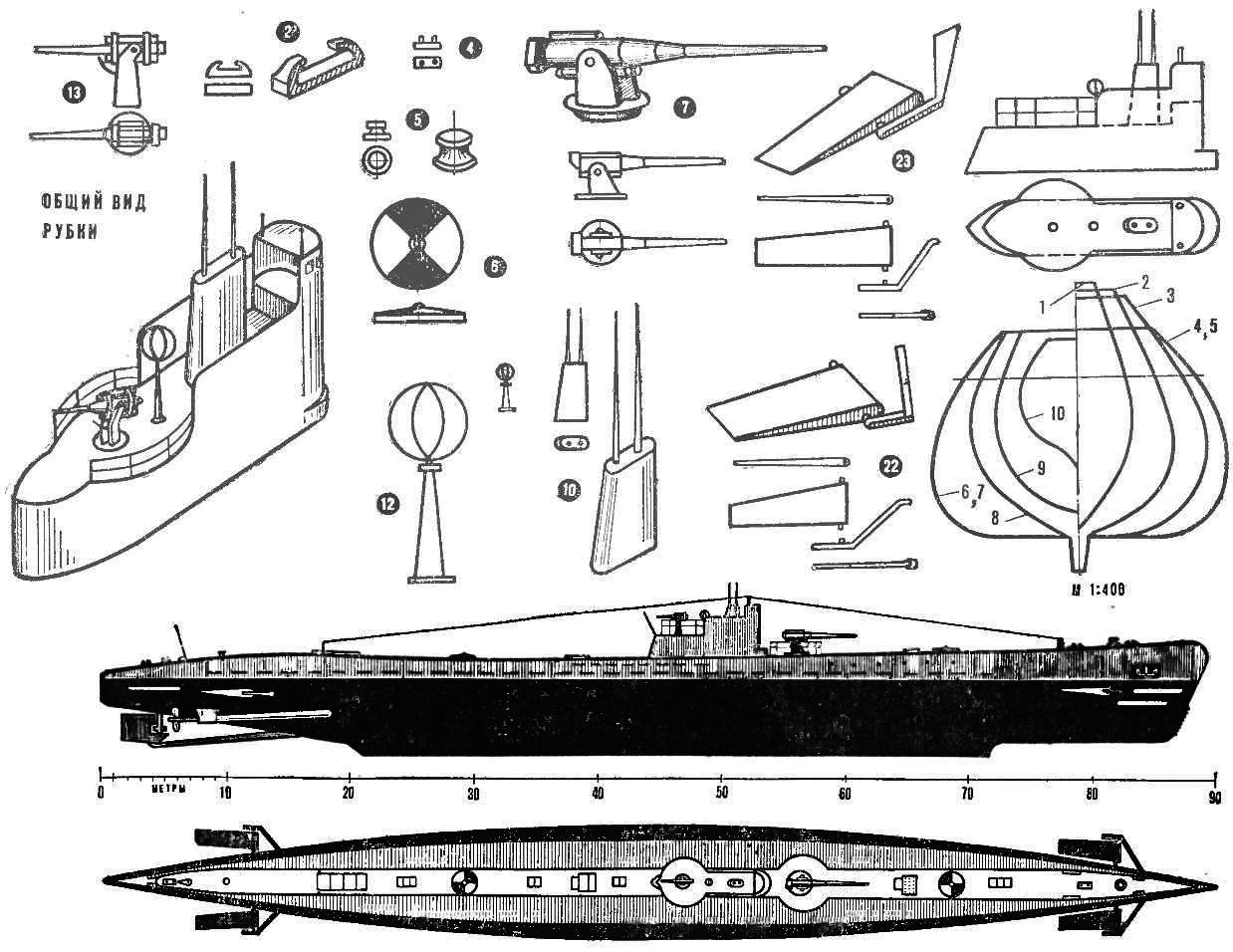 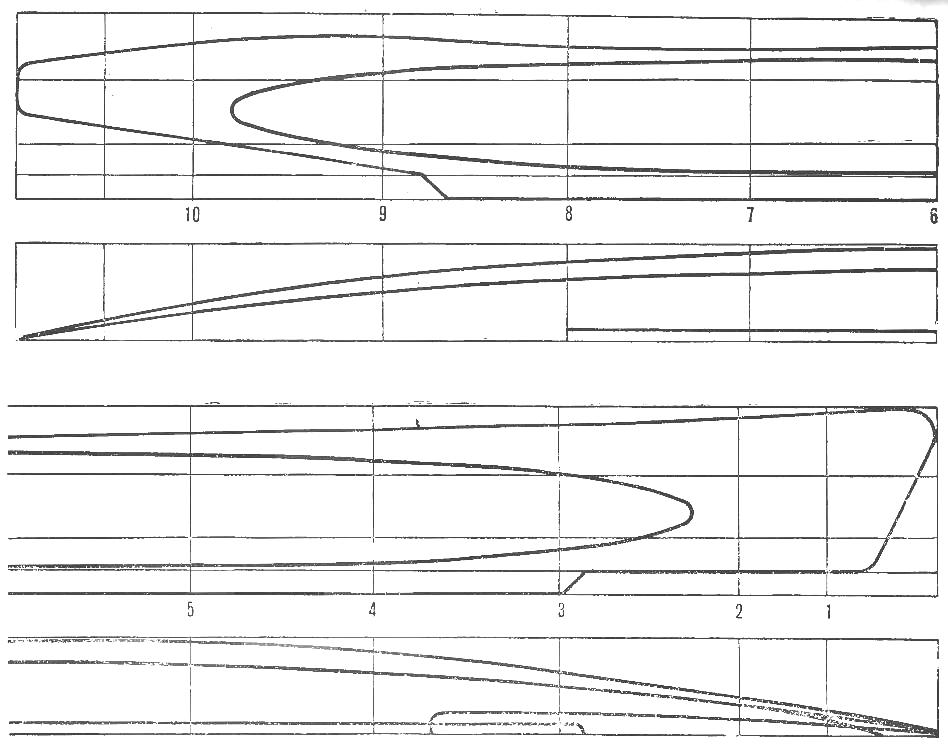 November 18 “-56” has already been directly attacked, but the signalman noticed the trail of a torpedo, hurtling into the boards. Team, the sharp turn, and the torpedo passed within 50 m from the boat. Passing through the Panama canal, the s-56 was in the Caribbean. Here the boats were separated, and s-56 alone went first to Canada and then across the Atlantic to England. And in this passage the crew of the boat showed excellent training. On the last day of 1942, when the boat was at a depth of 65 m, on her way appeared to be someone submerged vessel. The commander of s-56 had to use all his skills to free the boat from unexpected traps.
28 Feb 1943 the boat came to the Arctic, leaving behind almost 17 thousand miles. And immediately began military campaigns. A boat patrolling off the Norwegian coast were planted by scouts, drowned ships and transports of the enemy. In one of the campaigns of G. I. Shchedrin found a German convoy of five transports, guarded by destroyers and three patrol boats. Having made a skilful manoeuvre, the commander of “s-56” brought the boat into position for the volley. Push the torpedo went in the goal.
For a moment, raising his periscope, the commander of s-56 saw broken in half, sinking the transport.
Other hike — and again success. Increasing the account of the combat divers. In storm and fog, night and day “-56” is in combat positions. Red stars — the signs of military successes adorn the cockpit of the underwater vehicle. Soon the s-56 is becoming a red banner. And finally the highest award — guards naval flag — crowns the case of the famous crew. Hero of the Soviet Union becomes the commander “With-56” captain second rank G. I. Shchedrin.

Submarine “s-56”:
1 — ceteras, 2 — bale strap, 3 — anchor, 4 bollards, 5 — windlass, 6 — rescue buoy 7 — 100-mm gun, 8 — cabin, 9 — pole 10 — open 11 — pennant, 12 — finder, 13 — 45-mm gun, 14 — flag-Navy, 15 — lifebuoy, 16 — windlass, 17 — cleats, 18 — bale strap, 19 — torpedo tubes, 20 — vertical steering wheel, 21 — thruster, 22 — horizontal aft rudder, 23 — nasal horizontal steering, 24 in Cluses, 25 — torpedo tubes.
The war was over. Most of the crew s-56 returned to peaceful work, went to a new place of service, her commander, and the boat was left in the North and was a long time there, until the day when an order was received to return to the far Eastern borders through the icy seas of the Arctic ocean.
This campaign ended successfully. The years went by, and finally, for the “With-56” the time has come to give up his place to new ships. But in memory of military Affairs veteran steel had the highest honor — to remain forever in the ranks. In November 1972 a powerful crane lifted the submarine s-56 from the water and lowered on a special platform, which took the boat to the pedestal. S-56 became the ship-monument.
The technology of manufacturing of model of the submarine s-56
The case of the model submarine is made from a block of wood on the templates taken from the theoretical drawing. The final finish is done with a file and sandpaper. Rooms papers must gradually change. To ready the body are attached is made of steel horizontal and vertical rudders, screws, fencing rudders. Fencing rudders, shafts, propellers and satires made of wire.
The conning tower and its fence, it is advisable to cut and attach to the body with waterproof glue and nails. Wood is done and the periscope stand. Themselves periscopes, radio antennas, and enter the finder going out of the wire. Flooring cuttings can be cut from plywood, railings — wire. Running lights are glued to the wheelhouse; is denoted by the color of their paint. Sobral on the cabin is made of wire; attach it to suggest: to be done in cutting holes with an awl, fill them with glue and then inserted into the holes of crabtrap.
Layouts 100-mm guns and semi-automatic guns are cut from wood, the upper part of the rescue of the letters and deck hatches — from plywood. That, and the other is attached to the deck with waterproof glue.
The color of the model: the cockpit, the body of watereye, top deck hatches — grey-blue (ball). The waterline is white. Periscopes, radar, antenna input, satires, steeples, deck logging, artillery, raping on the deck and in the cabin, upper deck, deck the wheelhouse, the hull below the waterline is black. Propellers painted in bronze.
On the conning tower it is possible to write in white paint the name of the ship, but it should be remembered that during the war it was painted while in the postwar years, in its place wrote the tactical room.
Table model fence felling cut from construction paper and paint, and make a stand.
TACTICAL AND TECHNICAL DATA OF THE SUBMARINE S-56
Displacement: surface — 780 tons, underwater — 1050 tons speed: surface — 21 knots, underwater — 10 knots; armament — 1 45 mm gun, 1 gun 100 mm, 6 torpedo tubes 533 mm; engine power, HP: diesel — 4200, electric motors — 1100; diving depth — 100 m; length — 78 m, width — 6,4 m; draught — 4 m; crew — 45 people.
I. BECIN