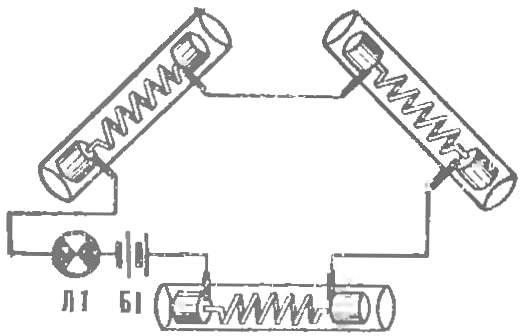 The phenomenon of weightlessness allow you to demonstrate on a normal school lesson original instrument, developed at the physics Department of the Khabarovsk pedagogical Institute, the author of the designs — candidate of physico-mathematical Sciences, associate Professor Zhukov.
The first device consists of three small connected to each other cylinders.
Every one of them inside two pins, spring and two cargo. The weight of each load a little more than the elastic force of the spring at the closed contacts (Fig. 1).
In addition, the device has a battery and light bulb connected in series with the cylinders and with each other.
The whole system is placed in a transparent bowl: plastic squeeze two hemispheres, and then connect them tightly. You can start experiments.
While the ball rolled on the table, the lamp is not lit, because some of the goods at the expense of its weight in every single moment pulls the spring, thereby opening the electrical circuit. So while zero gravity is not. The lamp will light up only if all six weights will touch the contacts. And this is possible only in one case: when their weight is equal to zero, that is, at zero gravity (Fig. 2). 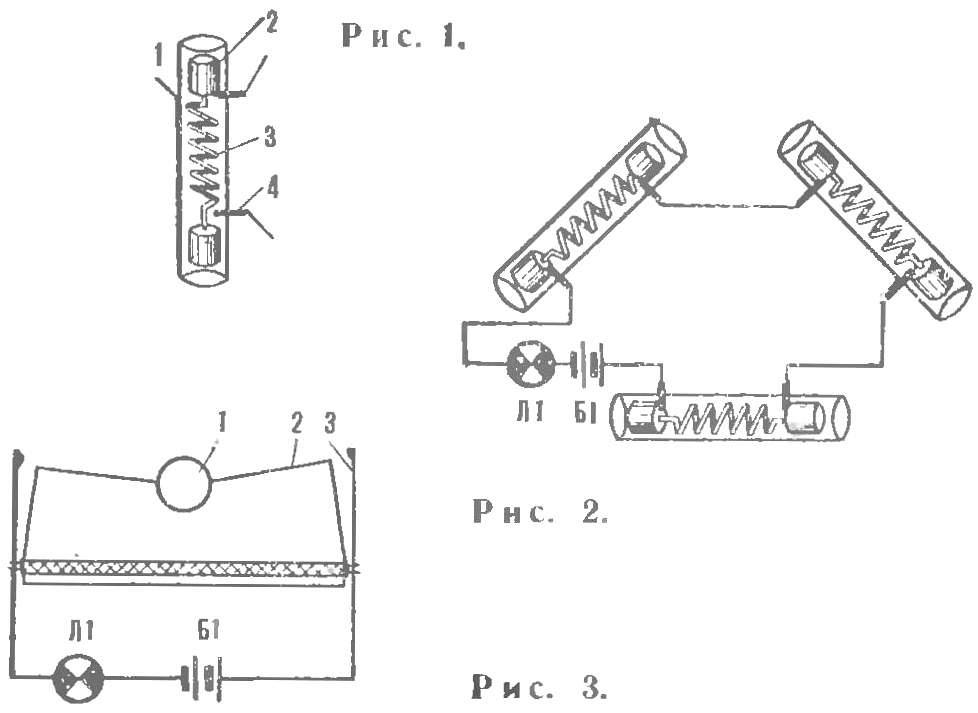 The teacher throws the ball and the lamp lights up, drops it, same thing, throws his student-assistant for the duration of the flight, the light bulb glows. Now the guys clear that weightlessness can be, and in the fall of the ball when throwing up, and when he flies in a parabola.
But suddenly the thrown ball is not lit up. On the faces of the boys bewilderment. The teacher explains: before you throw a ball, he spun around the axis. And in this case, the weightlessness does not occur because the angular acceleration created the so-called artificial gravity during free flight.
Interesting and the second device (Fig. 3). The same balloon, but inside of it — the cargo, two pairs of contacts and the bulb with the battery. The weight here is selected so that it was equal to the geometric sum of the forces of the yarn tension which the load is attached to the contacts.
Anyway this ball, the light will not light, since in every position a pair of contacts will always open under the action of suspended loads. When the ball is thrown, the load becomes weightless, and the light comes on.