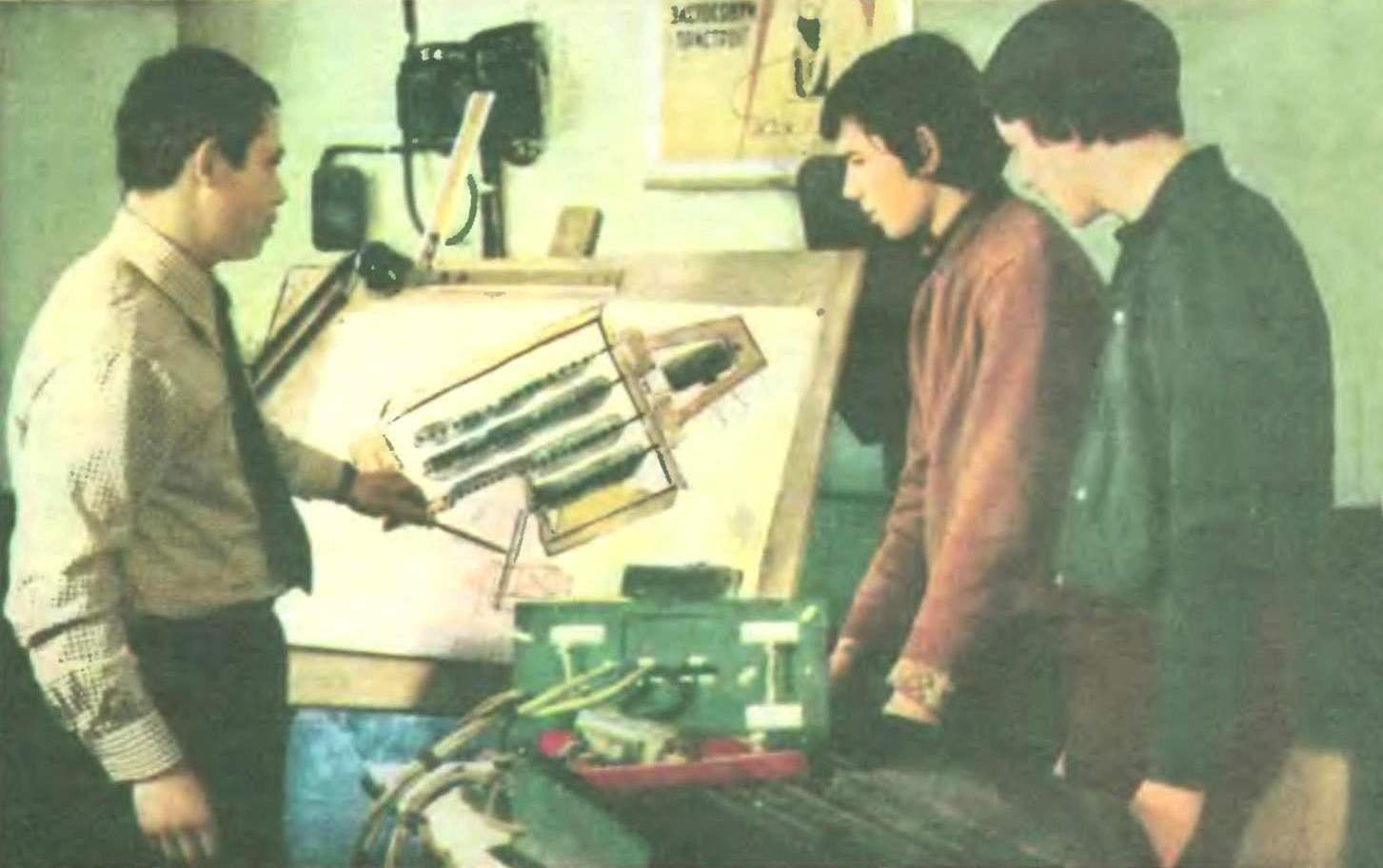 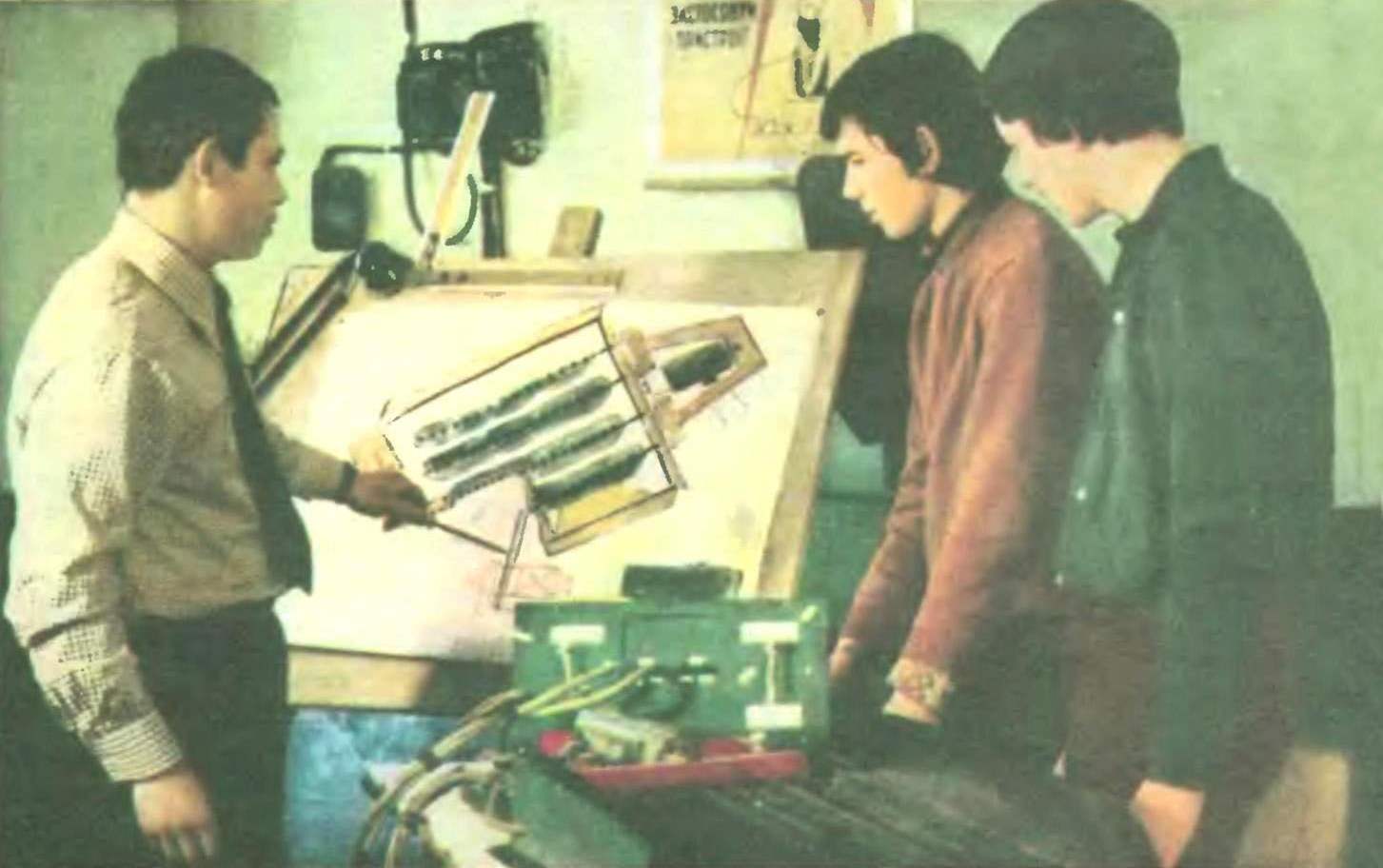 And now ka journal tab you can see a few fragments of an unusual creative process. The organizers — students of physico-mathematical boarding school at the Kiev state University. “The General line” the search has identified her as the boys themselves, modelling methods of movement of living beings: walking, crawling, hopping device.
Unusual circle directs the scientist — candidate of technical Sciences Anatoly Y. Lyubarsky. Position it — head of laboratory of the Republican center of Metrology and standardization — as you can see, organizations that are very distant of St biomechanics. But for the past seven years regularly, two to three times a week, comes Anatoliy Yakovlevich after working in macmasters school and here, in the circle of boys, possessed, like himself, “conjures” on the creation of unseen machines.
The technical means shown in the tab, it seems to be simple. But before they have to walk, take a guess! For example, a mechanical beetle (photo 1). At the core of the walking mechanism — a mechanical Cam: it “paw” raking forward like oars (Fig. 1). Applied two separate drive — one for each Board. According to the authors, these thrusters can be used in difficult terrain. For example, in the tundra, in the sand… and even on other planets! 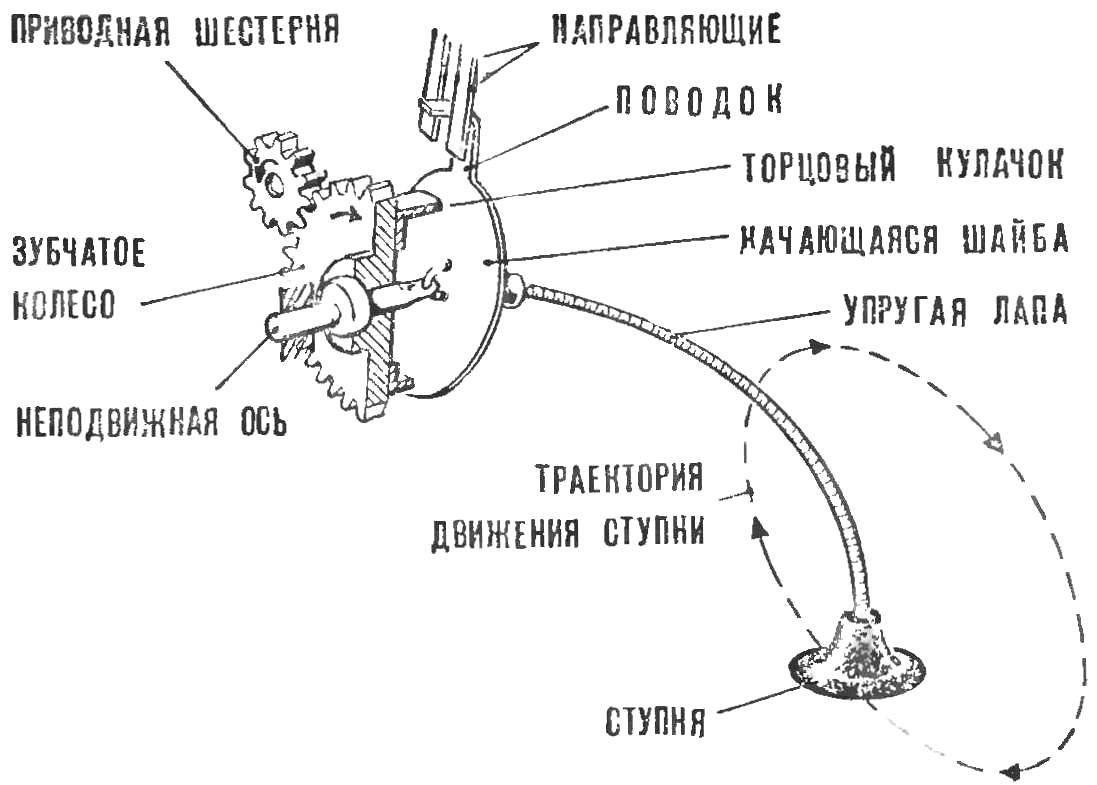 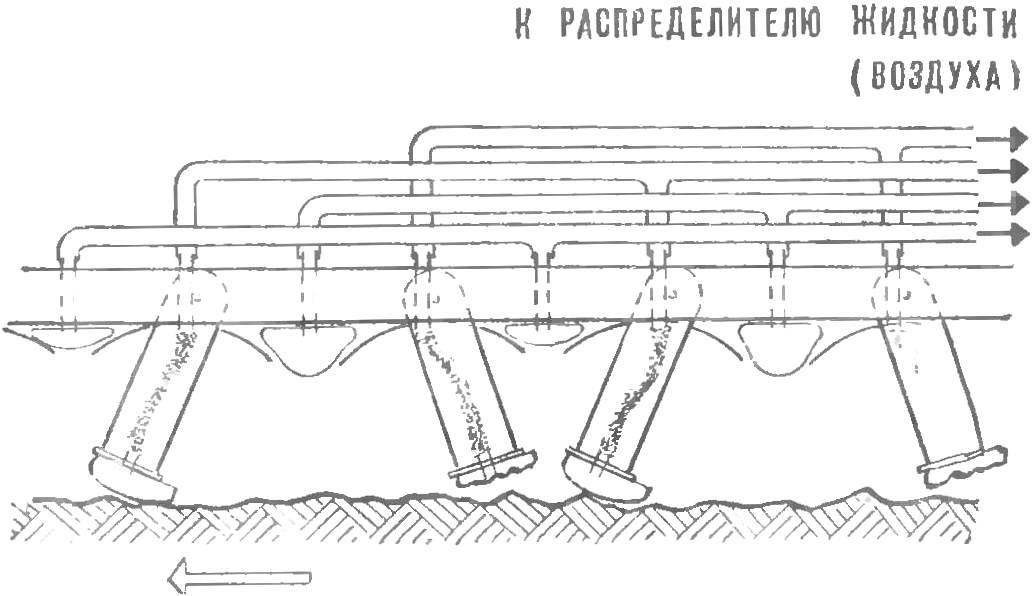 Fig. 3.
In photo 2 walked another device on the pneumatic cushions. The model simulates the movement of living beings numerous, but short, not fluff when you step legs, like centipedes. Step is obtained by two pneumatic cushions, one of which creates a vertical movement, the other horizontal (Fig. 2). The goal is to create the propulsion for difficult terrain, which can flexibly adapt to changing conditions.
Then there was created a mechanical “worm” (photo 3). The intent of the designers — a device for routing channels in the soil at any depth, without opening the surface. Such a machine would be very useful during the sinking of the drains in mining, reclamation, wells and tunnels for pipes, cables, etc.
The basis of the model of this unusual car put the principle of motion of an earthworm (Fig. 3). The design consists of separate sections, movable in the axial direction and having elastic swelling of the shell. Under the action of compressed air, these shells expand. Resting thus in the tunnel walls, the head section of the machine pulls up for a rest section. Then all these sections the same way abut the walls of the tunnel, and head resting on them, with a force thrust into the ground. On the diagram (Fig. 3) it can be seen that longitudinal movement of the model comes from the electric motor placed in the head, by means of screw pair. Shell also sections inflates the compressed air that emits a special compressor. In this case, the air plays the role of a certain group of muscles and hydraulics, which uses a live worm. 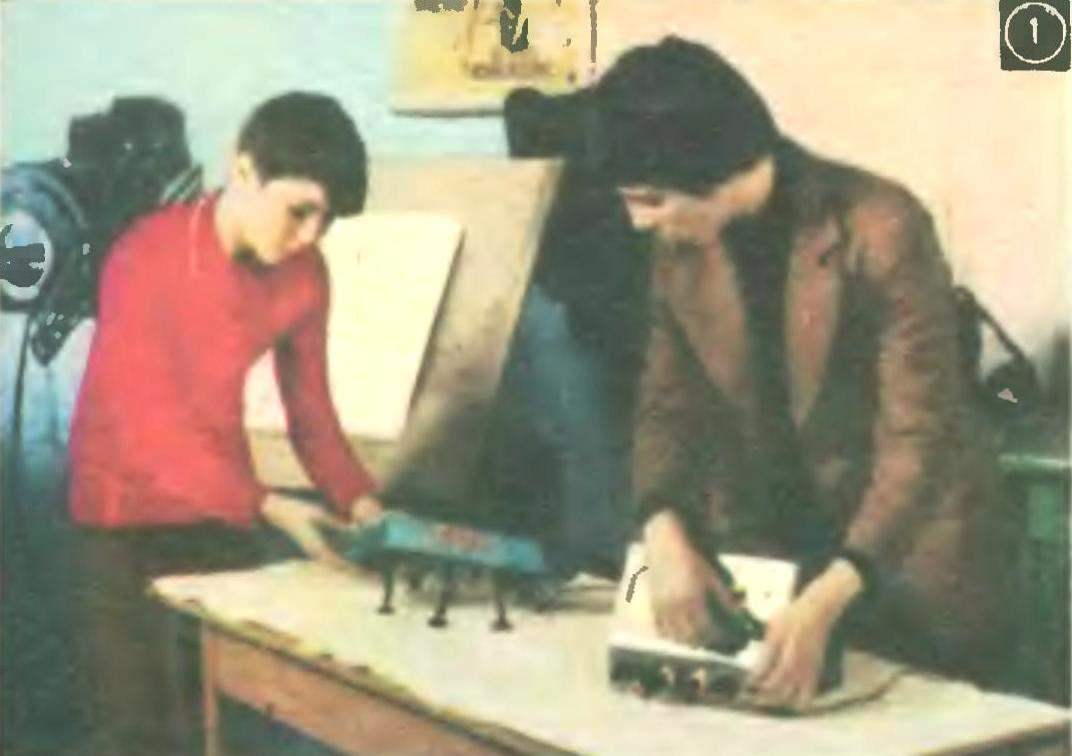 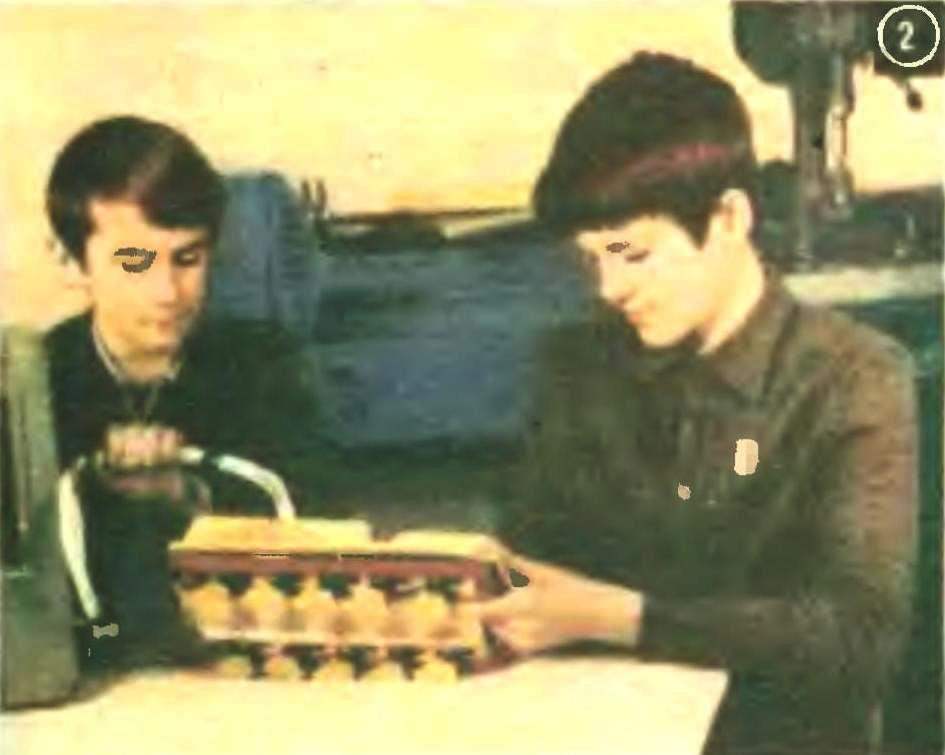 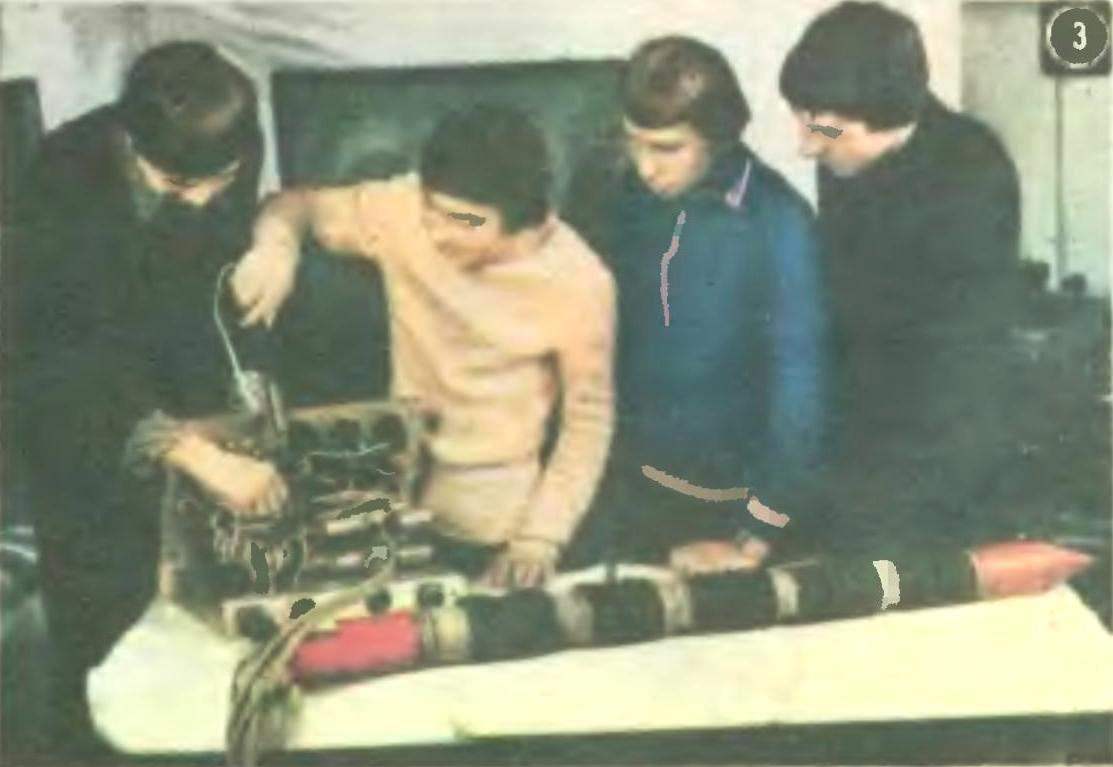 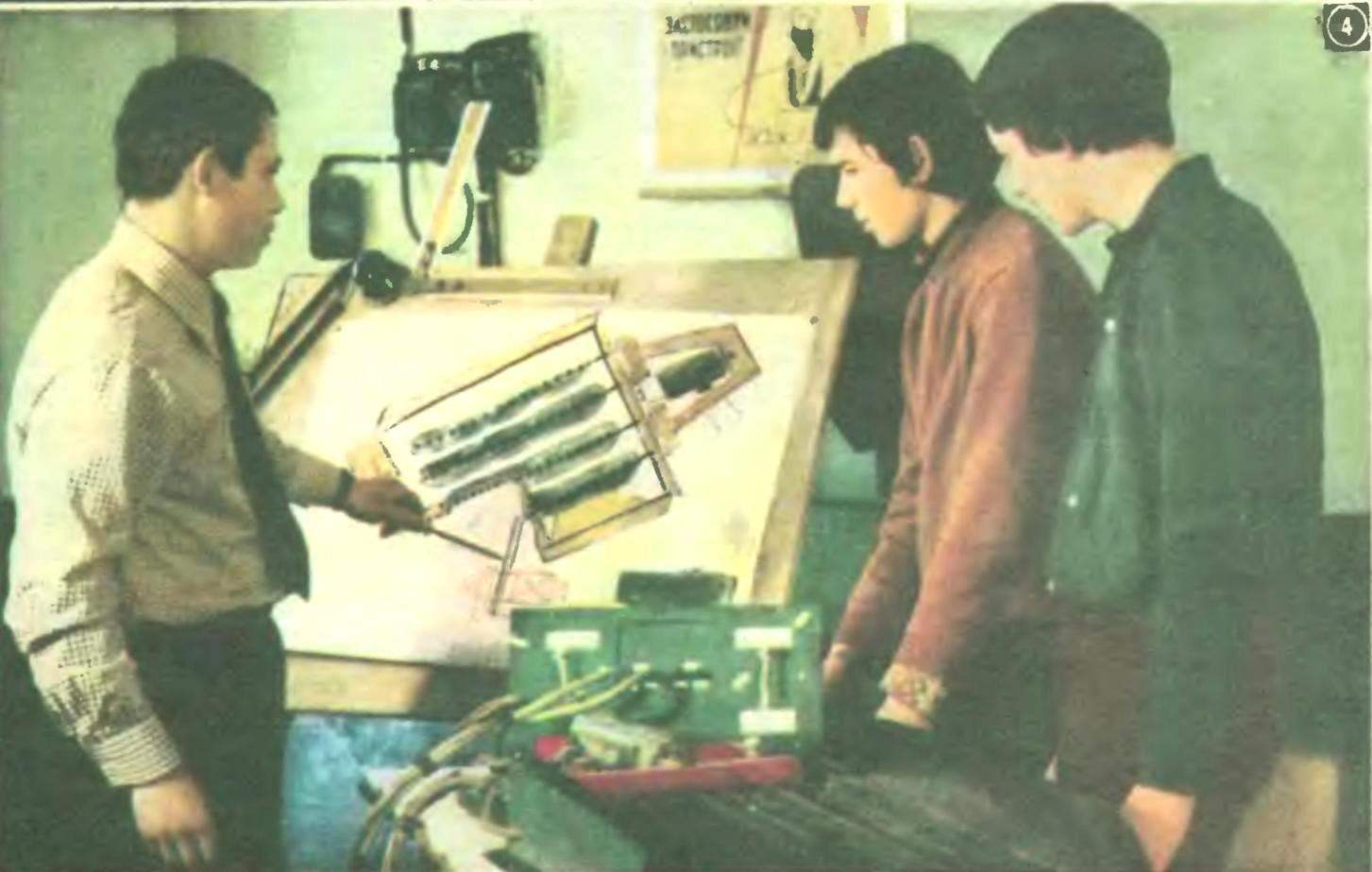 Unusual machine — a kind of biobody — develop vospitanniki physics and mathematics school at Kiev state University:
1 — mechanical walking beetle; 2 — pneumatic centipede; 3 — mechanical “worm” — plotter tunnels; 4 — self-propelled “wave” conveyor.
Of course, could be applied in the model and the hydraulic system, but it is much more difficult, so the guys are quite satisfied with the Pneumatics. Alternating cycles of action Pneumatics in sections is provided by a simple logic circuit assembled on four relays. The design of a worm modular. This means that the number of partitions may vary and thus may change the magnitude of a force on the head depending on the working conditions: structure and hardness of the soil, the angle of inclination of the tunnel.
Another interesting development of the young designers of the Kiev physics and mathematics school — conveying surface (photo 4). This is not an ordinary belt, as we used to imagine — in the form of a moving belt or parts with scrapers, cells, etc. In the model in question, the surface is horizontal not moving. Made of an elastic material, it only fluctuates in waves that propagated traveling wave. Of course, continuous, with a constant “amplitude”, which sets located beneath the surface of a rigid mechanical device. And due to the wave motion of surface moving its cargo — bulk materials: grain, sand, gravel, pebbles, crushed coal, ore and others. But if the bottom of the device will serve a similar “wave” surface, it similarly will be able to move itself, to crawl.
Young designers have provided the car and a special knife for taking of the load, almost like a bulldozer. The power part of the model is very simple — again the compressed air and the electric motor with a screw pair. The idea is borrowed from fauna: fishes, many marine animals and reptiles move using undulations of the body.
So can briefly describe the searches (and finds!) young Kiev biomechanical, inquisitive comprehend the wise engineering of living nature and creating car models in its image and likeness.
How many of you have been able to apply the technique of “patents” of nature? Share your experience, write to the editor! If you have found the solution interesting, responds to the laws of nature and technology, it will probably be published.
Yuri STEPANOV