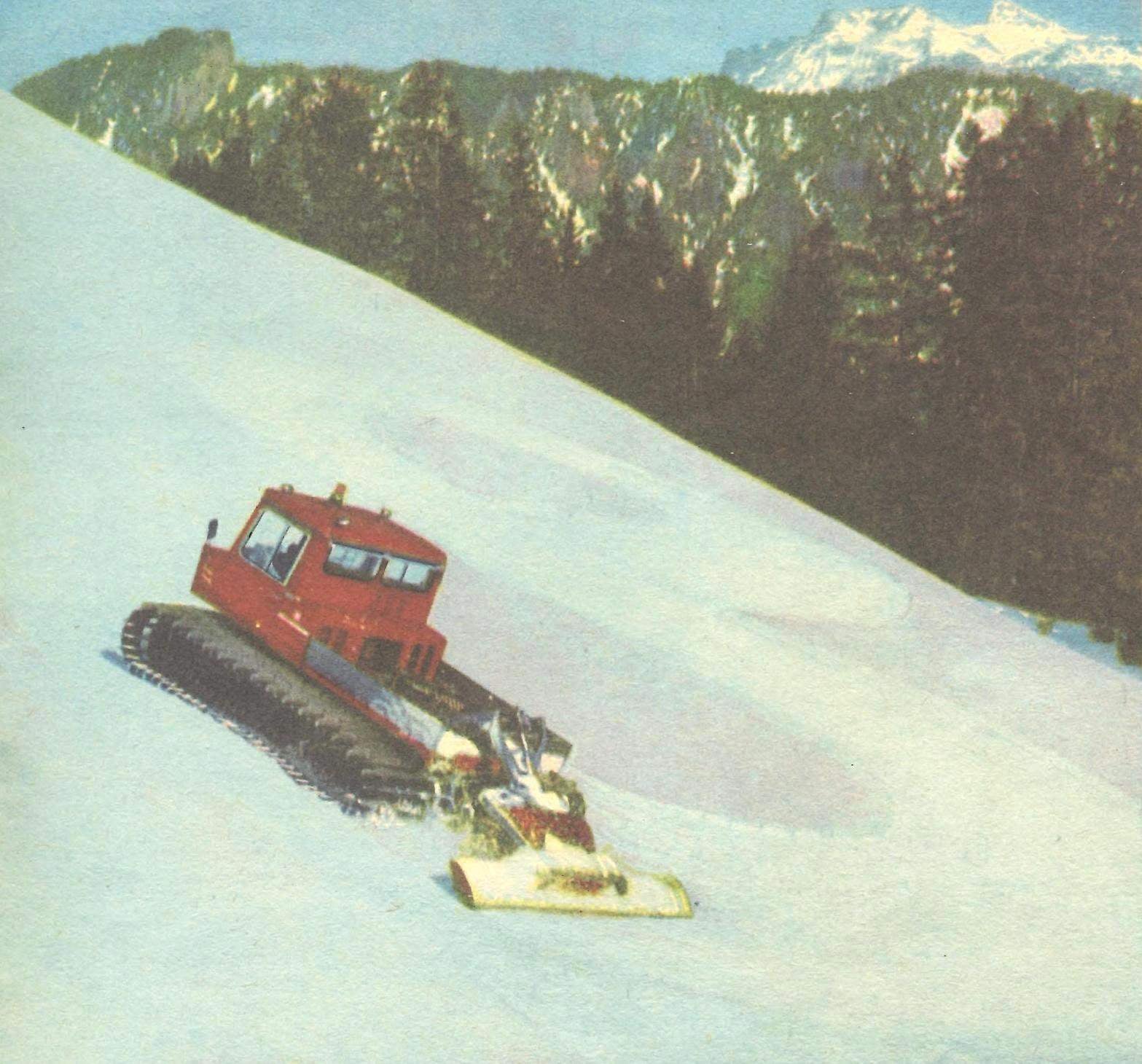 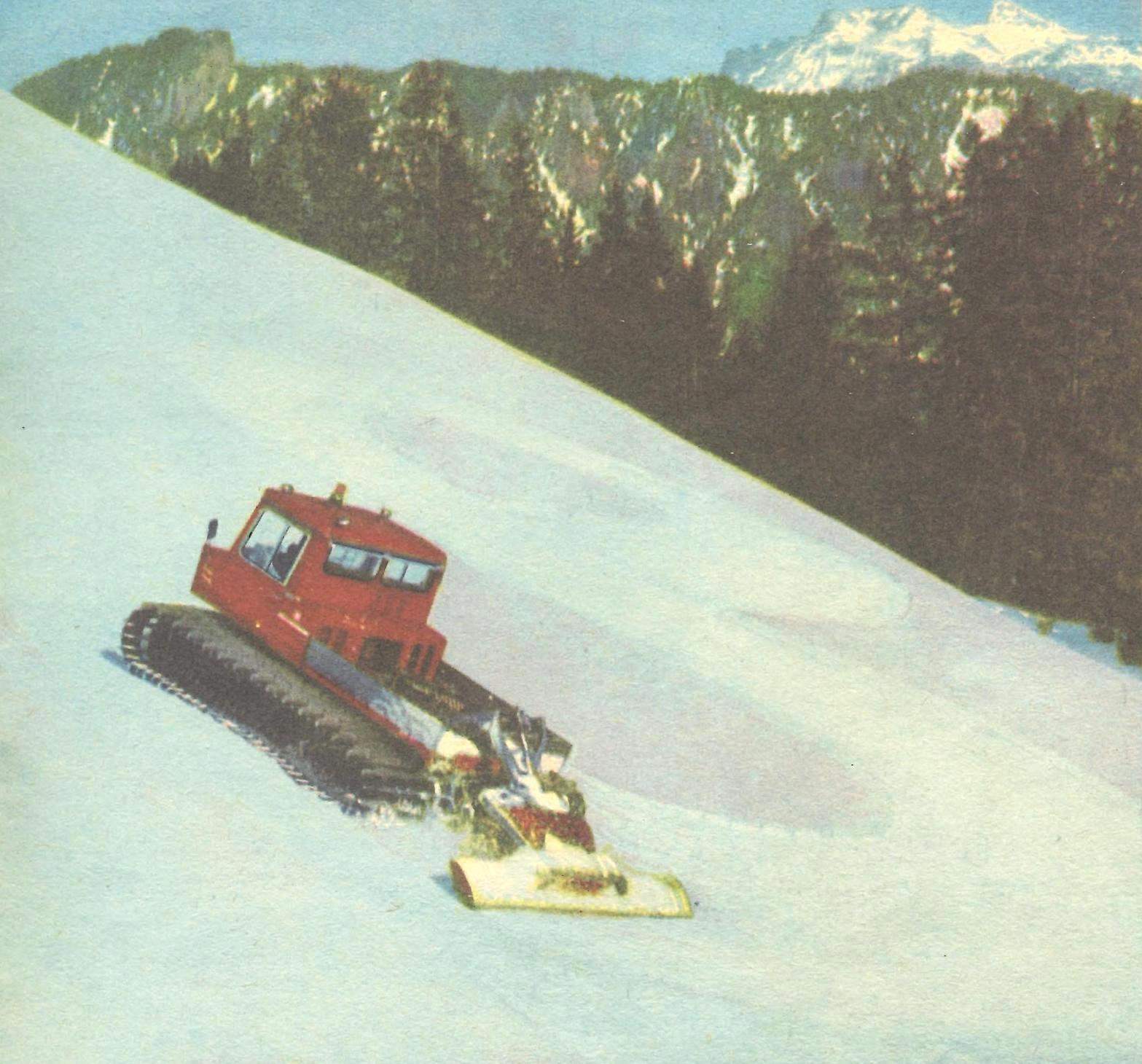 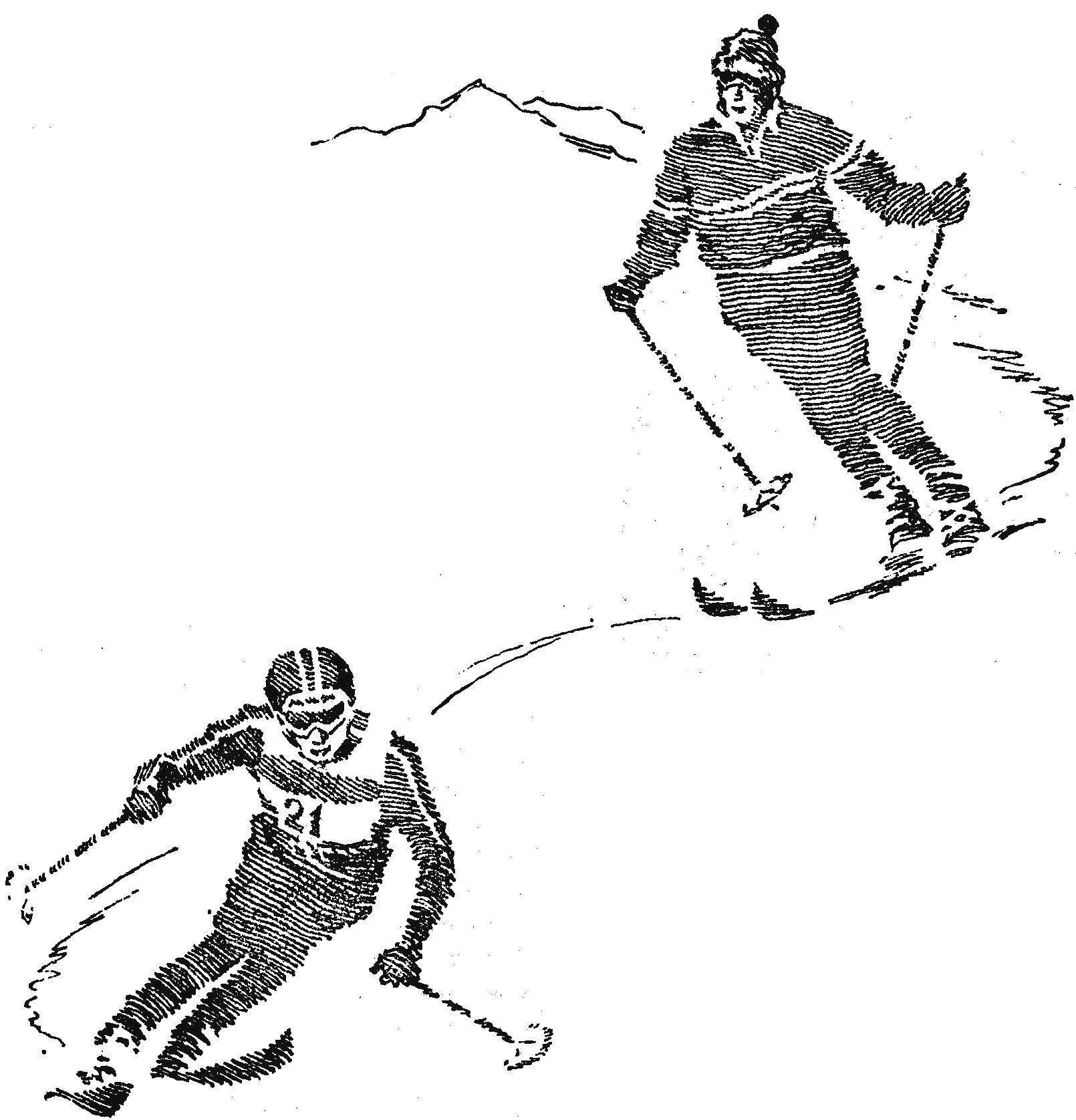 Snow ski slalom slope and the heavy steel tracks; clumsy tracked vehicle and sport… isn’t it rather strange combination! However, nowadays, these concepts are becoming more closely related to each other.

One of us personally or on the screen with a sinking heart watched for downhill skiers brave the steep slopes of the mountains, virtualnymi turns of the slalom. But, perhaps, nobody had to reflect on what a great work is to lay out and prepare such a ski slope. In fact, until recently all slopes downhill was done manually, or, if I may say so, “unonou”: several tens or even hundreds of skiers slowly, step by step up the “ladder” from the foot of the mountain to its top, tamping skiing soft snow. But it was just him again to fall, as all this hard work had to be done again — often at night in order to finish the descent to the morning competition. But the length of the tracks is usually up to several kilometers.
To help the athletes came designers. On the mountain ski bases, there was a small track-type tractors snowmobiles with unusually wide tracks. It was a machine designed specifically for paving the ski slopes and care for them.
A new kind of snowmobiles there are only a few years. That is why international technical terminology, yet even the common names for these machines. Sometimes they are called snowmobiles, on behalf of one of the first tractors to prepare the slalom descents, born in 1959 in Switzerland. 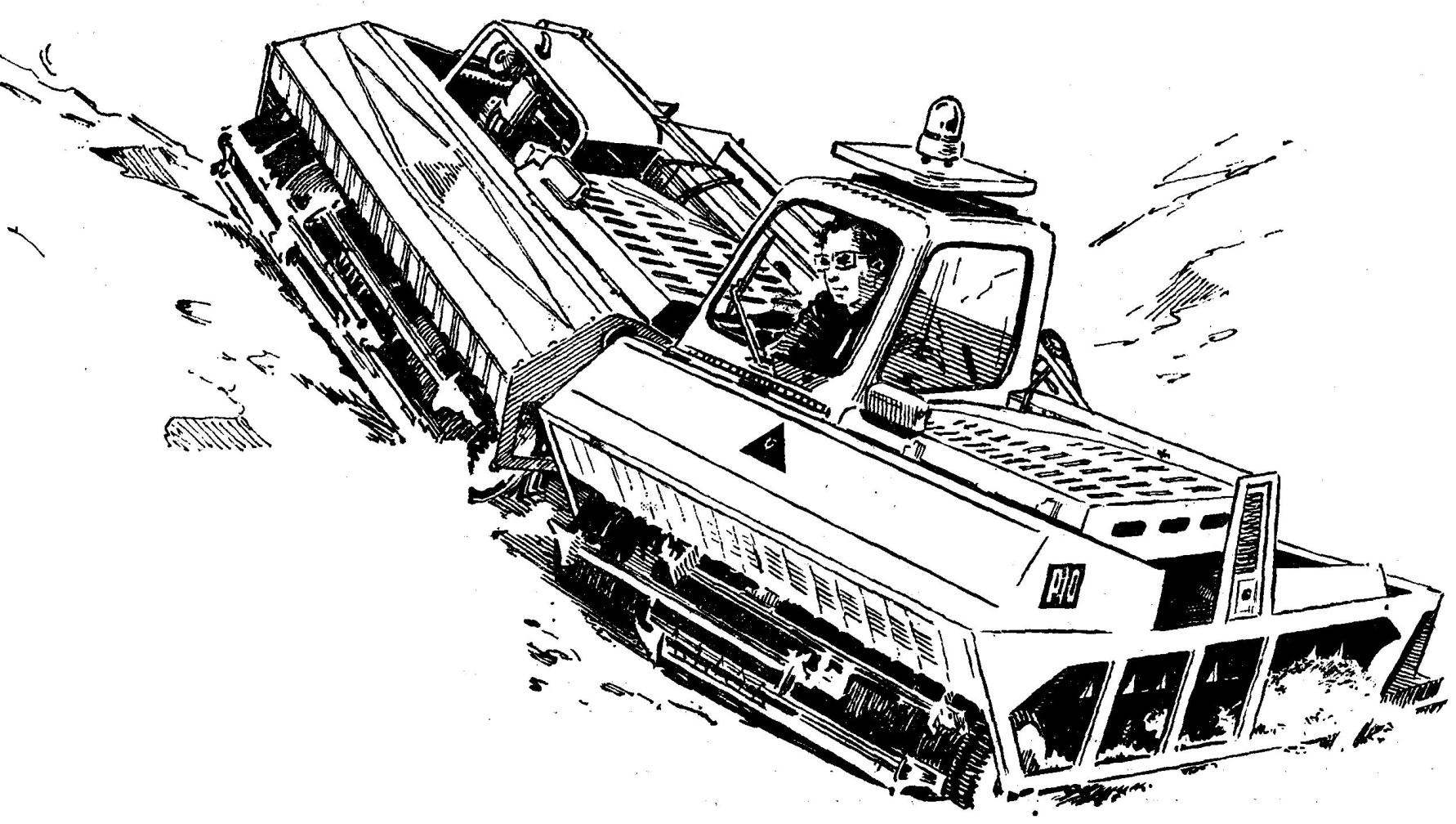 Fig. 2.
Before the designers snowcat — let’s agree to call them so — was quite a challenge: when forming track tractor-snowmobiles don’t have compacted snow cover is stronger than the skier. Only then slalom will retain the necessary agility. At the same time, the loss of the compacting snow skiing athlete will be reduced to a minimum, allowing maximum speed. Note that the specific pressure of the skier on the snow is only about 0.022 kg/cm2, while the high-speed descent from the mountains it is reduced to 0.020 kg/cm2.
So, first of all required to facilitate the snowmobile. So the machines began to supply heavy steel, and light and wide rubber tracks. As a result, most super specific pressure on the snow is in the range of 0,028—0,034 kg/cm2, which is considered quite acceptable.
Of particular interest among such machines are “Champions lightweights”. For example, the Swiss sled “Snowcat-SV” has a specific pressure as the skier is not more than 0,024 kg/cm2. And this is at a bodyweight of about 1 m. the “zero-gravity” machines on snow tracks add to up to a width of 1.5 m and a length of more than 5 m due to the artificial “extension” of a snowmobile, these figures surpassed other car — Italian “Print P-15”, specific pressure of which at full load is only 0.022 kg/cm2.
Compaction of snow between the tracks, increasing the width of the capture – and improve performance on the snowmobiles kick from the rollers (Fig. 2). Most often they are located behind and grab once the band of snow of a width of from 2.5 to 5 m On the Swedish snowmobile “Truck-Master” one roller is installed at the front and the other two moved to the side and the snow is compacted on the sides. The total width of the new power line is increased to 4 m.
Skating rinks in most cases are made of rubber tracks caterpillars, and sometimes of plastic or light alloy. Them using a system of hydraulic cylinders raise, lower, and pressed against the snow, given its looseness and humidity. For the final finishing of the track surface using a plastic or cloth Draghi, which set back rollers. They slide easily on the snow surface and remove from it the smallest irregularities.

Replacement equipment for super
Italian snowmobile “Print” used vibrating corrugated plates with small vibrators, which ensure a very high quality on the surface of the ski. There are also skating rinks, and the dredge of a special profile for the gaskets ski slopes and tracks with the formation of the low sides of each ski (see box).
On two-piece snowmobile “Print P-15” is worth special mention. Articulated tracked vehicles, consisting of movably connected front and rear sections is not a gimmick. And the groomer (Fig. 1) made in a different way: the left and right side pivotally connected with each other. The machine was “wide”: when the length of only 2.5 m width is 3.6 m. the Small elevation and a shallow recess she overcomes, “paralamas” in the longitudinal axis.
Left and right sections are similar in construction and almost completely unified. Each features a engine, transmission, a leading caterpillar. At failure of the assemblies of one of the sections of the snowmobile can move due to the second. The driver’s cab is mounted on the left-hand section, the right is the working console.
On an articulated snowmobile engines are installed in two types: two-cylinder Fiat air cooling with a volume of 650 cm3 and a power of 30 HP or a two-cylinder 45-horsepower DAF with a volume of 850 cm3. Regardless of the type of engine used a semi-automatic V-belt transmission (from the Dutch car DAF). Weight swivel snowmobile is 1000 kg and the payload capacity of each section is 300 lbs. With full load the machine can develop speed on the virgin snow up to 27 km/h. 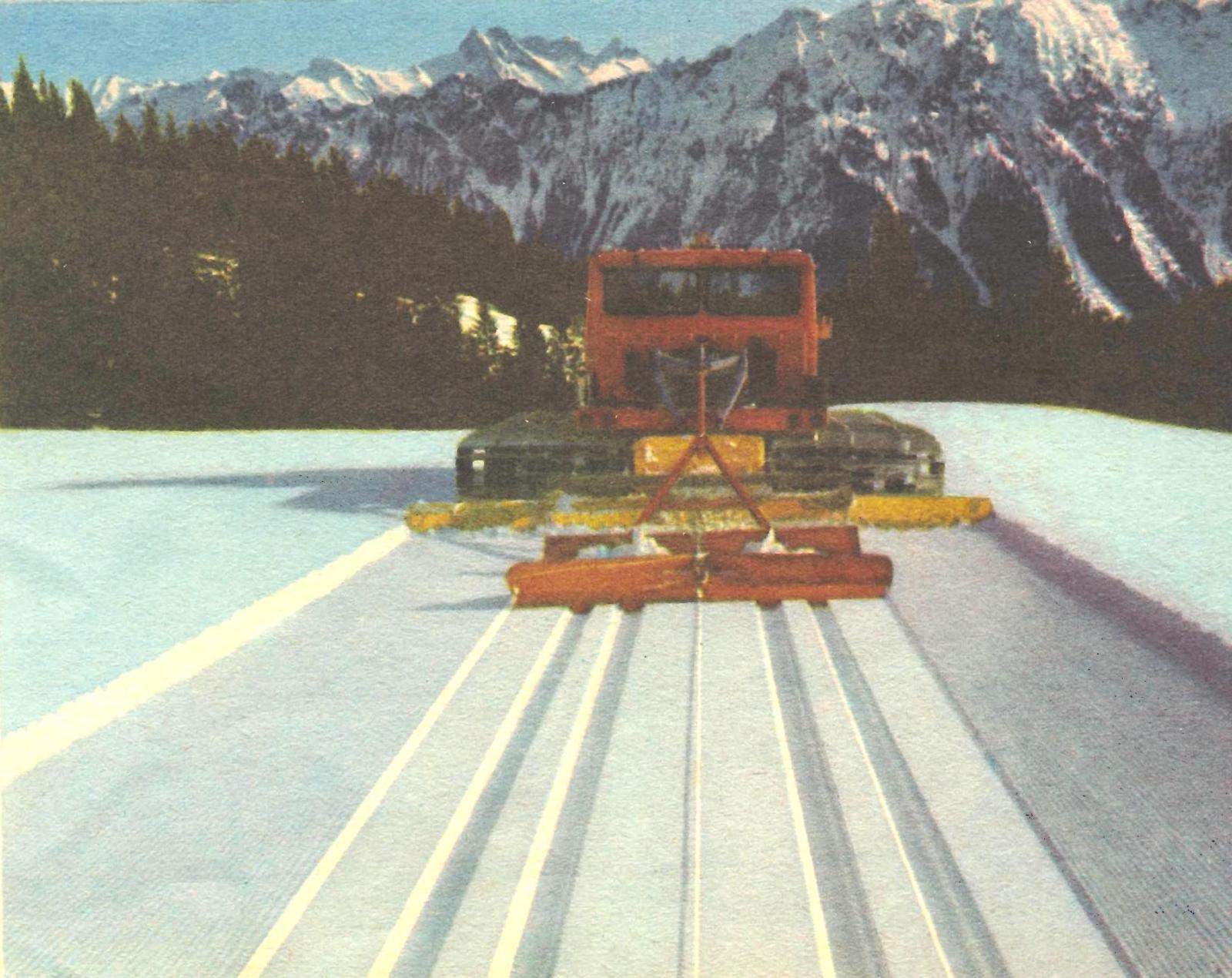 Snowmobiles — tractors for slalom tracks — new type of technology that facilitates the spacer tools all kinds of work – from preparing the slopes for downhill skiing to the transport of goods, delivery workers or athletes up.
Despite the width, machine the most maneuverable in the movement of the tracks left and right sections in different directions Snowmobiling takes place on the spot, that is, the turning radius equal to half its width. When working with additional sealing devices snowcat per hour can handle up to 40 thousand m2 of surface.
The design of the snowmobile of this type only in the world. She has already received many prizes and awards in various international competitions, shows and contests technology.
Snowmobiles allowed to release from the hard work of dozens of people: the entire scope of work performed by one person — the driver. Through the use of these machines the quality of the snow surface significantly increases, allowing the skiers to achieve even better results.
By the way, snowmobiles are successfully used not only for its intended purpose, but also for the transportation of people and goods, rescue missions, clearing roads from snow.
Snowmobiling can be mounted winches, dozer blades, passenger, ambulance or cargo. They are capable of climbing to 45°, and the horizontal sections develop speed on loose snow up to 30-35 km/h.
Tractors for the preparation of ski slopes are available today mainly in the Northern or mountainous countries: Switzerland, Austria, Sweden, Canada and others. Successfully they work and the high slopes of the Soviet Union.
E. KOCHNEV, engineer