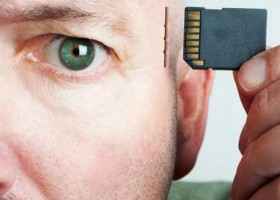 Scientists from the Schools of Viterbo University of southern California, headed by Dr. Theodore Berger has created an electronic chip that can be implanted into the brain and connected to it by means of electrodes.

Using the signals of these electrodes, the chip can store data, acting as an extension of the memory capacity of the brain.

Rodents, which held the first trial of this implant, I remember some of the facts at the time when the implant was switched on. When it was turned off, the rodents were completely forgotten what was contained in the memory of the implant. “Just turn on the switch and rodents remember …. Turn it off and rodents forget …” – said in a press release.

These experiments and studies for the first time in history led to the fact that it is implemented full control of the functioning of the memory areas of the brain. Has been studied and implemented in the form of an implant the principles of coding the memories and reflexes, and the implant was able to identify and manipulate in real time the processes of entry, storage and deletion of data which operates on the brain. The possibility of a new implant can help restore and expand the mnemonic of the cognitive processes of the brain.

So far, the tests have been performed only on rodents, but scientists are going to take the next step, introducing such an implant in the monkey brain.

They hope also to obtain positive results. Of course, the new implant is not designed to instantly learn a foreign language or JIU-jitsu, but first and foremost to help people suffering from Alzheimer’s or brain injuries that caused memory loss.