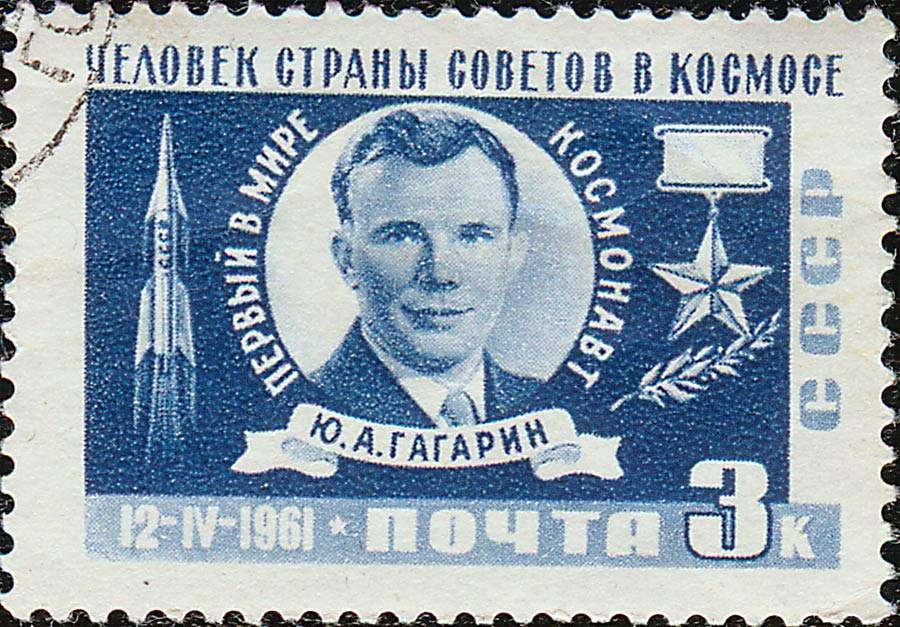 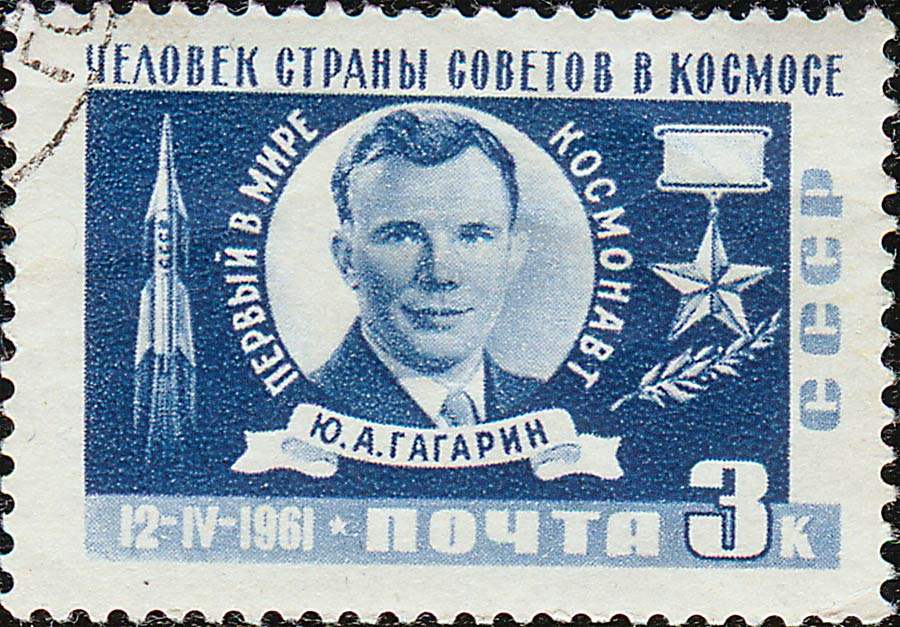 This event happened April 12, 1961: a powerful carrier rocket put into orbit a spacecraft “Vostok”, piloted by our compatriot Yuri Gagarin. His name was the synonym for extraordinary heroism and amazing courage. The loud echo of the flight immediately and reached the “shores” of the world of philately. Post offices 25 countries dedicated to Yuri Gagarin about 150 commemorative stamps and blocks.
The next day after the launch of the Vostok spacecraft entered into the postal circulation of the first Soviet stamp (1) “Gagarin” series (in a series of 6 stamps: three perforated and three imperforated) with the nominal image booster, which would orbit the spacecraft. And on April 14 at the post boxes appeared in the second miniature, rendered more informative. It shows the major milestones of the Soviet space program of that time: the first satellite, space rocket, symbolizing launches of unmanned satellites, ships, and, of course, the spaceship “Vostok”, but also in a schematic view. Finally, on 17 April 1961 was released the first stamp with a portrait of Yuri Gagarin, who became the most popular “Gagarin” brands (2). It marked the beginning of the portrait gallery of the astronauts in philately. On the same day, all three stamps of the series were also published in bezzubtseva.
In the following years came about 40 stamps and blocks, which tells about the flight of astronaut-1.
To commemorate the first anniversary of the space flight of Y. Gagarin, the Ministry of communications of the USSR issued a series of four stamps with coupons. All of them (3) have the same pattern and the nominal value, and differ only in the color of the die coupon and issue (perforated and imperforated). The image spacecraft and the launch vehicle performed conventionally. However, the miniature is notable for the fact that they with documentary precision shown is the angle (about 65°) of the orbit of the spacecraft “Vostok” with respect to the plane of the earth equator: one of the important parameters of motion of spacecraft. The series began a tradition to celebrate the Day of cosmonautics (established by the decree of the Presidium of the Supreme Soviet of the USSR of 9.IV.1962) philatelic releases. Some of these miniatures (6, 8) is shown in tab. 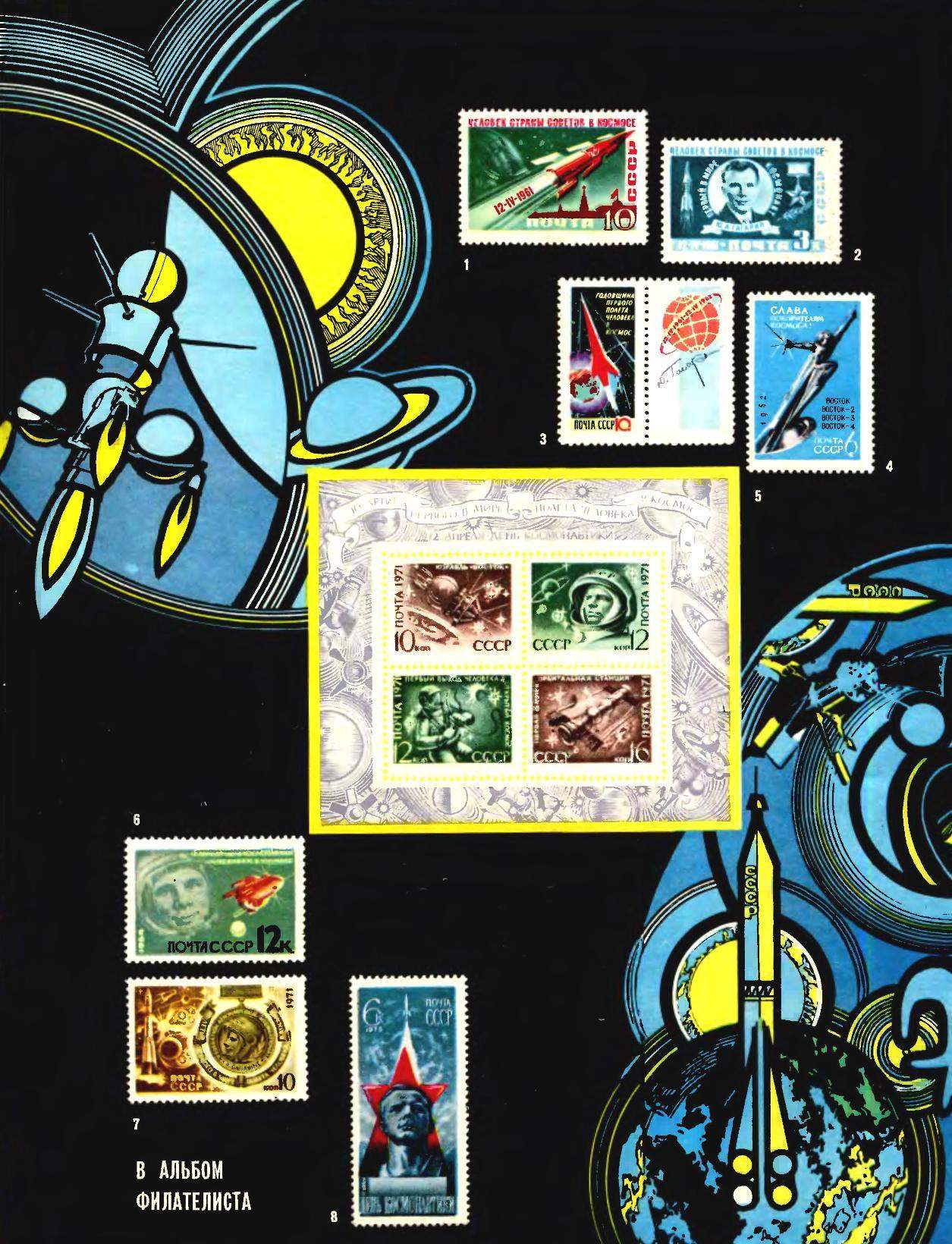 It is known that the philatelists are interested in postal units, and their collection is particularly popular. Therefore, it is clear attention to the first post Soviet space block, released in November 1962 in bezzubtseva and Zubtsov options. It is given a group portrait of the first four cosmonauts: Gagarin, Titov, Nikolayev, Popovich. On the block field is shown well-known monument “In space” (the sculptor G. Postnikov), established in the territory of the red banner Military air Academy named after Yury Gagarin. This sculpture is depicted on the stamp (4) series “Glory to the conquerors of space”, which appeared a month earlier.
Not to mention another unit (5) dedicated to the tenth anniversary of the first space flight. It consists of four original brands (not separately issued), telling about the most outstanding achievements in the field of manned flights. The most notable among them is the one which depicts a space ship “Vostok”. The case in fact that is the only mark, where “East” is displayed without the third stage of the booster, i.e. in the form in which it commits orbital perished.
And finally, the review of the Soviet “Gagarin” brands will tell you about the post thumbnail from the series “10th anniversary of the world’s first manned flight into space” (7). It depicts a gold medal (the obverse) is named after Yuri Gagarin, established by decision of the 61st General conference of the International aeronautical Federation (FAI). The conference, held in London in 196В year, took two momentous decisions: the establishment of a new gold medal and assigning it a name of Gagarin, and the establishment of an annual holiday — the world Day of aviation and cosmonautics which is celebrated on April 12 (the day of Gagarin’s flight) in all countries as an international celebration of aviation and cosmonautics.
The gold medal named after Y. A. Gagarin cosmonauts are awarded annually for the highest achievement in space exploration for peaceful purposes. The first recipient of this prestigious award became twice hero of the Soviet Union pilot-cosmonaut of the GT Coast, flew (26-30.X.1968) on the spaceship “Soyuz-3”. The decision to award the Gold medal No. 1 was held on 30 April 1969 in Paris at the meeting of the Board of the FAI.
Shortly after the space flight of Gagarin on stamps began to appear in foreign countries. Exceptional efficiency distinguished the Czechoslovak post office. The next day a flight to Czechoslovakia came into circulation two miniatures, who told us about this cosmic event on 6 March 1961 he published a series of six stamps under the title “space exploration. The Soviet artificial Earth satellites and cosmic rockets”. The first five stamps of the artist f. Hudecek display the specific achievements of the Soviet space program, and at last allowed himself to dream, depicting a manned flight into space.
Quickly responded to first flight of man into space and other socialist countries. For the second half of April in Germany, Romania, Poland, Bulgaria and Hungary released stamps, obavestava the world of sensation of the century. Soon thumbnails on this topic, go into circulation in Mongolia (31.V.1961), Vietnam (15.VI.1961), Korea (11.VII.1961), Suriname (3.VII.1961). Then Gagarinskiy philatelic took the baton, Cuba, Guinea, Jordan, Mauritania, Bhutan and other countries. Interesting brand is the first “Gagarin” series GDR (1B-20.IV.1961), characterized by the diversity and originality of stories, more cognition. Particularly note the third stamp of this series, which shows the landing of the lander with an astronaut on Board 1 by means of a parachute system. However, in both cases, the image of the landing of the reentry vehicle differ from true, as some literature was found to contain errors in the description of the method of Gagarin’s landing.

Foreign stamps dedicated to the flight of Yuri Gagarin, as, indeed, many Soviet stamps issued in the first years after the flight, the spaceship “Vostok” was drawn purely arbitrary, and sometimes just symbolically, that made it change its appearance. That’s why collectors have shown greater interest in the brand from the Yugoslav series of EXPO 67, where the ship “Vostok” with the last stage of the carrier rocket was first given with photographic accuracy.
Their attitude to philately Yuri Gagarin expressed in the following words: “Space and brand… the Neighborhood of these concepts until recently it was impossible to imagine. However, it has been going on for a decade, and, even not being a stamp collector, everyone takes the macrocosm in microcasting for granted.” “Gagarin” marks that constitute a large section of the philatelic chronicle of the space age are modest and a monument to the first cosmonaut of the planet.
V. ORLOV