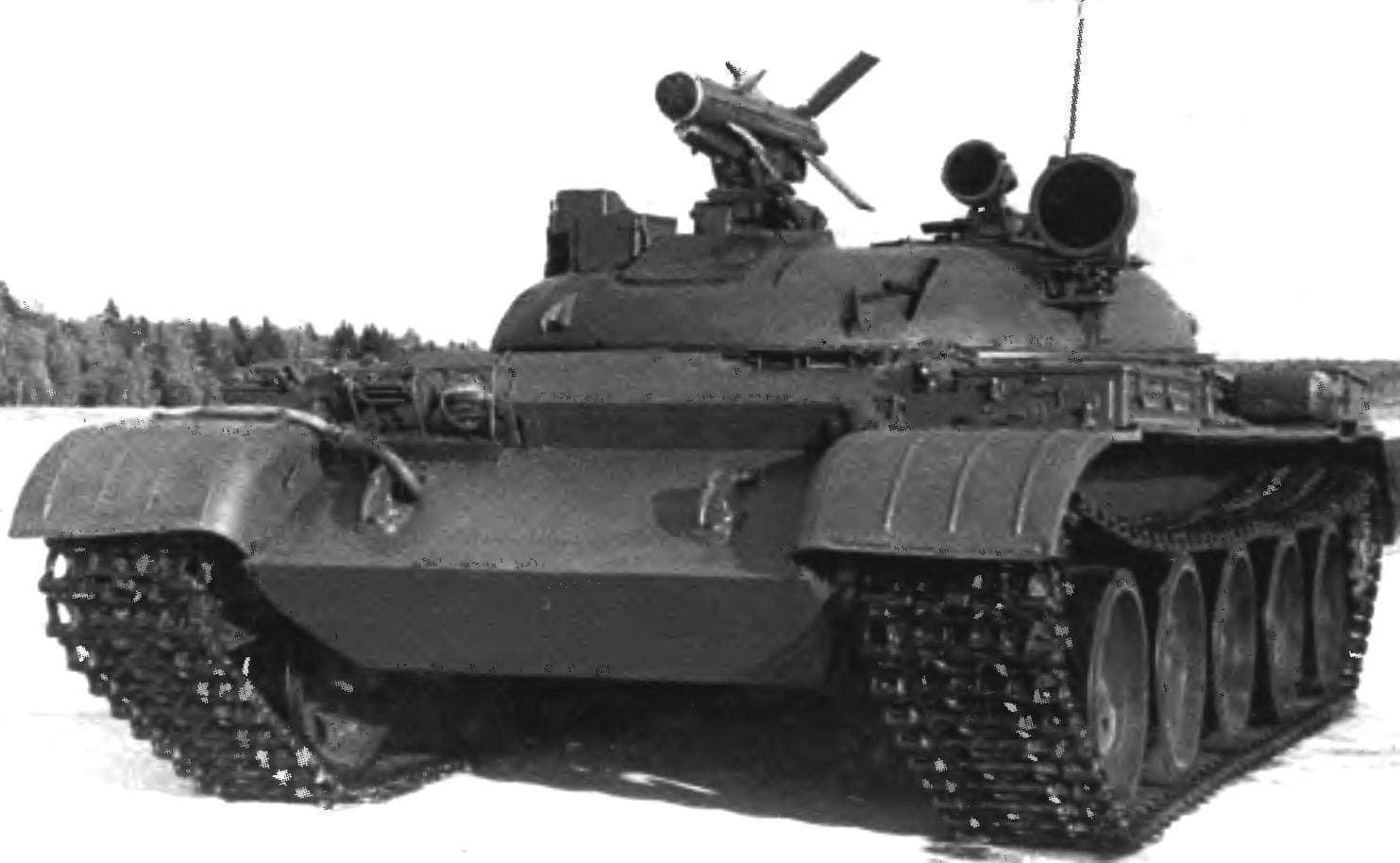 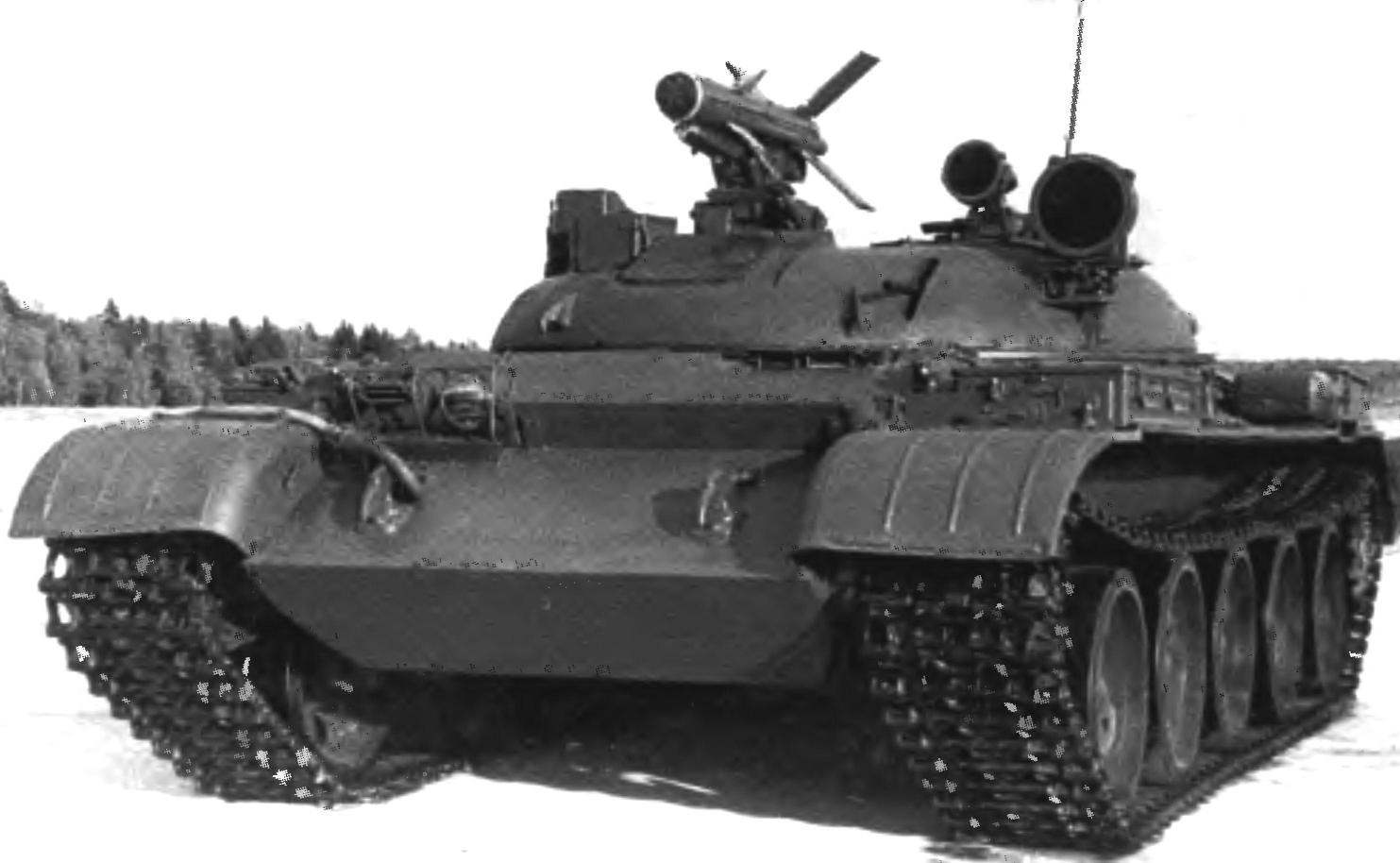 Question about creating a tank with a missile weapon for the first time raised the Deputy Chairman of the USSR Council of Ministers, V. A. Malyshev at the meeting with representatives of the tank industry on 31 January 1956 in Itself the idea of equipping tanks missiles was not new. Back in the 1930s on the tanks of the BT experiment was set starting devices for large-caliber rockets (RS) during the great Patriotic war base light tank T-60 was used to install reactive systems of volley fire (MLRS); the work was carried out on equipment of heavy tanks KV-1 TO the short tank rocket artillery system (KARST), but it remained at the stage of prototyping. The allies some American tanks “Sherman” had the rockets as secondary weapon. All the tanks weapons missile weapons was to install an unmanaged type RS, ERS-132.

However, by asking the chiefs of tank design Bureau: “which one of you is engaged in the installation of missiles in tanks?”, V. A. Malyshev was referring to a new generation of weapons, namely: managed anti-tank missiles — ATGM, combining a high probability of hitting the target and a huge amount of armor penetration cumulative warhead (KBCH).
The first ATGM was developed in 1944 — 1945 in Germany, and by the end of the 1950s they were armed the armies of all developed countries. Firing range ATGM was up to 6 km thickness punctured their monolithic steel armor protection reached 600 mm. the New anti-tank weapons immediately tried to equip and tanks. In 1959, the French engineers first in addition to the 75-mm gun its a light tank AMX-13 was equipped with a battery of four ATGM type SS-11. By the early 1960s, these extra weapons were equipped with British tanks “Conkeror”. Installation ATGM were placed on the armored French “Guccis”, American М59 and M113. Because of the complexity of reloading launchers (PU), they were equipped with batteries ATGM-type multi-barrel MLRS.
Already in the 1950s it was believed that the ATGM should either complement the conventional tank weapons, or can be placed on the mobile unit to strengthen anti-tank defense as infantry and tank units.
The rapid development of ATGM in those years even led some political and military leaders to the idea that the era of tanks ends that served food to the wrong conclusions in the direction of the development of the domestic tank. Was discontinued development and research work that promised much earlier to approach the creation of a main battle tank, development of its missile and gun armament.
In early August 1956 V. A. Malyshev once again we held a second meeting on “rocket” theme, inviting industry representatives, and the Chief of the Main armored rakotoarisoa offices. At the meeting, V. A. Malyshev all present have specifically been tasked together to create a fully armoured tracked vehicle armed with ATGM. All interested persons should gather in working order and to prepare a draft joint Decree of the CPSU Central Committee and Council of Ministers. The main condition was: missile weapons must be under the armor. This ruled out the use of multicore PU and required the installation of special machine loading.
L. N. Kartsev, a former chief designer of the tank, CB (Department 520) in Nizhny Tagil, in his book “My fate — Nizhniy Tagil” recalled those years: after that meeting, “began grouping developers. Despite the reluctance of A. A. Morozova a new business, it is to him first connected the developers of rockets J. Kotin, on the contrary, burned with a desire to install missiles in the tank. He also picked up associates. Organized team and the chief designer of the Chelyabinsk tractor plant p. P. Isakov. I was left with nothing to do. I was just “not enough” firms-developers of missiles. Naturally, I became excited and was aloud to resent discreditation attitude, gbtu to our KB. Suddenly, sitting next to a stranger said, “And let’s try and we are with you!”. This man was Alexander Emmanuilovich Nudelman, a well-known designer of aircraft automatic weapons of the war years, who decided to convert their KB for the creation of anti-tank missiles. He asked me to connect it to the consultant on future rocket firm of academician A. A. Raspletin.
Conceived by V. A. Malyshev the Resolution of Council of Ministers of the USSR issued a long time and was published only in may 1957, after his death.”
A. A. Morozov, skeptical about the idea of “missile” tank, from the task virtually eliminated. Chelyabinsk and Leningrad were treated the matter more interested and tried to create a “missile tanks” (this name insisted J. Kotin) on the basis of their experimental machines (objects 757, 772, 775 282, 286, 277, 278). However, the triple load — simultaneous lapping of the tank and the installation of a new weapons with automatic reloading — was for them unbearable. All these teams developed missile tanks never went beyond the creation of prototypes.
The only accepted on arms manufactured and commercially, was the rocket tank the it-1, created in KB of the Ural car-building plant. F. E. Dzerzhinsky in Nizhny Tagil under the leadership of L. N. Kartseva.
When working in a new direction in KB Uralvagonzavod decided to create missile tank based on serial instead of a gun to install missiles, placing it in the newly designed fighting compartment.
The major subcontractors managed missile weapons in the initial phase was OKB-16, and KB-1 led by A. E. Nudelman and A. A. by Rsplatinum. Subsequently, all the work on the control system of the tank controlled a missile (TOURS) led CB-1 of the State Committee on radio electronics under the guidance of A. A. Raspletin. Chief designer of the rocket complex has been designated by A. I. Bogdanov; the control system of the complex was engaged in Y. P. Yakovenko, shell — D. L. Tomashevich, in addition to which along with CB-1 work was carried out in the CDB-14 (instrument design Bureau) under the direction of chief engineer B. I. Chudolinska. Sighting devices for the complex was developed in CDB-393 (CDB KMZ). Work on missile guided weapons, dubbed “Dragon”, was held under the theme № 2. 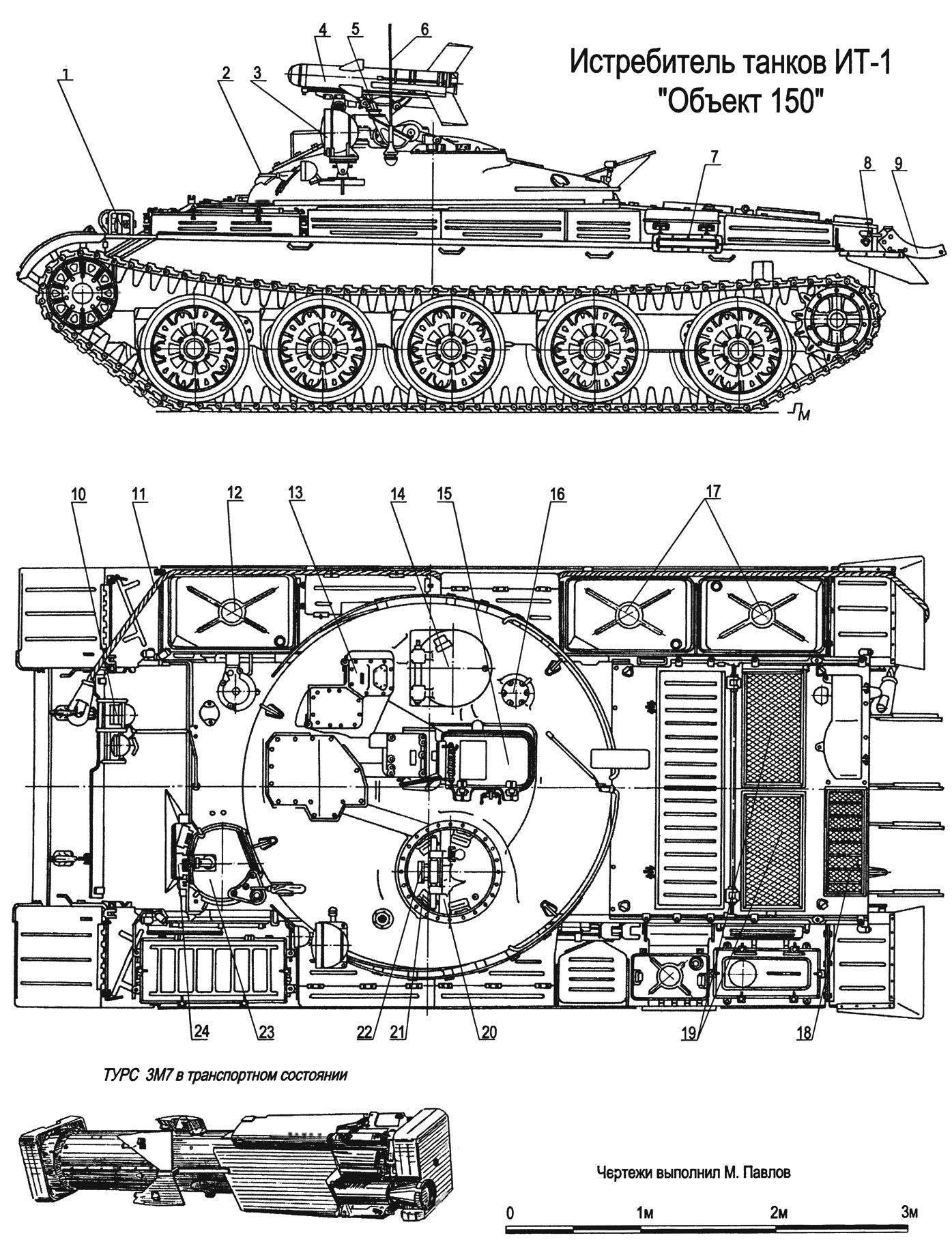 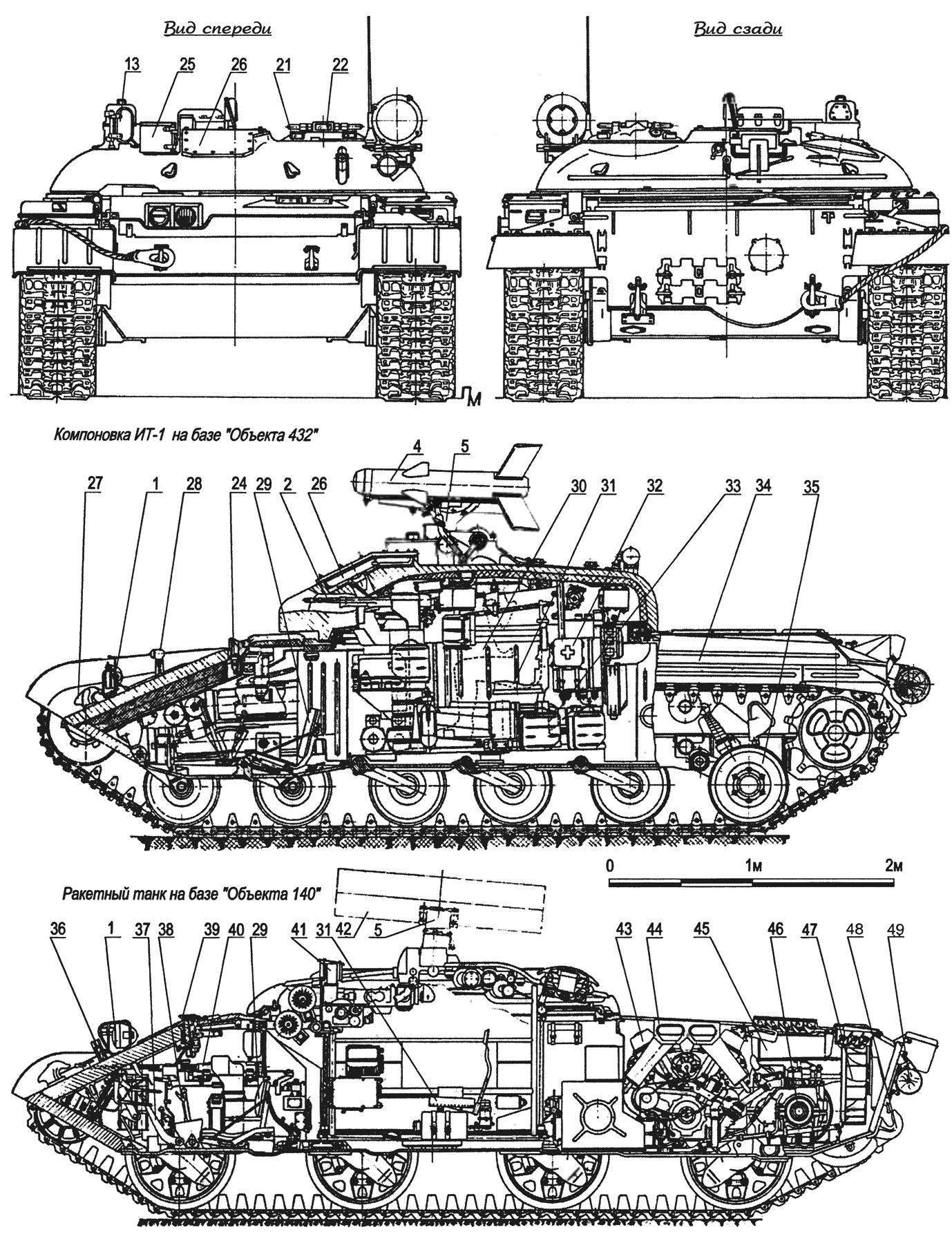