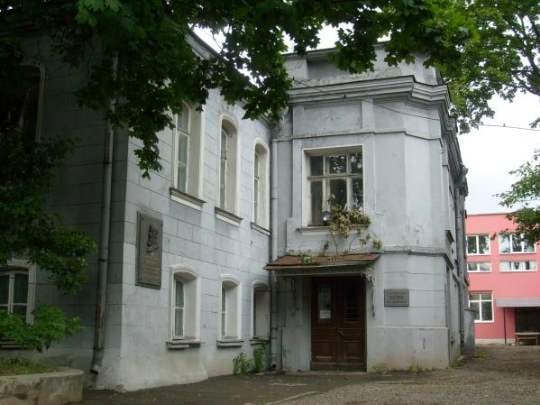 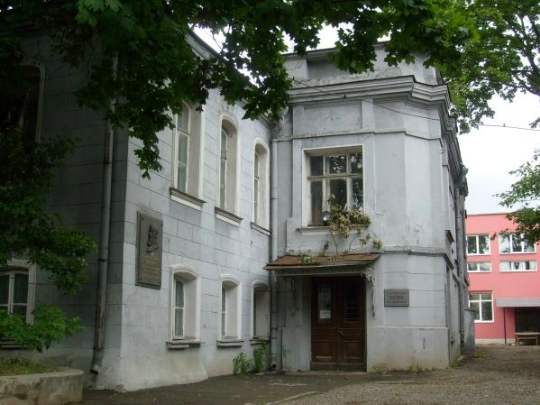 “Man will fly, based not on the strength of his muscles and the strength of my mind.”
N. E. ZHUKOVSKY
Here much has been preserved from the Moscow of the thirties. Run down, then climb steeply uphill streets and houses stick out over the smokestacks, brings a breeze from the streaming channel, pohramyvaet at the turn of the tram. In General, Moscow Moscow: business, colorful, with a stream of hurrying people. The appearance of this corner of the capital associated in our minds with industrialization, the great era of change, unprecedented labor enthusiasm, creativity and discovery. And as a symbol of those years, high above the roofs of the propellers of TSAGI. Central hydroaerodynamic Institute is one of the firstborn of Soviet science and technology, created on the direct orders of Lenin.
Next to its workshops and laboratory buildings to shelter a small two — storey private residence- Scientific-memorial Museum named after N. Ye.
A fascinating exhibition is housed here. She talks about the first steps of Russian aviation and especially about the life and work of the founder of the theory of Aeronautics Nikolai Yegorovich Zhukovsky. On the shelves dozens of works of the scientist devoted to open them physical law about the origin of the lift force surveys in the field of mechanics and aerodynamics, books on the history of science: Newton, Sophia Kovalevskaya, D. I. the Mendeleev.
A range of scientific and practical activities Zhukovsky extremely wide. So, along with the theoretical developments of the scientist involved in the problems put forward by life itself. He decided, for example, the original applied problem of hydraulic shock in water pipes. He was given an honorary degree in mechanical engineering. Zhukovsky especially valued this diploma, because in his youth he dreamed of becoming an engineer, and just a coincidence (in Moscow at that time was not higher engineering school) brought him to St. Petersburg University of physical-mathematical faculty. 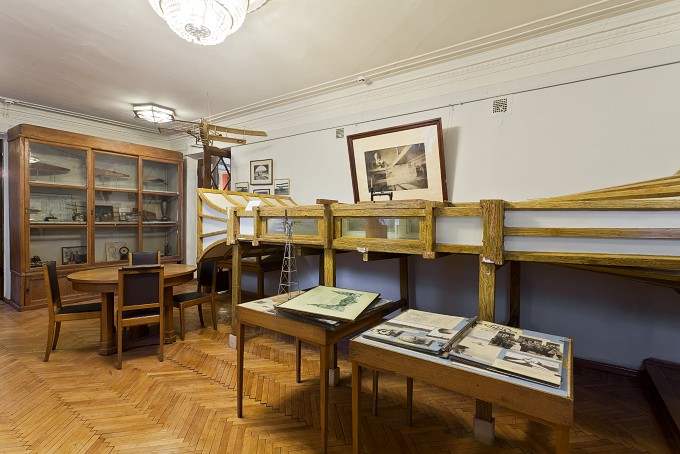 Diverse pedagogical practices and Nikolai Yegorovich: first, the teaching of physics in high school, then lecturing at St. Petersburg University and Moscow higher technical school.
In those years when Bauman acted aeronautic club. The members of K. A. Tupolev, V. P. Vetchinkin, B. N. Yur’ev, G. X. Sabinin and others under the guidance of Zhukovsky carried out the first theoretical and practical research in the field of Aero – and hydrodynamics, building the first model made its first flight on homemade machines.
In the halls of exhibits related to the work of the aeronautic club. Models of the first wind tunnel, which allowed to abandon the empirical method of test of flying devices. Pipe gave the opportunity for laboratories long before flight tests to verify and investigate the properties of the structures, their behavior in flight.
Here we see the model is built B, H. Yuriev helicopter, for which he in 1912 at the international exhibition of Aeronautics and motoring was awarded a gold medal. Schematic diagram of the swashplate proposed Yuriev, now adopted in all modern helicopters.
Very curious is represented in the Museum collection of the first aircraft. Here are some of them: the Wright brothers ‘ plane (the duration of his flight was about 59 seconds), “Neopor-1U” design Ya – GAK-Kehl, on which Nesterov made his “loop the loop”, flying boat Grigorovich, reconnaissance aircraft, M-20, participated in the civil war. and many others.
There is a Museum and a truly unique piece — one of the gliders of Otto Lilienthal, presented his Zhukovsky, Even in the homeland of the pilot has not survived. Similar whether on a pterodactyl, or bat wings, he reminds me of a modern hang gliders, which are now so popular with enthusiasts planning flights.
From the simplest machines to the modern sound of jet aircraft aircraft for a relatively short period of time has come a long way. A worthy contribution to the development of aviation has made and TSAGI.
Berezhko is preserved in the Museum of everything connected with that old Soviet research institution.
In a modest room with a fireplace and a motley furniture December 1, 1918, occurred the first meeting of the Board of TSAGI under the chairmanship of N. Ye. Here gathered a group of scientists to create new industry — aviation.
The eighteenth year… Famine, destruction, civil war. However, the thoughts of these people were looking to the future. And here in TSAGI, the dream was translated into concrete action. Studies conducted by scientists of the Institute in the field of Aero – and hydrodynamics, strength of structures of aircraft engines and propellers, became the scientific Foundation for production aircraft. The stands of the Museum in detail about the activities of the Institute, scientists, designers — creators of the wonderful machines, the test pilot.

Models of the first Tupolev aircraft, which became legendary thanks to the numerous world records for distance, altitude and duration of flight.
The first versions of helicopters and gyroplanes A. M. Cheremukhin and A. V. Kuznetsov.
Snowmobile designed by Tupolev—a wonder in those days, faithfully served the researchers of the far North.
In those years a small hall where is the exhibition dedicated to the history of TSAGI, due to the lack of the workshop was used as a shop. In order to get the finished car into the yard, I had to disassemble the wall between the Windows and then to transport it to the flight test. How different this room is for those shops giants, which in our current representation associated with the aviation enterprise.
The policy of industrialization of the country led to the rapid pace of aircraft development. Built a new aircraft, engine and aggregate plants, was thoroughly renovated and transformed all the old enterprises. Every year an increasing number of young design team, organized the new KB and the creative team at aircraft plants.
One section of the Museum reflects the main directions for the leading design bureaus of the aviation industry of our country. In showcases placed models of the major brands of the aircraft produced by groups under the guidance of A. N. Tupolev, N. N. Polikarpova, O. K. Antonov, Sukhoi, Lavochkin, Yakovlev, Mikoyan, Ilyushin, helicopters KB Mil, N. I. Kamov. Design, together with the most typical and successful, give a visual representation of the trends, the styles, the originality of each band, each. constructor. You can come here to learn and develop creative thinking, you can marvel at the diversity of the search, to admire the perfection of the incarnation of human thought in the technique.
About cars can be found in the Museum of Zhukovskiy, but about people. Their biographies are as bright as their creations. Documents, photographs, books tell about the life of prominent Soviet scientists: Chaplygina, Queen, tihonravova, Keldysh, former members of the ballooning circle Vetchinkin, sabinina, Stechkin, and many others whose names are inscribed in Golden letters in the history of Soviet science.
The Museum is not just frozen history. Here there is the link. Familiarity with the past gives you the opportunity to see more clearly the future, choose only for life profession, favorite thing.
There is a Museum of the study of physics. Here come the students to better understand program material. Using a miniature wind tunnel demonstrated experiments related to the streamlining of bodies depending on their shape and speed of the air flow. Sitting in this pilot’s seat, can “really” to pilot the aircraft — great model, fixed under the ceiling. Literally tear the guys from catapult to launch aircraft models that perform direct, undulating flight, and even loop the loop. And who knows, maybe it’s their first small steps into a large aircraft…
As quiet as it should be in the halls of the Museum, just a steady, barely audible hum coming from buildings TSAGI — big neighbor small Museum. Come here and you will see and hear many interesting things. The door to this house is always hospitably open.
L. STORCHEVOY