The twin-engine helicopter model. The creation of radio controlled model helicopters is one of the most difficult types of modeling. So complex that at the present time, almost nobody makes such models on their own — specialized firms took over the manufacture of precision parts and assemblies of model helicopters, and the athlete can only collect from a set of parts complete the model and learn how to manage it.

However, it was not always. The first model helicopters were a much more simple design that could make any Modeler of average level. One such rotary-wing models — Cordova the gyro — recently described in our journal (see “M-K” №11, 2003). In this issue we introduce the readers with one simple aircraft — Svobodnaya model helicopter, whose main rotor is driven in rotation mounted on the blades compression engines with propellers.
Full-sized helicopters such schemes were developed at the dawn of aviation, designers attracted her to the fact that during the rotation of the main rotor was not having the reaction torque is allowed to do without a tail rotor or a second rotor rotating in the opposite direction. However, the benefits of such schemes was reduced to nothing because of the huge mass-inertial characteristics of the rotor. In fact — imagine a pair of 100 HP motors with propellers, installed on the rotating rotor blades! But at model sizes, this scheme was quite workable (the influence of scale effect!), and with 1950-ies competition modelers-pilots take their rightful place in the calendars of aviamodelling competitions of all levels.
Later, with the advent of maneuverable RC mini helicopters, rotorcraft Svobodnaya was excluded from officially sanctioned — only magazine “modelist-Konstruktor” was supported by enthusiasts of this type of modeling in the framework of the annual competition “Experiment”, the organizer of whom was a member of the editorial Board of “M-K” candidate of technical Sciences I. K. Kostenko. 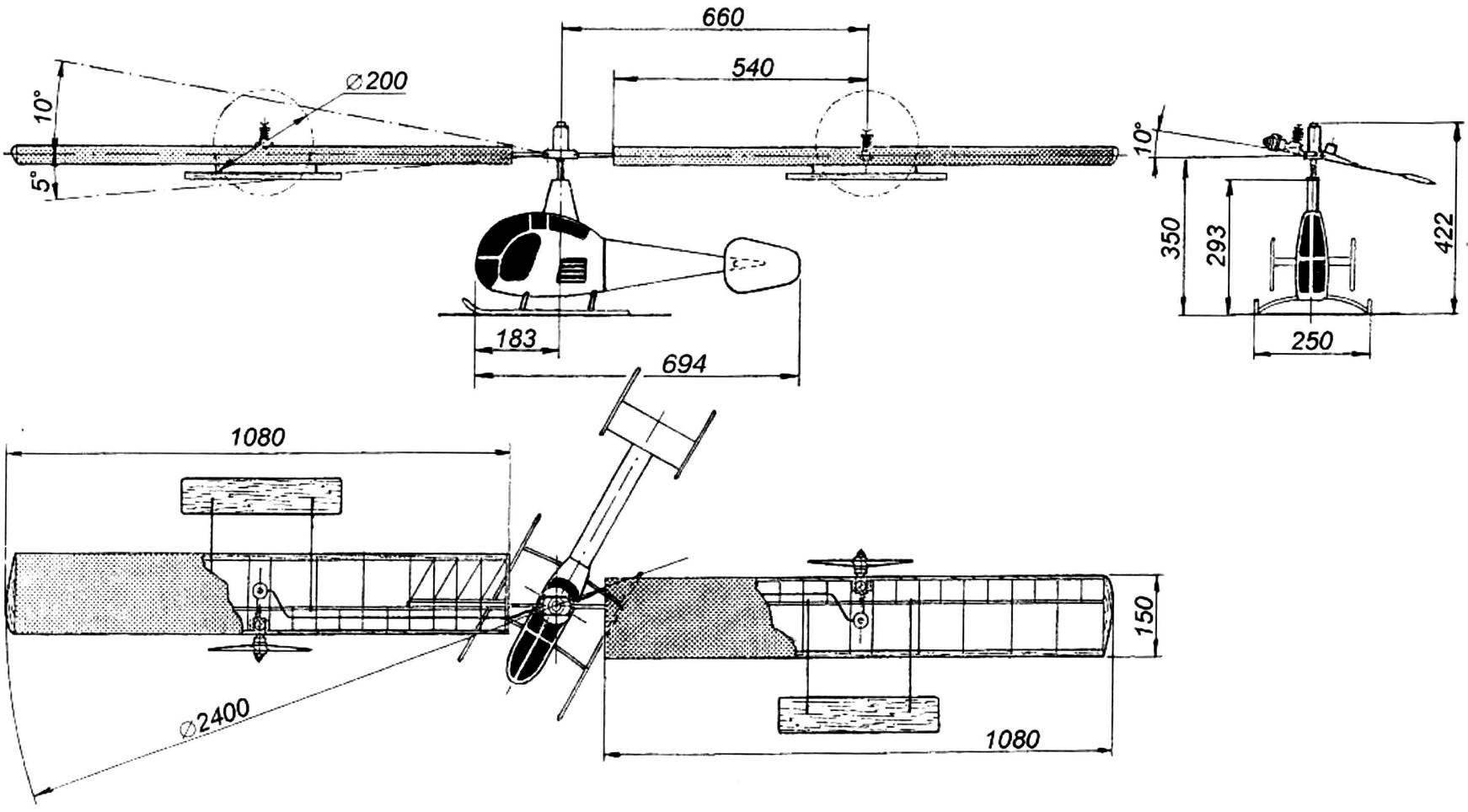 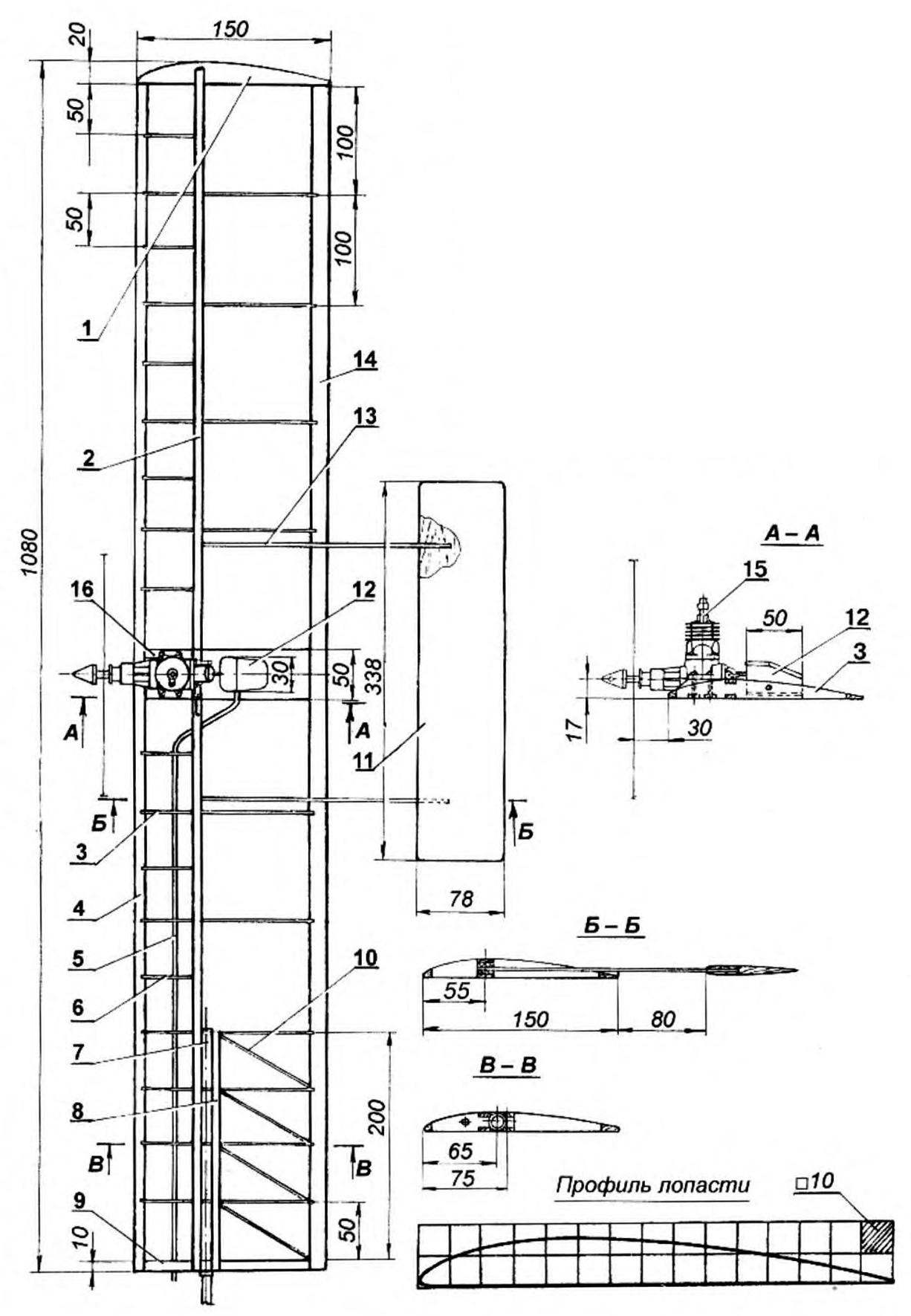 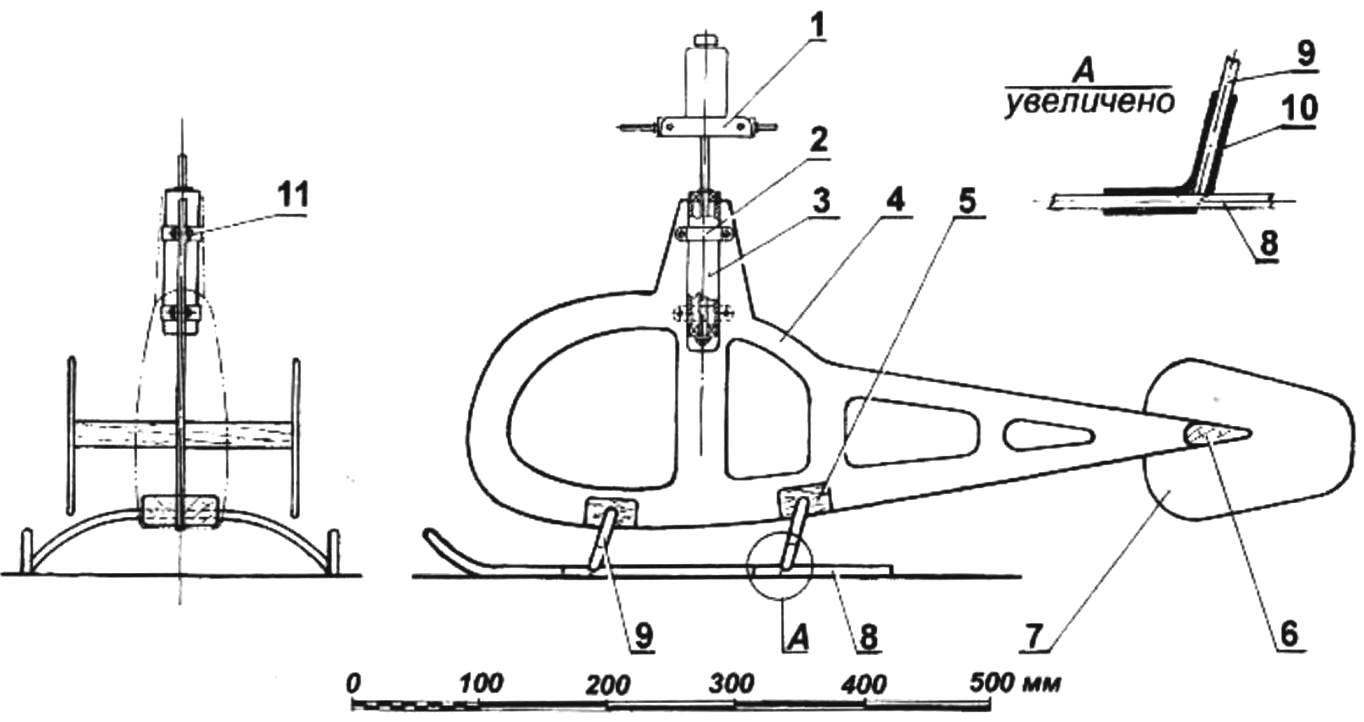 Fuselage Assembly:
1 — the Central hub of the rotor; 2 — the clip on the bearing considered; 3 — the bearing Central rotor hub; 4 — base of the fuselage (plywood s4); 3 — boss mount spring chassis (birch); 6 — crossbar (balsa); 7 — keel washer (balsa, plate, s3); 8 — ski chassis (aluminum, pipe 6×1); 9 — spring chassis (aluminum, pipe 6×1); 10 — connecting element (polyurethane tube); 11 — a bolt with M3 nut (4 set).
Svobodnaya model helicopter is an aircraft with two-bladed rotor, each blade of which is mounted a compression type engine KMD-2,5. The rotor rotates freely in the bearing Assembly embodied in the simplest fuselage.
The rotor model resembles a pair of cord “bizovac” linked hard Konami, and each of the blades by design, no different from the wing of the airplane. The blades are fixed in the Central hub of the screw is articulated with an axial and horizontal joints. Balancing each of the blades is performed using the horizontal tail stabilizer mounted on two beams of duralumin spokes with a diameter of 3 mm.
The power supply for the motor is from a consumable fuel tanks, installed directly behind the engines. Feeding them is made from a Central tank mounted on the axis of the Central rotor hub.
The propeller blades made according to the classic model when dealing with ribs, lomikami, dvukhpolosnykh spar, and the front and rear edges. Plating — metallized Mylar film.
The Assembly blades are in the stocks, which is a flat Board of appropriate size, which stuck Plaz — the drawing of the blade in full size. In the process of assembling the frame from sticking to the paper, the latter is closed thin plastic film. Along the front and rear edges of the slats are fixed, limiting the size of the blade width.
Ribs are cut from the plates of lightweight basswood with a thickness of 2 mm. Below all of these parts came out of the same, I suggest to use fixture consisting of a pair of templates of a profile made of a sheet of aluminum 3 mm thick, and two long bolts with M5 nuts. With their help billet ribs are pulled together in a package and are then processed together — this is best done by using sharpened to razor sharpness of the knife with a smooth blade.
The shelves of the spars and the edges are made of pine slats. 3 the root portion of a frame of the blade is reinforced with an extra spar, an increased number of ribs and braces. Between the spar is glued in long sleeve with the axis of the axial hinge of the blade. The bushing is best done from the segment of the dural tube or applied to the wall of the fiberglass and epoxy binder on a suitable cylindrical mandrel, the axis of duralumin rod with a diameter of 4 mm.
In the Central part of the blades fixed motor mount made of lime, with a fixed engine KMD-2,5 and soldered tin plate 0.3 mm thick expendable fuel tank. Polyurethane tube fuel line connecting the fuel tank with the expenditure of Central, is to be laid through holes drilled in the ribs of the blade. The mounting pad on Motorama located under the shelf engine mounts, should be reinforced beech plates 3 mm thick.
Covering of blade — Mylar film (the best look of the blade covered with tape with mirror coating); cover this material scaffolds produced according to the traditional model of technology with glue BF-2 and a conventional iron.
Stabilizer — celeberty, from plate thickness of 4 mm. As already mentioned, wing stabilizer connects using two aluminum knitting needles with a diameter of 3 mm — bending them. you can change the installation angle of the stabilizer, which in turn allows you to adjust the angle of attack of the rotor blades. The optimum angle of attack of about 10 degrees.
The base of the fuselage is a plywood plate on which is mounted the bearing Assembly of the rotor, chassis and stabiliser. The bearing is a segment of the dural tube, which is made grooves under ball bearings No. 26. On the fuselage this node is fixed with the help of a pair of aluminum clamps, bolts with thread M3 and nuts. 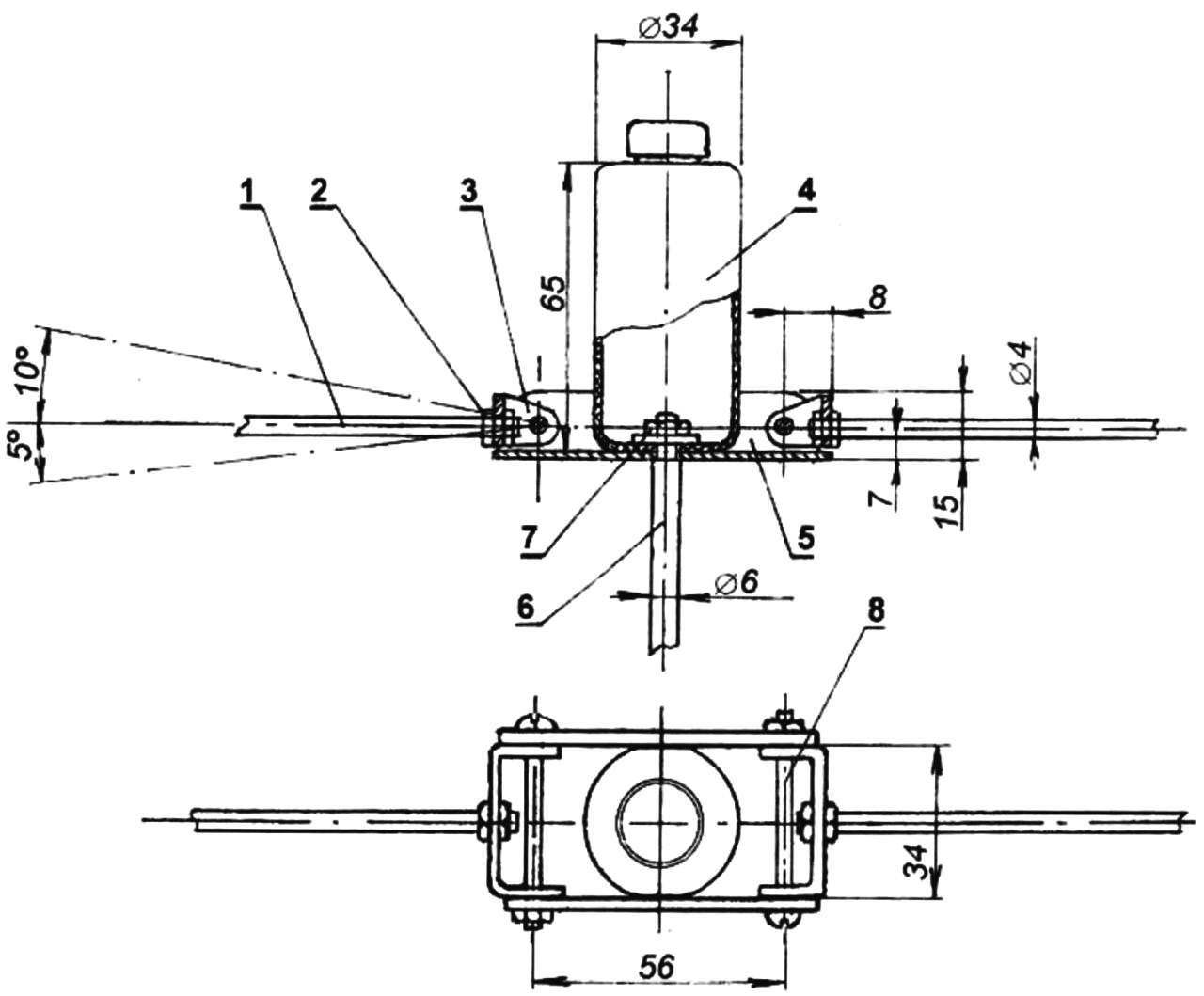 The bearing of the rotor:
1 — shaft nessel screw (aluminum); 2 — bearing housing (aluminum, rough 22×2.5); 3 — ball bearing No. 26; 4 — the fastening elements (nut and M4 washer)
Cross member and keel washers — seleblitie. Spring chassis bent from dural pipes in diameter 6×1 mm, are fixed in bosses, glued to the base of the fuselage. Springs and ski chassis are connected using polyurethane tubes. After Assembly to the frame and glued the foam sidewall. Thus prepared vyshkurivaetsya fuselage, primed with epoxy glue, align the two-component automotive putty, again vyshkurivaetsya and painted with enamel.
The Central sleeve consists of a body, bent from duralumin with a thickness of 2.5 mm, the two forks of the same material hinged to the body, as well as the Central fuel tank made from a plastic cylindrical bottle from-under medicines or cosmetics. By the way, before Assembly, it is necessary to check whether the insoluble material of the vial components of the fuel.
It should be mentioned that conditions of the competition “Experiment” Svobodnaya model helicopters was to have a timer that limits the time of flight of the model. However, for the demonstration flight this device to be installed is not necessarily enough when you start to fill the Central tank portion of the fuel at a certain time of flight from three to five minutes. When you stop the engine the model is quite stable authorative, with swiveling blades automatically reduce your angle of attack.
I. SILVER