In the history of the world Cup on aviamodelling sports, this has not happened; 42 athlete speakers with models of gliders, after seven rounds was the maximum number of points — 1260. Many models are specifically prepared for particular weather conditions of Bulgaria — the absence of wind, a weak upward flows. The results of the efforts had an immediate effect. Only the eighth tour has revealed the contenders for first place: canadian modelers Peter and Almut Soviet — Victor chop. The winner was decided in the tenth.
Starts were given in the evening. Find heat flows at this time is particularly difficult. Signal rockets both athletes tighten their models. Canadian, it seems, caught an updraft, and drops the guard rails. But the way planning model, it is clear that the result will be low. At this time Victor “probes” the air, looking for “thermals”. At some point, he felt it in the suddenly increased tension of the handrail and threw it, perfectly using a dynamic start.
The airframe of Almut landed in 2 min 15 s Model of chop, almost dropping the small turns flying for about 15 min.
After measuring the model and its weighing of the technical Commission, officially called the Soviet athlete Viktor chop, for the first time participating in the international competitions, world champion in glider models.
Exactly came to the eighth round timerity E. Verbitsky, V. Mozyrsky and S. Shireen. Together with other participants they had at 1260 points. The fight was intense. This is evidenced by the fact that by the end of the eighth round, like glider pilots, 37 athletes had the same results, and the ninth — 21. The winner was decided in the tenth round. It was the Swede L. Olafson. The time of flight of his model with four-second the engine is running, 2 min 30 s. Only 10 lost to him E. Verbitsky, who was the silver medallist. Bronze medal — M. burns (Canada). Command victory was won by athletes of Austria in second place with Czechoslovakia, the third — our model airplanes.
The competition rezinomotornaya models the intensity of fighting was somewhat less, but here, the winner became known only in the tenth round — 5 min 3 stayed in the air for model PEK Chang-sung of the DPRK. He was awarded the gold medal of the world champion.
Unfortunately, our athletes in this class was bad — the team in 18th place, and the best result — 1192 points shown I. Silberger, match 38-th place.
If to speak about directions of development of the expense of building a traditional class of models, it is appropriate to give the senior trainer of a national team of the USSR, the deserved trainer of RSFSR V. F. es’kova: “gliders observed well defined scheme; wingspan of about 2000 mm, the chord—145—150 mm, shoulder — 700-720 mm. Almost all models are equipped with hooks for dynamic start. They are quite justified. Have rezinomotornaya models several design schemes. Some with bead fuselages of rectangular cross section. A distinctive feature of the models of prize-winners — simplicity and reliability. The disadvantages of the Soviet model modelers should include a small time promotion screw — 30-33 with the soaring and low quality. 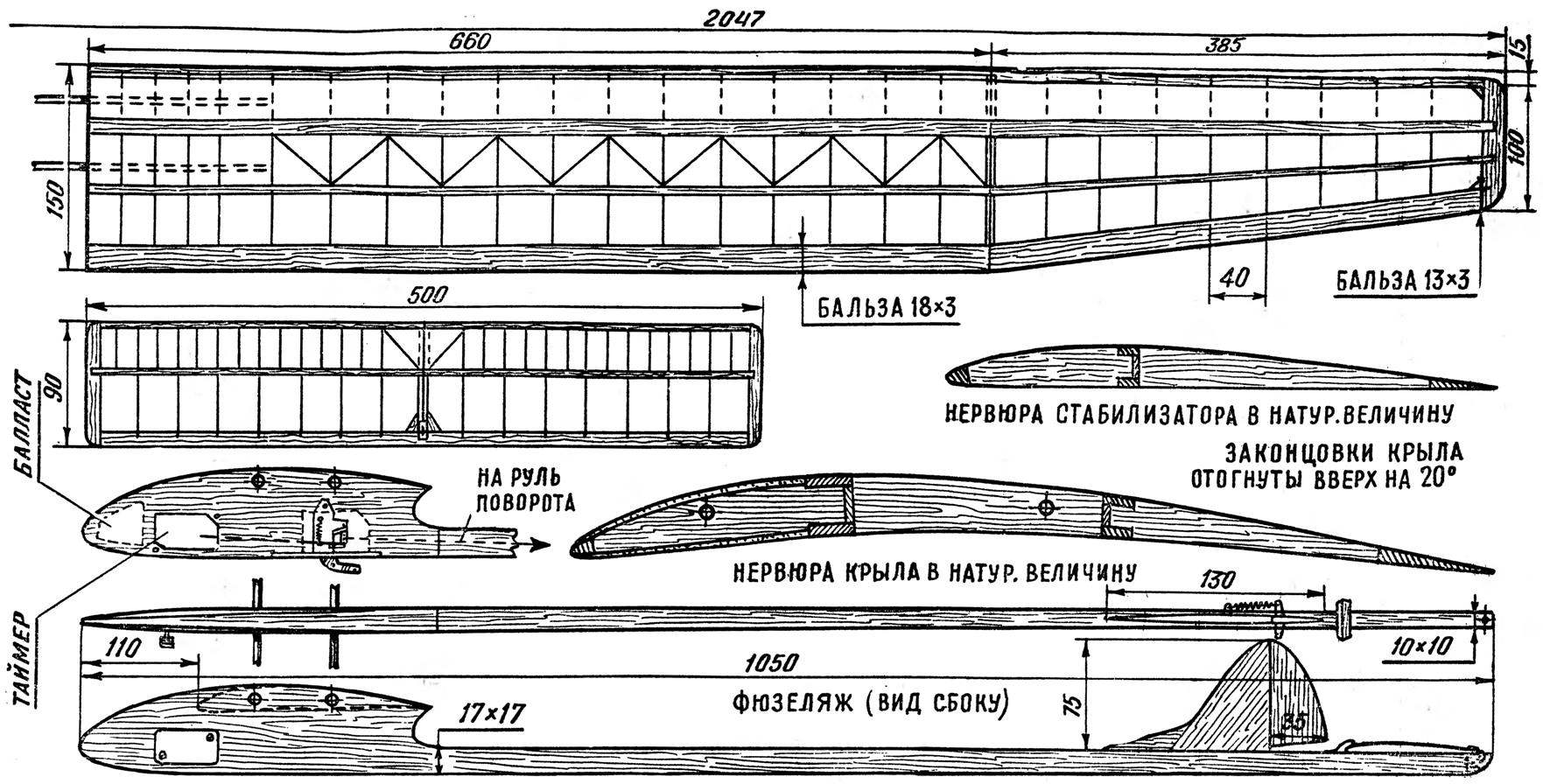 Drawings of a model glider A-2
The height of the takeoff of our models 10-15 m more than other athletes, but they do not have the ability to plan in descending streams. In this class we have to reconsider our position based on the results of last superiority”.
Some simplification has been at the timer models. Many athletes abandoned the excessive mechanization. Against this background stood out the model T. the fire (Denmark), equipped with electro-mechanical timer. The transition model of the motor of the flight in plan (horizontal)
is a deviation of the stabilizer at a negative angle rather than a rudder, like most models. Private flights went well, but in conditions of high nervous tension to operate such equipment was difficult. And smashing two models, the Fire after the second round stopped the match.
An interesting novelty was shown at the Dutch Championships model airplanes. On the models of gliders they used radio transmitters that are permanently sending the broadcast signal received by the receiver. This allows to detect the model landing in the woods, in tall grass. Weight miniature transmitter with power — 25-30 g.
Brief technical characteristics of the model glider A-2 world champion 1975 Victor chop
Length, mm……………………..1050
Wingspan, mm………….2047
Area, DM2:
wing……………………………29,35
stabilizer……………….4,5
bearing surfaces…..33,85
Weight, gg
wing……………………………125
stabilizer……………….12
fuselage……………………..275
R. VIKTOROV