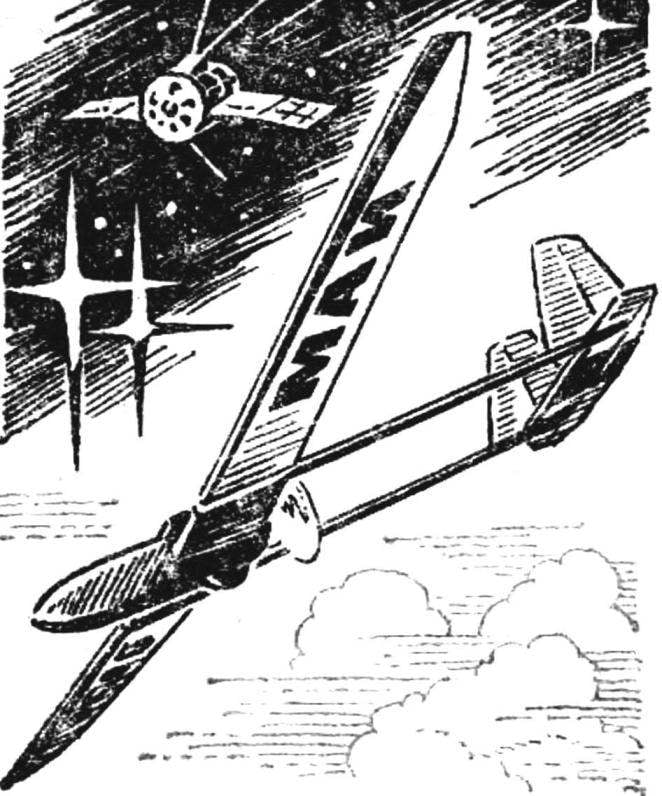 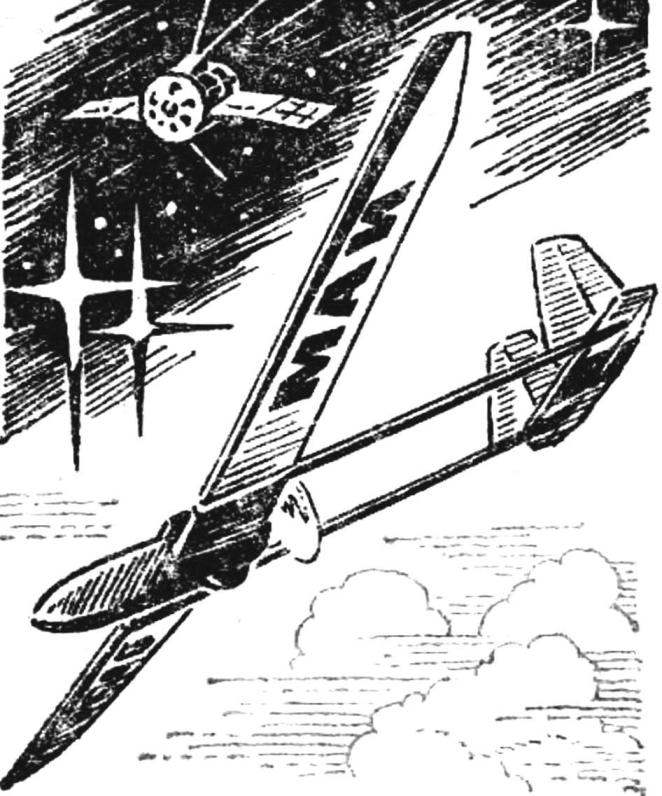 Fleeting College years. Five or six years of hard study — and the production comes a new addition of qualified professionals, which requires not only informed decisions, but also creative, with zaglada for the future approach to self-charged with the first case.
How to compress the time allotted to study in the University, how to increase its efficiency? One of the most effective ways in familiarizing the student with the first days of stay at the Institute to scientific and technical creativity. That this direction brings the best results, according to exhibit scientific and technical achievements of Soviet students in the Central exhibition NTTM-82, who worked at ENEA USSR. And perhaps most notable here was the exhibition of the Moscow aviation Institute — a wide range of original designs ranging from adjustable reversible small clock screwdriver and ending with the RC helicopter.
What are the exhibits on the stands reserved for the famous institution, attracted the most? The focus was on products such as analog-to-digital complex device for locating cracks in materials, solid-state microwave generator, low pressure chamber high pressure for physicians. And especially a unique instrument for the diagnosis of diseases of cattle. With it, veterinarians, measuring electroarmature of biologically active points of a living organism, for 20-30 minutes can fully explore it and to identify functional disorders. Such a device, incidentally, is already used in the Moscow veterinary Academy of K. I. Skryabin.
What students purely technical University undertook the development of a seemingly unusual subject, is not surprising. According to numerous exhibitions we remember are their well-known developments as the plane “quantum”, which established five world records, satellites of the series “the Radio”, a plasma generator for active experiments in the ionosphere, marked by diploma of the International Federation of Astronautics, a series of radio-controlled aircraft for the national economy, underwater vehicles legkomolyabb (series Shelf), deep sea photo booth, small-displacement engines. Add micromachines and micro-motors, allowing to refuse from import of mechanisms of this type, energy meter, accuracy class which is significantly higher than heretofore known, and others.
Opinion of experts about them unanimous: any of these developments fulfilled at a high technological and professional level.
Another assessment to be and could not. All the IPA is directed to the formation of highly qualified specialists with high creative potential.
It is known that the expert approaches the problem comprehensively, is able to experiment and to make effective use of their results. The MAI has all the conditions to prepare engineers to meet these requirements.
In one only the United student design Bureau (OKB) the MAI 1800. Doing interesting work, implementing their technical ideas, they bring benefits to themselves and the Institute. In recent years, OCB repeatedly became the winner of the national contest of student design Bureau. These successes were appreciated! The Komsomol Central Committee awarded the Association of the Lenin Komsomol prize in 1980.
It is critical that scientific research, held under the auspices of the Council for scientific-research work of students (NIRS), which is closely linked with the educational process. The need for such a synthesis is substantiated by the practice of specialists ‘ training at this University.
Studies have shown that students who combine their studies with research work, have high academic performance. They are easier to master many disciplines, adapt to new requirements. “Introduction to science” going on here according to the fulfilled scheme. At first, freshmen in laboratory studies are so-called non-standard tasks that require deeper penetration into the physics of the phenomenon under study, find more information in the literature, as a course the students are encouraged to perform separate calculations of contractual projects included in the plan of the departments…
What gives? First, the real-life work experience. After all, the future engineer is entrusted a small part of the overall business. The consciousness that depends on collective success, it mobilizes, develops a sense of responsibility. Second, the need for a qualitative solution of the problem (and in time!) makes him a different attitude to learning. And finally, in the third, getting the initial skills, the student is much faster included in the research work.
Hence the growth of the real course and diploma projects and related studies in the total volume of student Affairs. In recent years, young researchers of the Institute made hundreds of presentations at the urban, national and international conferences, written numerous articles and reports, designed and constructed for the laboratories of the Institute more than one hundred teaching units, topics SLE secure about two thousand research papers and diploma projects.

For achievements in the organization of research work of MAI one of the first in the country was awarded the red banner of the Komsomol Central Committee and the Ministry of higher and secondary special education of the USSR.
At the Moscow aviation are constantly looking for opportunities for inclusion of students in research work and scientific and technical creativity. MAI was one of the first in 1979 to develop and implement a comprehensive plan for the development of creative skills, engaging students in NTTM since freshman year.
Under the plan, the departments participating in the experiment was for the entire period of study at the Institute of creative tasks in the field.
The first experience showed that without a hitch, the plan is implemented only on condition of close interaction of all participants. It was decided to extend this initiative to all departments. Currently in contact with the engineering departments developed an action plan to improve the efficiency and quality of organization of scientific-research work of students in the eleventh five year plan.
The interest of the University in the earliest formation of young specialists, striving to ensure that it started literally from the first days of his stay within its walls, led to the creation in 1979 of the Commission on technical creativity of youth (CTTM). By the way, MAI is known in the country not only as a leading aviation institution, but also as the head organization of the Ministry of higher and secondary specialized education in the field of youth career guidance. This case for the past six years, the Institute has a permanent Commission on vocational guidance. One of its divisions and became KTM.
That’s how he sees the main task KTM its Chairman Vladimir Sergeyevich Dubinin:
— Some types of technical creativity have extremely strong, so to speak, “professional orientation effect”.
Almost all guys, seriously engaged in modeling, we refer in the first place — tend to the aircraft. And we help them to realize this desire.
But first we have to find someone to help. How KTM is looking for those who dream of a profession in aeronautical engineering, equipment, working? For boys that are doing aeromodelling sports, “exit” is not so difficult: they are usually combined in a mug. The Commission sends them the typical options of entrance examinations. These guys can also take part in the scientific and technical Olympics, held in the Institute, and to obtain the right of enrollment, ceteris paribus.
In the direction CTTM students run circles of technical creativity, working outside of the Institute. So, sophomore Arthur Dudin leads the circle in the career of the Leningrad district, candidate master of sports Alexander Voloshenko, also a sophomore, leads a circle at DEATH-21. It is not surprising that almost all their students intend to enroll in MAI — affected by the personal example of leaders.
As a result of work CTTM among the documents filed in the Moscow aviation Institute in 1979 were 143 young technology. Next — 284, in 1981, already 340.
But it happens that the level of General education of the applicant are not sufficient for admission to the Institute. In this case, the Commission’s technical creativity has the opportunity to help the less “savvy” guys. The Institute has an agreement on cooperation with a number of enterprises, technical and vocational schools. The Commission directs the young man graduated from high school and are not enrolled in the MAI, work or study in the collaborating organizations. At the same time it provides the possibility of studies at the preparatory courses of the MAI for admission to the Institute the following year. Regardless of the place of residence of the applicant, as part of the collaborating organizations provides nonresident the hostel.
This assistance is available to all who are engaged in modeling, the construction of aircraft of various types, the creation of piston and other heat engines for moving models, radio control equipment, invention and innovation. As well as young men coming to the flight school, they can attend preparatory courses for the MAI in order to better prepare for the new exams.
For the guys that live in Moscow and the Moscow region and for whatever reason don’t go to school in the ninth grade, CTM assists to enroll in cooperating with the MAI technical and vocational schools. Winners of scientific and technical Olympics benefit when applying to these schools.
All this is done in the expectation that over time they will come in the MAI.
Concern about the quality completion of student ranks has also led to the creation on already existing at the Moscow aviation Institute the faculty of social professions of the section organizers and managers of technical creativity. It includes successful students are passionate about the hobby. In addition, they are involved in research work in one of the SKB or direct the group.
Throughout the education at the faculty the students are under constant supervision KTM and after MAI get, in addition to the main specialty of the organizer of technical creativity of youth.
But it’s after graduation. And while the students are learning, and modelers markedly more successful than others. There is no need to prove that such enthusiastic people grow up monolingual experts, really in love with the business.
Given this, the Board of the Ministry of higher and secondary special education of the USSR resolution “On the experience of the Moscow aviation Institute named after S. Ordzhonikidze on a professional orientation of young people” decided that the experience of the MAI will need to study and use in practical work on the organization of admission to universities.
…Factories, airfields, bureaus and research institutes, other institutions and even in space carry the workload graduates of the MAI. And well talking about! Therefore, everything that is done by the Institute for career guidance, placement and recruitment and training of competent and enterprising engineers, paid off handsomely.
A. TIMCHENKO