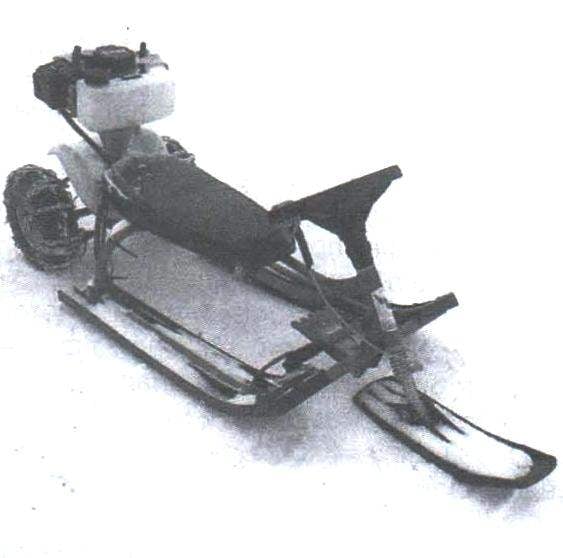 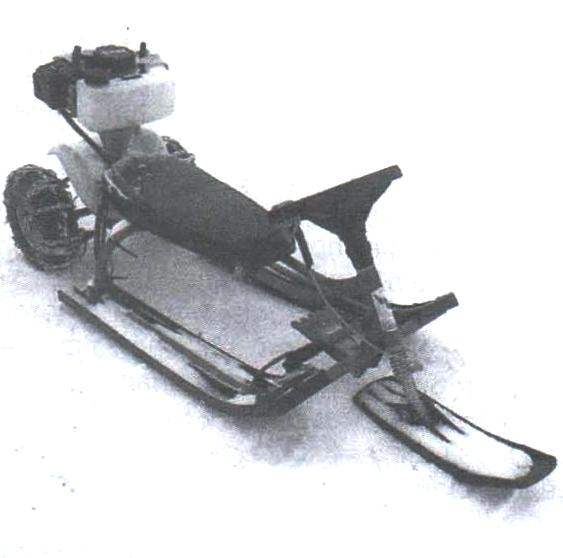 This wheel-ski mini-snowmobile I made for eight-year-old daughter. When the establishment tried to ensure the machine low weight and most importantly low speed, which in modern high speed engines have required a rather complicated transmission.

The sled consists of two Autonomous blocks: children’s snow and the power unit to it – from the tiller MD-20 “Caliber”. In an engine first wanted to use the caterpillar, but she “pulled” a substantial loss of power, increase in weight, complexity of manufacturing. So instead of cutters adapted a couple of wheels from the truck, “footwear” them in chains. The runners of the skis up relative to the contact patch of the wheels 30 mm to retrieve and engages the latter. The clutch on the power unit are centrifugal. Is the clutch pedal put a hole punch. Brakes not required – worm gearbox of the cultivator when you reset the “gas” ensures a quick stop of the snowmobile.
The entire work took only two evenings left to mount a backrest with a headrest to make it easier to sit without leaning on the gas tank.
The maximum speed of the snowmobile 12 km/h, and the daughter manages at full “gas” to turn with the skid. Machine “powerful”: quietly carries me even through the snow five centimeters thick.
In the spring and harvest the power unit is again put on the cultivator and it will work again for a summer plan to make him MOTOBLUR.
V. UNKNOWN, V. Karagay, Perm Krai