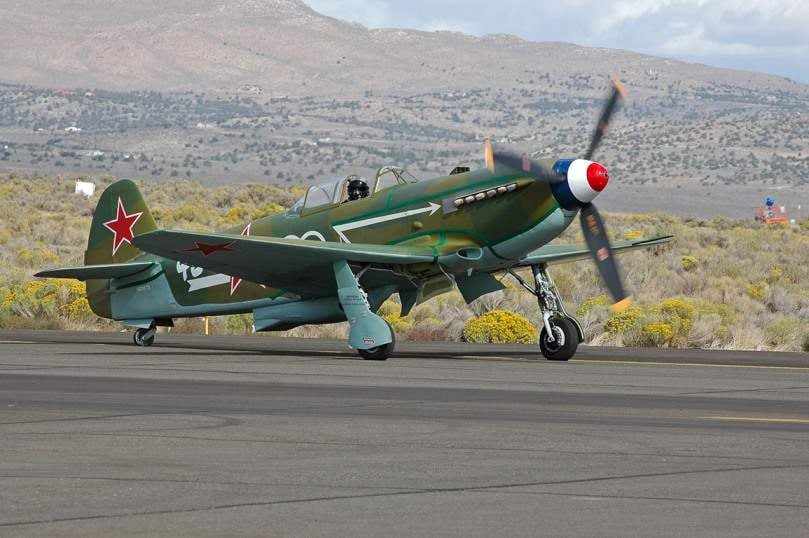 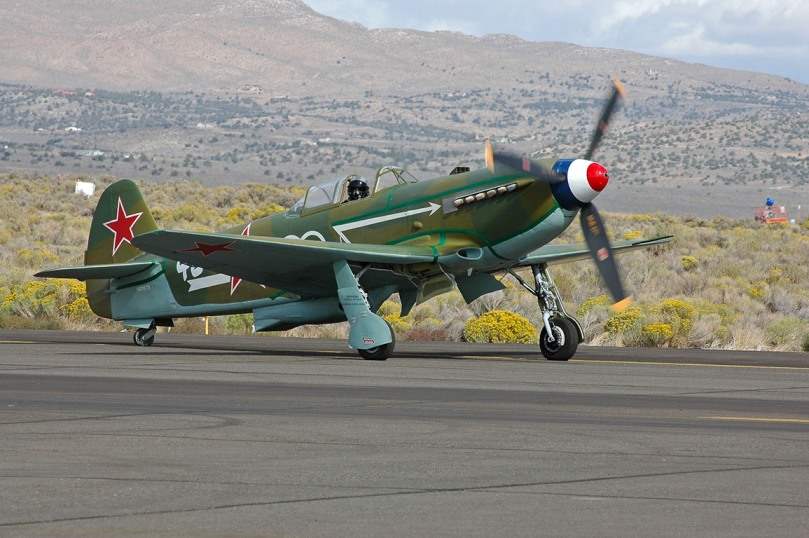 For more than six months of heavy fighting on land, at sea and in the air. The Soviet warriors and the creators of the weapons – designers of tanks, guns, ships and planes – accumulated front-line experience. Started in 1942…

Our military equipment created in the last prewar years, kept most difficult exam. In quantitative terms it still was not enough. Many factories were evacuated to the East. For their start-up to full capacity was required. Every machine, every detail was registered. The Supreme Commander personally distribute the aircraft between fronts.
In these harsh days the designers never for a moment stopped work on further improvement of machines, but all the improvements now made subject to the immutable law: a quantitative production of the aircraft in any case should not be reduced. So the design Bureau of A. S. Yakovlev followed the Yak-1 appeared the Yak-7, Yak-7B, Yak-7B, and finally, the Yak-9.
The main difference between the new fighter from the previous models were all-metal wing with duralumin spars, increased fuel capacity and lowered the fairing of the fuselage, the pilot opened out the back. Baptism of fire of the Yak-9 got in the sky of Stalingrad in autumn 1942.
OKB General designer A. S. Yakovlev as a precious relic carefully preserved Yak-9 who took part in the battles of the great Patriotic war. On this machine with 14 red stars on Board – the number of downed German aircraft – war commander of the regiment “Jacob” major Ivan Kleshchev. About him, and other glorious Soviet pilots with great respect and warmth C. A. Yakovlev recalls in his book “Purpose of life”.
The new fighter was the basis for a whole family of aircraft. So, one of the modifications was a heavy Yak-9T, and the word “heavy” refers not to the car, and determined the caliber of the gun, which was installed in the collapse of the cylinder V-type motor and provided extraordinary firepower. Suffice it to say that the shell fired from this 37-mm gun, could penetrate the 48-millimeter tank armor, and the aircraft and can not speak.

Camouflage Yak-9 is the same as the standard scheme of 1943 (the machines are already not covered in the winter white paint). The plane in the background has obviously been repaired and was enlarged markings. The three-digit side numbers on both fighters inflicted in the regiment and informed about accessories of the machines to an OU. Winter 1944/1945, 3 air army.
Outwardly the Yak-9T differed from the other car shifted to 400 mm back of the cockpit canopy. Moreover, the weight of the new aircraft has not changed, and for a fighter it is a question of paramount importance. In the future the Yak-9T was a gun caliber of 45 mm, and then the 57 mm.
Another direction of work on the Yak-9 was to increase range. The need for this grew greater than developing the offensive of the Soviet troops. The lack of prepared airfields in newly liberated areas, in close proximity to the front lines, continually shifting to the West, leaving our troops without air cover as the fighters could not be long enough to be in a war zone, spending a large part of the fuel for the flight from the airfield and back.
In those years most fully meet the requirements of the time the Yak-9D, which succeeded with minimal modifications to increase the fuel capacity from 300 to 480 kg, and the range is from 1000 to 1400 km.
On a modified Yak-9ДД the supply of fuel has already reached 630 kg. In the test flight test pilot P. Ya. Petrovi flew without landing 2300 km, which confirmed the calculations of designers. With almost all the growth range was able to obtain without the use of external outboard fuel tanks, as usually practiced, i.e., without compromising the aerodynamics of a fighter.
These aircraft showed his best side during an unprecedented flight to Italy over Nazi-occupied territory. Here in just the allies liberated the city of Bari, was stationed the division of the Yak-9ДД. She was escorted U.S. heavy bombers “Flying fortress” and “liberator” in Shuttle flights to the bombing of the oil refineries in Romania-occupied with landing on the airfield at Poltava. 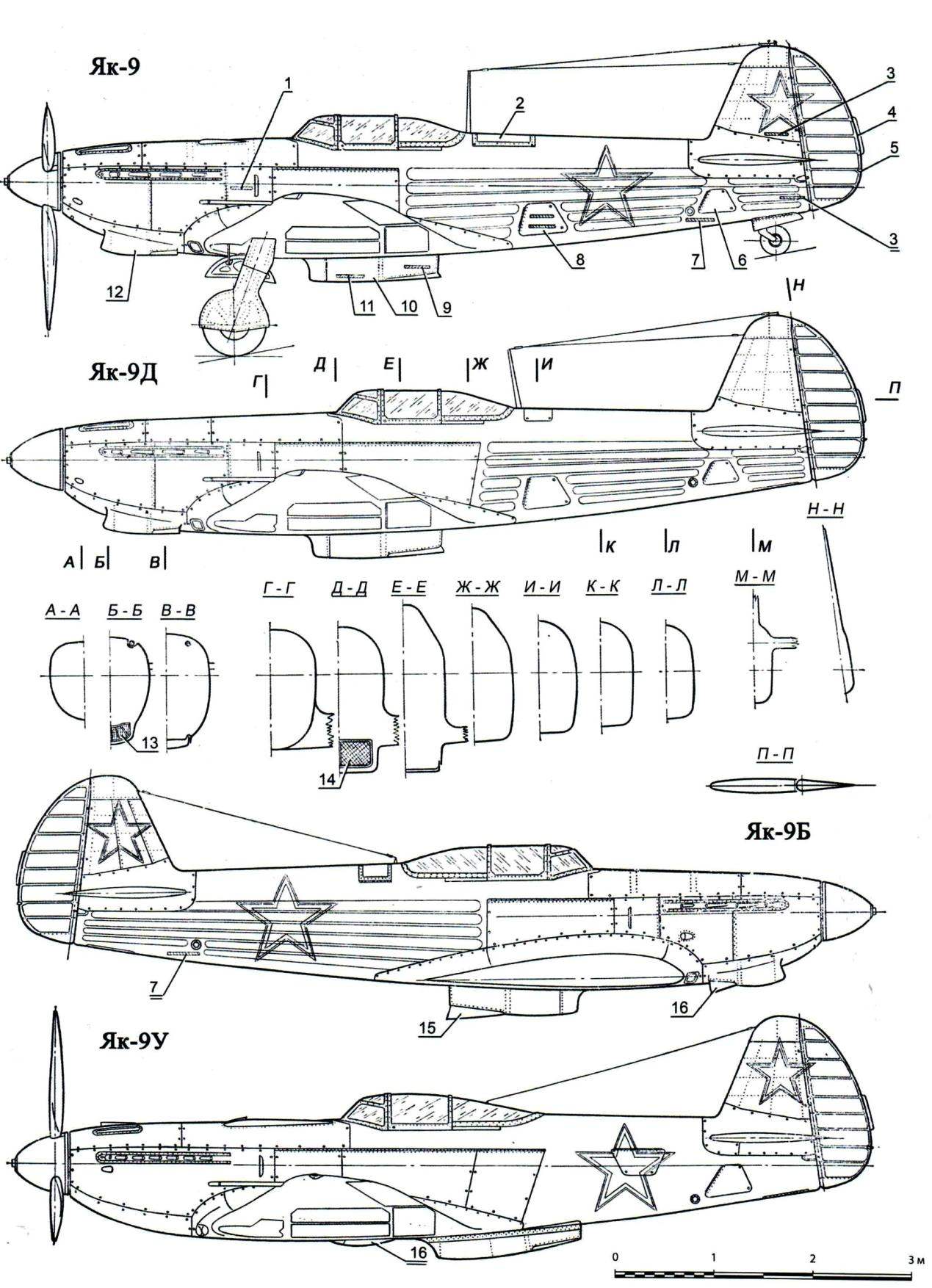 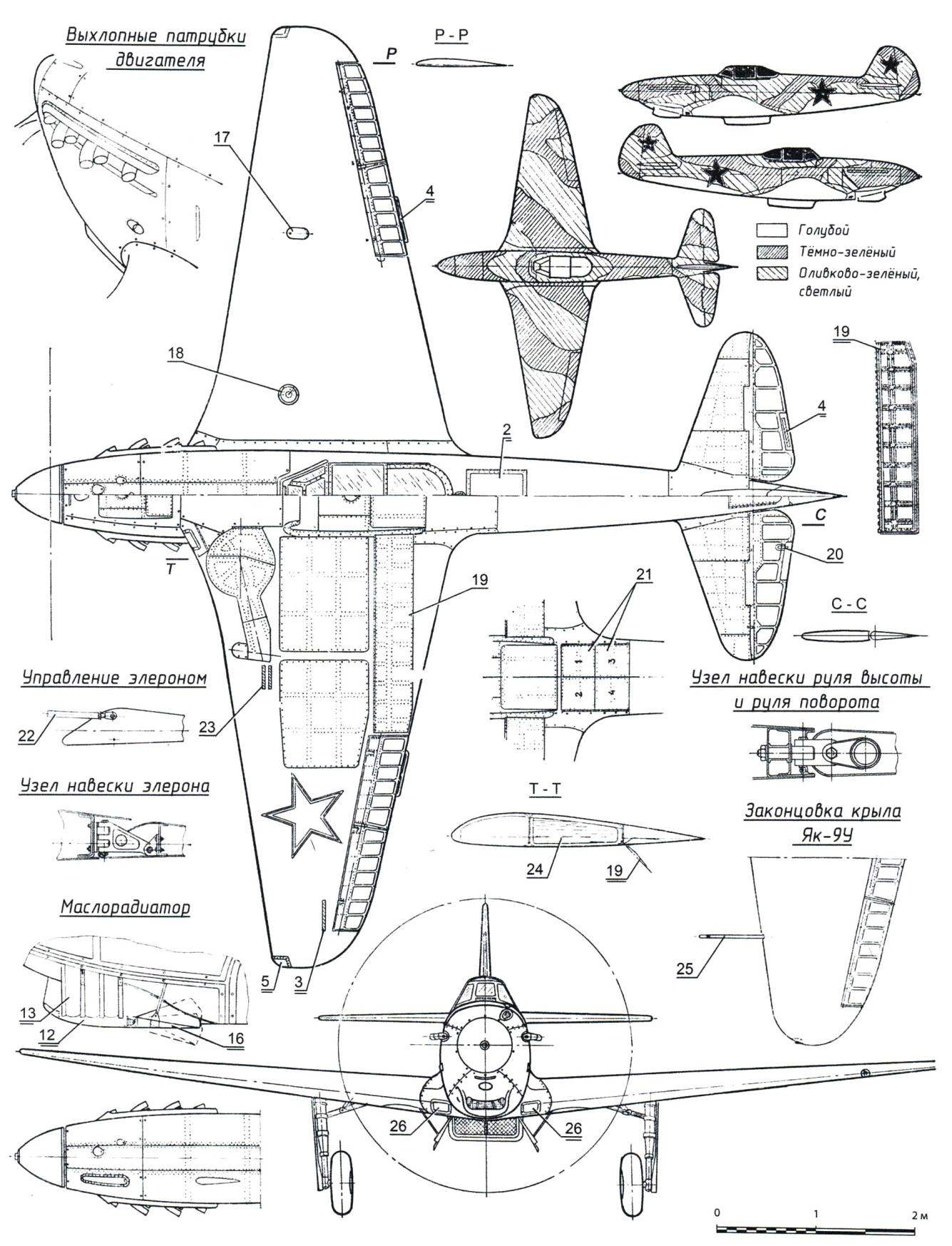 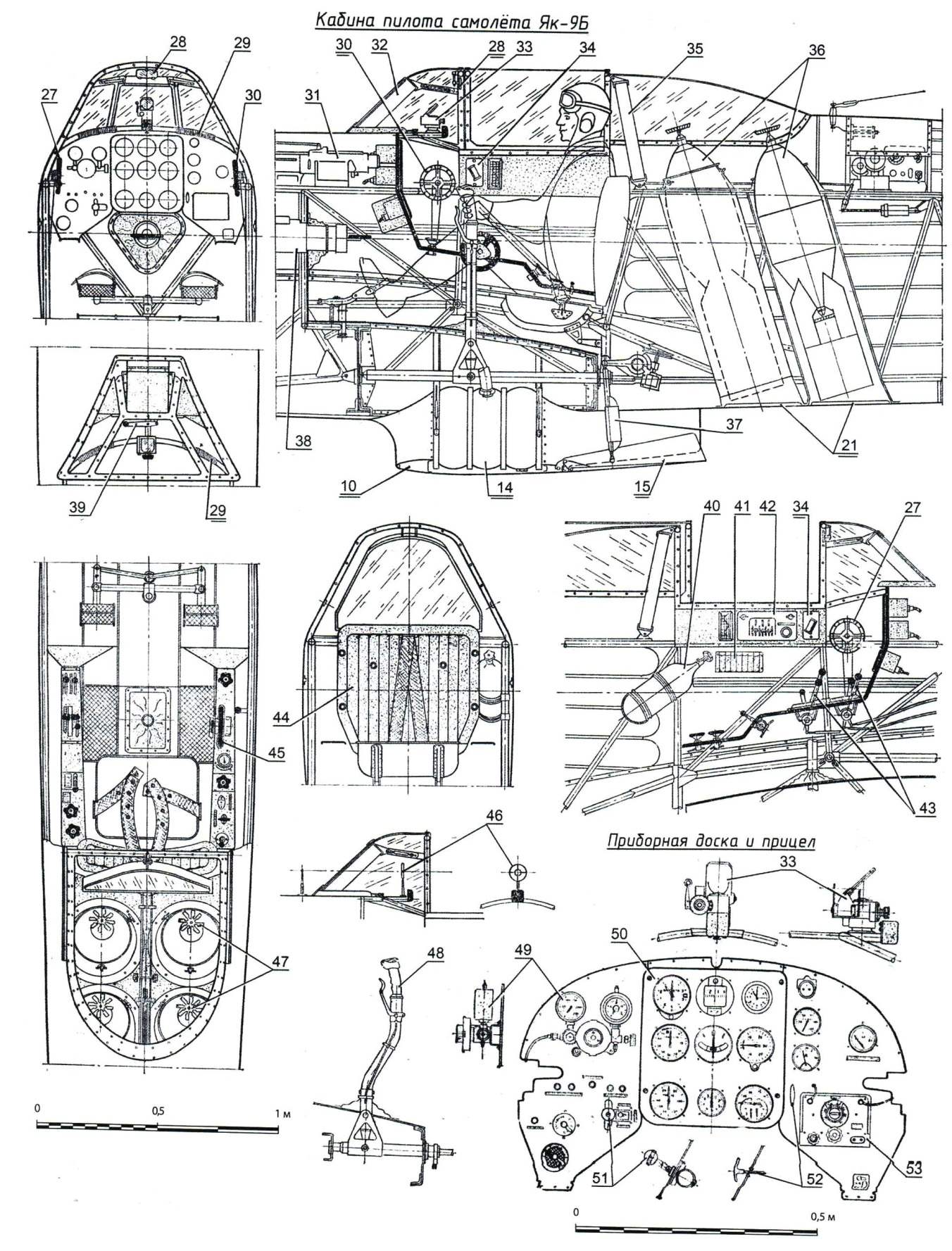 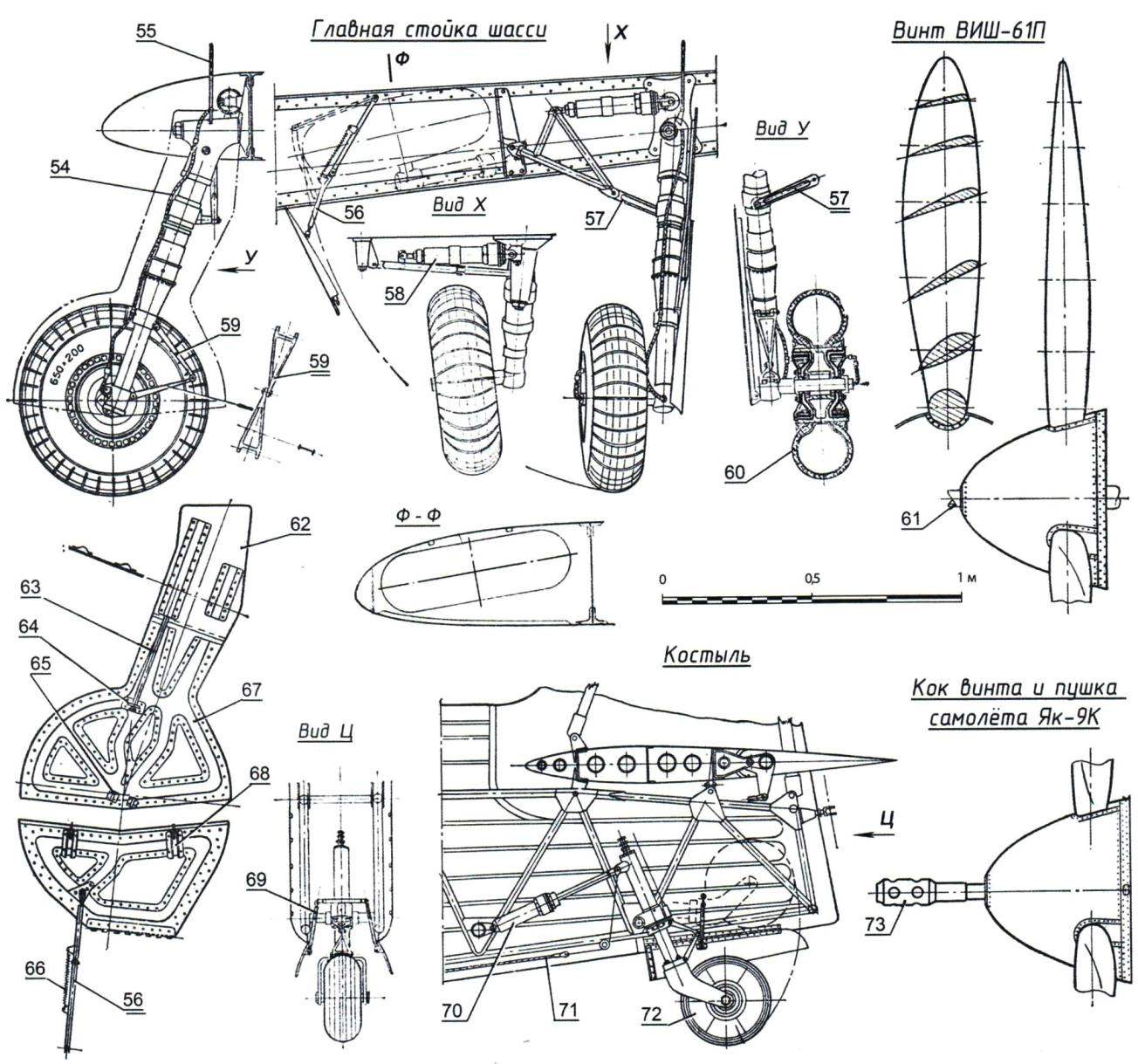 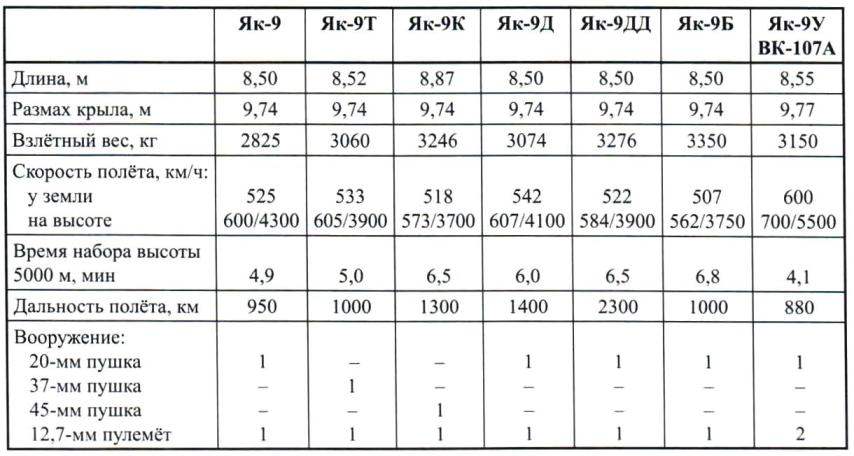 Brief technical characteristics of the main modifications of the Yak-9
Fuel was placed in tested gasoline tanks, installed in the root of the wing between the spars. To prevent fire or explosion tanks used cooled exhaust gases from the engine, which filled the liberated from the fuel space (in different variants of the aircraft the number and capacity of fuel tanks was different).
Radiator oil cooling was located initially in the forward fuselage under the engine on later models is at the root of the wing. At the bottom under the fuselage behind the rear edge of the wing was vodoradiatora to cool the motor.
Chassis – retractable, tailwheel. The main stand was along the wingspan to the fuselage, the skid was removed back on the flight.
Housekeeping system-landing gear, landing flaps and wheel brakes worked from compressed air. There was a alarm system.
The equipment of the Yak-9 was the minimum required for front-line fighter. The instrument panel was mounted on shock absorbers. The rest of the cabin equipment on the side and side panels. On the starboard side, above the console, was the oxygen device. For communication in the air served as a VHF transmitter / receiver radio station of the RSI-4.
Weapons and book of the planes in the release process was significantly changed. In different variants of the Yak-9 was mounted aircraft cannon caliber 20, 23, 37, 45 and 57 mm UB machine guns of 12.7 mm. As noted above, was a unique variant of the Yak-9B fighter-bomber with an internal suspension of bombs.
Back seat, front and rear armored glass protected the pilot from bullets and shrapnel.
A typical painting of the Yak-9-olive-green, with dark green or brown stains, camouflage on top and light blue bottom. For aircraft of various aviatiei was applied to different kind of digital symbols, insignia and badges of the guards; practiced painting spinner is red. Stars – red with red-white piping.
YAKOVLEV