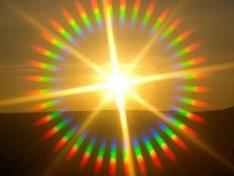 Researchers from the University of Manchester, together with colleagues from the universities of East Anglia, York and Nottingham, UK, are using nanotechnology to convert solar energy into a clean fuel.
The solar energy potential is vast — just one hour of sunlight provides as much energy as man uses in a year. But nobody has yet to figure out how to use that enormous energy to produce the fuel.
Professor Wendy of Flavell (the University of Manchester and her colleagues are working to create a solar nano-device on “quantum dots” — small bundles of semiconductors that absorb sunlight. The principle of operation of the device is as follows: when sunlight is absorbed, the temperature rises on semiconductors and their conductivity increases. Then acting on the molecules of the catalyst located on the surface of “points”, they create new fuel.

“To be more efficient with the resources of the Sun, we need to learn to obtain such “fuel from sunlight”, which could be stored, transported and used as needed, not to depend on the time of day, i.e. the presence of the Sun in the sky, — said the Professor Flavell. — Most hydrogen is now produced from organic materials, which, as you know, ever end. It is therefore very important to learn to receive energy from renewable sources”.
As noted by Professor Chris Pickett of the University of East Anglia, the process of obtaining synthetic fuels from different resources using devices based on quantum dots that collect energy from the sunlight, can be called artificial photosynthesis. “The joint work of chemists, physicists and other researchers of properties of substances on artificial photosynthesis may soon lead humanity to the stage of development when it can create effective clean, environmentally friendly fuel,” said Professor Pickett.