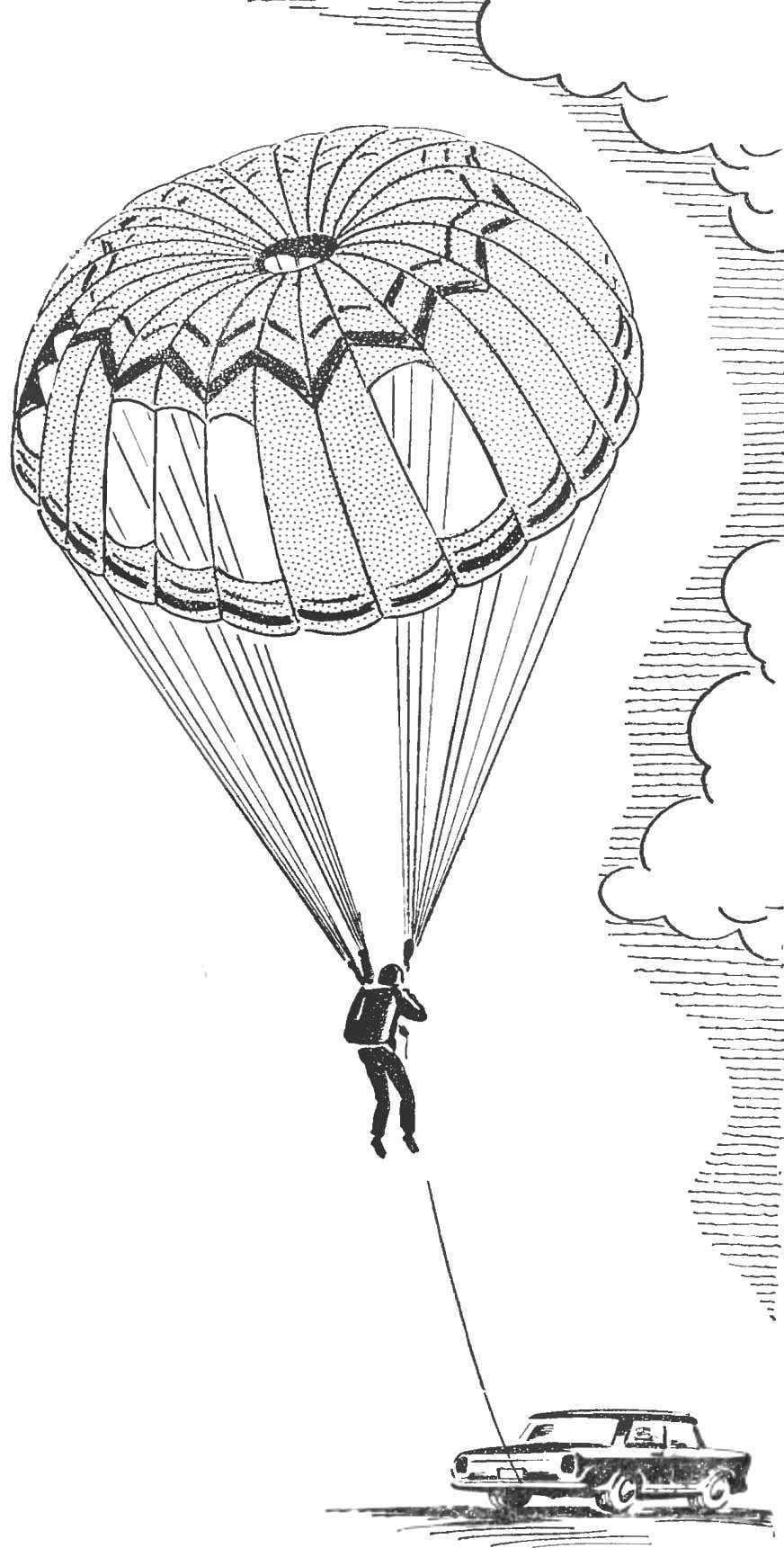 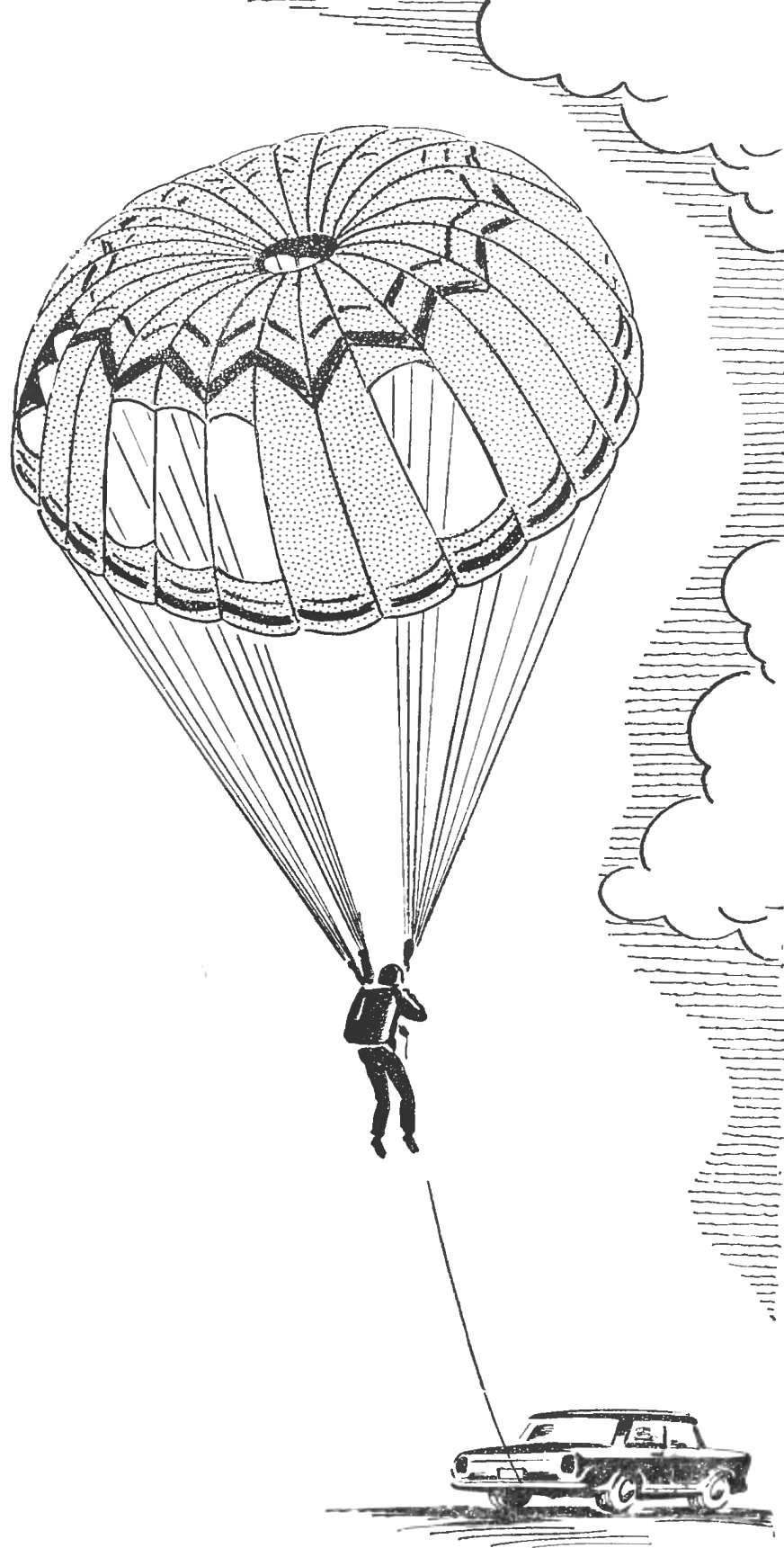 A strange impression was produced by this letter. A strange mixture of almost fanatical faith in their cause and the categorical rejection of any other Hobbies with doubts about the correctness of the chosen path… “was the day I said to myself: “Everything. Fly! By any means” — so begins a request to the editor resident of the city of Yuzhnouralsk V. Vetrov.

“I was a parachute club in Yuzhnouralsk energy College and one day asked the boys to try their hand at towing a parachute…”
This proposal followed two years of deliberation, calculations, simulations, a rigorous examination of various parachutes systems. “We had to shortchange all I know of parachutes to understand in what way was engineering when they are improving.”
The group Vetrova were serial, that is completely unsuitable for towing a flying parachute or two of PD-47 and one CTPS-2. In order to “teach them to fly,” was a necessary alteration. But to accommodate the dome and suspension system for a towing flight is no easy task. For one person to wrap slings under the new scheme required a week of labor because the number of nodes that you want to tie on the straps, the thousands. “With the guys we’ve done this for two or three hours.”
Measured in thousands and the number of experiments to test methods of towing flights, to ensure safety in emergency situations. “How many schemes experienced in the air! Change the length and location of the sling, the shape of the dome, chose the angle of attack, worked out a scheme for toe-hooks, experimented with various devices on the dome of the pockets, inserts, etc. It is possible to develop recommendations and test maneuvers, allowing largely safe conduct of flights”.
Tow flights by its availability, simplicity, and relative safety.
On the preparation of a material | part, the ways of remaking a parachute, it hardly makes sense to speak in detail, because according to the author: “modification of the dome is strictly individual for each type and each series of the parachute, and without knowledge of all the forces acting in flight, and during the run-up to the material of the dome, and without calculating the strength for the remake is better not to take…”
If we consider tow flights, matching them with the parachute jumps, the comparison is clearly in favor of the first. The car can drop a parachutist to a height of 300-800 m, and after uncoupling the towing halyard future is no different from a conventional parachute descent.

Scheme of towing flight
The advantages of towing flights in comparison with jumps: the reliability of the dome, which eliminates the question “will reveal or not reveal?”; the lack of dynamic load/ZOK, since the dome is revealed not in the jump, and still on the ground.
Another advantage towing flight training can be done without uncoupling the towing of the tether after tightening of the athlete to altitude. The descent in that case is much smoother due to the formation of additional lift from the oncoming wind flow and, importantly, without horizontal movement.
“A man who knows how to fly a parachute prepared to commit sports jumps, he can control the dome to work on precision landing”.
Yuzhnouralsk is not the only city where towing parasailing. “We correspond, exchange ideas, experiences, drawings, but I would like to have more opportunities of contacts. It hurt to know that someone repeating your mistakes. We will be glad, if supporters write us at the address: 457040, Yuzhnouralsk, street of Lenin Komsomol, d. 9 Vetrov V. A.”.
And another letter from the city of Gorky. Combines it with the first not so much a common passion — flying a parachute, as the extent of this entrainment, the “degree of obsession”. Also distinguishes a second letter from the first, perhaps, a more rational approach to a new sport, a good combination of emotional and practical aspirations. However, it is better for the readers to judge…
Beginning a new sport — flying at the gliding parachutes is put in the city of Gorky famous designer of cruise ships, laureate of Lenin and State prizes, doctor of technical Sciences and the master of sports Rostislav Evgenievich Alexeev.
After Rostislav E. rose into the air under the dome and his colleagues B. Question B. Zobnin and other young engineers.
The first flights took place seven years ago. During this time, worked out the technique of flying and the methods of their performance, made up the programme of teaching beginners. Was developed and rules of safety — and perhaps most importantly for the successful development of this sport.
The flights were carried out on meadows and field roads over the river and by the sea, and in winter over the frozen lakes, Fly by night and by day, in tow behind the car and without it — with a single wind.
We believe that flying gliding parachutes could become a new sport, and to see for themselves and prove others, were invited to look at the flying of the designers and the testers and our sport parachutes That’s their opinion
B. Chizhik, test parachutes, honored master of sports: “to Fly, how to fly, you are completely safe…”
C. Rudawska, designer, party design one of the best parachutes UT-15: “We are convinced that our parachutes during towing are doing great…”
Why we chose the device for lifting to the sky is the parachute, and not, say, a hang glider? There are several reasons.
First, this aircraft, along with a hundred-meter cable and lock uncoupling weighs about ten pounds and fits in a backpack of medium size, so the equipment to the place of flights it is possible to carry on public transport.
Secondly, a parachute is no more dangerous than tow hang gliding — because the soft dome becomes dangerous when the loss of horizontal velocity. Well, after unhooking the tow rope or stopping the machine the tow is normal parachute descent, who daily make hundreds of athletes.

The horizontal speed of modern gliding parachute reaches 9 m/sec. the Glider has a greater speed of about 16 m/S. Obviously, during the descent from the same height the glider will fly much further. However, it should be noted that the aerodynamic efficiency of gliding parachutes is increasing all the time, and the domes they don’t remind me of the usual hemisphere, and more like a air mattress triangular shape. Hope they counter flow of air in the initial phase of takeoff.
We should not think that flying on a parachute towed easily. Before heading into the flight, the athlete should carefully examine the principles of interaction of the parachute with the air flow. Management is a skill that dome need to automate on the ground. Mastering the tow flight, we always remember that it is new. And to pave the way into the unknown is always difficult, the sky does not forgive mistakes. Courage must be combined with care, imagination — with the most careful calculation. The objectives of the new sport can be solved only by continuous search, experiment, analysis of errors and achievements.
A variant of the trajectory at the parachute shown in the figure. The start is only against steady, without gusts, wind speed of six meters per second. The race distance depends on wind speed it is the smaller, the stronger the wind. In calm weather the mileage is usually not more than fifteen meters, and with the wind 5–6 m/s athlete manages to run on the ground only a few steps.
Height of flight depends on the speed of the parachutist relative to the air, the length of the tow rope (300-meter rope, for example, allows you to dial a height of about 200 metres), the aerodynamic qualities of a parachute, that is the relationship of its horizontal velocity to the vertical in free descent, and, of course, from the art of the athlete — his ability to hold the dome in the correct position
Parachute with the uncoupling from the towing halyard is a useful exercise for testing the accuracy of landing. What are the advantages compared to jumping out of a plane? Yes that running jumping this way takes much less time than usual, because it is not spent nor set a height sufficient for safe parachute deployment, nor for its installation. Yes, and the economic side of things is important — “Volga” or “Zhiguli” — not a plane, they don’t need no airfield, no runway, nor the hundreds of liters of fuel
In addition, the towing flights contribute to the spread of military-technical knowledge and sports among young people. A particularly strong thrust to the sky in adolescents. Flights make available to them the big world of aviation, promote the growth of courageous replenishment, airborne and other military units, especially where valuable qualities such as strength, resourcefulness, courage, interest and love for technology.
V. MOISEEV, head of section planning parachutists Gorky