He was 90 years old. For many, this is not only creative, but also a physical limit. But Alexander was embarrassed when it came to the car to take to the editorial Board for a meeting dedicated to his birthday: “Why worry? I would perfectly got on the subway!” Others in his years of talking about health and medications, and Alexander eve was called to talk about his new model of the original engine. Their A. S. Abramov and known to our readers.
Motors are his passion. The same “one, but ardent”, carried through life. Where it is not easy to define, because ROS Sasha Abramov in the family of a carpenter. One thing’s for sure: it since childhood. Fourteen-year-old boy, he is already trying to build his first engine. But in those days — and this is the beginning of the century! motors still generally a novelty. Not accidentally conceived then the first-born was… steam.
The test stand it was based on an ordinary kitchen stool. And the basis for the design — found in a junk shop a lenticular brass tank. Soldered to it is necessary pipe, tap, other details; mounted on a stool a kerosene stove, perched on top of their facility, arassociati” burner, and I went with friends to wait for produces steam and increasing the pressure. The minutes passed and no effect. And then the young inventor was horrified to notice that oblong tank somehow turned into a ball. Realized that brewing is a blast! To clear Primus and to open relief faucet! However, steam comes out. Clever boy realizes that careless soldering of the overlapped holes. A bucket of cold water manages the same time to relieve the pressure inside the tank. However, after otpevanie of the faucet came out so much steam that the kitchen resembled a bath. Since then, the friends began to refer to it as “Sasha-engine”.
— You will not believe, — said Alexander, — but my second design was the internal combustion engine. And from what? Found on the four-inch dump pipe flange and the like of metal, as told to the current students. The tube was a cylinder, and from it was made the “piston”: a segment sawed lengthwise, sause m two months together with a friend in the lap with sand and emery, achieving a suitable “mirror”. No rings on this piston, of course, was not — some seals have made, burying the oil there. Somehow, but worked! On the stool, shaking walked by this infernal device. The end came when a novice test pilot tried to increase engine power by replacing the gasoline… gunpowder. Slipped a bit under a candle — cylinder, kissing, even a little added — visibly trembled, grew bolder, doubled the portion gasped so that everything shattered, and bend the shaft broke the stool. 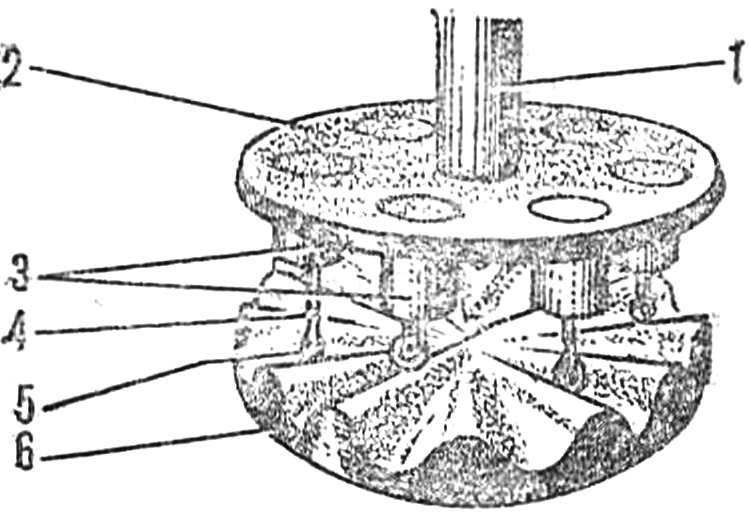 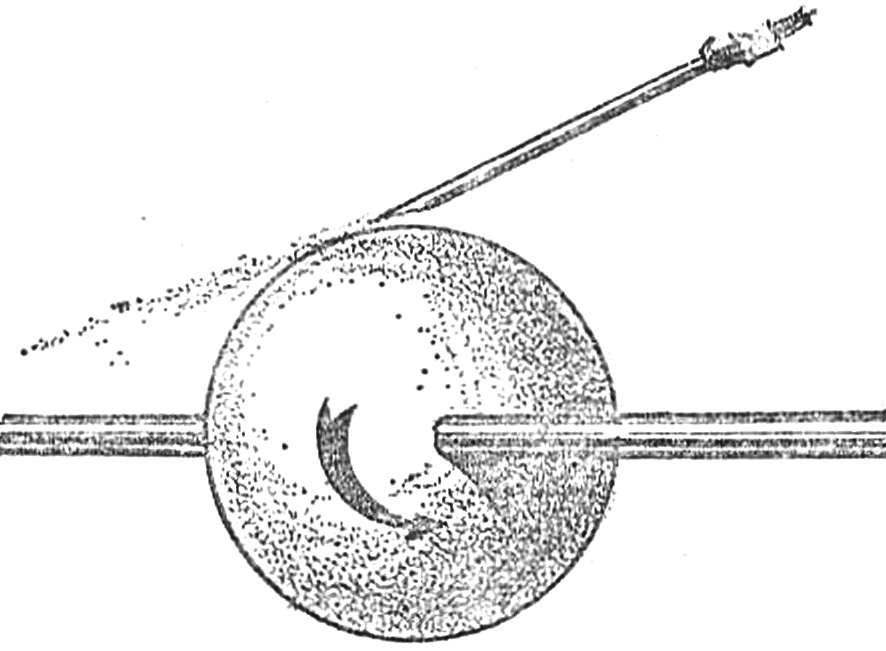 R and S. 2. Experimental model of saracuruna.
There were no injuries, but not without some peculiar consequences: the young inventor soon finds a job in a repair shop first automotive ROME — Russian society of motor carriages. Here he is passing his “universities”: receives and basic knowledge of equipment and practical skills of handling her.
— Do you know what it led to? — remembering those years, Alexander smiles. .I built my own car with its own motor. It was something double on the bike wheels. If branded car shied not accustomed to horses, from mine, it seemed, shunned the cars themselves. However, once I toured the engine crews of applause: it turned out it was moving some foreign delegation — she was delighted by the sight of my miracle stroller. I could stop at any pharmacy for a refill (gasoline was purchased there), as it was going so curious that it threatened to disrupt traffic.
However, the car was necessary to him Only insofar as given the opportunity to experience the self-made engine. Because only the latter remains the constant object of creative interest of Alexander on life… Even half a century later, when retired, no dominoes in the courtyard or a quiet bench in the Park couldn’t entice, and even more so to replace his old Hobbies. Only now he did it not alone.
Alexander, who lived at that time near Gorky street, in the lane Sadovsky, collects domestic children and organizes an aircraft modeling club. Together with the young technicians, he soon designs micro-motors, two of which occupy the third place in the competition of the Central aeromodelling laboratory.
From the courtyard it wherever he lived Alexander — going to the housing office, negotiates the room, organizing the club. And so for 25 years! How many guys have passed him the first lessons of working with tools and materials, and how many of them are such which have managed to sow the sparks of their own ever-burning flame of constant creative search.
— Alexander Sergeyevich, and all of it was a model of a mug?
— No, in General, we can say, microwaveconvectionoven. Of course, it’s fun to build a model and play with it or compete. But much more tempting for the kids to assemble the structure on which you can ride, to driving it. Experience shows that such a thing is capable of uniting children of different ages because it is fun for everyone and gives everyone the opportunity to contribute to the creation of a car. We have with great enthusiasm worked even girls.
And since each such homemade needed in the motor, their creation was accompanied by a corresponding search engine, and often the mover. The most interesting development was established, headed by Alexander Sergeyevich circles at the Institute named after V. Kurchatov and Institute of chemical engineering. It was here that he received the birth and have been tested in the courts children’s aircar, the original motor “bench” where you could ride at the same time a whole gaggle of guys, and many others. Designed here the machine is repeatedly opened start-the parade of the all-Union rally of home-made cars. At one of the parades the real sensation caused built in the circle of L. S. Abramov little micro-car, which the engine has been cleverly used… outboard motor — of course, modernized to the “land” application.
Not all ideas unusual engines were embodied in metal — part of them remained in the form of working models, where the fuel mixture combustion was successfully simulated by swap in the working air chamber through a tube, by mouth or with a compressor for aquarium or refrigerator. This scheme works most of the original models of Alexander, clearly reproducing of the inherent principle. L the principle, in most cases, just unusual.
For example, a multi-cylinder engine. Its shaft is rotated themselves cylinders located on a horizontal disk around it, as around the vertical axis. Under this rotating disc below the cylinders is the second with wavy, like washing the Board surface. In its hollows abut the piston rod, replacing the usual connecting rods. Every stock has at the end of the roller running over the waves of the fixed disc during operation of the motor: at the time of the burning of the mixture, the roller runs down the slope of the wave down, turning the top drive with the cylinders; when lifting the same on the opposite slope is the ventilation of the working chamber of the cylinder and compressing a new portion of the mixture. Interestingly, almost simultaneously with the creation of this model appeared in the press message about the development in West Germany of the engine on the same principle.
The model described above he passed the Central station of young technicians is ready to offer other, equally interesting: if the future inventors will continue his quest.
Have of Alexander a series of models of engines and compressors without costing the crankshaft. One of the published schemes has interested the designers of the Leningrad plant “Compressor”, I came for a consultation, intending to implement an enterprise idea Abramov.
Everything that rotates or can be rotated — the object of close attention and study of the inventor of the veteran. He is experimenting with impellers, pneumatic system an interesting model with their application. Here on the table one of the study models belopotosky impeller: the familiar plastic ball table tennis, fixed on the shaft. The inventor closer to him, needle-like tube with a beating from her jet — air ball instantly unwinds, increasing speed.
— Is it only the friction of air on the surface of the bead work here? — it is felt, is not the first time asks Alexander. — And maybe there still is connected electrification, the same charge? 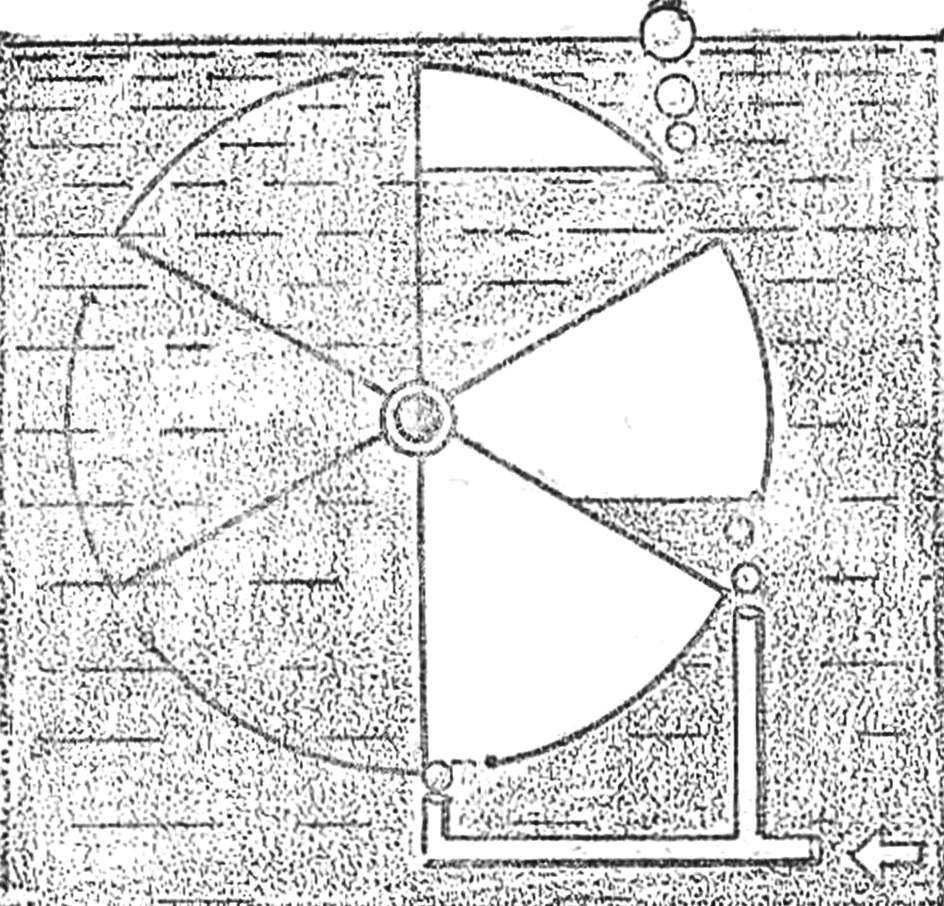 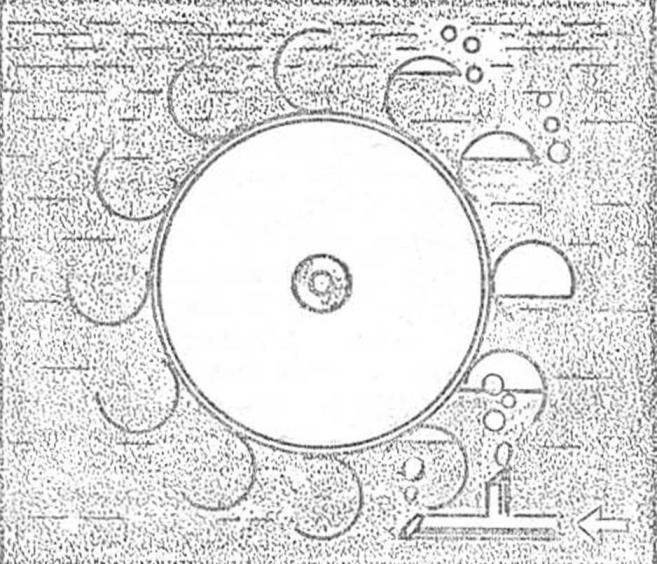 R and S. 4. The option of the pontoon wheels of the engine.
Pneumatics, air jet is a favorite “tool” of the inventor. It is the air forced it to work in a fascinating recent developments is hydropneumatically operating on the principle called Alexander Sergeyevich pontoon. Imagine a wheel with flat spokes sandwiched between the two rims: the rim it has the slit-window in each of the sealed chamber formed by the two spokes. If this wheel is lowered into the water in the bottom of the window to serve the air — bubbles, filling the chamber will begin to turn the wheel. It turns out the original hydropneumatically. Designs vary slightly, but the principle remains the same: the air displaces the water, filling a volume, which rotates, and then the rotation of the carrier. Alexander shows a variant of the model: the vertical disk as on the mill wheel attached upturned cups. By blowing in the tube, even of small amounts of air, the disc turns and begins to spin rapidly. At the request of the author of my fingers touch the shaft: felt appreciable torque.
The inventor shows several models of other schemes hydropneumatically: they changed the rotor design, methods of air supply, the configuration of air terminals — it shows how diverse can be this amazing motor.
— And the most interesting, — says Alexander, — that it does not require high pressure air, and hence, is compressor moleno to use less powerful sources of air supply. For example, in Japan patented a device that uses the energy of the waves. If you combine this principle with the pontoon — will get a standalone engine, working completely independently, without the traditional sources of energy — free power of the surf and waves.
The offer interested in the Institute of Oceanology and Moscow physico-technical Institute. The student members of KB on the basis of Abramova it was suggested that the decision of the impeller that converts the energy of sea waves into energy of rotation. The air compressed incident wave through the nozzle or dispenser is directed to the portion of the insulated chambers of the wheel and displaces the water. On the camera when this starts to operate the buoyancy force that creates torque and the rotating wheel.
For emptying of the chambers is not required any significant air pressure, and so a similar setup is able to work even with relatively small seas.
— Of course, our work can be of interest as patentable. However, for me it is not important, or rather, not this, and fastest benefit from the use of the above-mentioned method where it is needed today. Too much time is spent on it.
To reduce, to compress the implementation period, not to lose time in vain — the dream and concern of the inventor, if it comes to the possible use of it developments. Maybe that’s why, in addition to engines, the peg has another passion: watches.
Almost each of the walls of his apartment — an unusual ticking the device without repeating the design the next. Here and separate from the main body of the dial, and original clocks, in which ‘the movement is swinging the pendulum, and it really is a “chronometer”: the role of the pendulum or anchor it performs running on a curved wire guides white plastic ball.
Watch the inventor, the engine of the whole life, which is creativity.
B. RAWSKI