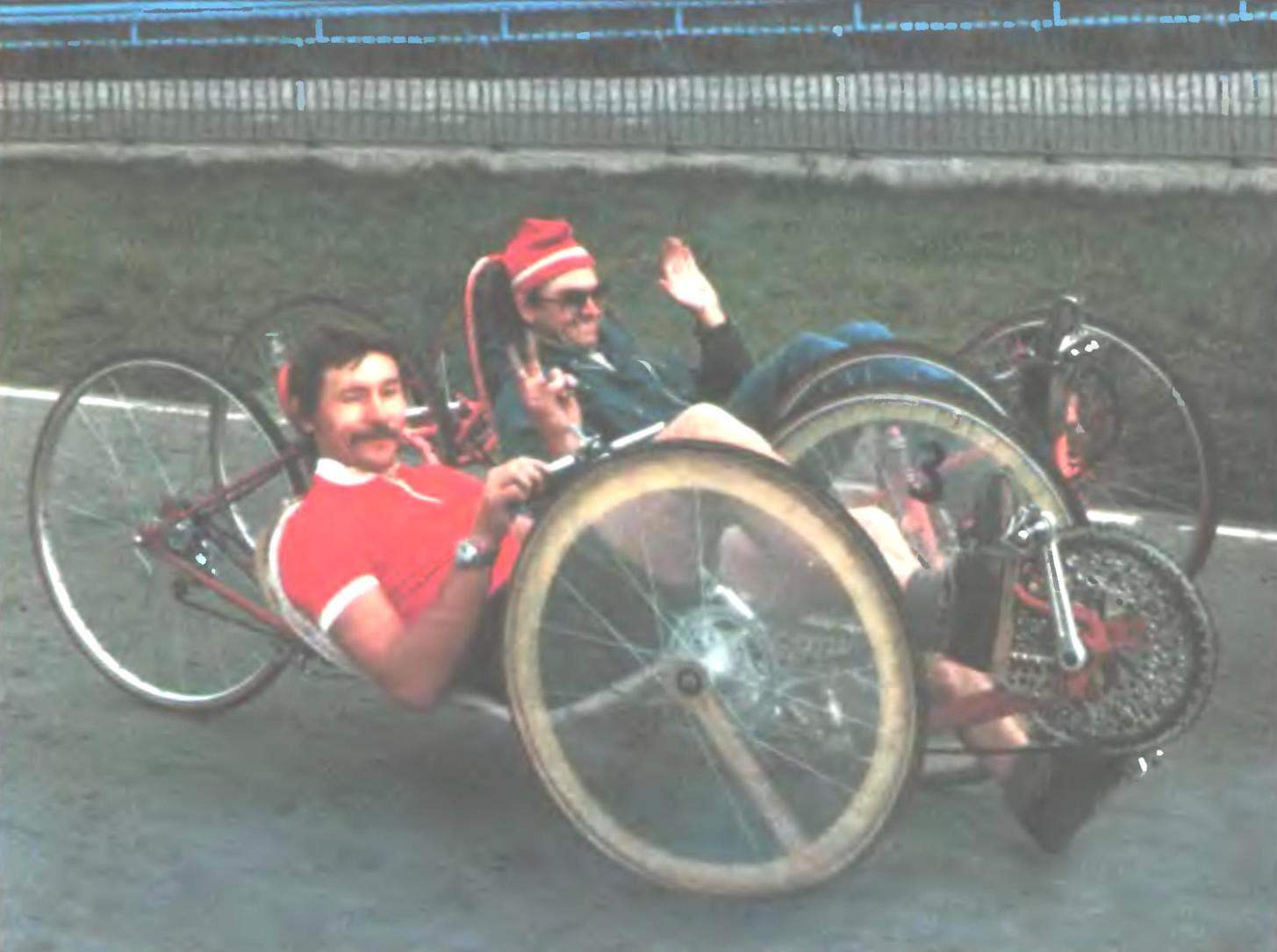 In the last quarter of the last century the world was swept by a wave of invention of new muscular vehicle on the basis of a Bicycle received in our country the name “velomobile”. New modern technology and materials gave the chance to the enthusiasts of environmentally-friendly personal transport is easy, comfortable and fast enough.

Late in the fall of 1976 along the paths of the Lower Mnevniki in Moscow rustled wheel recumbent “Kolibri-35”, and at the Ostankino television Studio of the legendary transfer of Vladimir Solovyov can be entered miniature vilamarina Vita Kharkiv Yuri Stepchenko. In those same years in “the distant” is now Lithuania, a group of students under the guidance of the VISI Professor Vytautas Dovydenas developed and sports options new bookimage.
The journal “modelist-Konstruktor” the first responded to the initiative of enthusiasts and provided their pages to publications about incipient unusual form of transport. First came the message about the Ukrainian “Vite”, and then review article on velomobiles transport and detailed description of the design of my “Kolibri-35”. The ensuing numerous responses and phone calls to the editors and the author were the best proof of how interesting and relevant were raised by the magazine theme. In different parts of the country began to appear, their design velomobiles, originated teams of enthusiastic supporters.
Brewing the need to unite the efforts of Amateur designers of velomobiles.
May 14, 1986 was established the Moscow club enthusiasts biotransport (KEB), which became the backbone for the creative creators of the muscular transport throughout the country. 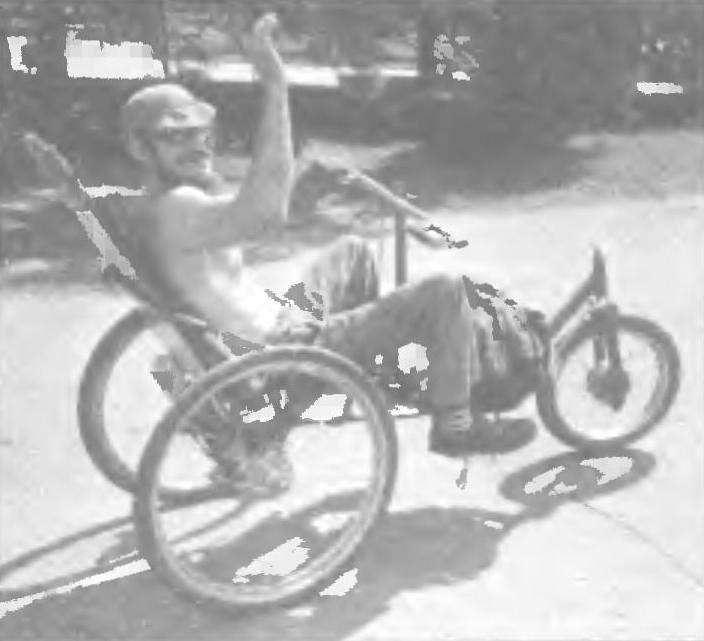 Recumbent A. Zheludov from Reutov participant of the Moscow festival “the Golden ring-89”, is designed for people owning only manual transmission 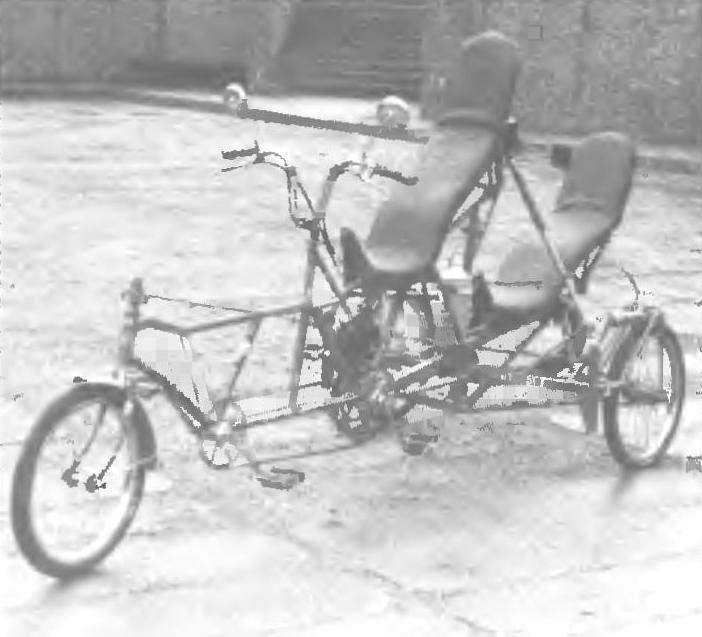 Recumbent tandem “Antelope” Lithuanian enthusiasts biotransport participant of the festival “šiauliai-87”
Moscow KEB held and participated in more than forty festivals, shows, sports events and runs velomobiles, held in Moscow and other cities. The club was organized, perhaps for the first time in a world of mass winter competitions velomobiles. In the “Winter race CAB-87” the paths of Gorky Park. Bitter raced almost 120 participants. Two years later, the winner of the winter competition was leningradets Alexander Galkin on the recumbent “Cruise”, then one of the best riders in the country. At the winter competition for the first time (where else but in Russia!) appeared and snow recumbent on the “quilted” (cars), developed by the Muscovite Gennady Seleznyov.
At the initiative of Moscow the CAB was formed, the section of velomobiles in the State-komsport of the Soviet Union, It was headed by club member Eugene Black. This stimulated the creation of sports and a record of velomobiles. Registration official athletic achievements. In 1990, the competition in Poltava the threshold speed 75 km/h for the first time in the country, overcame Vladimir Smirnov from Belorechensk on the recumbent with an aerodynamic fairing “Leader”. The champion of the country Sergey Dashevsky from Krasnodar many years, constantly improving his design, won in various competitions, became a seven-time world champion in racing velomobiles.
Clubs enthusiasts biotransport were established in many cities: Nikolaev, Izhevsk, Togliatti and others In 1988 hosted the first all-Union review-competition of velomobiles in the city of Novgorod (the Chairman of the KEB — Professor Shchegolev V. A.), and in two years and second — in Poltava. Between shows at the festival in Nikolayev (Chairman of the KEB — Alexander, Magda) in September 1989, gathered perhaps the most unusual design. One of them — body “bumblebee” from Leningrad Eugene Pinigin, was equipped (for the first time!) a pneumatic brake.
Velomobiles will always be grateful to my Lithuanian colleagues for the organization and conduct of šiauliai velofestivalya. Every year in late may, this small and friendly city from all over the country enthusiasts drove their creations to demonstrate the new velomobiles, to discuss designs, share ideas. In 1984 in Siauliai we gathered about twenty veloturistov with interesting developments. Remember the quadruple a cyclobus Muscovite Nikolay Satarov, a tiny and very maneuverable trehalase Michael Friedman from Leningrad, sports cards of Vincas Ruzgys, recumbent teardrop body Yuri Medovikov (then the student MADI, who developed the model under the guidance of Professor A. N. Narbut) and, of course, sports “Vilnius-82” B. Warnod.
In šiauliai, sought and when it was conducted and the Moscow “Golden ring”, Novgorod the competition, and other large events. Enthusiasts took every chance of a new meeting and exchange of experience.
In 1988 he held the most interesting with their innovations and creative atmosphere the participants šiauliai festival Pity that it was the last.
In early June 1989, the USSR team, composed mostly of members of the Moscow Cab, which also consisted of athletes from Poltava, Kharkov, Kazan, went on “small world championship” in the Polish town of Sieradz, where rivals were enthusiasts biotransport from Germany, Czechoslovakia, France and other countries. There for the first time with our velomobiles have potholes in races with well-known eurovisia record recumbent Vector.
Moscow festivals-parades velomobiles “Golden ring”, conducted by Cab, always gathered in the capital, dozens of new designs. The competitions in high-speed races, many kilometers of races, held technical conference.
Ended Moscow forum traditional group-owned velomobiles in the cities of the Golden ring of Russia. Them was the head of the Masons Vladimir — Deputy Chairman of the club. Long and bold mileage made it and with a group kabova in 1993. After the competition in the capital of the Kuban from Krasnodar, they passed through the Crimea, Ukraine, Bulgaria and lossless got to Romania. 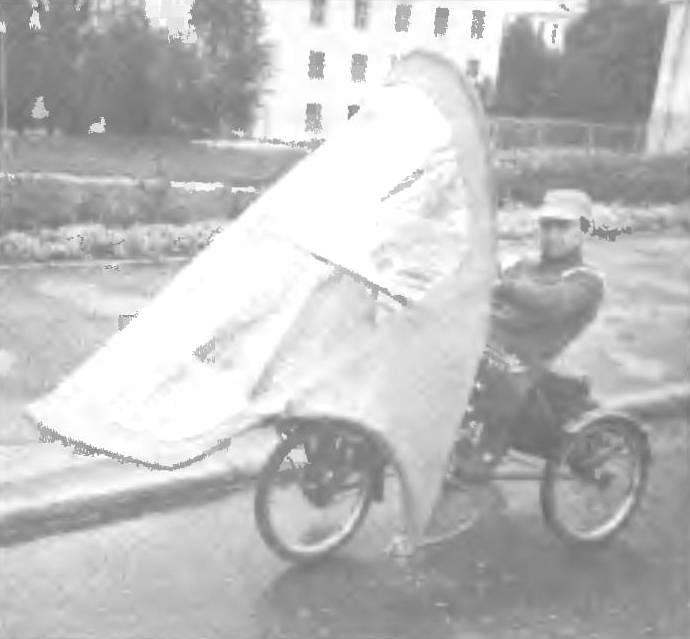 Recumbent “Bionic” V. Kalmikova (organizer runs for the Golden ring of Russia, and many others) have been very reliable and easy to bike tours 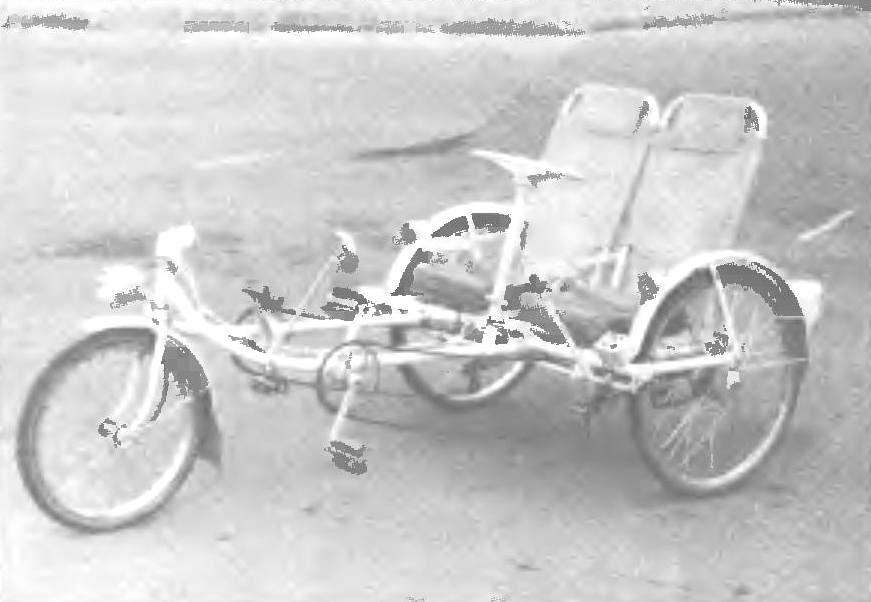 Gladstone G. Sutkus from šiauliai in the top ten were exhibited at the world festival of youth and students in Moscow 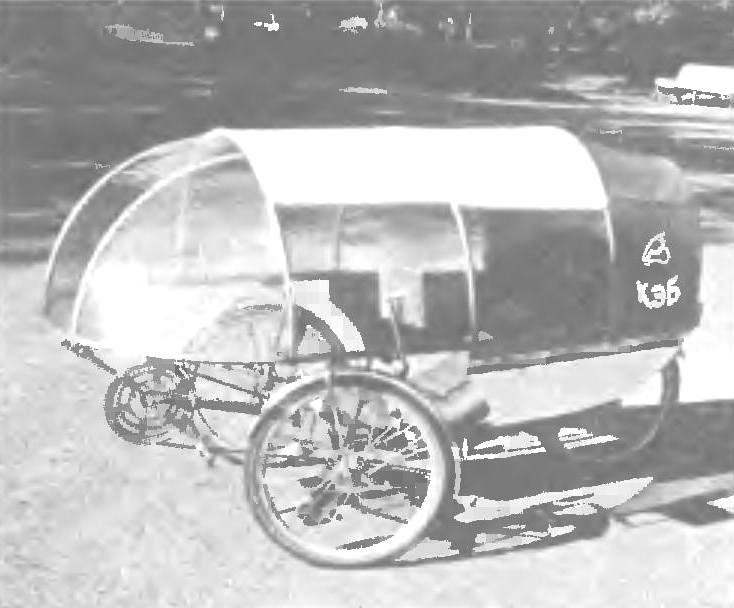 “Sterkh-3” with hinged tilt-fairing Muscovite G. sterkhova — winner of velofestivalya and parades — was thousands of kilometers in Russia and Poland
Many equally interesting events in the world of velomobiles that time would still tell. This Vilnius super marathon, and the mileage on Poland and attempts to make a flying recumbent, and much more. My first feeling is akin to flying low over the ground, now known to every velomobiles, I experienced a fall of thirty years ago — and still remember. Believed to deal with this topic a month or two, but it turned out — for the rest of my life. And don’t regret that I relate to the most job — creating “musculacao”; that he belonged to the tribe of eccentrics working on a recumbent. Some of the supporters are no longer with us but always their contribution to the development of ecological transport. This is the original drive “trombone” Nicholas Satarov, and Alexander santamobile Popolove and unusual “Shogakat” Boris Merkulov — many other outstanding pioneers homemade velomobile.
I’m happy that I was in the midst of those events, when recumbent in the country was in its infancy, has acquired its main features, became a passion and profession of many of thousands of enthusiasts.
Collective experience, accumulated over the years are priceless. Almost every, if not most perfect, the model has its own “flavor”, the soul of its Creator.
Remember interesting development, I help thousands of photographs, drawings, sketches, or sketches of the designs created by the army fascinated by velomobiles. Here is the original recumbent frame from the skis arrived to Moscow from Izhevsk festival; the first folding (not collapsible!) recumbent Boris parachini; the simplest energy storage, fast start, used by Vladimir Smirnov on the recumbent “Start-86”. Or recumbent with heat recovery “the Seagull” Nikolay Terentyev (which was already over seventy, and he initiated the organization of the exhibition of velomobiles at the world festival of youth and students). And the original front suspension developed by Jevgenijs Pinigina? Or unique layout record recumbent “Dolphin” is the result of the creative Union of the Leningrad Andrey Kudryavtsev and Alexander Galkin. Here is the first pedal cars-amphibians Pankeeva Gregory of Nicopolis, and the simplest designs artists from Izhevsk and Perm. How not to recall a series of front-wheel velomobiles Yuri Kartsev, in which you can ride and control even without hands?
Fate brought me together with dedicated and courageous people, such as a member of the Cab Andrei Zheludov, who made more than a dozen velomobiles. At the same time he practically could not move without crutches, but went (!) on their velomobiles from Reutov in Moscow and back. Specifically for people with disabilities, with physical disabilities Muscovite Sergey Lukyanov created his famous recumbent seat, easy controls which allow velomobiles even graceful “waltz”.
Not all designs were perfect or a designer elegant, as, say, Kazantsev, Andrei Isayev. This is understandable — to many it was important to check only the idea, to ensure the correct technical solutions. Enthusiasts biotransport that generation, it seems, tried already all possible schemes of velomobiles. And among them, of course, occupies a special place design, created by Vladimir MA-sourcecom from Poltava. Believe — she is entitled to be called a classic. His “Velotron” with the front leading driven wheel and is today a role model, especially for beginners veloturistov. The same scheme-the standard, but double velomobile, created a “master—Golden hands” from Siauliai Henrikas Sutkus Each and all together we have created a Velomobile, its technical work contributing to the common cause.
Moscow CAB was created and worked in difficult years. He held on and after the Soviet collapse, halting their activities only in 1993. Long demolished in Moscow’s Gorky Park.Bitter the pavilion, which hosted a meeting of enthusiasts, velofestivalya and reviews of eco-vehicles and where was the only permanent exhibition in the country of velomobiles.
The complexity of the last ten to fifteen years has somewhat cooled the ardor of the creative people enthusiastic in this matter. But velomobiles are now well known across the country. Only velomobiles Agency “ETRA”, formed by members of the Moscow Cab in 1988, introduced with this design, more than five million Muscovites and guests of the capital. “Muscularity” caught on as a “trishaw” on the territory of VVC in Moscow; as a attraction in almost every Park on the coast of Black and Azov seas. Some machines are manufactured by small private companies; others, such as pedal cars of the company “BERG” or “Belinda”, comes to us from abroad
The recumbent has not become the mass of the vehicle. Still, this remains a complex challenge. But time is fleeting. And the new enthusiasts undertake for the creation of pedal cars, there are no less original, interesting designs, So maybe we are really lucky, we could, somewhat ahead of time, to lift the veil and look into the future of eco-vehicles?
Happy anniversary you, the creators of the velomobile! His invention continues, as evidenced by publications in the journal “modelist-Konstruktor”. New creative success to all enthusiasts of biotransport!
V. UL,
The General Director of Agency “ETRA”,
Chairman of the Moscow Cab in 1986-1993.