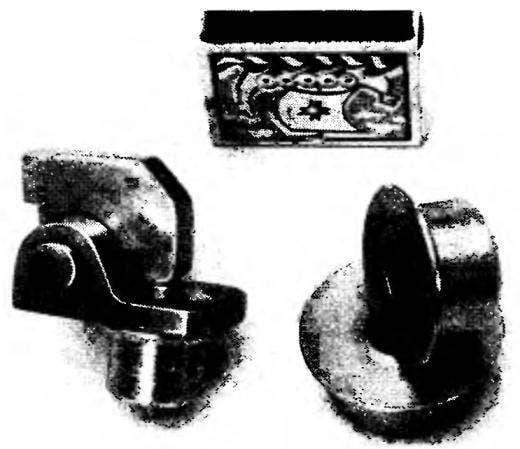 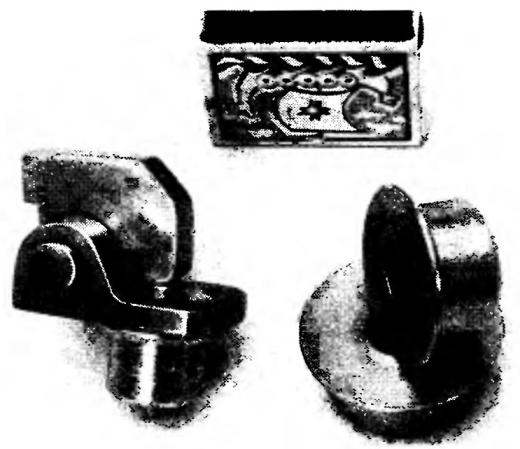 Usually machines, mechanisms and assemblies during installation is fixed to the mounting surface or Foundation of several bolts. The centers of the bolt holes, usually marked with templates, taken from the base mounted units. Work sin a long, time-consuming, requiring the involvement of specialists of high qualification. However, to avoid markup errors that reduce the reliability of fastening is not always possible.

I propose a device which eliminates templates and allows you to mark (kernite) centers directly through the mounting holes of the unit. It is made in the form of a shell with a swivel head, a centering bushing and coaxially with it with a punch. The device is manufactured a set of replacement transition sleeves, put on the spacer used in the installation holes of different diameters. 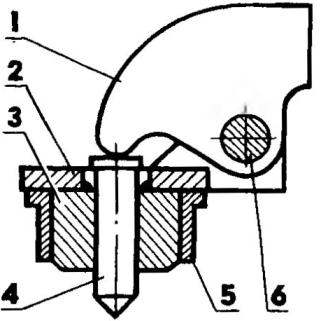 Rabochie the position of the device:
A — in a confined space; B — free space; 1 — surface installation (Foundation); 2 — base mount unit; 3 — part of the unit, overhanging the mounting hole.
After placing mounted units on the installation plane (Foundation) unit are alternately inserted into each of the holes in the bottom of the unit and strike with a hammer. If there is no access from the top (prevent protruding or overhanging parts of the machine), then hit the firing pin jointed horizontally from any convenient side. The impact is transmitted to the punch, and the one moving in the Bush, knocks on space plane of the future centre mounting holes.
If top access is available, the hinge pin on the axis leans to the side and hit right on the head of the punch. Then remove the Assembly and drill a hole in the drill of the required diameter.
C. CUTTINGS
engineer,
Saint-Petersburg