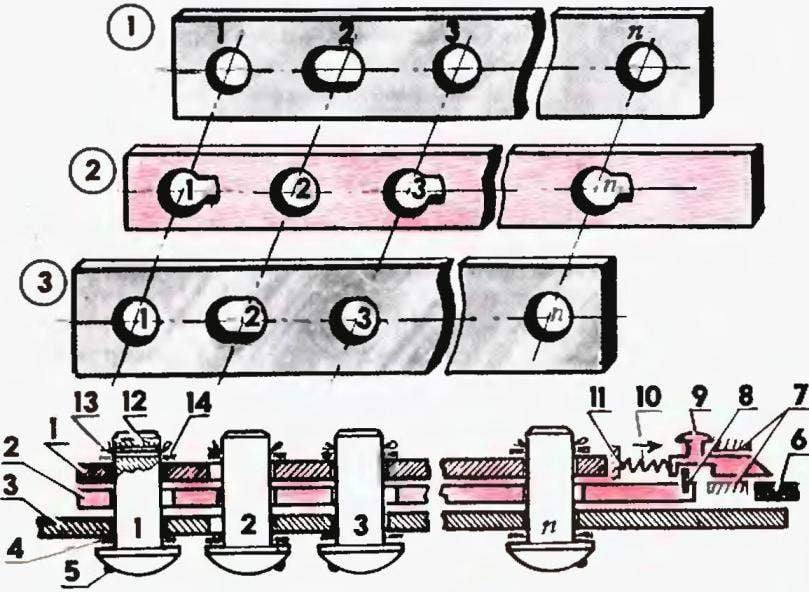 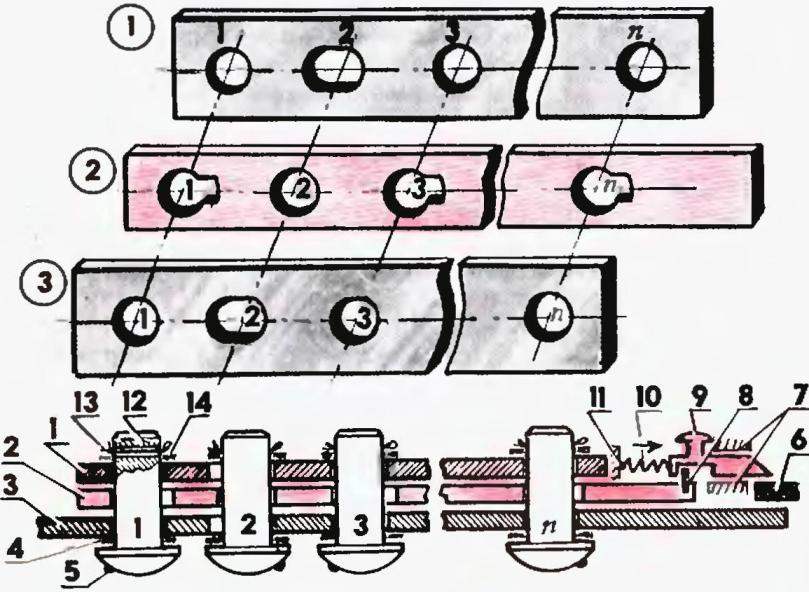 Now many sets of metal doors. But they have a vulnerability — the castle! The neighbor apparently, from hooligan promptings, it twice was severely damaged, Natalka into the bore of the nails, matches. Unable to open, had to drill out the lock. I decided to make a simple mechanical combination lock, which would be difficult to damage. The lock on the outside looks like a smooth door visible only head-knobs, which are easy to rotate, but not pressed, do not move anywhere. Form they are spherical, the surface is smooth with nothing to pick up.

The secret of the castle that once all of the handles in a fixed position of one of them, not outwardly different from others, it is necessary to move in the direction— and only then the lock will open. I shifted the handle 2, and the rest are for setup code.
The principle of operation is illustrated in figure 2. It all depends on the finger position knob in the hole. Possible different position with the openings and side slits At the coincidence code (position 1) there is a possibility of displacement of the movable plate (bolt) to the left relative to the handle. In other positions of the handle (2, 3, 4) strap handles and finger rests in different places and provide a barrier to the movement of the bolt. One of the handles (2) is false, no code, is a “key”. She, like others, is free to rotate outwardly indistinguishable from them. Only when the correct position of all other pens can use it to open lock by sliding it to the side (in this case left).
The sizes of the handles of the lock and the whole structure is not critical — some who under go and how thick the metal is available. The important idea. But keep in mind that at small sizes, the large precision is required. The difficulty for manufacturing of the present handle, as they need to sharpen on a lathe.
Features of manufacture of the castle. 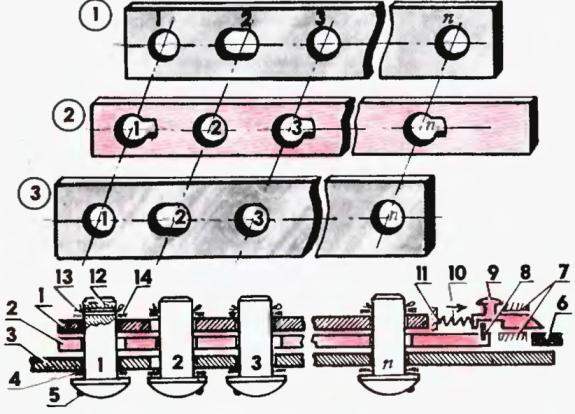 Fig. 3 finalization of the rod handle:
A — advanced; B — final form.

Fig. 2 the principle of the lock:
1 — the code position of the handle in the hole (the lock can be opened); 4 2,3 — random position of the handle (padlock not open).
I took a package of three plates (if you use the door trim as one of the fixed plates, it is enough to take two). Makernew all holes drilled first, one rum diameter of 3 mm and insert it temporarily to the stud plate did not move; then all the rest, just one over the other Later reamed them to a diameter of 12 mm Suitable for handles bolts grind on a lathe to a diameter slightly less than 12 mm, so they are easy HP without the backlash was a hole.
Head bolts-handles performed in the form of a mushroom (the cap) so that they can be freely rotated, but nothing to pick up.
Each handle rod has processed manually in the following way. A file I ground off one side to a size of 10 mm. After that, the rod turned and ate the other side for another 4 mm. was obtained an asymmetrical cross-section.
Manually needle files made of curly cuts holes 1,…N with the right side of the movable bar 2 (Fig. 1) is Similar to propylene in the holes 2 of the strips 1 and 3 to the left side to provide movement of the pen 2 together with the movable bar to the left (then the coincidence code to open the lock).
The lock opens from the inside handle of the bolt-latch 9. Washer on the outside is needed in order to be seen on the worn places what’s the handle moves. It is also important to consider that the cap of the handle should overlap the oblong hole 2 strap 3(Fig. 1)
To know the position of the handles for a set of code, it is necessary to make marks on their hats. I drilled the cap and pressed aluminum rivets: they are felt even in the dark when there’s no light on the landing. These rivets are positioned in different locations relative to cross section handles. Thus, you can easily change the code by moving the handles: when the same position of the code labels are in other places.
This idea can be used in a conventional mortise lock for closing the bore of key: need sleep Chala the code to open the well. It is impossible to spoil a keyhole or to find a key. Will have to Tinker!
This device can be used for locking the garage door several advantages: protected from rain, snow, dust and from attempts in the absence of the owners to pick up the keys or damage the lock.
N. POTTER, Rudny, Kazakhstan