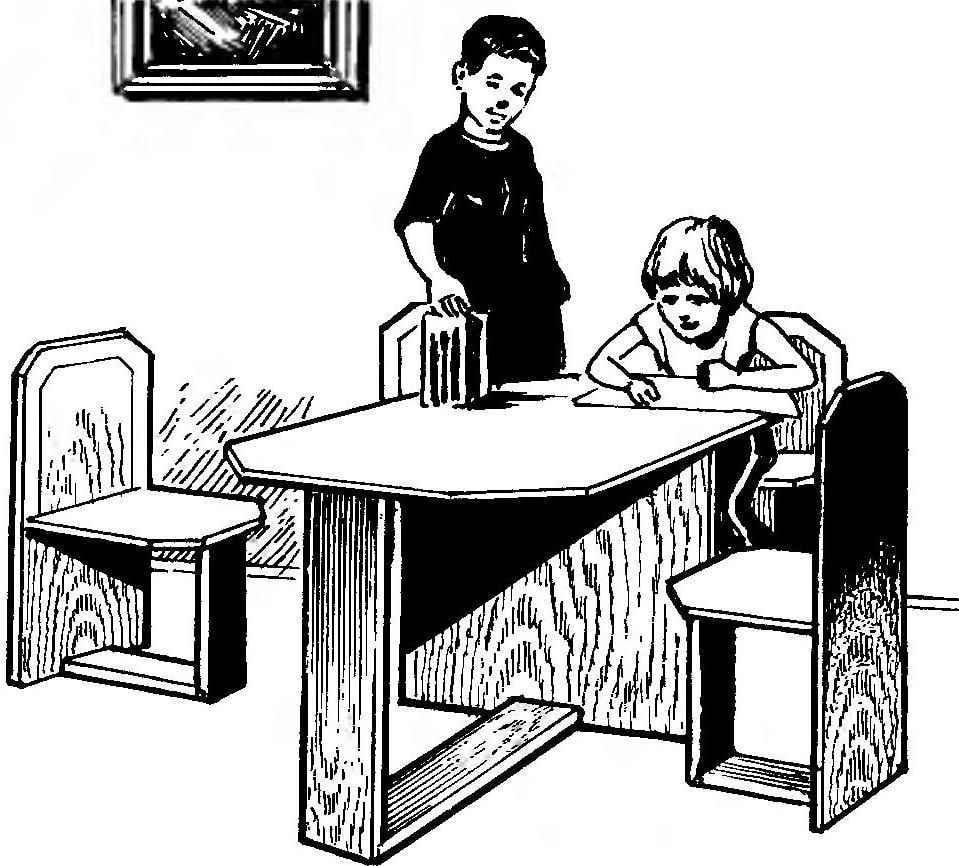 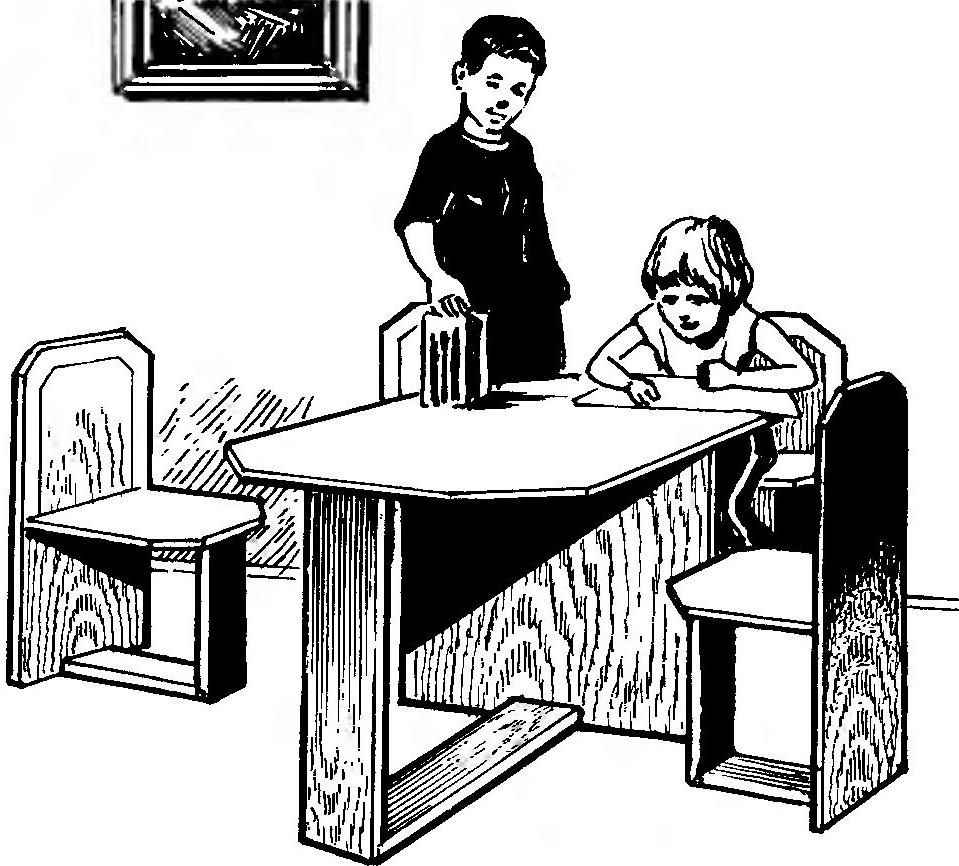 Indeed, this set of furniture consisting of small tables and chairs, no legs in their usual sense: the role of vertical support panel and wooden stand, on which rest the table top and seat. This greatly simplifies Assembly and makes such furniture, recommended by the Hungarian magazine “Earmaster” for a child’s room, it is available for self-production.

The easiest way to assemble this set of ready furniture Board or particle Board. It’s enough to saw only a few details differing only in that one set of them will be designed for the table and one for chair. Constructive the basis of the items will be shared. And it is in that horizontal plane of the objects have almost the same basic part as table and chair.

Its main components are two planes: the top and vertical backing plate, performing the function as if the two legs. The role of third legs plays already mentioned stand. She is dual: going on glue (carpenter’s or PVA) of two narrow panels of equal width, but different lengths. Due to this, the bottom strut is formed a kind of ledge, which counter includes outdoor ledge detail — tie connecting the rack with a support bar. The coupler is also dual; one of the components of its narrow panels are also shortened.

Thanks to the ledges of the front and the coupler are joined together as if vpoldereva, although it is not necessary to choose an appropriate ship, which, of course, simplifies the provisioning of their joining. The connection can be performed even on nails with pre-greasing the abutting part glue.

At opposite ends of the strut and tie have plug-in round thorns for connection, respectively, with top and base panel, again using glue. The latter are connected between themselves at plug-in round thorns. For greater strength in their private lives can be strengthened by two triangular struts installed also using the round plug-in thorns and glue.

From the table it is different, perhaps only in size yeah other decision support panel: it is elongated and forms the back of the chair.

In this regard, the seat, in contrast to countertops, not superimposed on the reference panel, and pristykovyvayas to her using again inserted a round studs with glue and triangular struts.

As for the struts and ties of the chair, the parts and their connections are similar to the corresponding elements of the table. Almost similar to each other and the seat to the top.

For convenience, the upper part of the back of the chair runs the cut under the arm. And to make it easier to move the chair without lifting it (still heavy!), at the bottom of the backrest from the backside can be equipped with two furniture wheels then bent back on themselves, will be able to move the chair like a truck.

As these parts have a Desk and chair are similar, they are technologically the same. To get them each a pair of long and short billets smeared with glue and after applying one to another are kept under pressure. Then on the ends without ledges drilled the appropriate holes and inserted round spikes so that one was on one of the double blanks, and the second on the other. 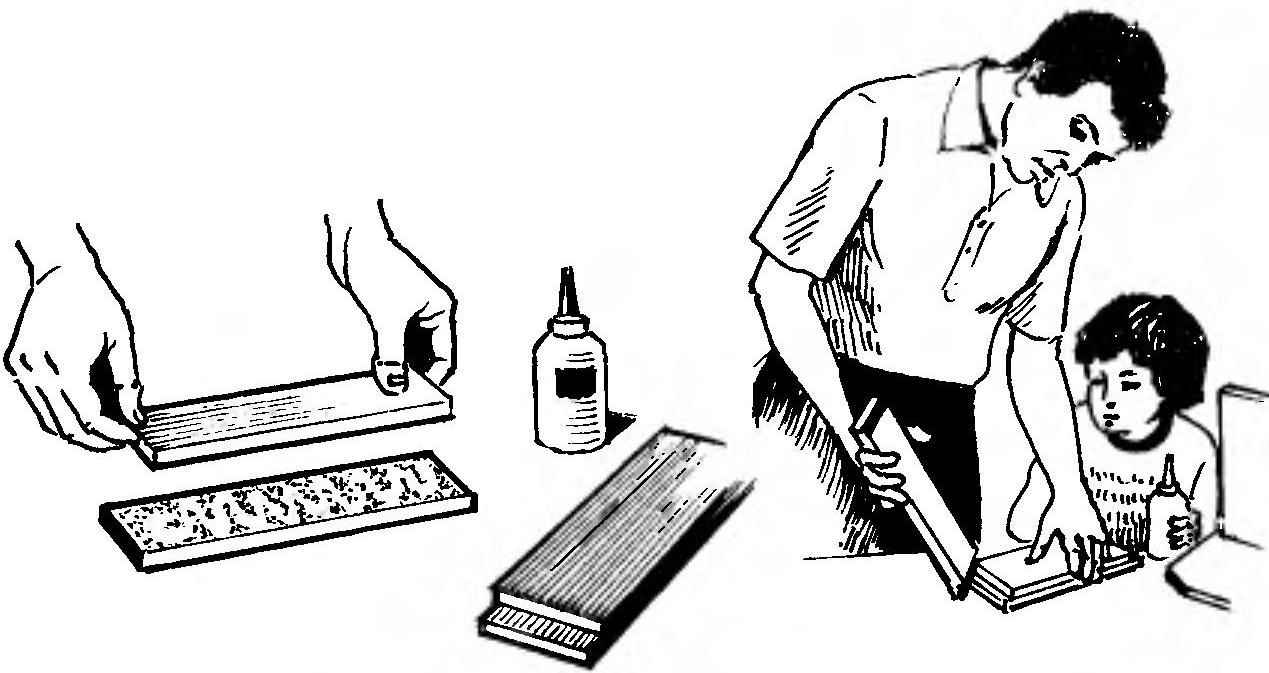 The connection of the strut with a screed with glue 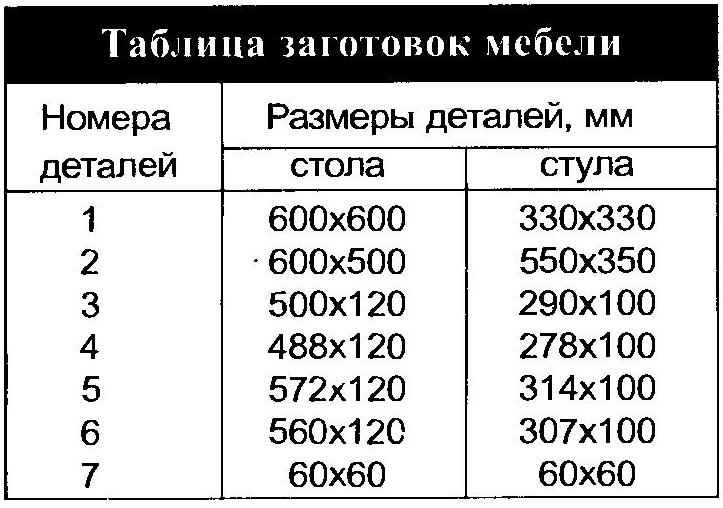 If all the blanks were made of the finished furniture Board, special finish (e.g., gluing veneer, plastic or paper decorative strip) will require only space cut.

Details of CPD require paint oil or enamel paints not only for aesthetic, but also environmental requirements, especially for a child’s room.