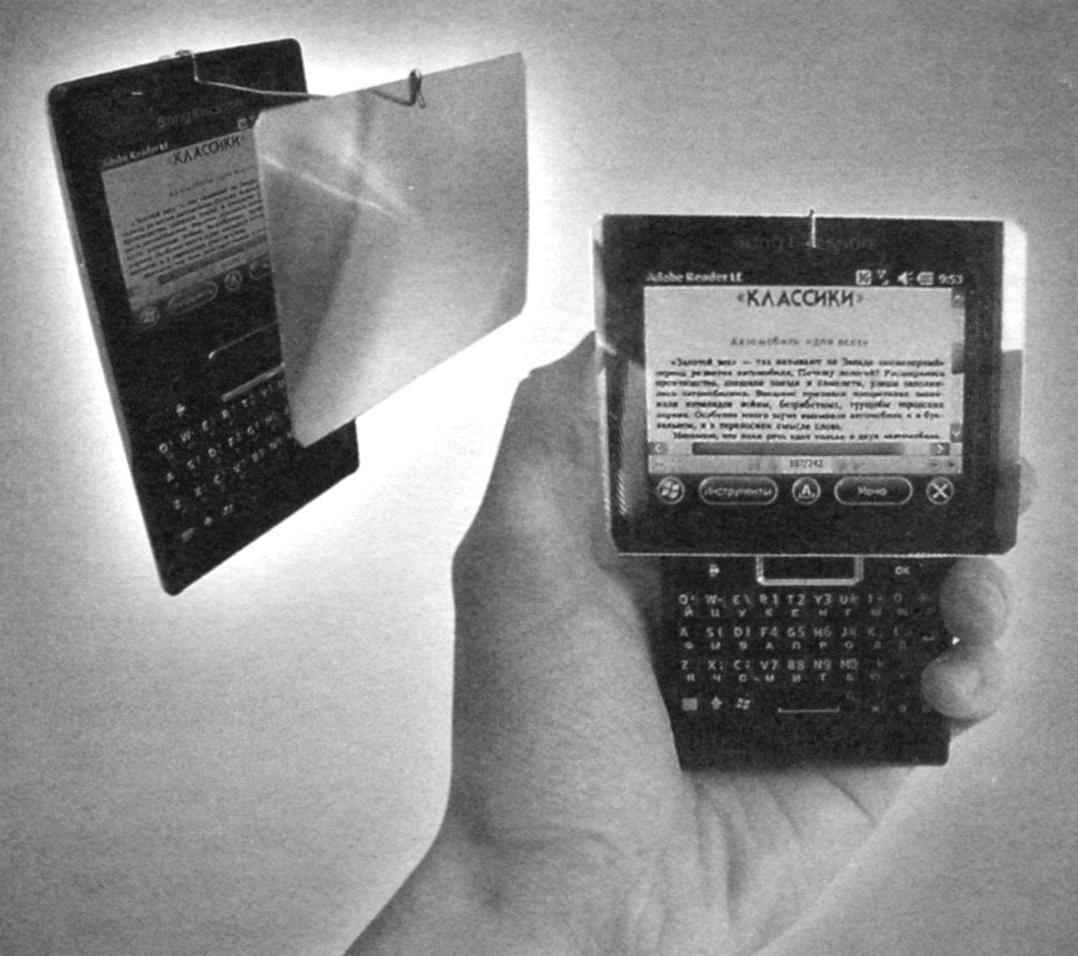 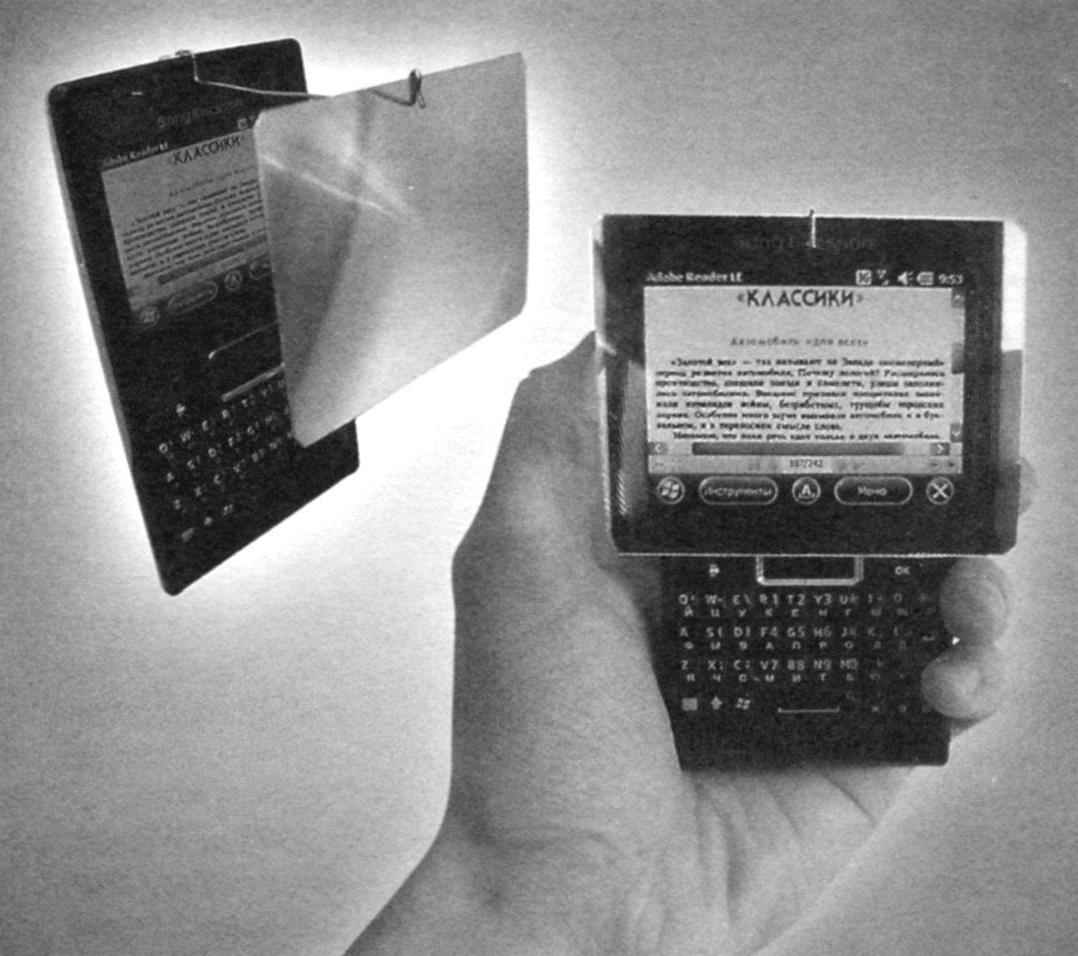 In the early XIX century the French scientist Augustin Jean Fresnel has created an unusual lens, which are not brushed solid piece of glass with a spherical surface, and a set of individual adjacent to each other concentric rings of small thickness, having a cross-sectional shape of the prisms of the special profile. This he achieved small thickness and light weight lenses. Fresnel lens in the past, have found application mainly in large lighting fixtures type marine beacons and today is actively used, for example, in projectors, in viewfinders of cameras and flashbulbs. Small thickness of such a lens allows you to release them in the form of plastic transparent rulers bookmarks, which are usually used by people with low vision read small text.

Remember this lens made me following. All good new mobile phone is almost a computer in your pocket! In addition, he successfully performs the function of the notebook, and the book, which is always at hand. But it is a “carminati” inevitably have to pay by the size of the screen – it is in any case much smaller than even the tiny netbooks. And if in the reading of text files the ability to increase the font, many of the books in PDF are just scanned pages, and then have to put up with very small letters.

However, to fit the page to the screen width and thus to facilitate the reading of “microtext” managed just by using the above mentioned Fresnel lens purchased in the stationery shop. But the entire line, which is convenient to read Newspapers and magazines, we do not need a small screen mobile phone is much smaller. So it is enough to cut from the center line of the rectangle, about the size of one and a half times the visible area of the screen. And not to keep all the time the lens and to release the arm of the big staples can make a handy bracket that allows you to attach the lens at the desired distance from the front of the phone. 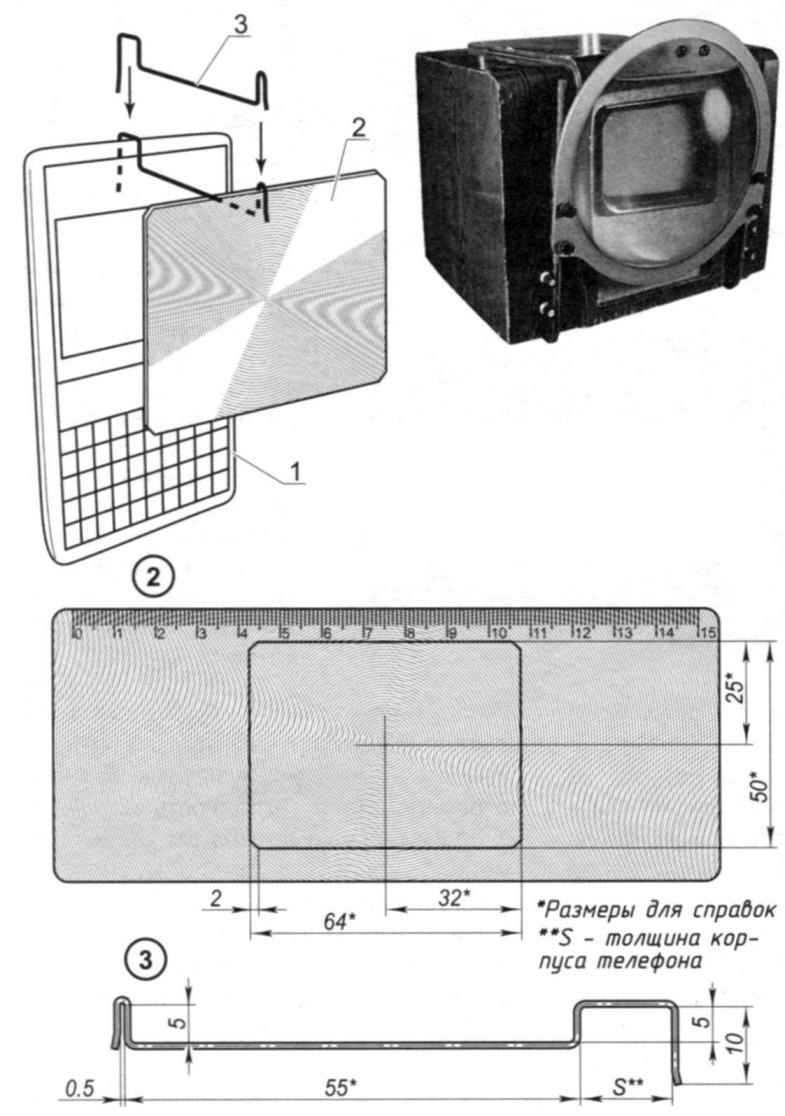 For different models of phones the size of a mini bracket may vary, they should be find experimentally. However, it should be remembered that increasing the distance from the lens to the screen, though enhances the effect of “approximation”, but entails also the necessity of increasing the size of the lens for comfortable reading, as the length of the bracket. As a result, a long wire attaching it can swing and vibrate, which is undesirable. Given the parameters the author to see optimal screen size 48х36мм. The ends of the wire should have a little bend or to hide in the segments of PVC pipe, to prevent them from scratching the phone and the lens.

This design in a disassembled form (available in cropped plastic cover from the same range) easy to store, for example, in the wallet. Then it will always be at hand as the phone itself, and at any moment can help you not only to read books, but generally when working with small text and images, and when viewing video on the phone screen. It is the view videos through the lens and resulted in the title of the Association with the first domestic TV KVN-49, which also came with a special lens to enlarge the TV image. Well, as the saying goes, everything new is well forgotten old.