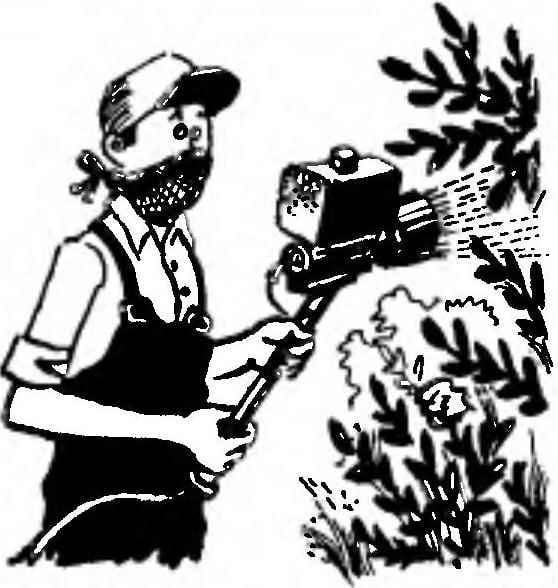 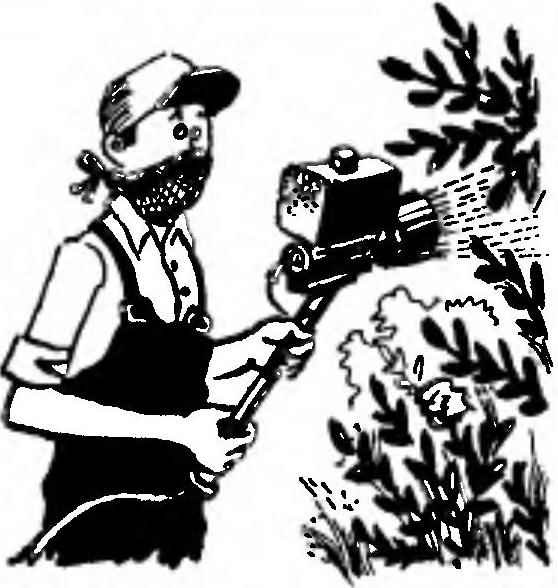 Cup dispenser for spraying plants. Chemical method of plant protection from pests, diseases and weeds currently and in the foreseeable future remains the main. It is implemented often through spraying of crops with water solutions of pesticides.
Of how well the spraying depends on the efficacy of the drug, the rate of its consumption, pollution of the environment. Therefore, the Central question of the practice of application of chemical means of plant protection is the treatment droplets of optimal size (the smaller the better) that entirely depends on the design of the sprayer.

Manufacturer of sprayer for this treatment is a daunting task. But I still managed to design and make a simple pan spray directional, is used to produce a monodisperse aerosol cloud from aqueous solutions of pesticides used in agriculture. The cloud produced by the rapidly spinning Cup atomizer has the shape of a twisted cone (like a whirlwind), the larger base of which is directed to the object of spraying. Drops from such a “whirlwind” gets even out of reach for other types of sprayers place — for example, the back side of the leaves of plants.

The body spray — cut polyethylene pipe with a length of 140 mm, an outer diameter of 40 mm and a wall thickness of 2 mm serves as a frame. On the body and inside it compactly assembled all parts and components up to the tank with a working solution (option for spraying taller plants).

Parts and components, both core and supporting, a little bit. The main — motor shaft and the spray Cup. 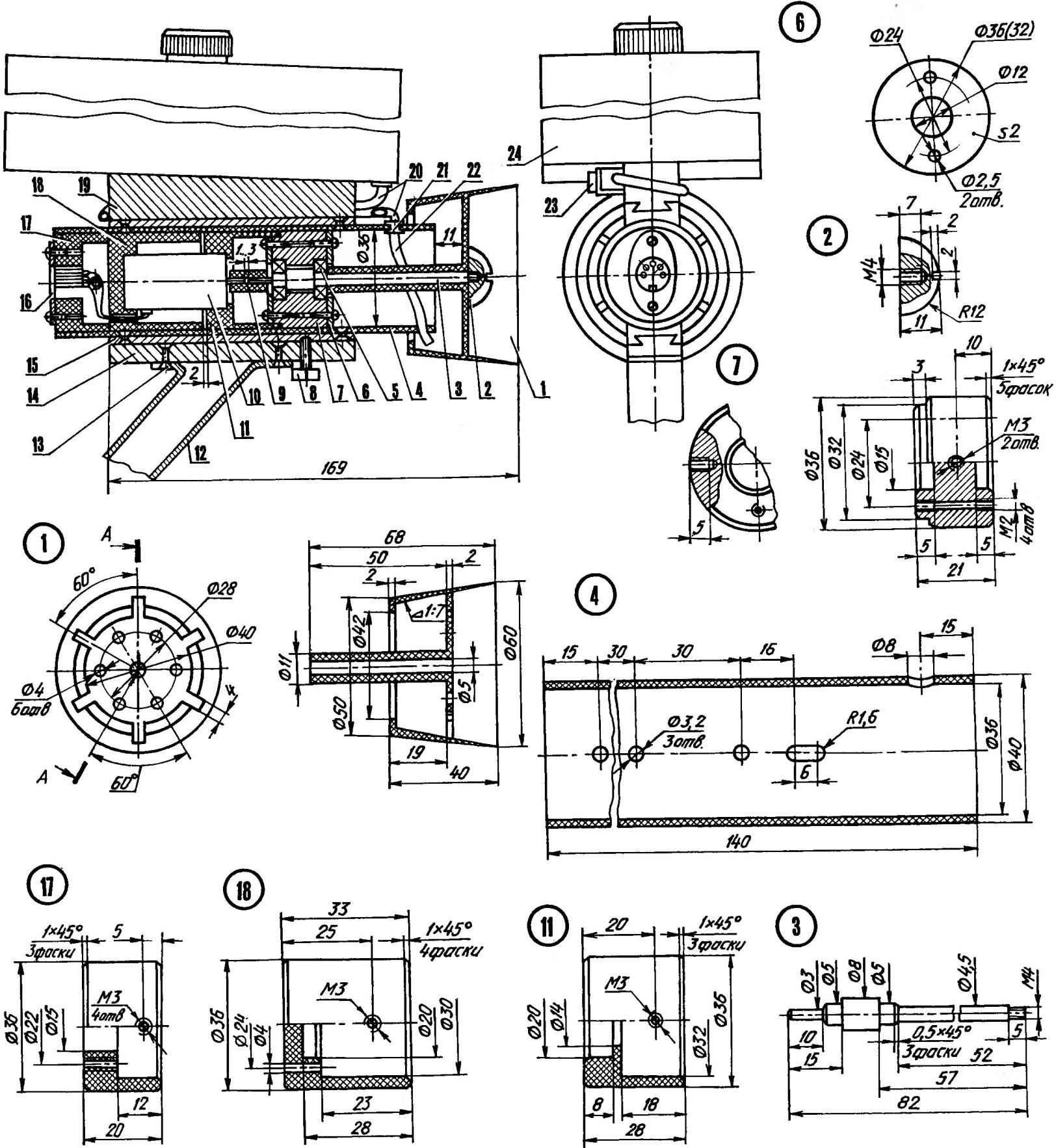 The motor is mounted in the housing, two bushings and clamped between them. Each bushing is fixed against rotation by screw M3. The voltage is supplied to the electric motor via plug connector from the household radio. The connector is mounted in a plastic sleeve and attached to her butt with two screws M3. The same two screws itself bushing is fixed in the end housing.

Steel shaft, stepped, cantilevered. Its axle is mounted in two roller bearings 25 series, mounted in a single aluminum housing with opposite sides. The bearings are clamped in the sockets steel washers, secured to housing with two screws M2 each. The bearing housing together with the shaft placed into the body spray and fixed it with two screws M3.

The motor shaft and the cantilever shaft are connected by a tightly stretched tubular coupling made of vacuum rubber.

A special conversation about the spray Cup. This item randomly caught my eye among the various recyclables (I don’t even know what it machine or Assembly). But she gave me the manufacturer of Cup dispenser. The revision was made are very minor —just cut out the bottom and drilled through the axial bore in the rod and the flange (“fungus”).

Wishing to produce such a dispenser find Cup ready, it must be hard. Much easier to choose the appropriate separate parts — the Cup and “fungus”, joining them on glue or doing in the wall of the Cup grooves for the spokes of the flange, then carefully close up the gaps in the slots that they did not leave the working fluid.

External equipment — Bush rod, and the capacity to handle a high plant — dock to the housing of the sprayer parts with the connection “dovetail”. To do this, the top and bottom of the casing is riveted with aluminum rivets with countersunk heads are identical parts with the groove. The response details with the comb attached to the abutting nodes of the rod bracket and capacitance, and the first— riveted, and capacity — glued. In this case the connecting part of the capacity is made higher and with a slope outside (without comb) surface forward (in the direction of the Cup).

The dimensions of the auxiliary parts mounted outside the housing, is not critical, the configuration is apparent from the Assembly drawing, detailed drawings of these parts to result does not make sense.

The particle size of the “whirlwind” is regulated in two ways: the first is the change of the flow amount of the working fluid, the second supply voltage to the motor, which leads to a change in the speed of rotation of the Cup dispenser and fragmentation of liquid drops of various size.

The principle of operation of the Cup dispenser the following. The working fluid from a feed tank is fed by gravity through the tube against the inner wall of the rotating Cup. Here, the liquid spreads under the action of centrifugal forces in a thin film and is thrown from the cone, hence the sharp edge of the Cup with fine droplets of approximately the same size. The most complete formation of the aerosol cloud occurs at a distance of 200-250 mm from the edge of the spray Cup. 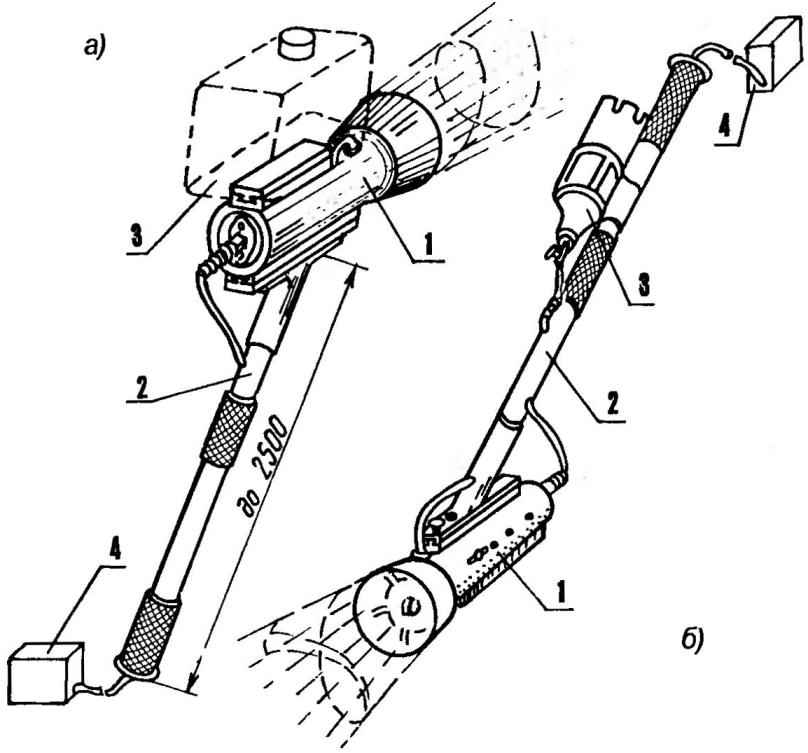 The Cup sprayer is in the working position is located horizontally relative to the ground, but can be installed at a slight angle (approximately ±30°) without significant loss of quality of operation of the device.

The advantage of rotating sprays is that they are almost not clogged, have a small number of parts and robust motors allow you to use them for several years without repair.

The device is designed so that, having made few such modules, you can automate the spraying of plants, providing the flow of the working fluid and the regulated power supply that will allow the operator to move away from the aerosol cloud from harmful chemicals.

The Cup dispenser can be successfully used for painting, spattering paint and varnish materials (LKM). The device also allows spraying of fluid viscosity in the range of 18 to 25 on the viscometer VZ-246 at a temperature of 25 ± 10 °C.