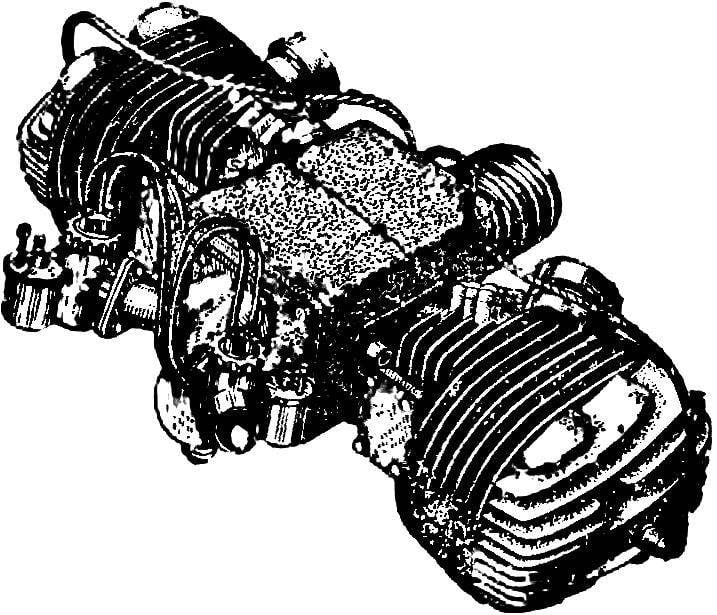 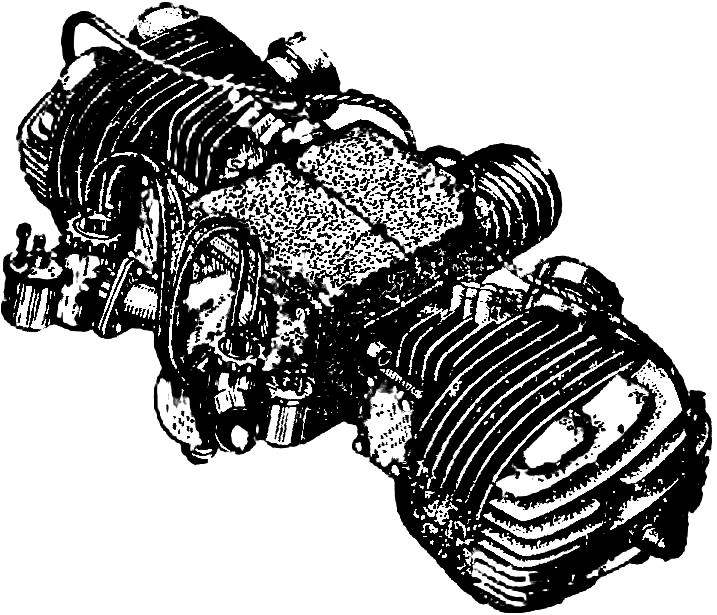 To find a suitable engine for snowmobiles — the task is far from simple. Series motors in many aspects (in particular, power density) does not satisfy the Amateur designers. This makes certain enthusiasts to elect quite difficult, but the right way is to create motors own designs, using components and parts of serial.
The editorial Board has provided the pages of the magazine designers and enthusiasts, discussing the principles of design of engines, their technologies, So, of particular interest to the readers of the article that generated the F. Kiseleva (“M-K” No. 6, 1978), which describes the technology of manufacturing of reciprocating engine — motor having a number of advantages compared to other engine circuits. Today’s article A. Kozhakhmetov from the city of Troitsk, Chelyabinsk region — on improving the “oppozit”.
Trinity at city station of young technicians, we have built several snowmobiles and karts. The main engine used tractor of puskach PD-10. What we just did with these motors: and crossed them, and mated, but the desired results to achieve and failed. Great weight, size, relatively low power density, and forced variations and unimportant life. Tried to increase power by improving the scavenging, but it didn’t help.
The fact is that on most two-stroke engines the inlet of combustible mixture to the crankcase is controlled by the piston. The window it opens, not reaching 60-65° before top dead center (TDC), and closes it later the same 60-65° after its passage. Thus, the intake phase is symmetrical relative to TDC, and there’s nothing you can do, since the relative position of the edges of the window and the piston with its both up and down are one and the same.
For improvement of cylinder filling mixture inlet it is desirable to begin 130-140° before TDC and ends after 40-50°. 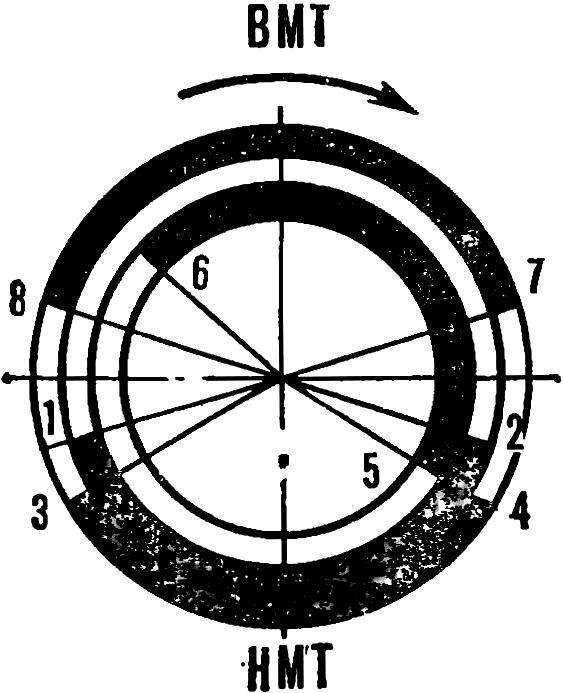 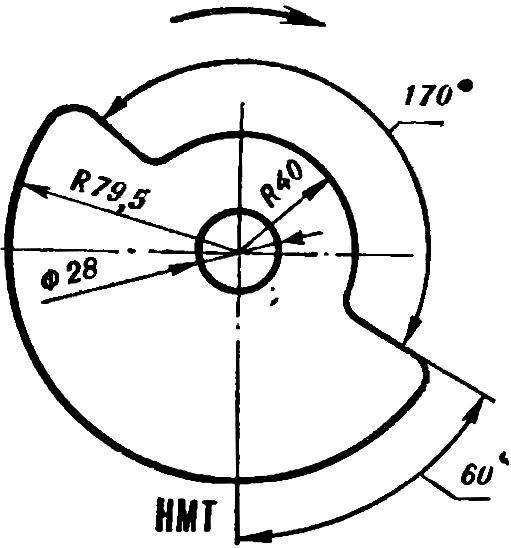 Fig. 2. Spool.
And these motors have a disc valve or reed valve, controlling intake mixture. They became widespread only recently. Distribution through the disk of the spool allows you to develop liter capacity 130 HP
Disc spool, mounted on our new engine, is a notched steel plate thickness 0.4—0.6 mm (steel 65G). Geometrically it is two articulated circular sectors of different radii with smooth transitions between them. The disk is placed on the crankshaft journal and rotating in a narrow gap formed by the left half of the crankcase and valve cover. The cover and the crankcase split the inlet nozzle of the carburetor is made of duralumin tubes and attached to the flange of the crankcase cover.
Disk spool works in the following way. During the rotation the moment of coincidence of the cut disc and the holes in the cover and the crankcase. This opens the access of the combustible mixture into the crankcase from the carburetor. The duration of intake is determined by the width of the cutout in the disk. In our engine, the intake phase is 170°, but, apparently, the optimum angle makes sense to pick up empirically, that is, gradually increase the cutout in the disk, at the same time the tachometer measuring revolutions of a crankshaft of the engine. Thus it is possible to achieve optimal phase of intake, and hence maximum torque on the motor shaft.
On the crankshaft is a tapered disc is mounted by a bushing and fixed it with the nut. The sleeve is seated on the left of the crankshaft bearing journal and can navigate through it in the axial direction between the body wall and a lid spool. The gaps between the spool and the cover and between the spool and housing should be in the range of 0.4—0.5 mm, they are governed by the selection of appropriate spacers.
If the installation of such engine on the aircraft, where essential weight design, it is best to use magneto type M-42. When using the motor on the ground (water) transport it makes sense to use either a contactless ignition or conventional, breaker. In the latter case can take two shestovytsya coil from motorcycle “Java” or “IZH” and the associated generator (for example, Г424 with relay-regulator RR-330). 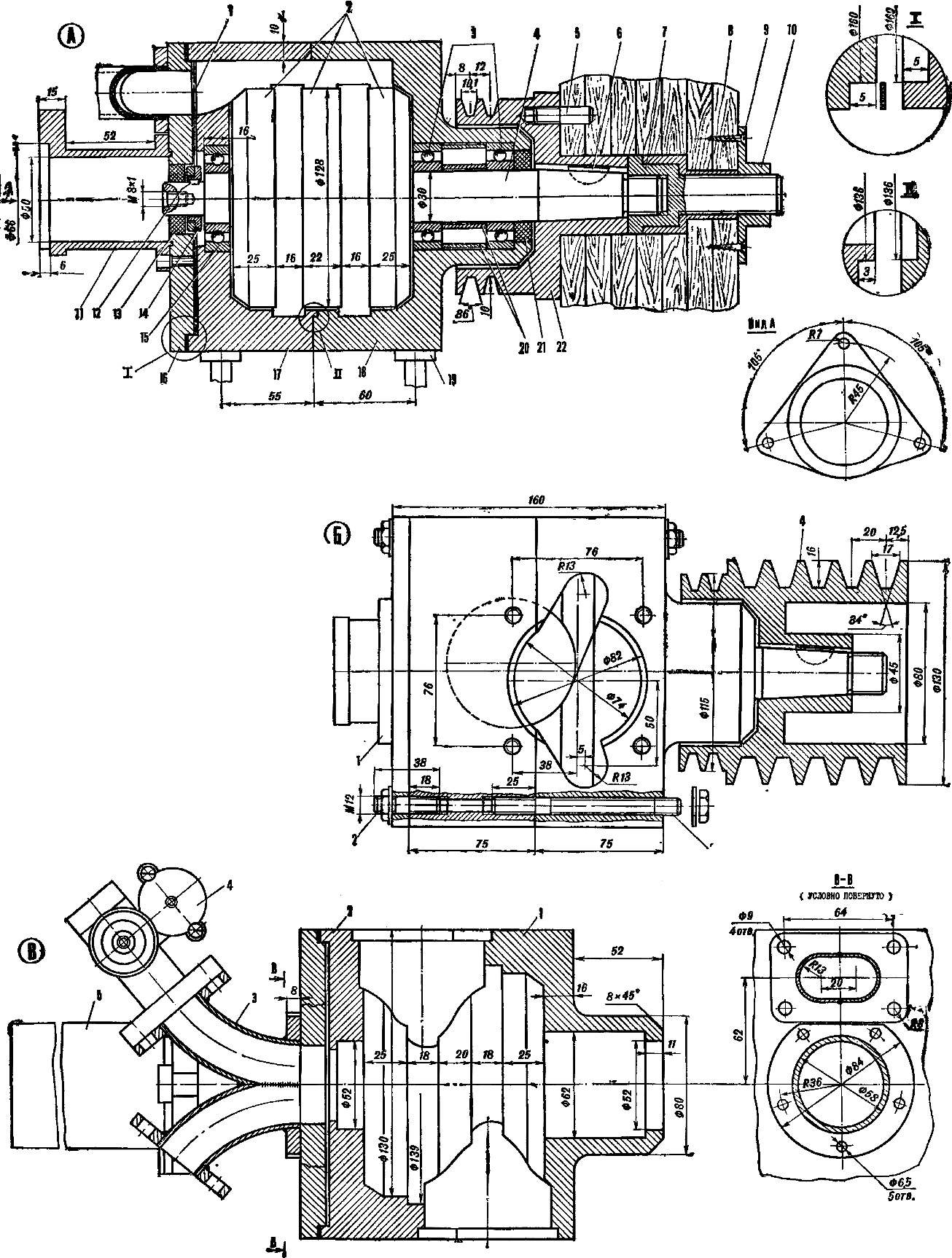