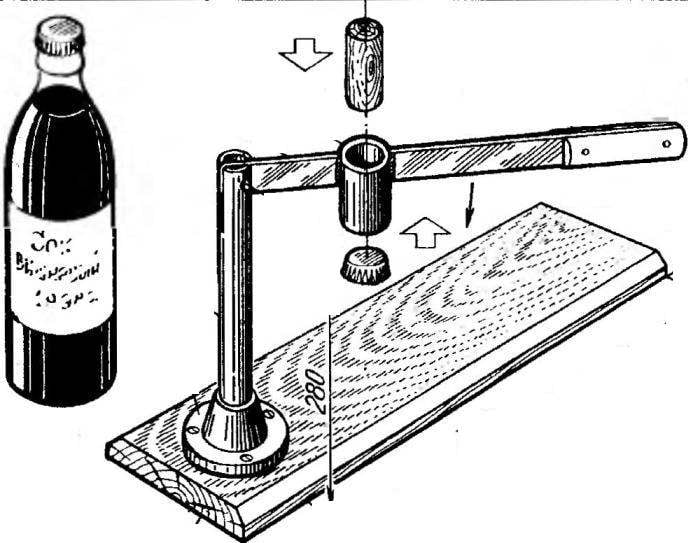 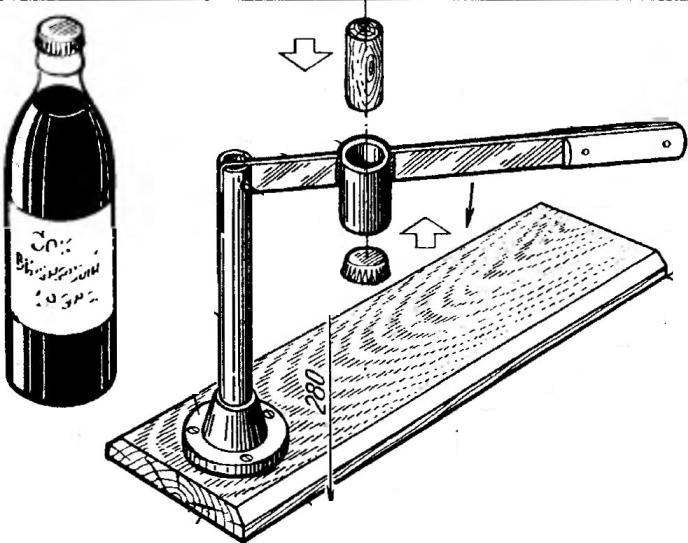 Every family make preparations for the winter: jams, pickles, juices, syrups. It happens that they catch the hostess off guard: no cans, lids, not satisfied with the capacity. Some are trying to harness the imported plastic bottles of 1,5 — 2 l no Words, Tara is very convenient. If the contents of the bottle to add a preservative, juices, syrups, wines are stored for very long. But to sterilize such containers is very problematic.
However, the border still widely use glass bottles as a capacity of 0.5 l and 0.33 l (“Euro-bottle”), they sell juices, beer. Such bottles are relatively cheap, are available in all settlements and in sufficient quantity. A glass bottle can be stored in the standing and in the supine position (pyramid). It is also convenient to use her homemade contents: fresh juice is consumed immediately after opening the bottle, as its capacity is small (to store home canned foods in the open for a long time is not recommended).
However, commercially there is no stoppers for such bottles (Cranbrook). We offer to recycle that tube has already been used (even bent) — after appropriate sterilization. If you have not accumulated them over the winter, ask at your nearest kiosk or the cafeteria. To seal their bottles, we offer you to make a simple device. Its purpose is force to compress the neck of the bottle the corrugations on the kronprobkoy — the so-called “skirt”. This is done using a small bushing-swage, which is mounted on the lever. The sleeve is made from a section of water pipe with a diameter of 3/4 inch and a length of 60 — 80 mm. One end of it inside worn down and the internal diameter successfully match the dimensions of Kronprince. A swage used in 2 — 3 admission, turning the bottle around its axis. It so happens that the kronprobkoy gets in the swage and rises with it. To avoid this, you need a pusher to hold the tube. Pusher is a wooden cylinder, which easily enters the swage.
details of the device are quite simple, their dimensions are not critical: the base is made of boards, the stand — out section of water pipe with a diameter of 1 /2 inches, at the top it is made of cut for the shank of the lever and drilled a hole for the axis. The stand is fastened to the base with a flange, support feet, or other suitable means. The dimensions in the drawing shown conventionally, as the types of bottles differ. The example is designed for bottle type “Cheburashka”, which on the neck has two beaters. 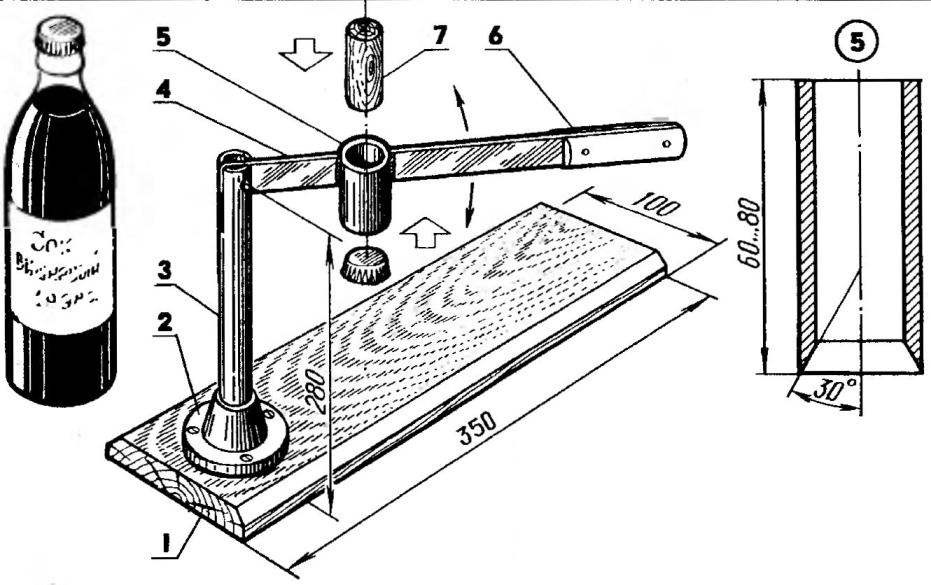 Device for closing of bottles:
1 — base; 2 — flange; 3 — strut; 4 — lever (rotated conventionally clockwise); 5 — bushing-swage; 6 — handle; 7 — pusher.
Use the device in the following way. First wrapped the cork on the bottle, push the lever down with one hand and another stick pusher inside the swage. Then kronprobkoy stick pusher, swage and lift, turning the bottle around its axis, repeat the operation several times. Stoppered bottle check for leaks, turning upside down for a while.
What can be stored in such a container? There are almost no restrictions: it is the juices and compotes, and syrups and even homemade beer and wine.
N. SMOLIN,
Chelyabinsk